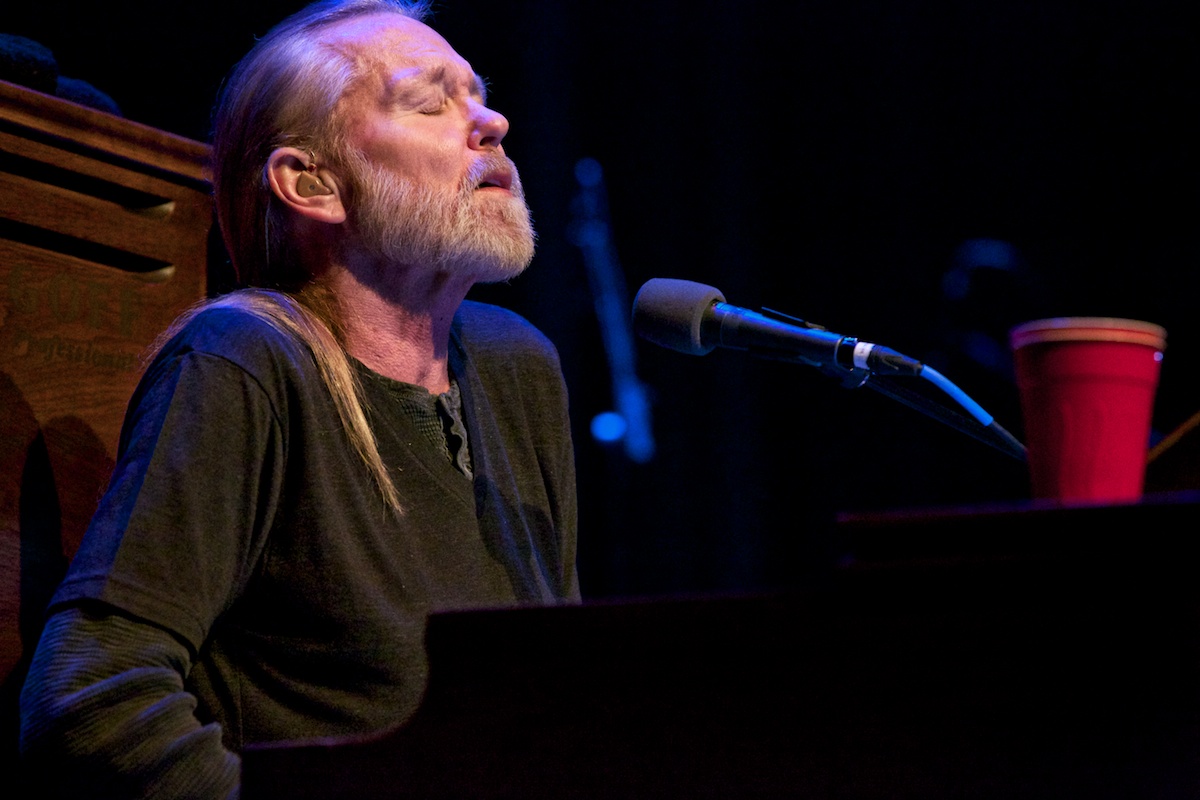 Gregg Allman’s life is a road well travelled for sure. As much thriver as survivor, his blues have the resume to match (40+ years on the road and hard knocks you wouldn’t wish on anyone). Last year’s T-Bone Burnett produced “Low Country Blues” is a seminal record that embodies the sum of Allman’s musical lives in roadhouse ramble, swampy Muscle Shoals drenched horns and his all the way at the bottom looking up vocals. You can feel the miles and hear the fight breaking out in the back.

Like many of his musical peers, Allman has gone open kimono on his life and times with the autobiography “My Cross to Bear” released last year, continuing a trend of influential musicians (Keith Richards, Neil Young, Pete Townsend, most notably) sharing internal reflections, creative insights and the occasionally rowdy it could only happen to this rock star story. Sure, there are more salacious aspects one would expect in these memoirs (and, yes, Richards “Life” is hard to put down), but more powerfully, there is honesty and a peak behind the curtain from guys with less sand in the hourglass and their eyes on the clock. In Allman’s case (as he told Spinner last year), his was not so much of a book as an ongoing journal over 30 years. Seeing Greg Allman on the talk show circuit openly engaging on his life, his approach to the blues, his marriages, his run-ins with former band mate Dickey Betts, was disarmingly real and surreal at the same time. But what struck me was an almost vampiric need to keep playing as long as he has a pulse. That urgency is not unique to Allman, but it is palpable and poignant. 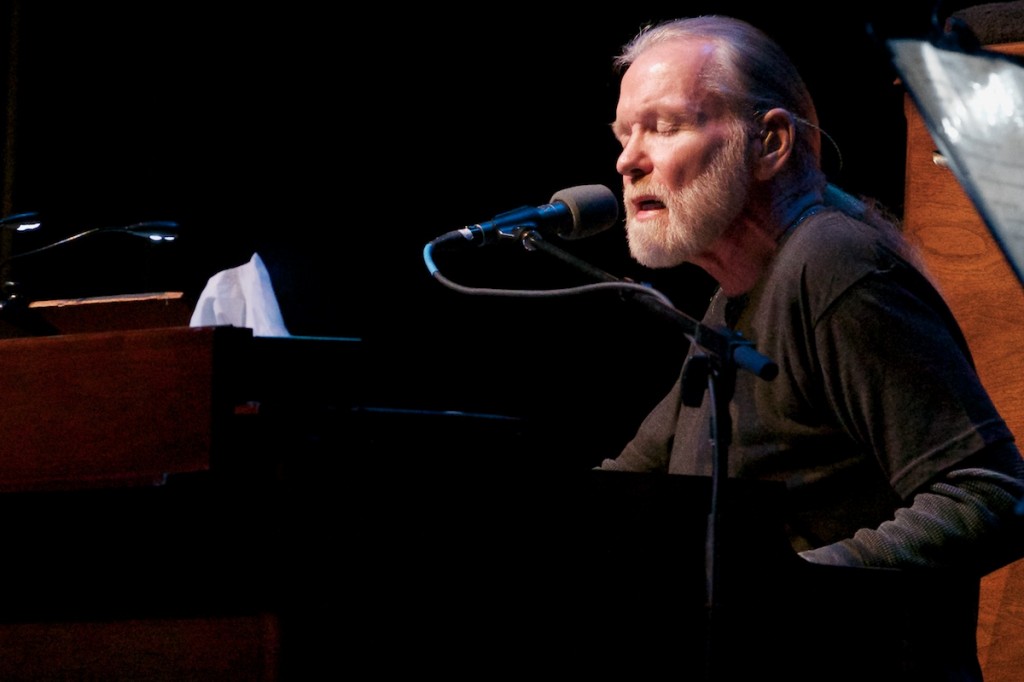 Greg Allman behind his B3

Just after the release of “Low Country Blues”, Allman played the Blues Tent at the New Orleans Jazz and Heritage Festival in 2011, competing against the orchestral strains of Arcade Fire from the neighboring Acura Stage. It was a sweaty, satisfying and enthusiastically received set with three-piece horns that moved between rearranged ABB material and Allman solo tunes including several from “Low Country Blues” (Allman’s JamBase interview before the Fest is good reading).

Allman had some health issues last year, but he has been road ready for a while with a swing through the south including a New Year’s Eve stop at the House of Blues in New Orleans and a date at Nashville’s hallowed Ryman Auditorium. His Royce Hall performance is part of a California/Nevada stretch that includes San Diego, Vegas, San Francisco, Napa and Tahoe.

Royce Hall is a gracious space (think more jazz and classical, than roadhouse blues) that gave the evening a relaxed feel, and there was a lot of Allman joy in the air as the band strode onstage to B.B. King on the PA. The current band features Scott Sharrard on guitar, Bruce Katz on keys, Jay Collins on horns, Steve Potts on drums, Jerry Jemmott on bass and Floyd Miles on percussion and vocals, and the 2-hour set was a group effort from start to finish. Allman alternated between guitar and his B3 throughout the night and anyone expecting ABB intensity from a Greg Allman show should check their expectations at the door. 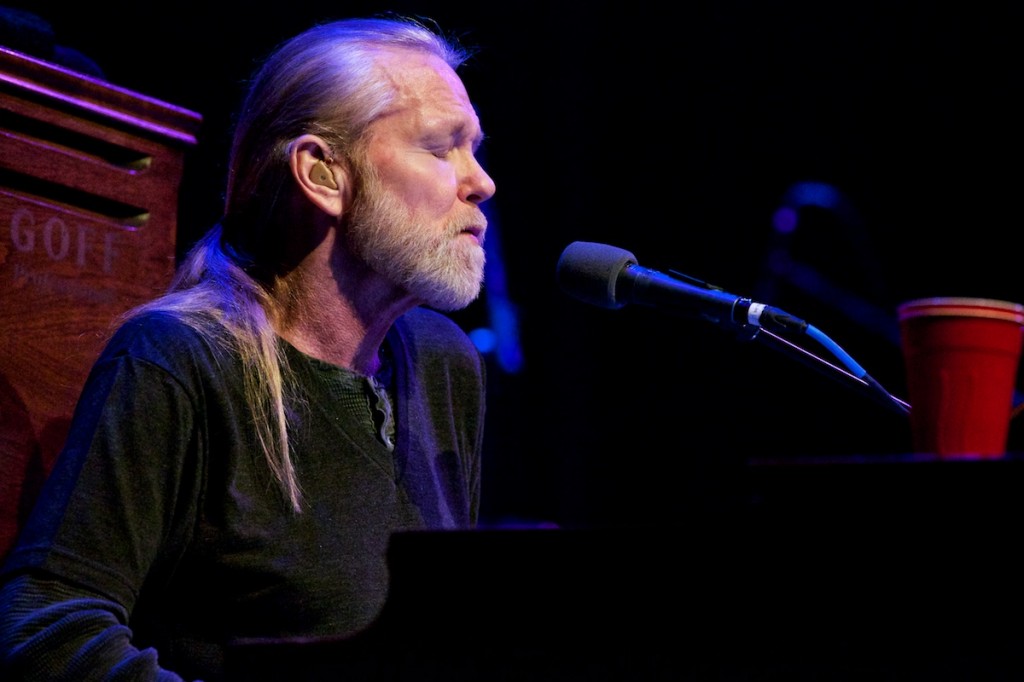 The love for the bandleader was apparent after the opener, “I’m No Angel” with a (male) yell of “you sound sweet, Greg!” from the back rows. About a third of the 19 song set was ABB material and the rest from the deeper Greg Allman recorded and touring catalogue, ranging from a cover of Jackson Browne’s “These Days” (with an appropriate weary tenderness) to crowd pleasers “Melissa” and “Midnight Rider”. “Statesboro Blues” appeared early in the set and showed some kick to the delight of the ABB diehards. Floyd Miles, who Allman has “played with since he was 14” took the band through the blues flavors of Muddy Waters “I Can’t Be Satisfied” and two from his 1994 release, “Back to Daytona”. Allman’s daughter Layla held her own on a cover of Elmore James’ “The Sky is Crying” and Dad dug a little deeper swapping vocals with his daughter. “Wasted Words” was punchy as all get out, with Bruce Katz’s spiky keys, Jay Collins tenor and Scott Sharrard’s fretwork fully jelling. Guest bassist Tal Wilkenfeld stepped in for “Just Before the Bullets Fly” (from Allman’s 1988 release of the same name) and “Midnight Rider”(Wilkenfeld is a phenomenal player who was going toe-to-toe with Jeff Beck at barely 20). “Bullets” was another high point of the night and Wilkenfeld’s presence certainly took it up a notch. “Rider” had Collins layering in flute lines and Katz added just the right touch of Rhodes work to evoke the frozen in time feel of the tune. A slow burn of “Whipping Post” was far from the tempest of the ABB (of any era), but Collins’ sax, the rhythm section of Potts and Lamott, and Sharrard’s wah-wah, brought the set to a satisfying finish. 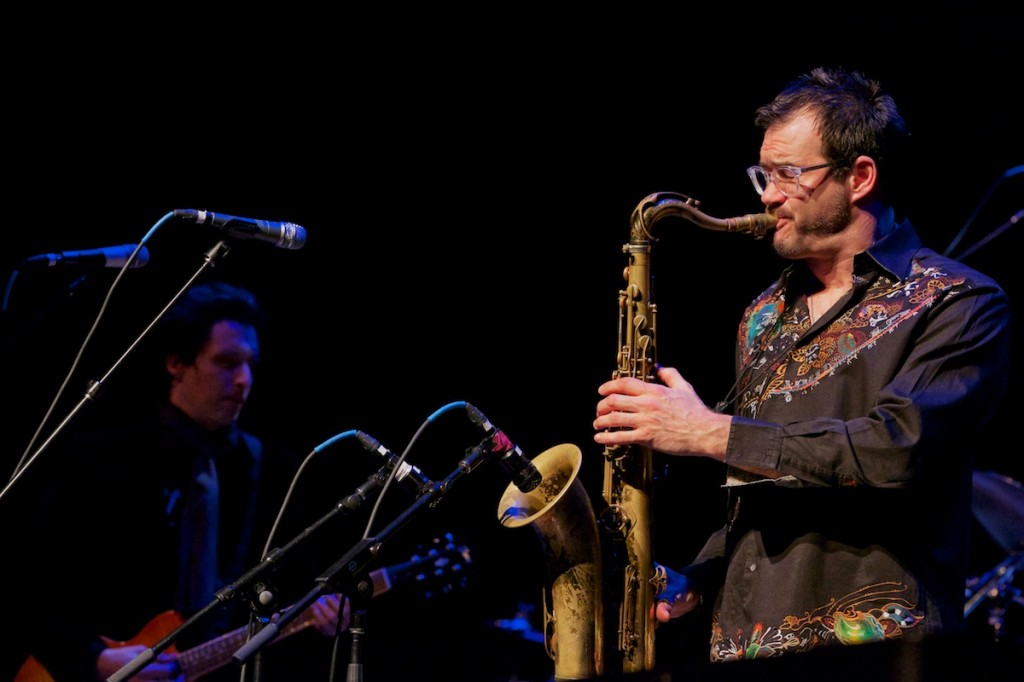 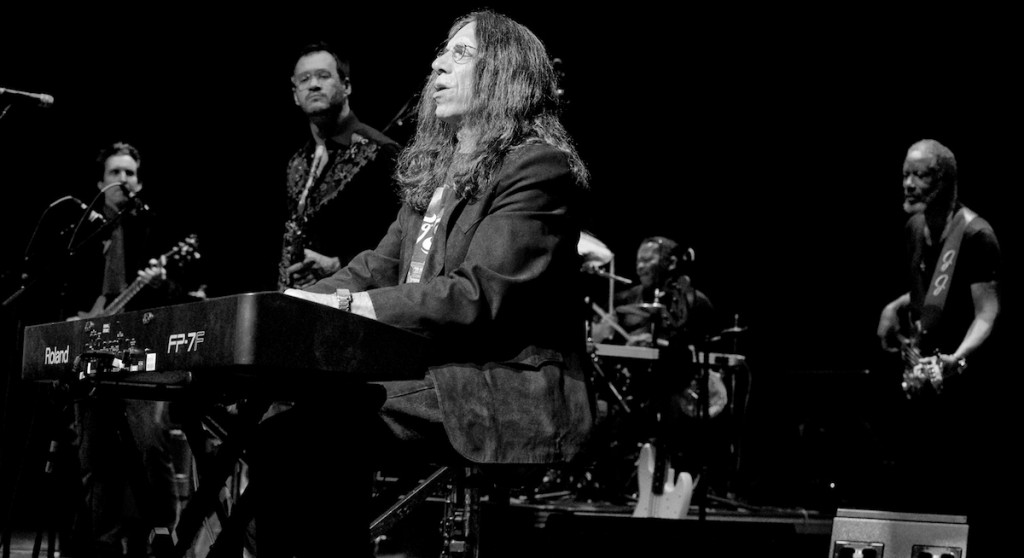 Bruce Katz out front with the Greg Allman band 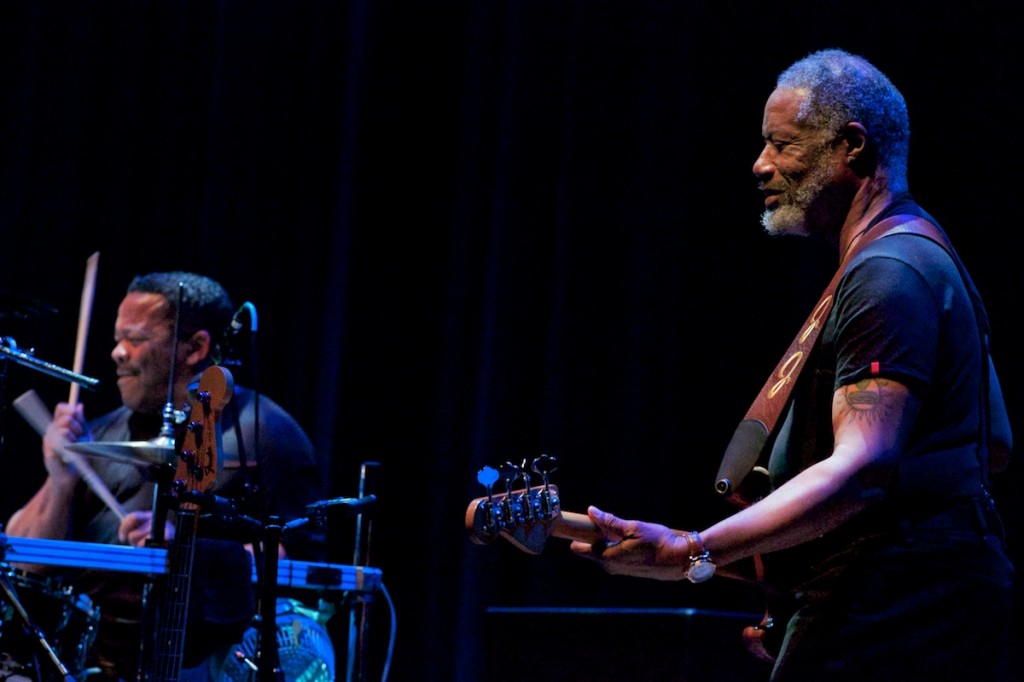 The rhythm section of Jerry Lemott and Steve Potts

Allman came back with “Floating Bridge” (the Sleepy John Estes cover that opens “Low Country Blues”) and seemed to find something extra in this song about being pulled under the muddy river. “One Way Out” put the show to bed, another horn-centric arrangement of a classic ABB tune and a chance for Sharrard to flash his slide work. Any player in Sharrard’s spot has to beat down the ghosts of ABB slingers past and present and Sharrard brought the right amount of fire, fuzz and respect to the Allman repertoire throughout the night.  After all, the ABB is a guitar oriented bunch and the Greg Allman Band is not. Sharrard rose to the challenge. 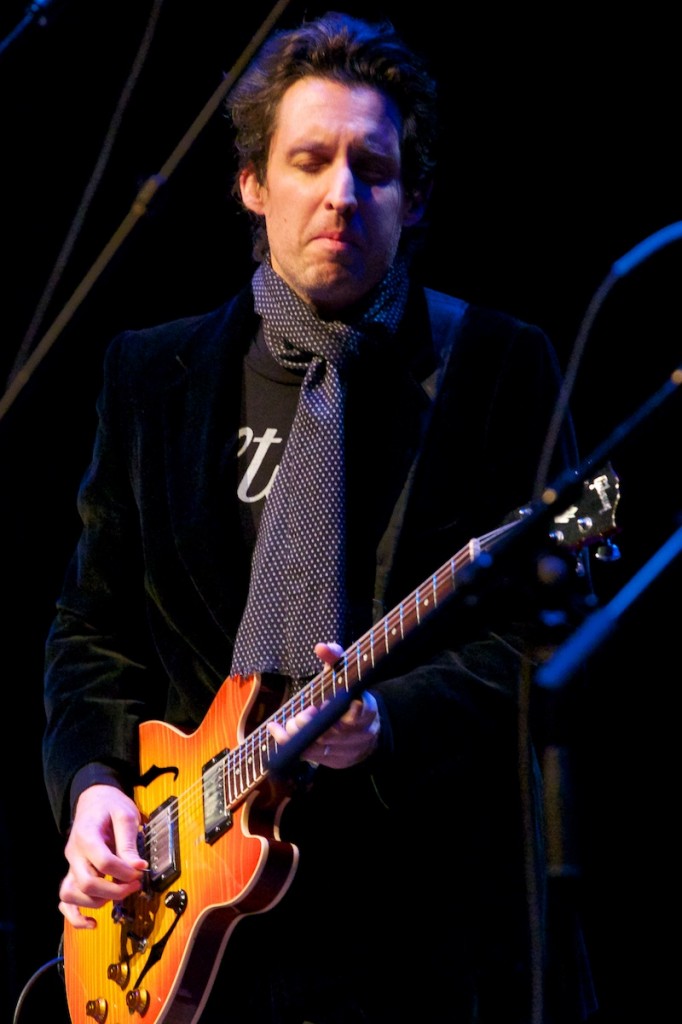 Allman has hit some rough road along the way and parts of his life read like lines from much of the Elmore James material he plays. While the evening was more subdued then raucous, Greg Allman appears to be on his game and the affection of his fans (not just ABB fans) has only grown. There’s thriver and survivor in all of us. That’s what makes the blues so relatable. Greg Allman is living proof. 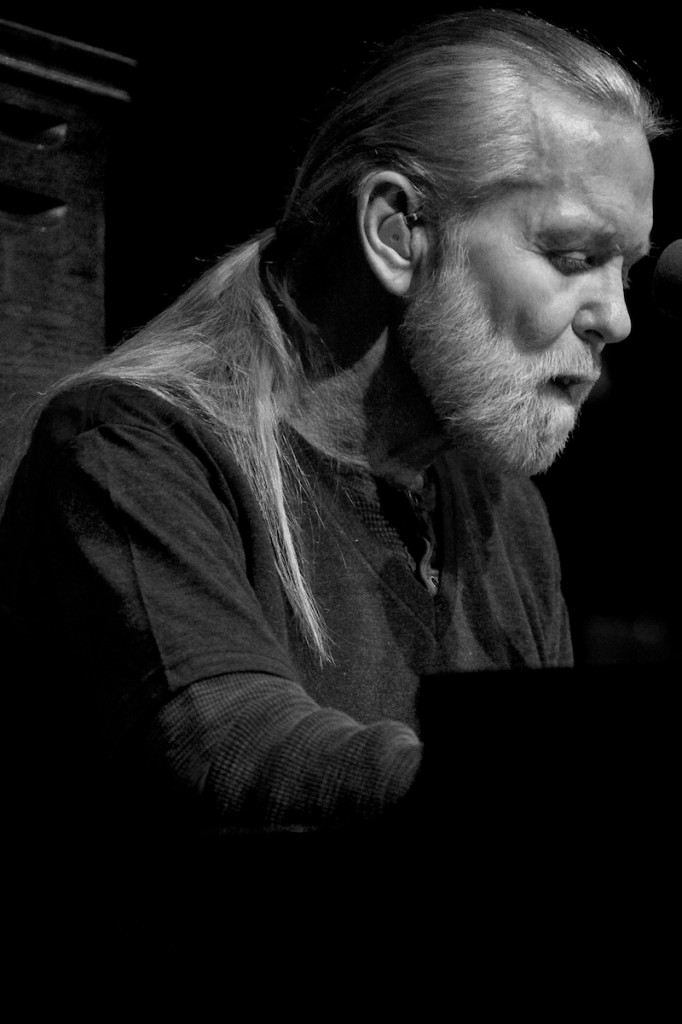