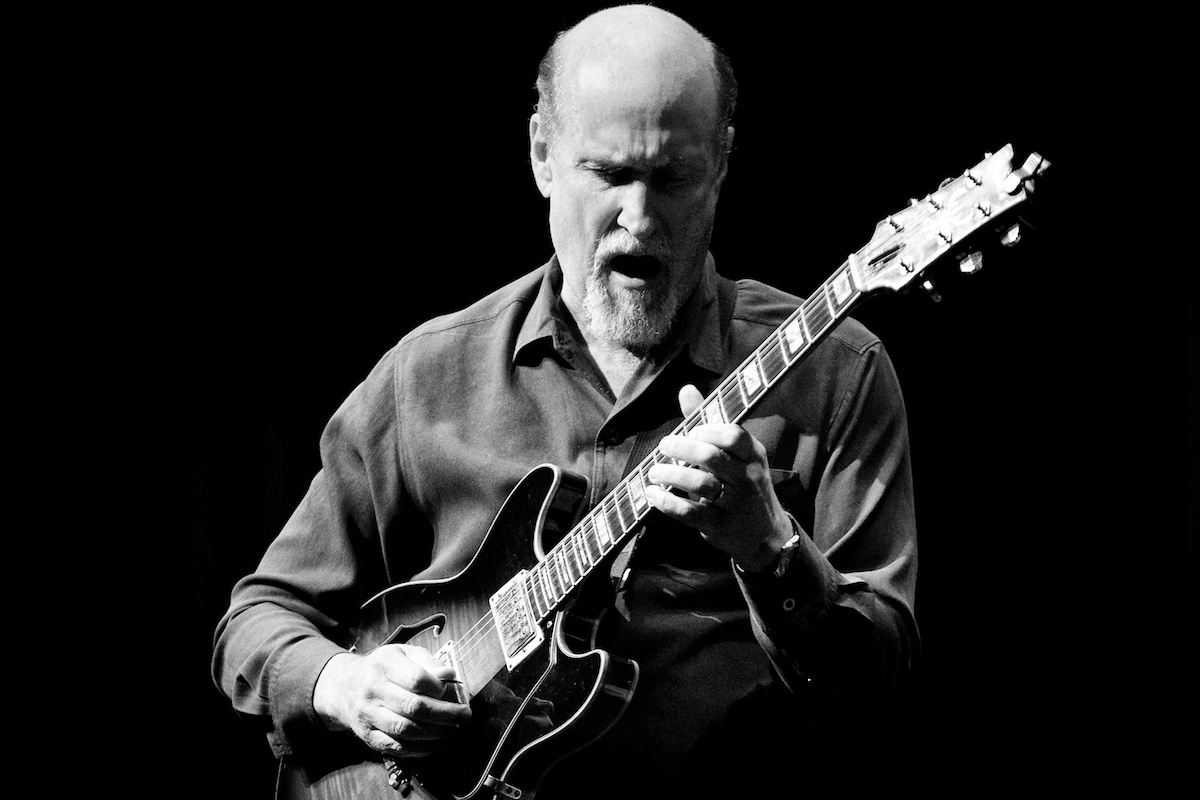 The 6th annual Angel City Jazz Festival is as unique as the city that bears its name. Multi-venue, multi-media and highly eclectic, predictable only for its unpredictablilty. Not necessarily qualities you would attach to this tentpole town. This year mixed film with music, integrating episodes of the “Jazz in the Present Tense” project with live performances under the theme of “Metamorphosis: Artists on the Cutting Edge of Change”.

John Scofield’s Uberjam Band and Dave Holland’s Prism Quartet are a mighty pairing that land in the event’s sweet spot. While some could suggest the Royce Hall double bill was more in than out, given Angel City’s edgy proclamation, they fall right in between in my book. Both are established and prolific players/composers bonded by different stints with Miles Davis. Holland’s years included In a Silent Way and the transformatively noisy Bitches Brew, while Scofield came later during the early to mid-‘80s. Davis’ electrified shift in many ways was the jazz equivalent to Dylan’s groundbreaking Newport Folk appearance in 1965 – the landscape was never the same. In Davis’ case, jazz fusion was spawned and the illustrious alum have shaped contemporary jazz ever since, with both Holland and Scofield square in the middle of it. 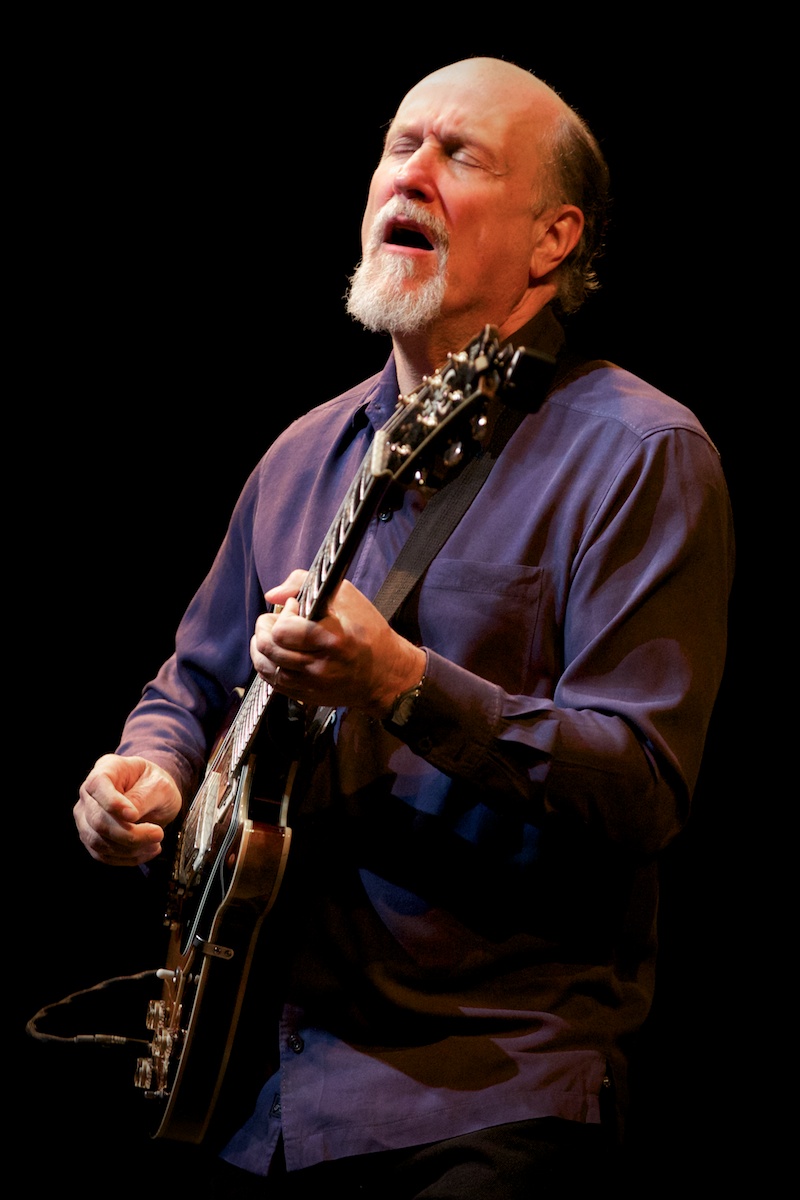 In recent years, Scofield could be found absorbing New Orleans influences with his Piety Street Band, getting all jammy with Phil (Lesh) & Friends, or engaging the free funk of frequent collaborations with John Medeski and company. No doubt Scofield is a rocker and wears it well, yet recordings such as “I Can See My House From Here” (a personal favorite) with Pat Metheny (Blue Note 1994), also display a gentler side. His current project, Uberjam Deux, is a quartet revisited a decade later with Scofield on guitar, Andy Hess on bass, rhythm guitarist Avi Bortnick, and drummer Tony Mason, and had me at the name the first time. This is a band that both digs and flies. Scofield’s hollow-body fuzz, the rhythm section of Mason and Hess at full gallop or reggae step, sprinkled with Bortnick’s unique Strat meets Mac approach. 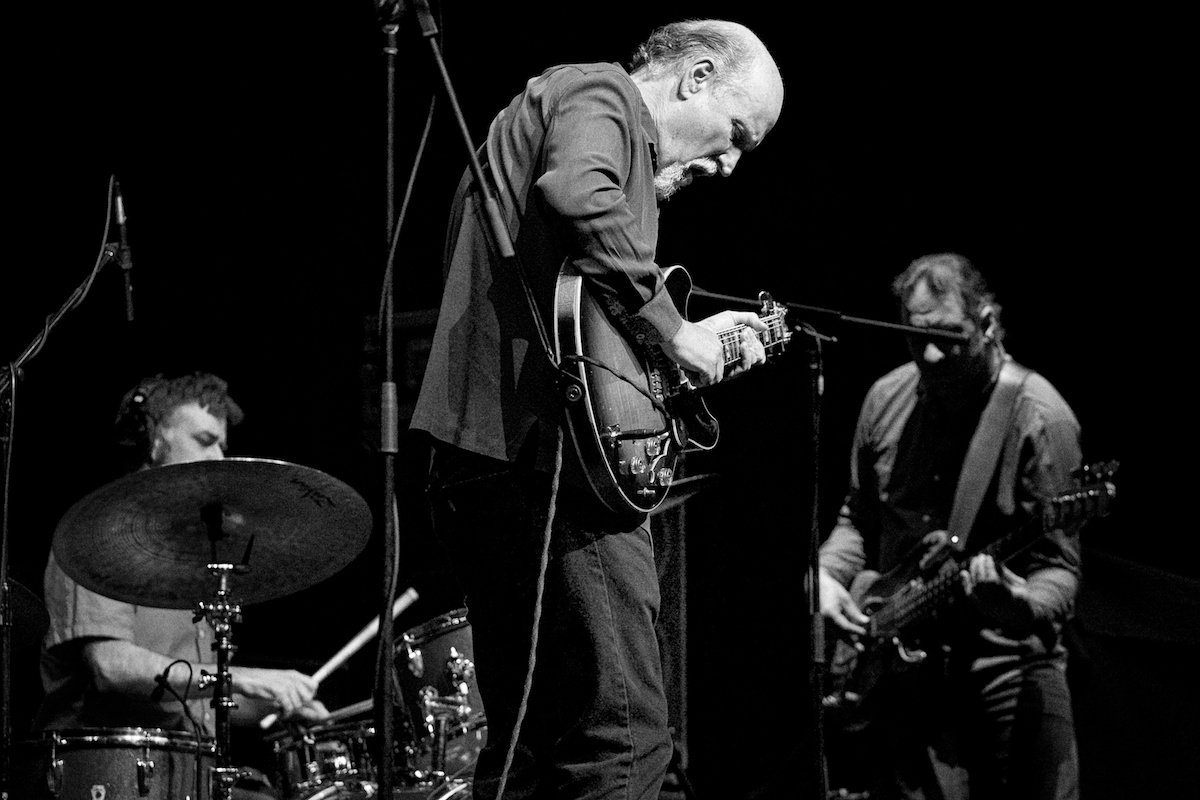 The Uberjam set pulled almost entirely from Uberjam Deux, opening with the slithery funk of “Snakedance” and the percolating “Cracked Ice”. Both rhythmic grooves from which Scofield quickly took flight. “Curtis Knew” and “Al Green Song” were so much more than homages to 70s soul icons Mayfield and Green. The former built on a sweet theme and the latter a perfect match of Scofield’s thick tone and a rhythm section on slow burn. He did both soul masters proud. “I Brake for Monster Booty”, the only tune from the first Uberjam project (and admittedly one of their more sensitive pieces, Scofield remarked), had Bortnick inserting a Rockit like sample as Point A that quickly morphed into a hot stew. Scofield and Bortnick composed most of the tunes and the electronic infusion was exciting (can’t say I’ve seen many Strat players wield a MacBook Air with their free hand, let alone with Bortnick’s panache). In fact, the sound had me reflecting on the many squelches and hums Joe Zawinul brought to Weather Report, another penultimate fusion pioneer. Character altering, textural, door opening kinds of sounds. The rhythm section, and particularly bassist Andy Hess’ rock sensibilities was also wholly satisfying. “Dub Dub” and “Endless Summer” closed the set with a Regatta era Police infused sway and Scofield finding a quiet solo moment using backward/loop sounding effects.  The literal translation of “uber” from German is “above” or “elevate” (though the English vernacular might be equally applicable here) and Uber Deux more than lived up to it. 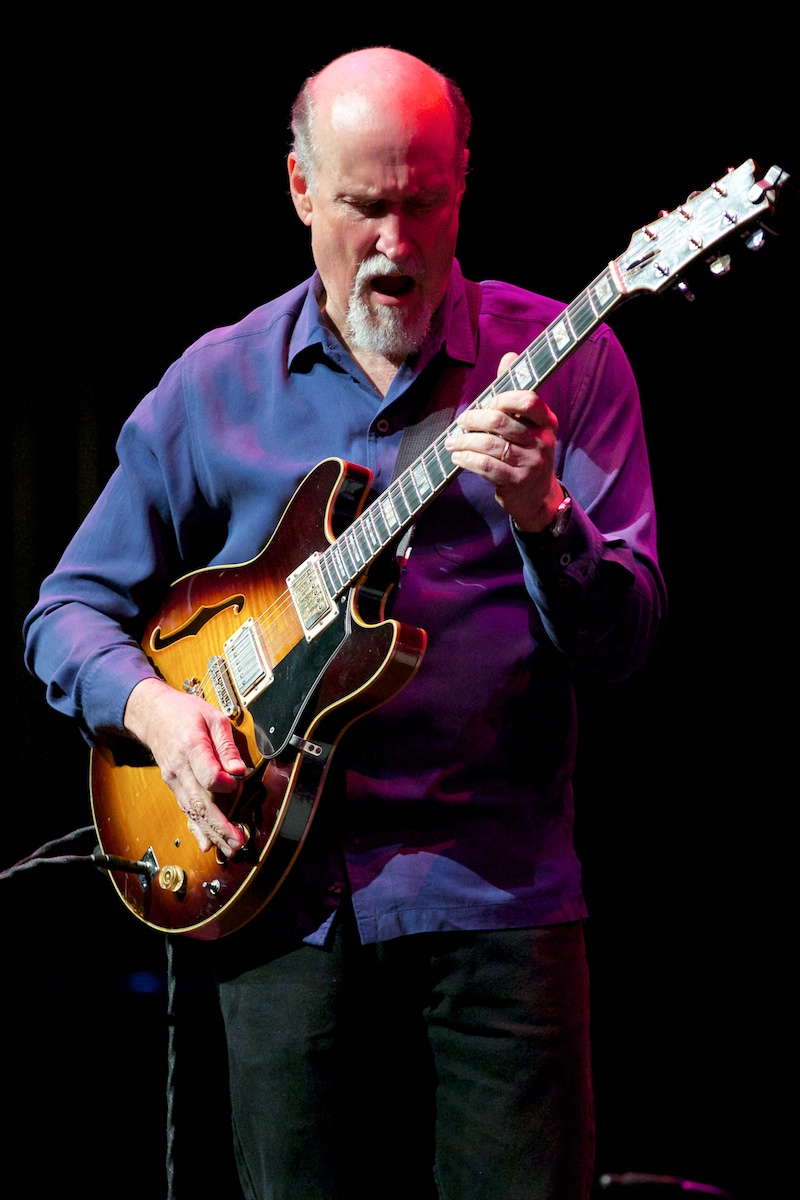 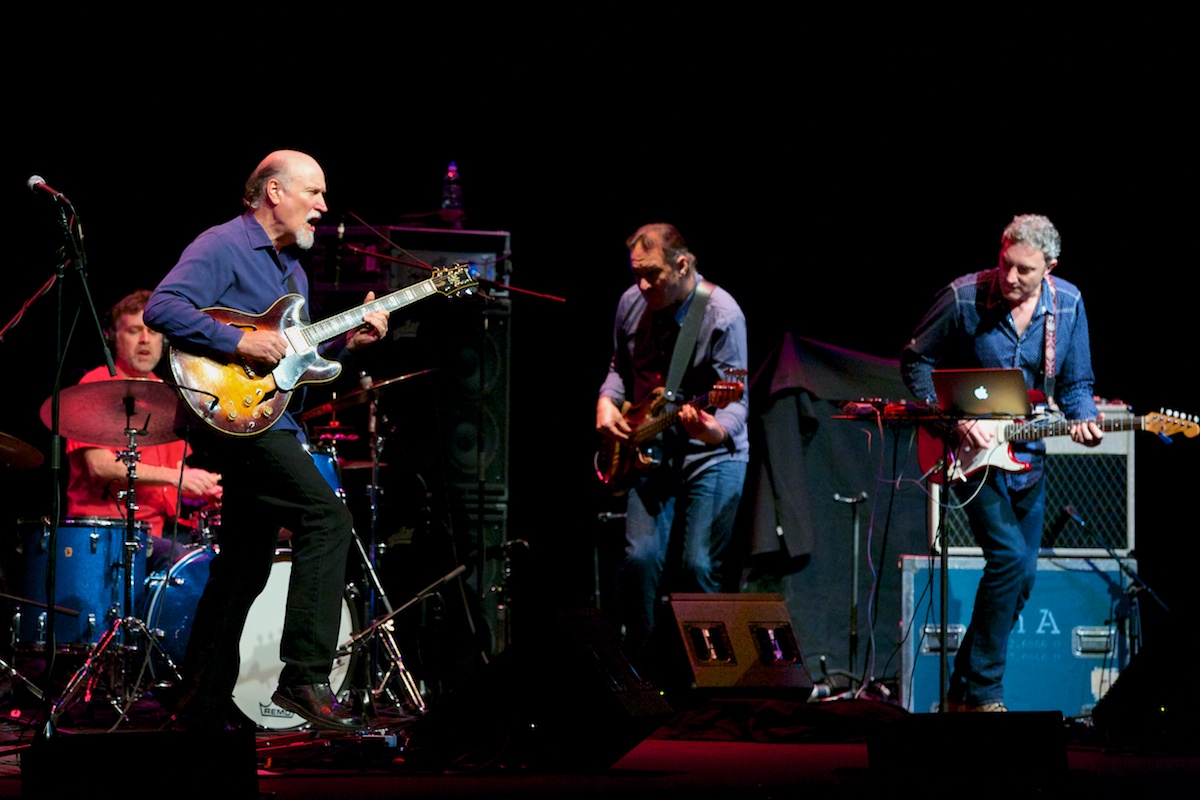 Scofield steps it up with Uberjammers Bortnick, Hess and Mason

I confess I am a recovering ECM addict (it’s a label, not a drug) and bassist Dave Holland had much to do with my dependency. Rooted and experimental, propulsive and tender, I have always had great admiration for Holland’s playing and sound going back to the mid-70s Gateway trio of Holland, drummer Jack DeJohnette (another Davis alum) and guitarist John Abercrombie.  As noted on Holland’s web site, he abides by the Sam Rivers instilled philosophy of “play all of it” and he’s certainly covered the ground to prove it. His latest project finds Holland’s upright bass surrounded by more electrified partners Kevin Eubanks on guitar (yes, Leno’s guy), Eric Harland on drums and Craig Taborn on keys. The challenge of this musical setting is especially intriguing. Hard edged fusion with an acoustic anchor (and as a recent NPR piece dialed in on, no horns and plus keys, both a rarity for Holland). 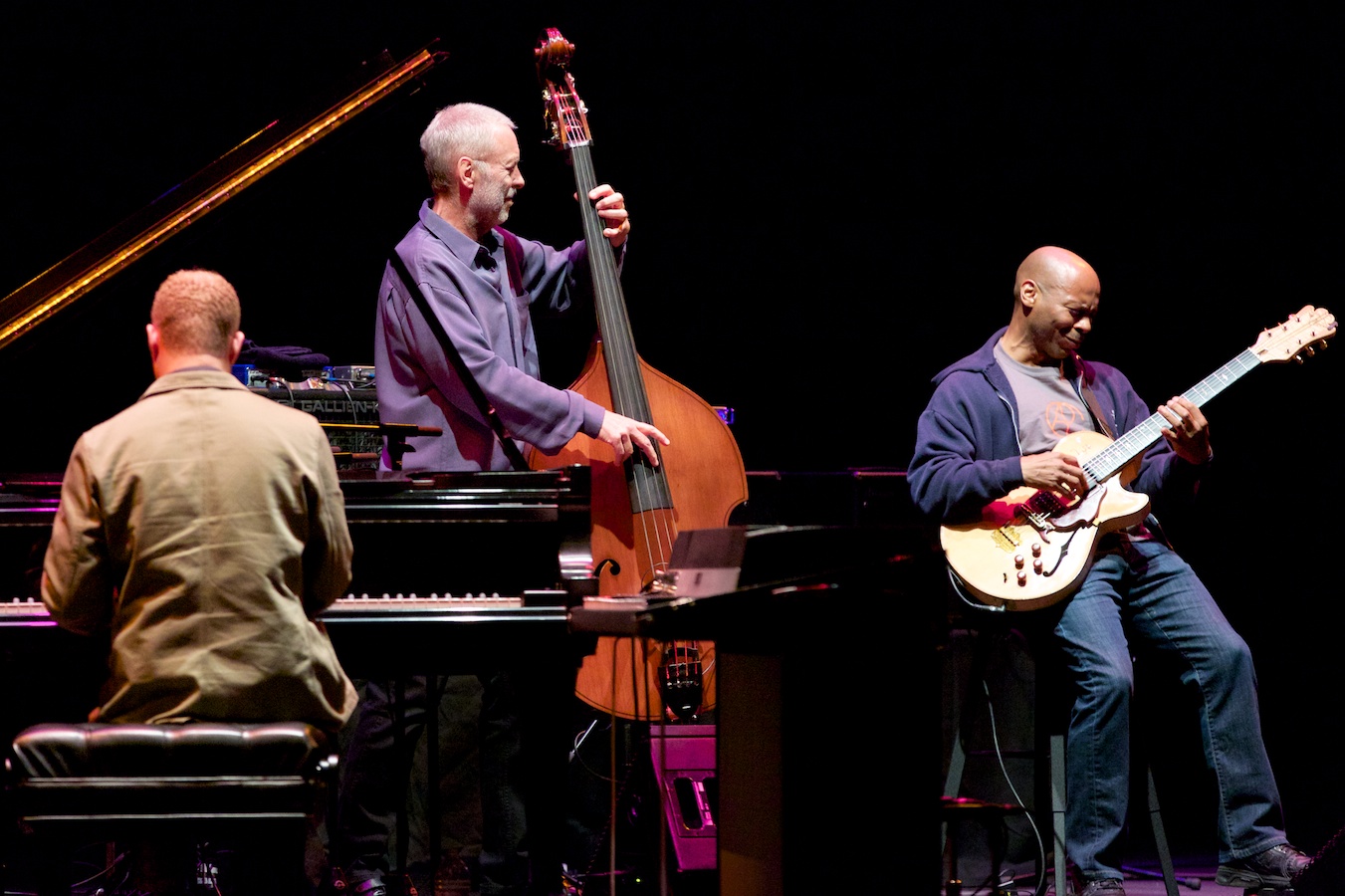 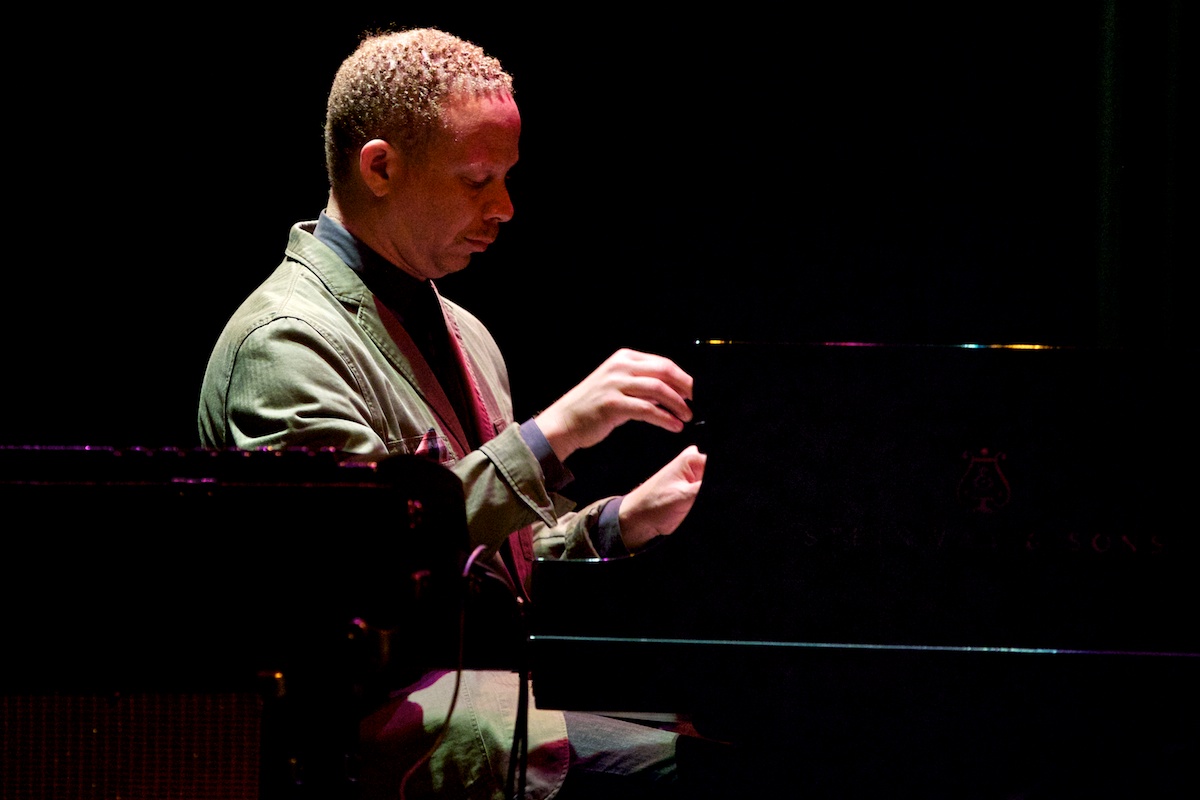 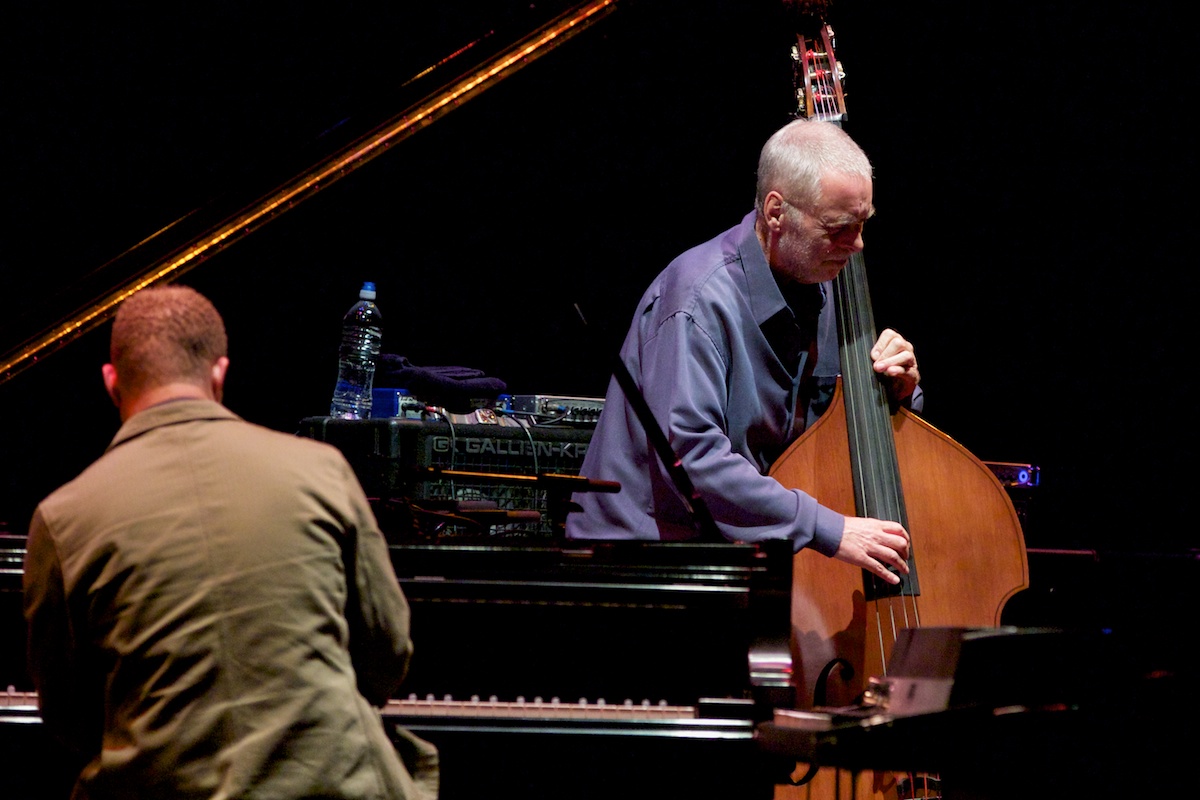 The Angel City/Royce set was deep with material from the just released Prism disk. Opening with the Holland composition “A New Day”, a powerful alignment of players, unique and whole from the first note was fully evident. This was elemental fusion stripped down and earthy. Keys and guitar ascended and descended, passing, lockstepping. Ample and meaningful solo flights all pushed and propelled by the sheer force of the Holland-Harland rhythm section. “Evolution”, a Eubanks tune, began with the composer’s percussive thumbing of his 6-string against Harland’s rim shots, the band growing muscular and angular, all the players circling DNA like around Eubanks’ front line theme. Taborn moved easily between a Steinway and a Fender Rhodes throughout the night, and his Rhodes work had a sandpaper edge that was enjoyably squonky. The evening, however, proved to be a showcase for the monster playing of Eubanks. I have not been so taken by a guitarist as I was with Eubanks in a long, long time.  Incredible runs, amazing tension/release, sizzling tone and integration to perfection with his fellow bandmates. It just kept on coming, and was for me, totally unexpected and exhilarating. “Breathe”, a Harland composition, brought the tempo down with lovely playing from Taborn that explored the belly of his grand for plucked flourishes and unusual vibrations, and had Eubanks using his pedals to bow like effect. The set closed with Eubank’s “The Watcher”, a time bomb ticker lit by the composer’s strings and Taborn’s Rhodes over a high-hat and bass driven churn that was as combustible as it sounds. A great closer that actually opens the disk. 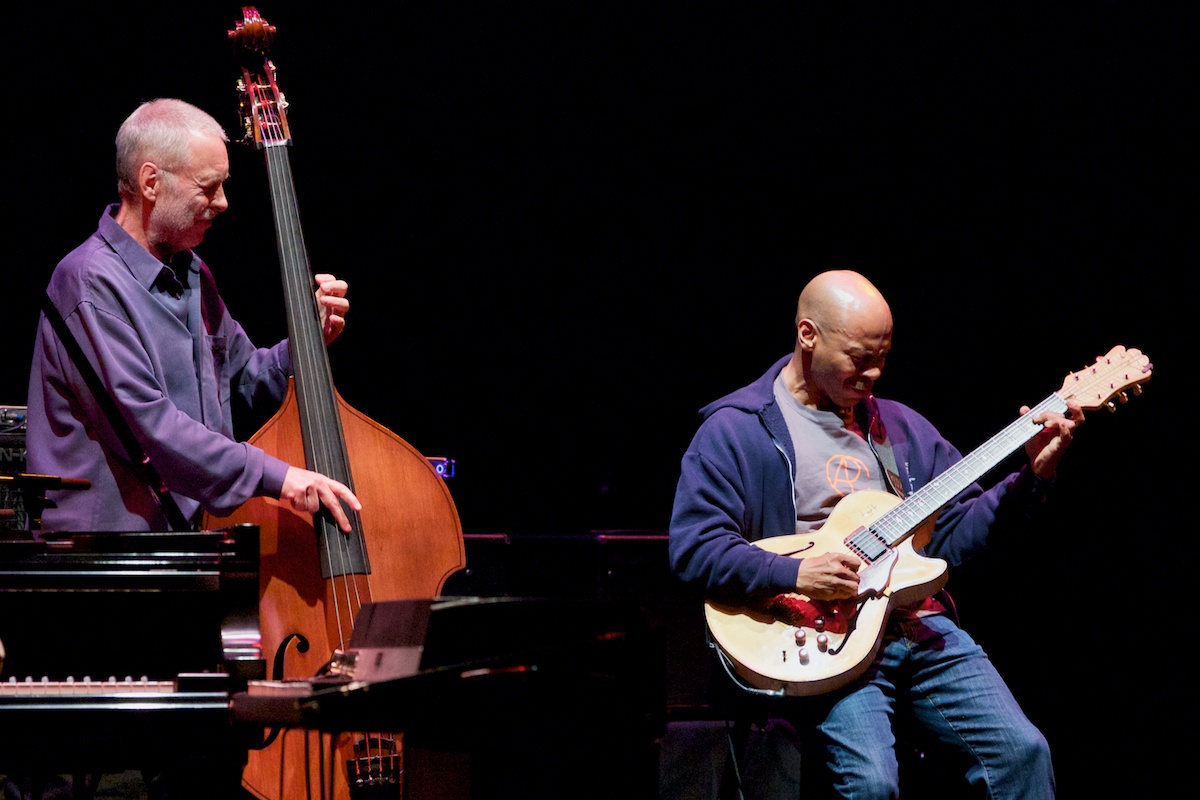 Leave it to Angel City, co-producers the Jazz Bakery, and UCLA’s Center for the Art of Performance (CAP) who made one of the best shows of the year possible. An exceptional night of music that brought pride to this Angelino.