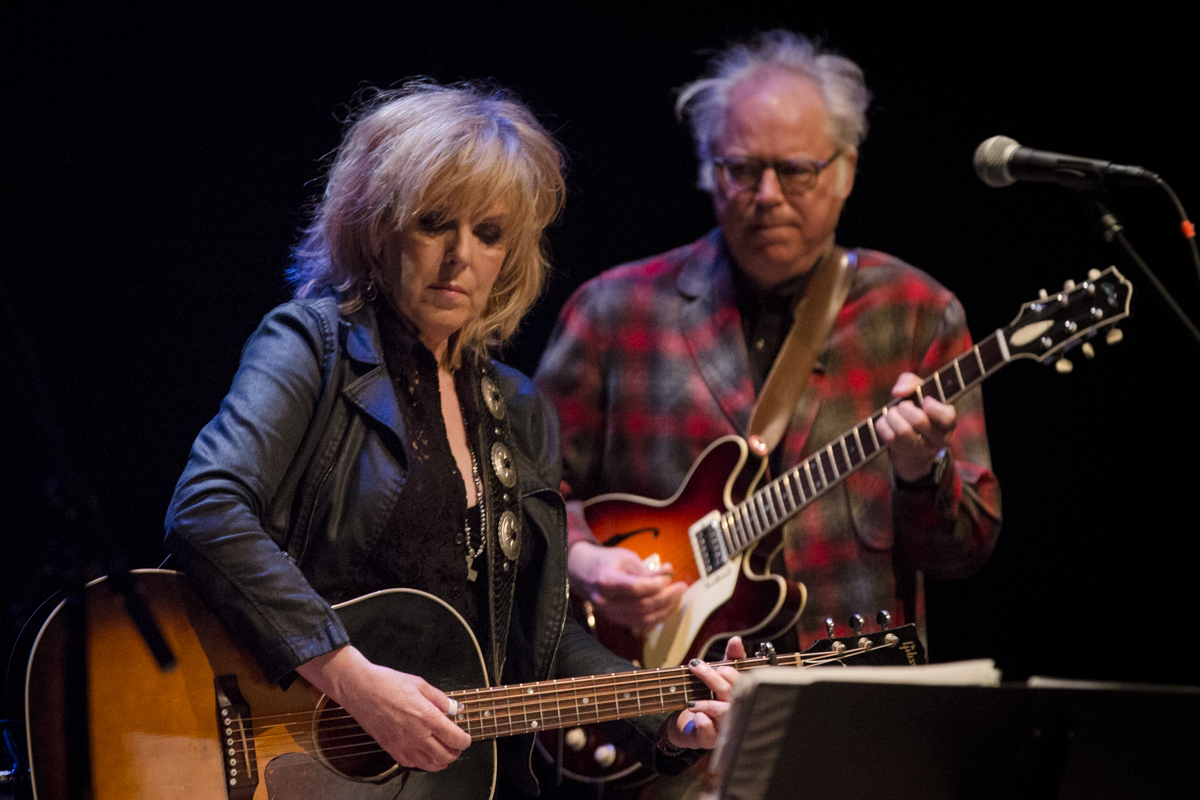 It seems many established acts are getting more artistically liberated in the deep end of their careers, or is that just me? Whether it’s an unusual union (David Crosby and Snarky Puppy come to mind in the moment), reaching way back into an early catalog, or running through entire albums from first groove to last, there’s a more untethered attitude towards a body of work than I ever recall. With a thriving concert renaissance, such deep track experiences and artistic reach have become especially rewarding for fans and bands alike (despite Billy Corgan’s distaste). Less constrained by sales and image, these can indeed be very satisfying times. Lucinda Williams knows this territory well. Long before Bruce rolled out The River from coast-to-coast, Williams played a 5-night stand at the El Rey Theatre running through her first five albums in their entirety in 2007. Yet, in the early days of her career, albums and tours had the frequency of a Terence Malick flick. Then “Car Wheels on a Gravel Road” reached the masses and deservedly expanded her audience who mostly knew her tunes, but not the writer. A mighty vein was struck and an outpouring of excellent albums followed (and continues to do so) up to her current “Ghosts of Highway 20” release.

Which brings me to a rather brilliant evening at Royce Hall a few weeks back. Jazz guitarist Bill Frisell has steeped himself in American sounds from Nashville to film and television themes, often pairing with Greg Leisz on pedal steel. Both are prominent to “Ghosts of Highway 20”, with some tracks clocking north of 10 minutes; jazz, roots and an aching heart all running together. It’s beautiful. And while I think of Williams’ best songs as full of longing and raw hurt, with a voice that’s lived every word, I couldn’t help wonder whether some of her canon’s toughness would be missed in a live setting. To the contrary, the sparkle and shimmer of Frisell and the sweet forthrightness of Leisz were as natural a fit to Williams’ material as any bandmates of tours past. While some of the harder edged songs were not so front and center, emotions were laid even more bare with Frisell and Leisz joining Williams’ compadres Butch Norton on drums, Stuart Mathis on guitar and David Sutton on bass. But the wild card of the night was the announced guest appearance of jazz icon Charles Lloyd. While Lloyd is not entirely a stranger to such crossover proceedings (his quartet was the first jazz group to play the legendary Fillmore Auditorium), he is not anyone that comes to mind in the same breath as Lucinda Williams. At all. But, mysterious ways prevail and the two met up in Santa Barbara and found a common connection that bloomed further into the evening’s performance, one not to be repeated on tour. 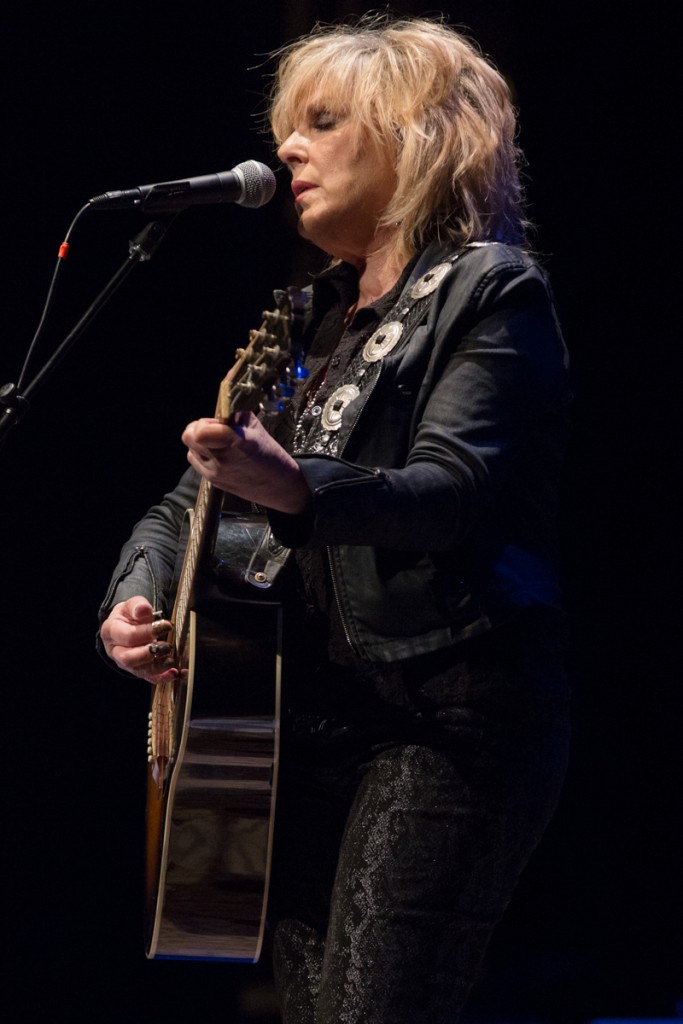 Williams’ set began solo with “Ghosts of Highway 20”, and she was soon joined by Frisell and Leisz for “Place in My Heart” and “Lake Charles”. The full band followed with “Born to be Loved” and “Ventura”, and remained the rest of the set (only Williams could make the line “lean over the toilet bowl, and throw up my confession” sound as desperately romantic as she did in “Ventura”). Frisell added a forlorn freight train feel to “West Memphis” and tangled mightily with Mathis’ growly SG on “Doors of Heaven” for more than a few rounds. “Fruits of My Labor” and “Blue” were damp with heartbreak. “Dust” the first song that dropped from the new album and with words from her late father, poet Miller Williams, had Leisz picking up a Jazzmaster and the three guitars going at it real good. Frisell raining chimey notes, Leisz’s solo strained through behind the curtain effects and Mathis not holding back. The three stringers got darker and deeper with “Unsuffer Me”. When Lloyd joined the band for “Long for Your Kiss” they took a brief nod towards the light. Now, Charles Lloyd, Lucinda Williams and “Joy” do not form an obvious sentence, but Lloyd’s presence especially turned this bitter pill into a gentler loping heart ripper and brought the set to a close. 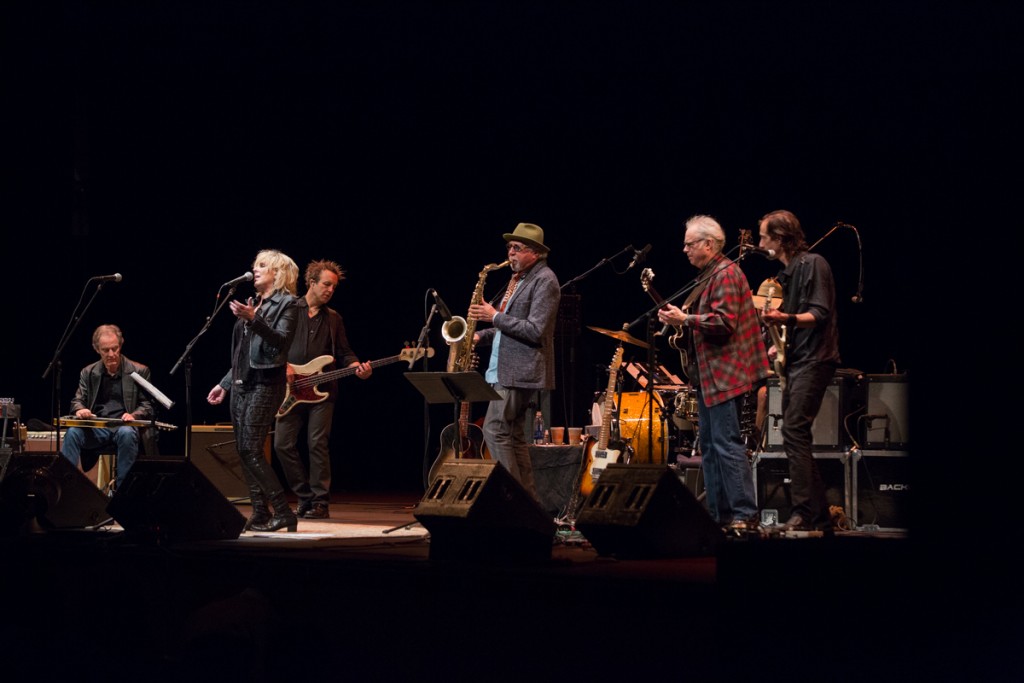 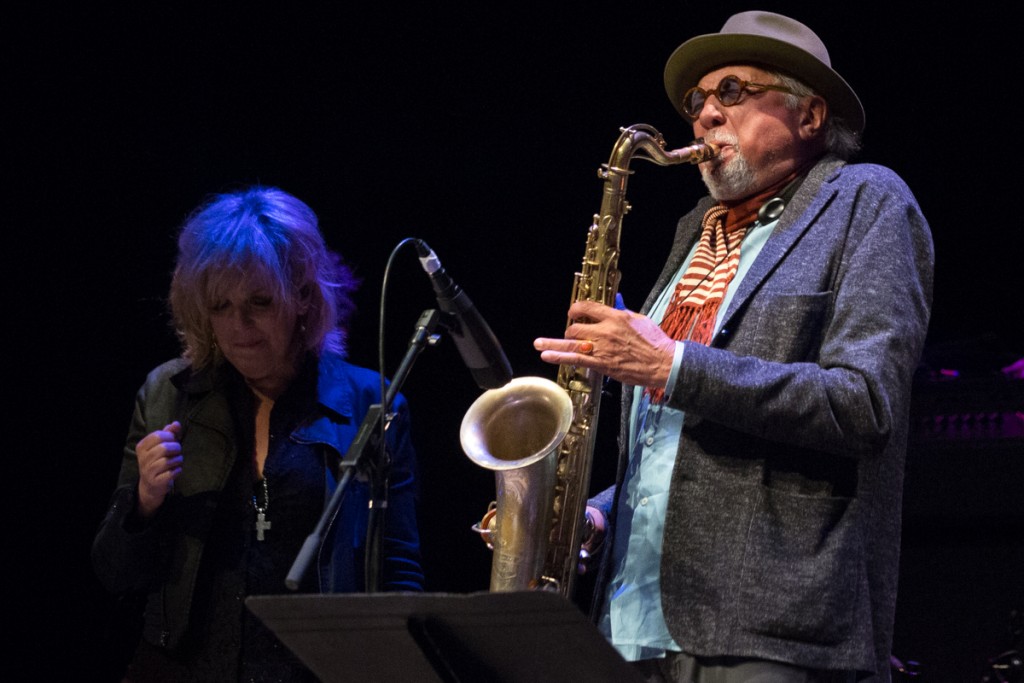 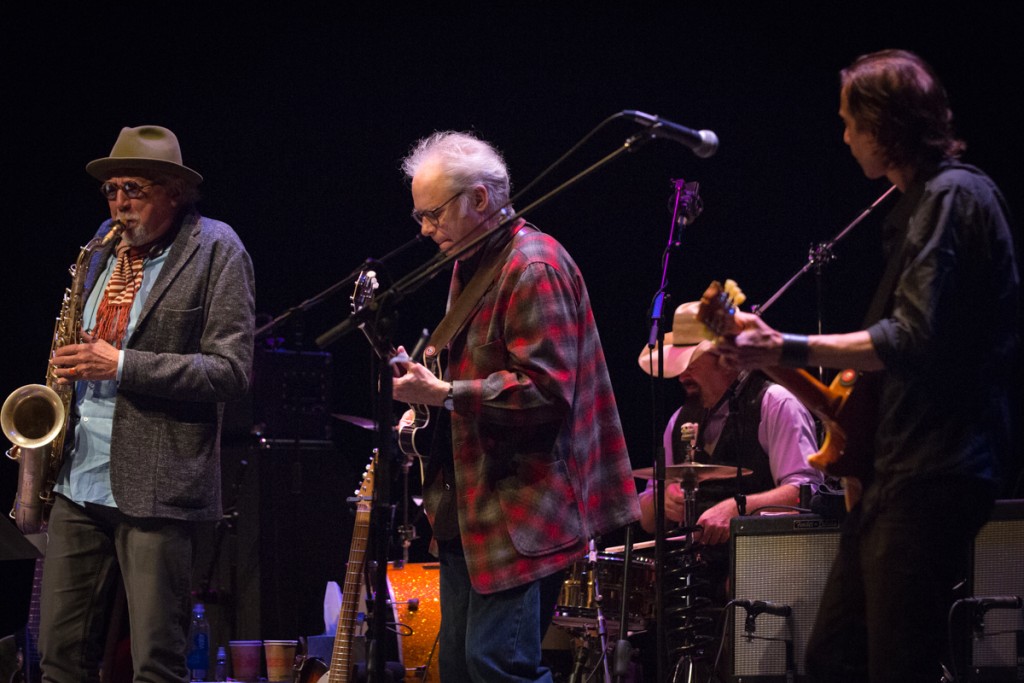 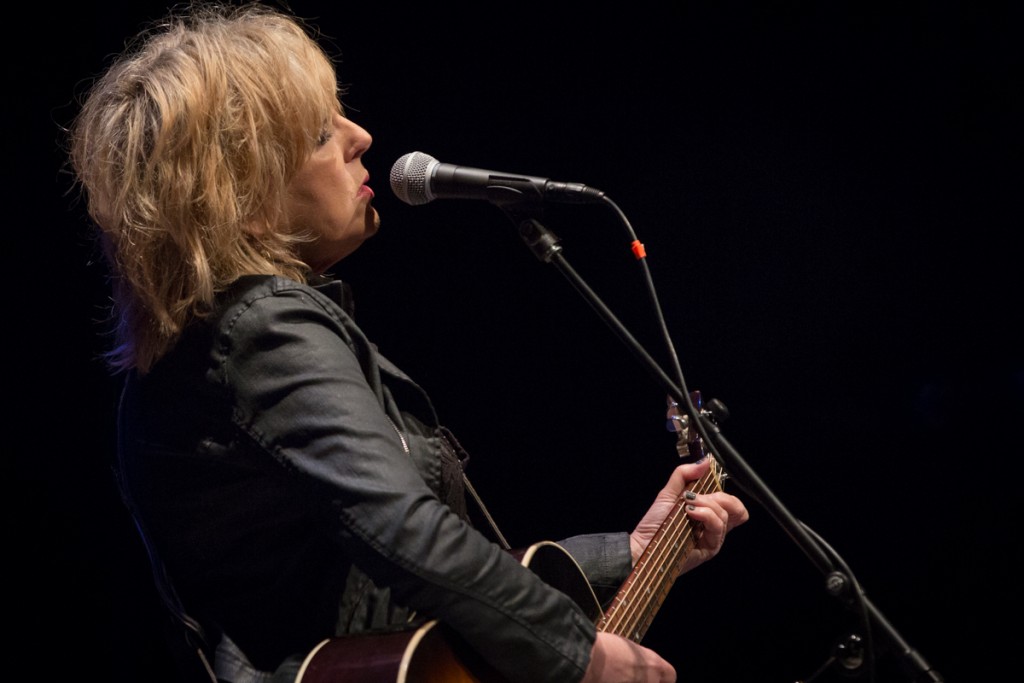 And then… the band, Lloyd and Williams took on “Masters of War” for an encore and didn’t stop there. Following with “Faith and Grace”, to which Williams spoke to the sold out audience that “this is my religion, right here”, she drove the point home with a roof lifting “Get Right With God”, complete with a double time revival finish, Lloyd right on top of all that hell raising. But, Lu and the band couldn’t hold back, and blessed the room with Sam Cooke’s “A Change is Gonna Come” to close a very special onetime performance on a note of true grace and beauty. 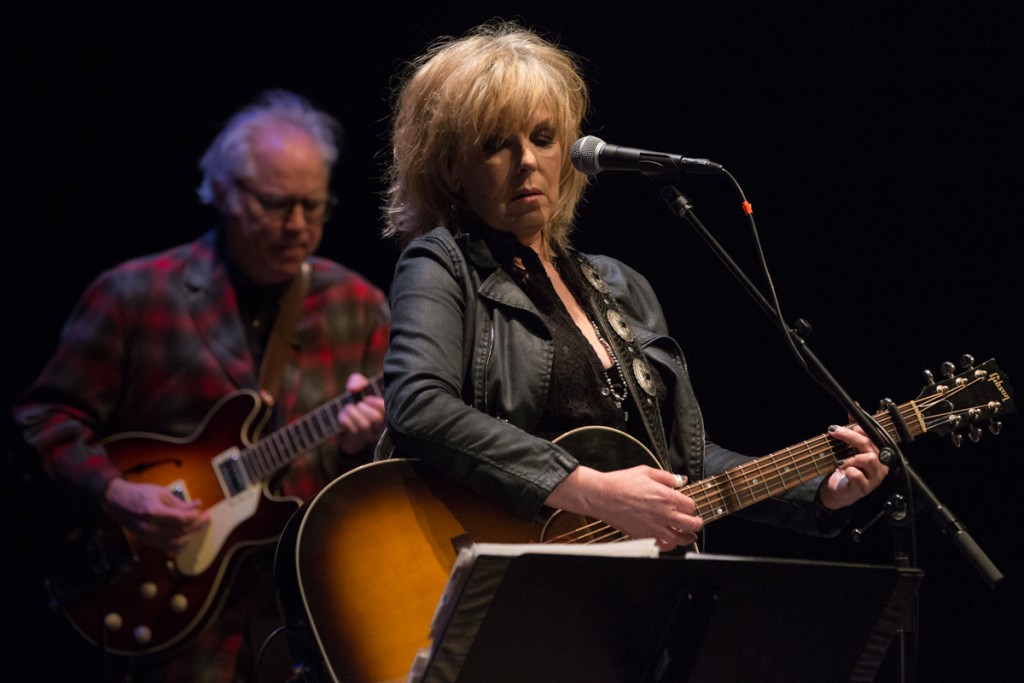 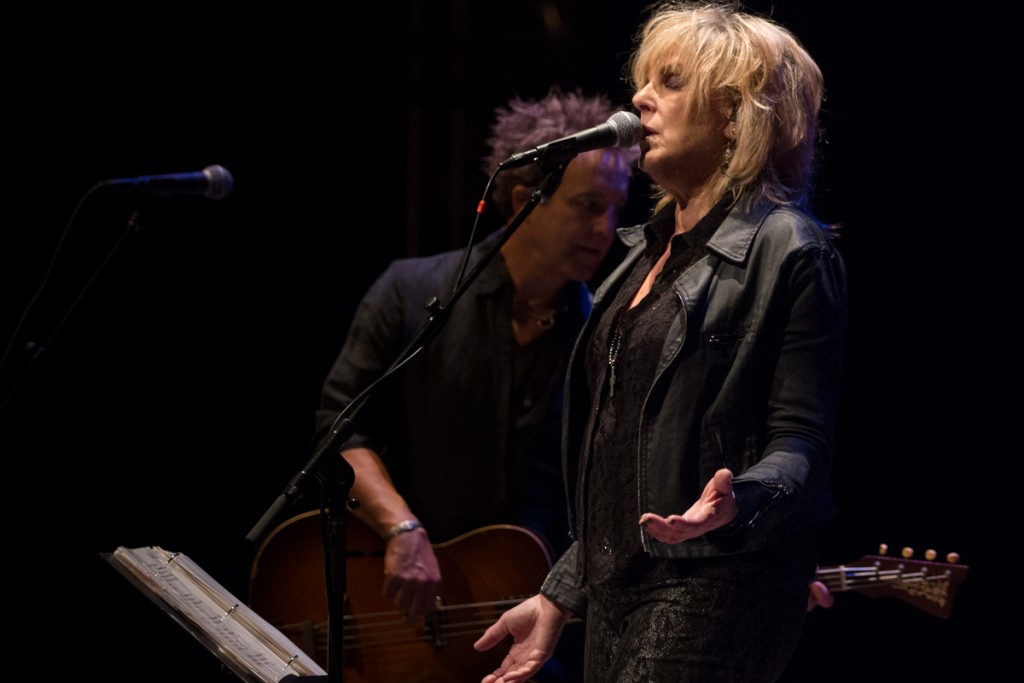 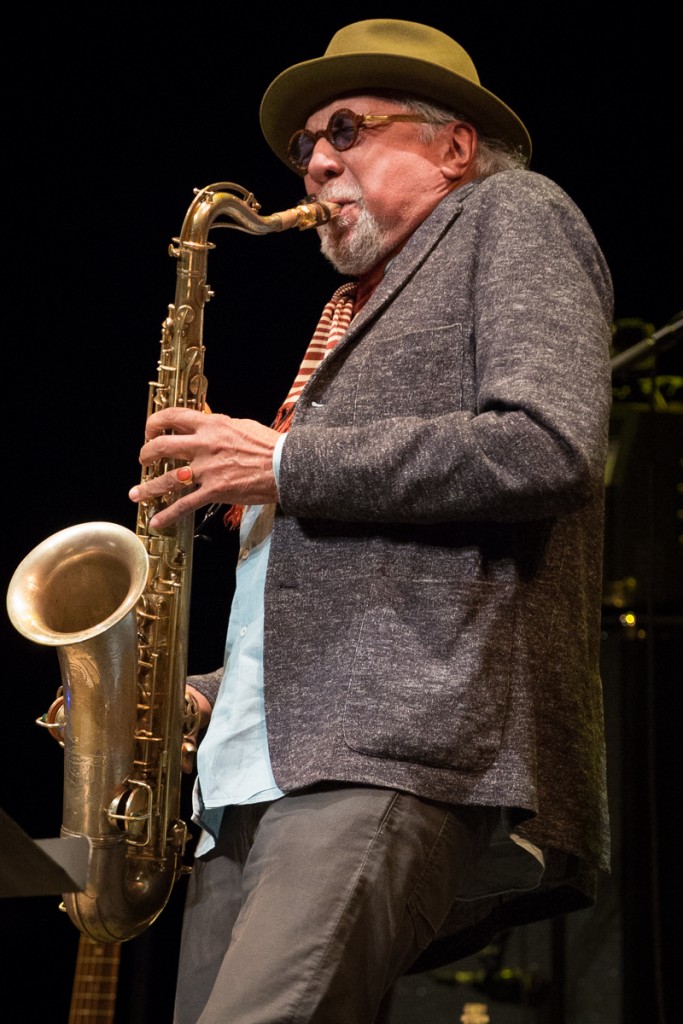 Songwriter Sean Rowe impressed in his opening solo set, perhaps no more so than taking on Richard Thompson’s “1952 Vincent Black Lightning” from the top fret down and back again. A pretty masterful go at a pretty masterful tune. 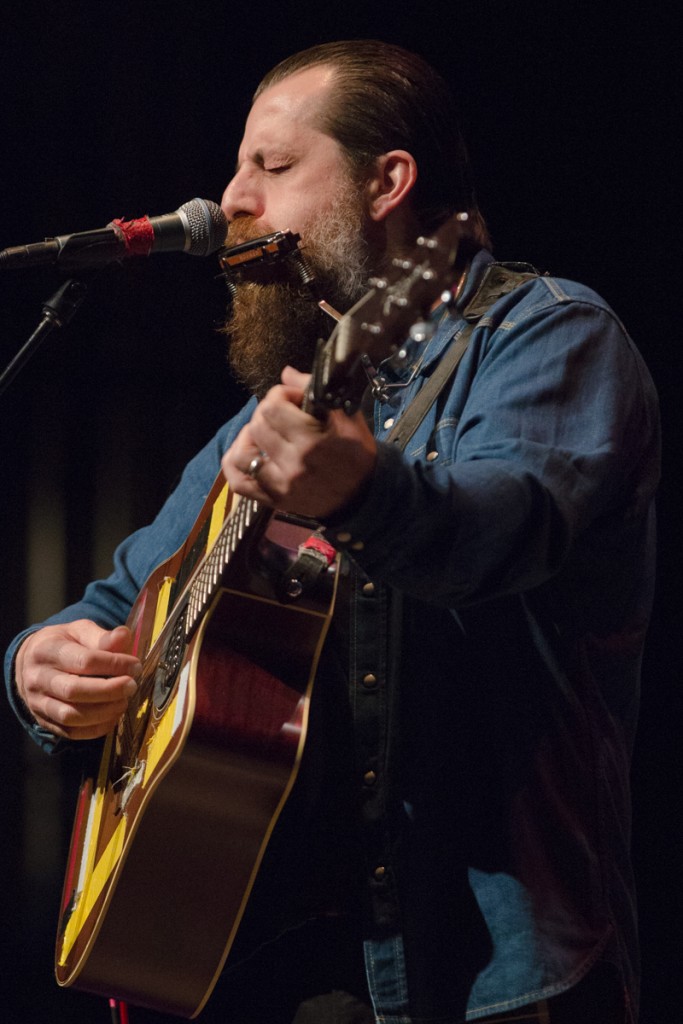 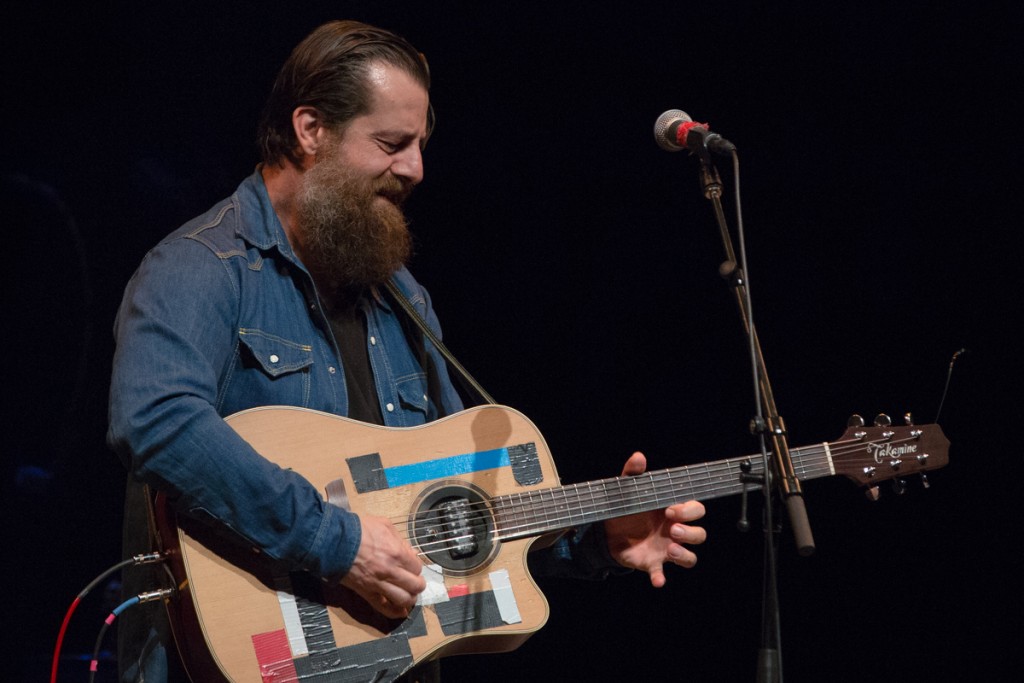 And some guitar wizardry

Roots songwriting meets jazz pedigree and 8, 9, 10 minute cuts. This really is a time of stretching and blending. Boxes outside or in, don’t conveniently fit. Just the kind of programming in the sweet spot of the Center for the Art of Performance at UCLA, and truly a VSOP.