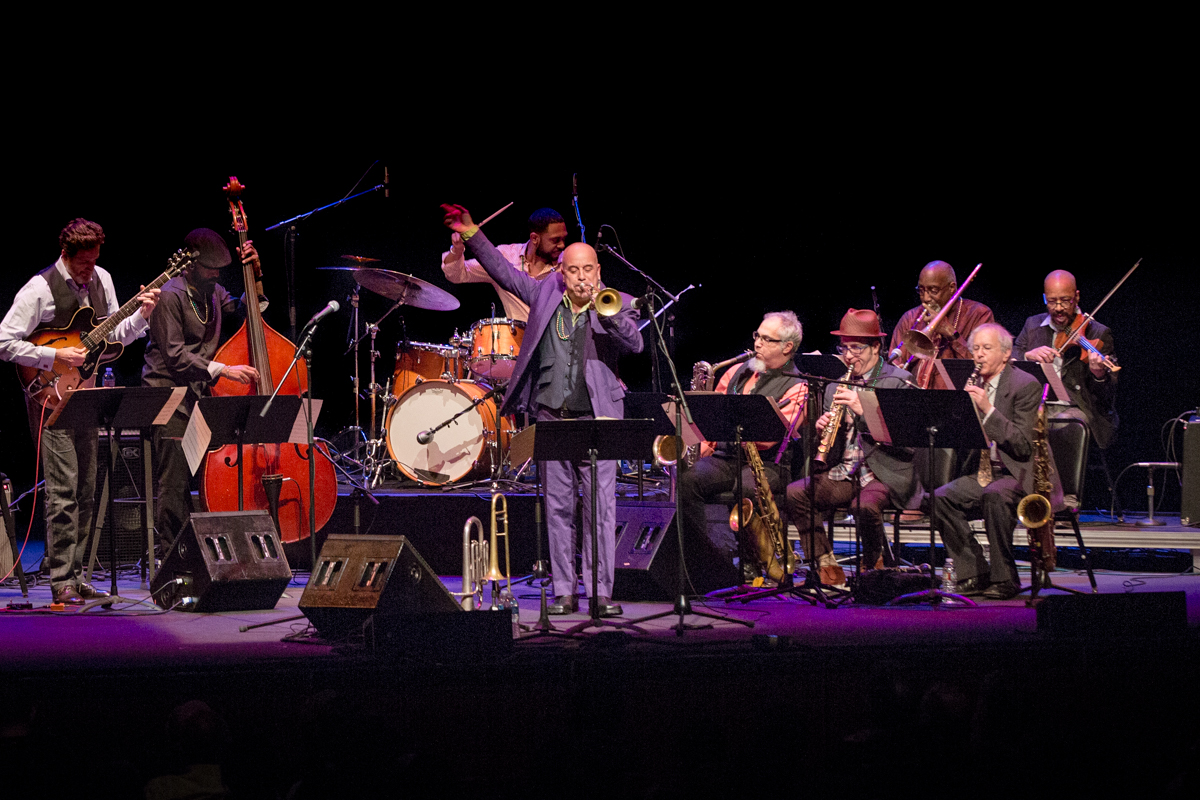 Fat Tuesday in Los Angeles is hard to discern from any other day of the year in this sun spoilt metropolis. Once you get past the pre-packaged king cakes in Whole Foods, there are limited options to channel any decent Mardi Gras energy. Fortunately, the Center for the Art of Performance (CAP) at UCLA, who never fail to pull a season together of the worldly and eclectic, really hit on something when renowned New Orleans pianist, Henry Butler (with Butler, Bernstein & the Hot 9) travelled west at the same time Brooklyn dhol’n’brassers Red Baraat kicked off a coast-to-coast tour. This Mardi Gras Bhangra bill was as close to real deal as we’ll get in this town, and a convergence of river deltas like no other.

Words tend to fall short when describing Red Baraat. This speaks less about my limited vocabulary and more about music that bends and infuses the seemingly disparate global elements of wedding music from Northern India (“baraat” is Hindi for a groom’s wedding procession) and the fat horns and funk of New Orleans, and then makes such utterly perfect sense when you experience it. Suffice to say it is a mashup of East meets West where the Ganges and the Mississippi come together, where the sweat is thick and the temptation strong. There is a different kind of drum line feel to the dhol driven sound led by front man Sunny Jain, draped with a trap kit, all that brass, and now, a guitar. A couple of years back, Sunny explained to me that the Indian brass tradition that came with British colonialism, and the common ground with NOLA horns, is not as far fetched as it sounds. In fact, he likened it to “cousin brothers”. I got it, and it’s hard to miss now. Ask, NPR’s Bob Boilen who described Red Baraat “as the best party band I’ve heard in years”.

With a few more albums under their belt since I last caught up with the band in 2012 (“Big Talk” and Gaadi of Truth”) I was also curious how the addition of guitarist Jonathan Goldberger would mesh with their sound (it does). And while Royce Hall is a beautiful venue, it is a bit more restrained for what is usually a start to finish dance party, but it didn’t take long for the audience to figure that out and get their asses out of their seats. Multilingual chants and choruses are a staple for these guys, and while there are discernable breaks between tunes, the effect is more of the whole. Sunny Jain led the charge for “horns please”, stomping through “Gaadi of Truth”, with rapfused verses and big ‘bone from Ernest Stuart. Trumpeter Sonny Singh hit a Bollywood high with “Mast Kalandar” and some especially sharp playing from all the horns. Guitarist Goldberger, who has done his share of film music, began another tune with deep bowing of his Fender Jazzmaster, horns swirling above only for the rhythm to drop a Zep like swagger into the stew, with some exceptional soprano flights by Jonathon Haffner. Yeah, try and put that in a box. Closer “ShruggJy Ji” turned into a Mardi Gras dance-off on stage. John Altieri’s sousaphone brought gravity and nimbleness to all the tunes, not an easy job description by any stretch. And the mix of Chris Eddleton behind the kit with Sunny Jain’s dhol is at the essence of the Red Baraat beat. There is a good reason the band’s logo features a dhol with wings. While Deadheads have said “it’s not that they’re the best at what they do, they’re the only ones that do what they do”. Ain’t no one else doing it like Red Baaraat, that’s for sure. 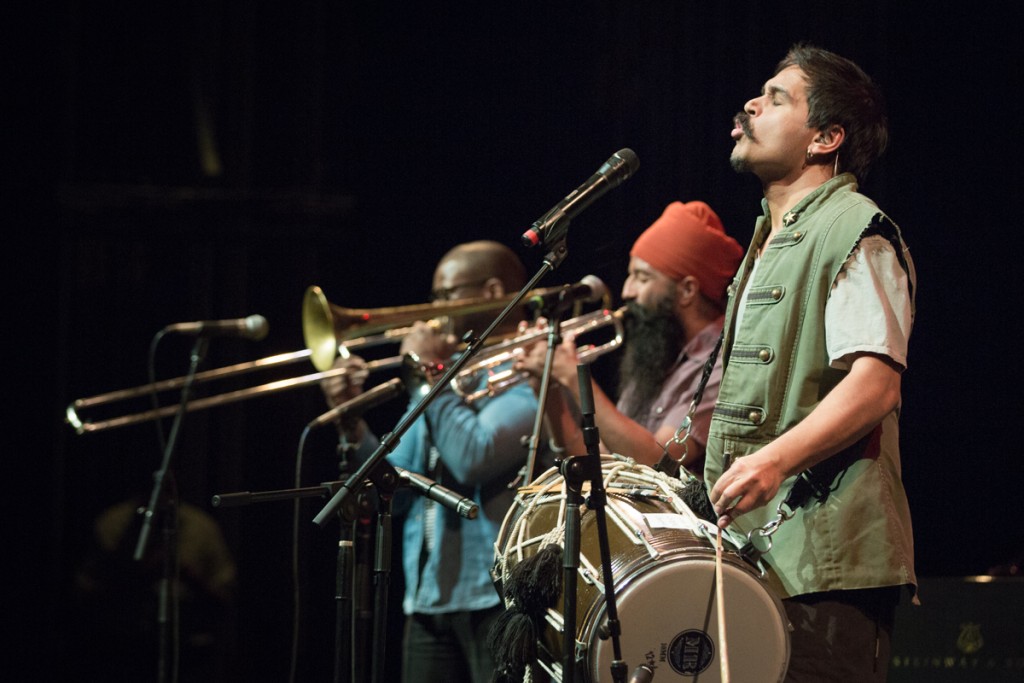 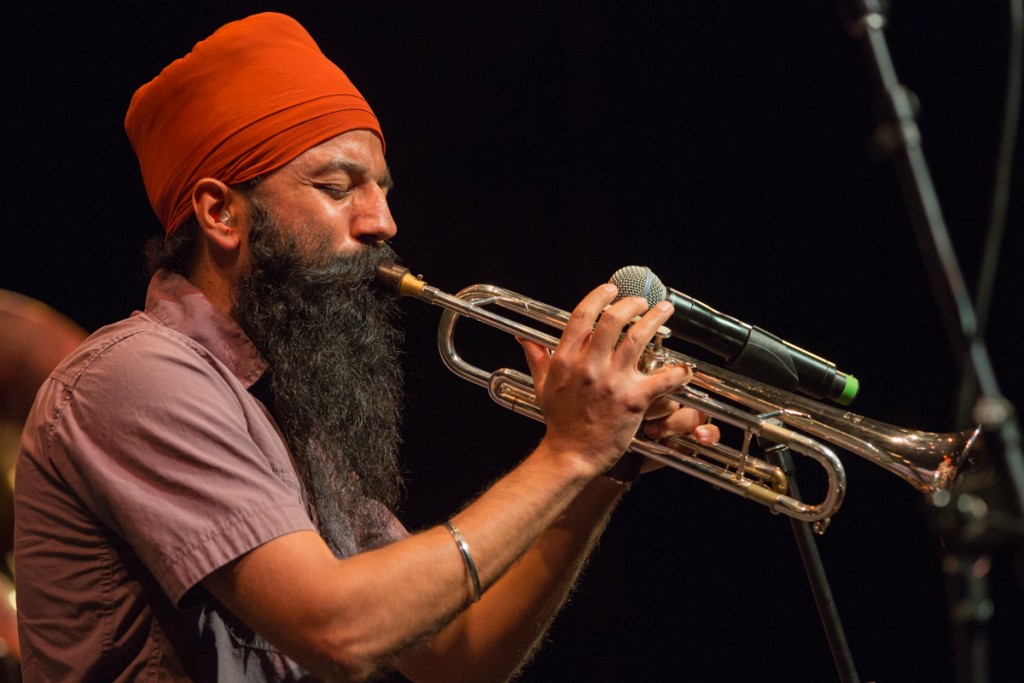 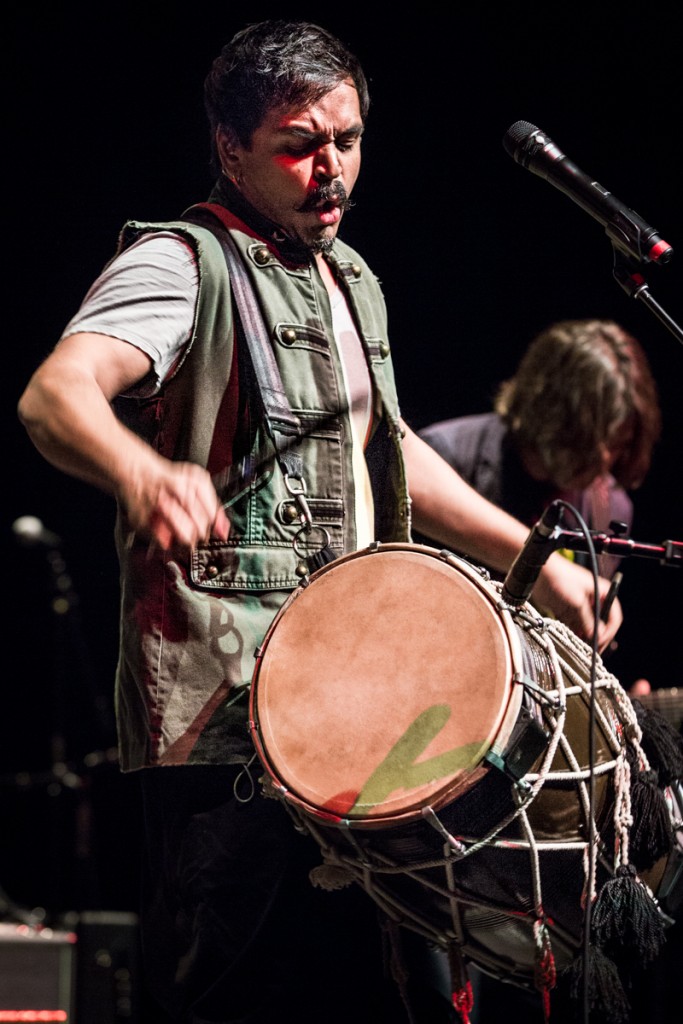 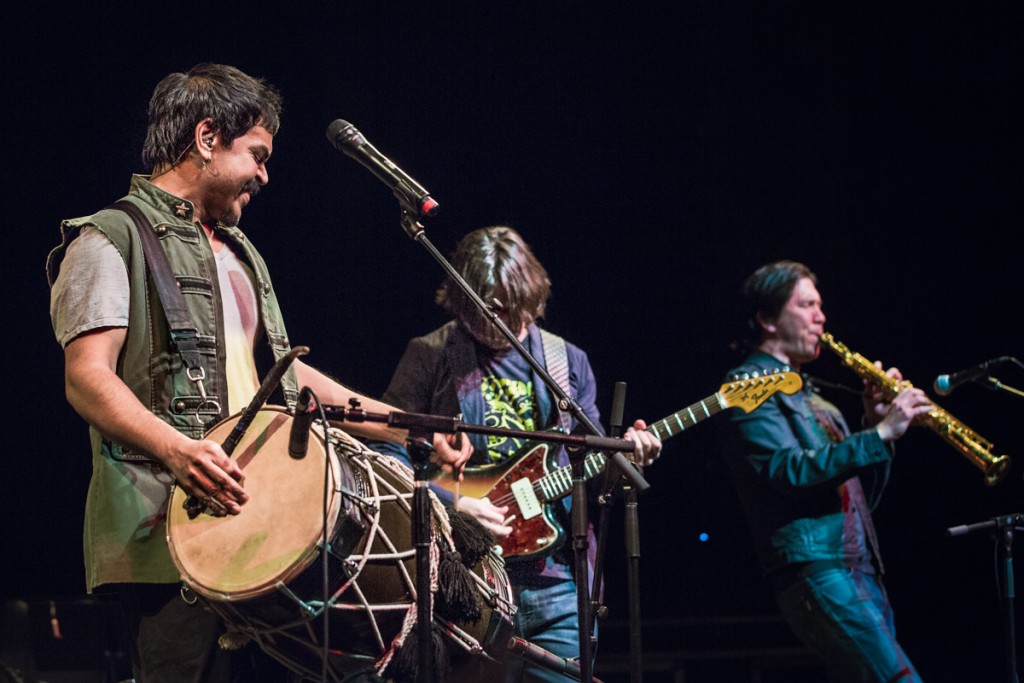 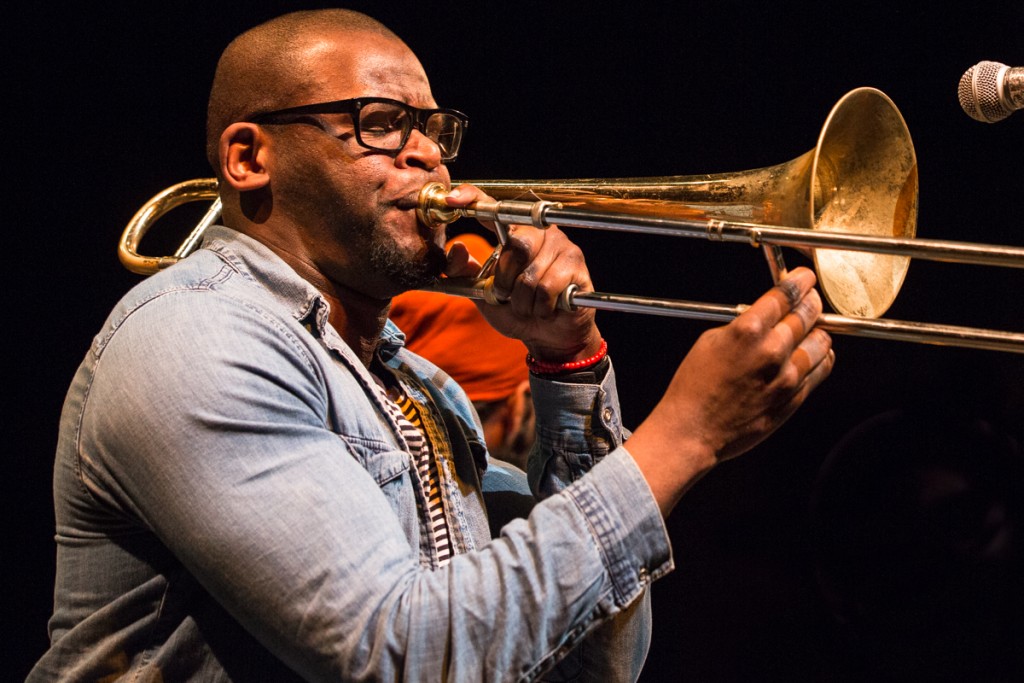 So, back more than a few years when I didn’t know my Professor Longhair from my James Booker, I always felt the tug of the great piano sounds of New Orleans (albeit, initially strained through bands such as Little Feat). Flash forward to oh so many Jazz Fests ago and the one name I kept hearing over and over again was Henry Butler. Well, when I finally heard Butler at the Fest I, was pretty astounded by his playing, which just boogied and rolled furiously. I swear, he has a brain in each of those key striking digits. For those not familiar, Butler was born blind and has been performing since he was 12. His early efforts were jazz driven, working with giants like Cannonball Adderley, Freddie Hubbard and Ron Carter, to name a few, before he shifted towards New Orleans music and blues with a vengeance. Whether playing stripped down or solo, or with a larger ensemble, it is something special to hear Henry Butler perform.

Butler, Bernstein & the Hot 9 are described in their own words (or at least on their Facebook page and web site) as a “happy collision of two perfectly matched musical sensibilities”, pairing Butler with “retro-futurist trumpeter and bandleader Steven Bernstein” in a band that uses “a traditional New Orleans palate as their launching point”. Apparently, this is very much a Brooklyn tale, where both Bernstein and Butler currently live (and no coincidence, Red Baraat also has roots). Their latest release, “Viper’s Drag”, also reactivates the Impulse! jazz label by Universal Music Group, a label synonymous with so many landmark releases of the 60s.

When BBH9 hit, it sounded way bigger than the 10 pieces on stage. The five horns, guitar, bass, drums and fiddle(!), plus Henry Butler, potently filled the stately confines of Royce. Seated behind a Steinway grand to start (but with a Roland to his right), Butler really flew with his “Dixie Walker” from the new release, then covered Fats Domino’s “Hello Josephine”, his first vocal take. “Working in a Coal Mine” was dedicated to Allen Toussaint and Butler not only brought some of Toussaint’s velvet to the vocals, he did the same for some extended keyboard runs that pretty much schooled any piano players in the 310 (and then some). Fess’ “Going to the Mardi Gras” went from plucky to full on barrelhouse spiked with some island flavors that was Butler at his best. Back to the Steinway, Butler took an extended intro that went from swamp quiet to storm fury, with a churning left hand and leap frogging bass lines that pushed all 10 pieces forward. The Hot 9 horns piggybacked to a buildup that landed on Billy Preston’s “Will It Go Round in Circles”, then dialed it down to just Butler and the grand, channeling jazz, stride, New Orleans R&B and I’m sure many references way over my head. The man can play just about anything, as best I can tell. Near the end of the set, Butler asked if “y’all heard of the Big Chief, makes all the big decisions, like when we smoke the next joint, have the next drink”, before closing with Earl King’s “Big Chief”. Throughout the set, Bernstein and the Hot 9 lived up to their name, especially Bernstein’s playing and arrangements, with a special shout out to Peter Apfelbaum and Erik Lawrence who really brought their A game to a number of crowd rousing solos throughout the set. 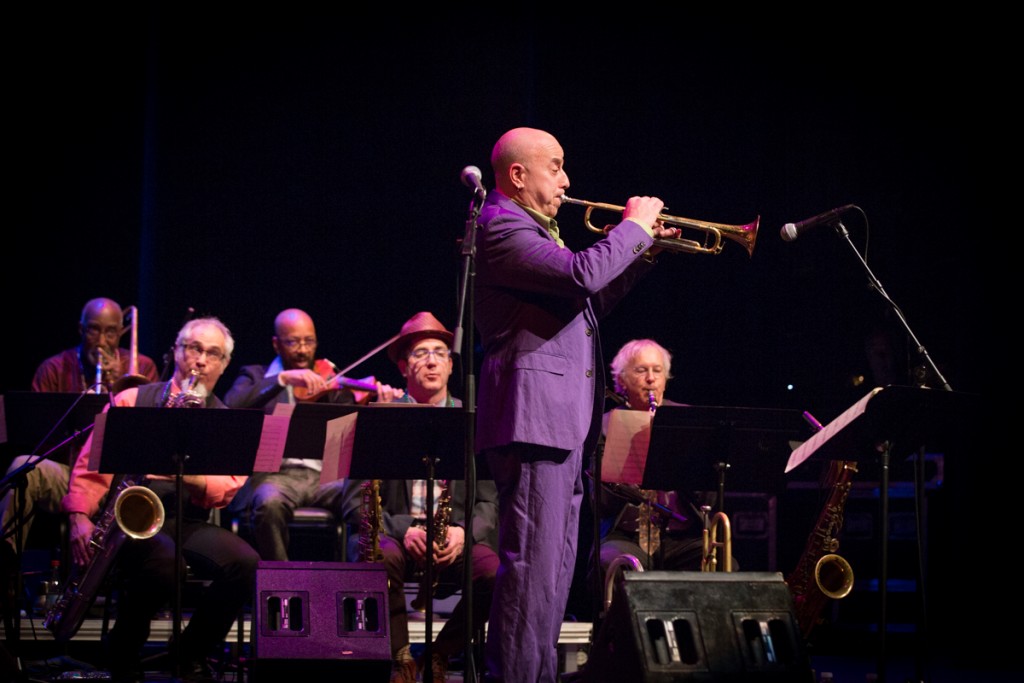 6 of the Hot 9, including bandleader Steven Bernstein 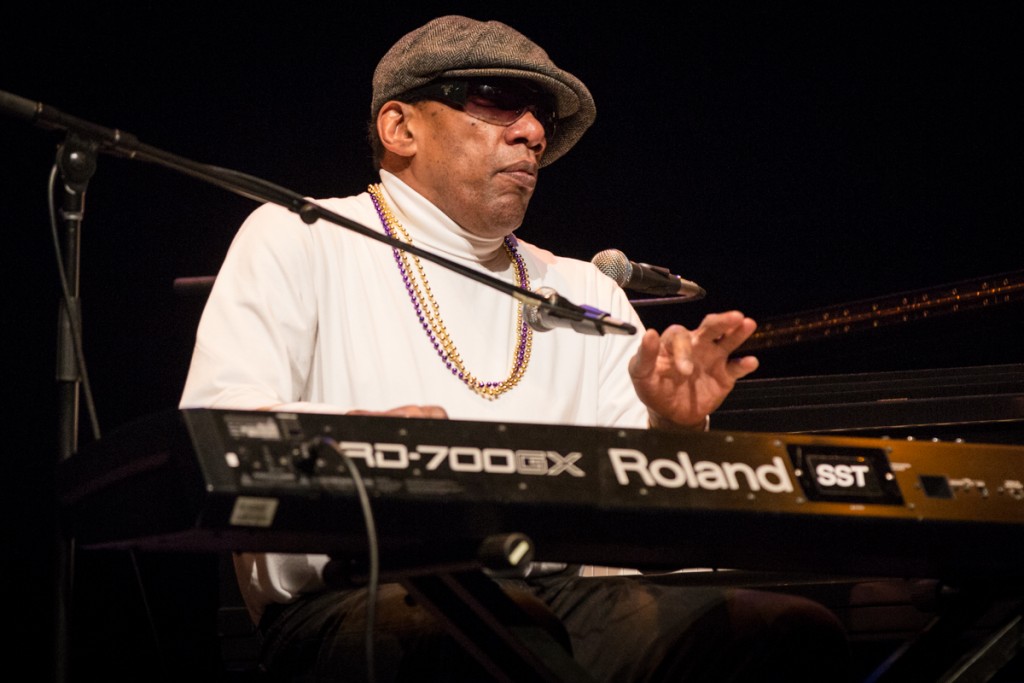 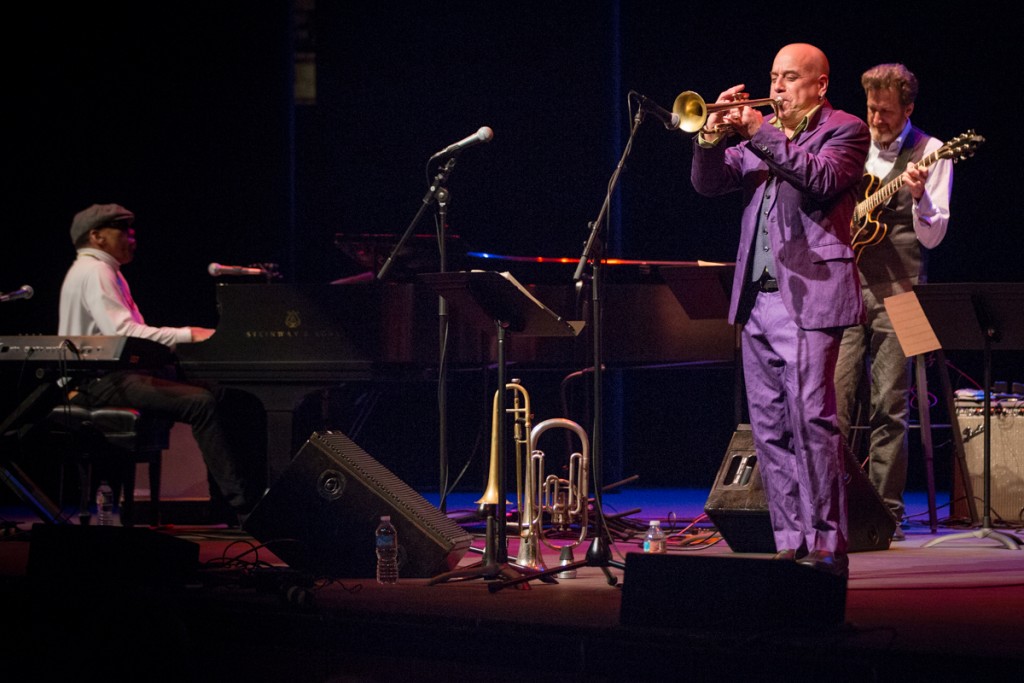 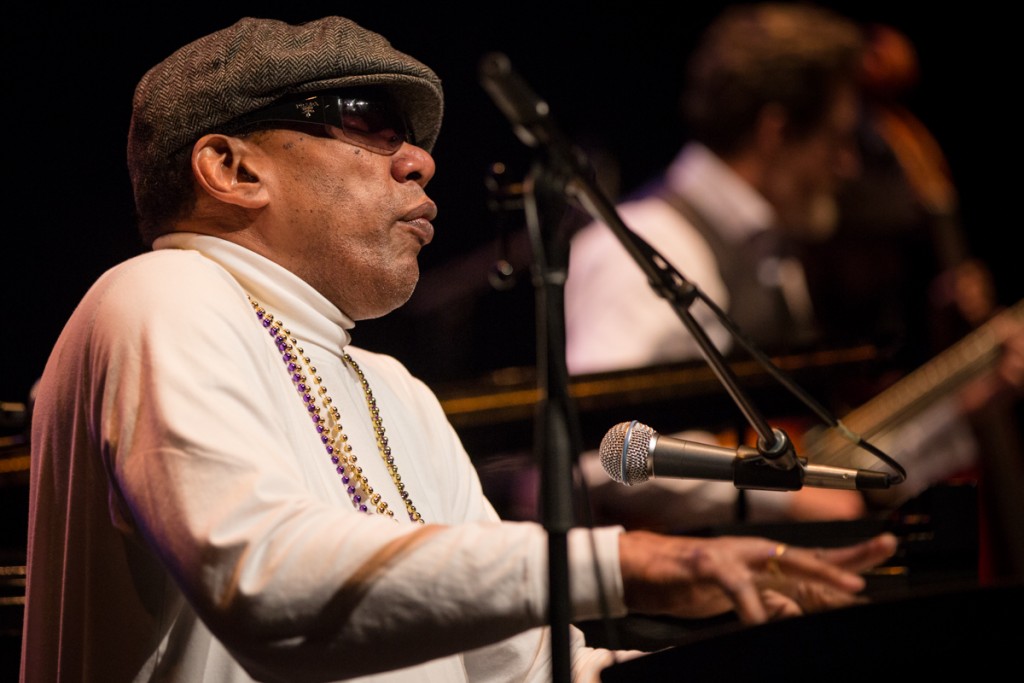 Alas, Mardi Gras and Fat Tuesday must give way to Lent and restraint (if that’s your orientation). This being Los Angeles, I don’t expect much to change around here. But for a night, we gathered to revel in the sounds and influences of Mardi Gras far and wide. And a Mardi Gras Bhangra it was. 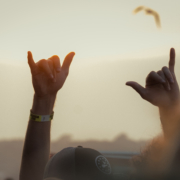 The Infamous Stringdusters and Della Mae, The Troubadour
Scroll to top