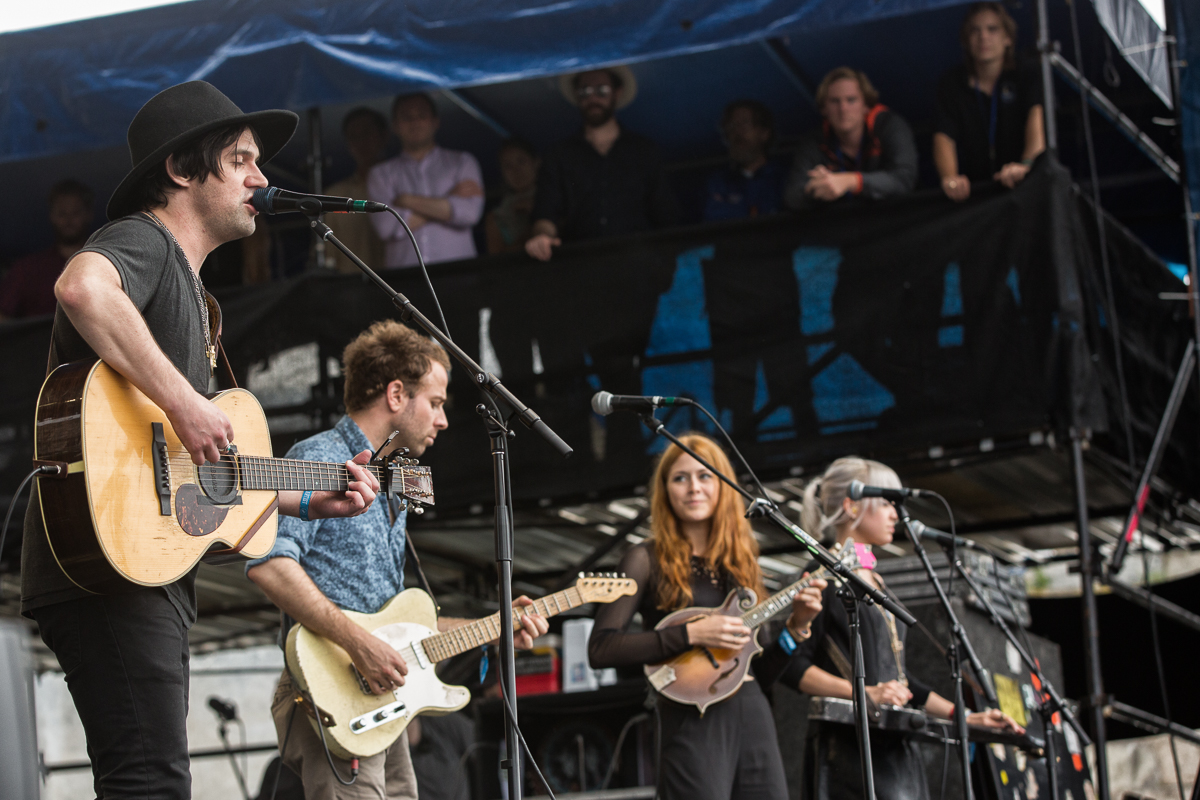 Few festivals conjure up historic page turners like Newport Folk. Dylan’s 1965 plugged in performance is the stuff of legend that only happens to be true. But by the time the 70’s rolled around, the event fell on harder times and went dark until resurrected in 1985. These days, there still is nothing like Newport. The picture perfect setting, Pete Seeger’s presence everywhere and attendance capped at 10K. This is a Fest just as independent as days of yore, whose acts are not about a paycheck and are on the bill regardless of sales. When asked his definition of “folk” recently, Fest producer Jay Sweet told JamBase that founder George Wein considered folk as “anything that wasn’t jazz”. This Fest has held true to that renegade spirit. In that same interview, Sweet went on to say that acts are booked because “I want them to play…the audience demands that you play…and the artist wants to play”. As Rolling Stone noted recently, talent will often play for less, just to be a part of the Newport experience.

So, it was my good fortune that at the end of an East Coast vacation, I was able to wrap the trip around the last day of the Fest. Newport had been on the personal bucket list for some time, and while I missed the likes of Jack White, Ryan Adams, Nickel Creek, Jenny Lewis, Lake Street Dive and Milk Carton Kids among others, Sunday looked just as strong. Dawes, NOLA’s Hooray for the Riff Raff, Fest vets Trampled by Turtles, Conor Oberst, Jeff Tweedy flying solo, the perpetually awesome Rodrigo y Gabriela and closer Mavis Staples made for a pretty impressive schedule. But I also had my eye on the Deslondes, Caitlin Rose, Valerie June, Pegi Young & the Survivors and Ed Helms’ Bluegrass Situation (not to outdo John C. Reilly’s Saturday appearance).

Approaching Ft. Adams State Park by a water taxi (OK, a skiff with benches), the flag over the fort was noticeably at half staff. It wasn’t until later I learned it was in honor of Seeger, who appeared at every Folk Fest since 1959, and passed last year. Newport is a living testament to Seeger’s legacy. Surrounded by fort walls dating to the 18th century makes for intimate surroundings and with Narragansett Bay as a backdrop, a dramatic setting. The scale of the event is completely intimate and easy, if not a little quirky to navigate. The buzz on the first few days was high, especially Jack White’s Saturday closing set and “Goodnight, Irene” encore. The whole thing felt remarkably personal.

The forecast was dodgy, but other than a brief early-ish downpour, managed to go the right way. I headed to the Fort Stage for the Berklee Gospel Choir and found myself reduced to a puddle in pretty short order – totally unexpected and moving. My left coast disorientation led me to the Quad Stage, rather than the intended Harbor Stage for the Deslondes, only to be introduced to Lief Vollebekk, who among other tunes, affectionately sang “Photographer Friend” (about a music photographer friend, that’s a first in my book) before covering The Killers and Sigur Ros. A stage announcement called for possible severe thunderstorms and safety measures and right on cue, the skies briefly opened up, but the rumble stayed away. 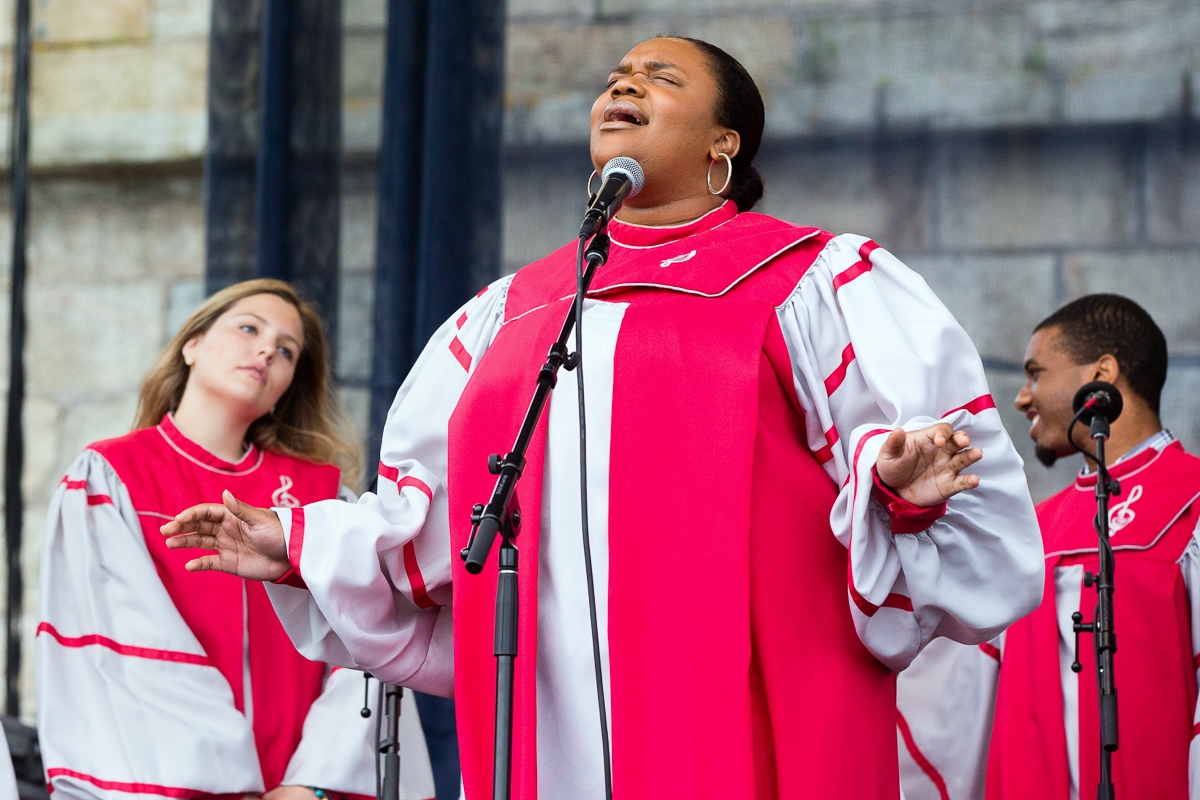 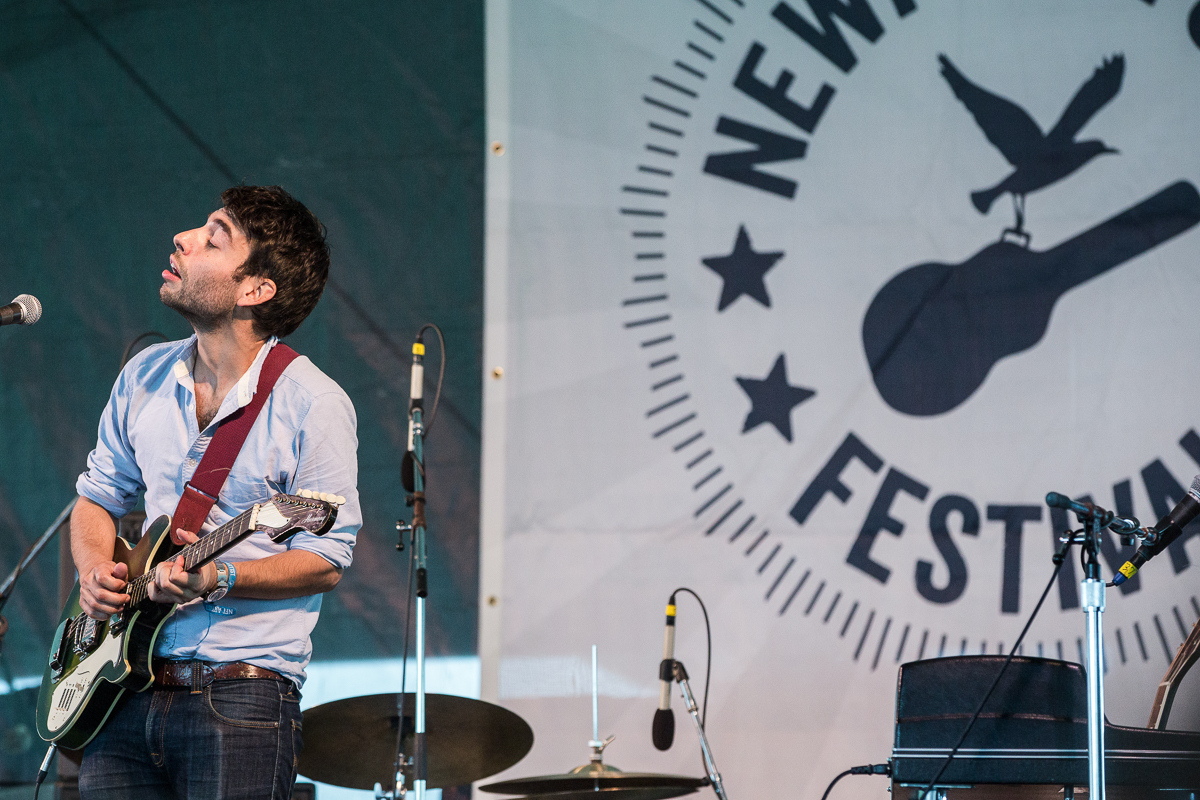 At the Harbor Stage, Caitlan Rose brought some Nashville spunk and sharp accompaniment that was totally winning. Long before there was the Hangover, there was Ed Helms and the Lonesome Trio, who have been at it for some 20 years (something about hacky-sack at Oberlin College may have started it all). “they play songs that they like and songs that get stuck in their heads”. Funny and authentic. Bouncing between the Harbor and Quad Stages had me back for Pegi Young & the Survivors, with guest Spooner Oldham on keys, who were very solid indeed. Gregory Alan Isakov had the Quad Stage audience at rapt attention and repeaters, Dawes, owned the Fort Stage (later backing Conor Oberst, as well). 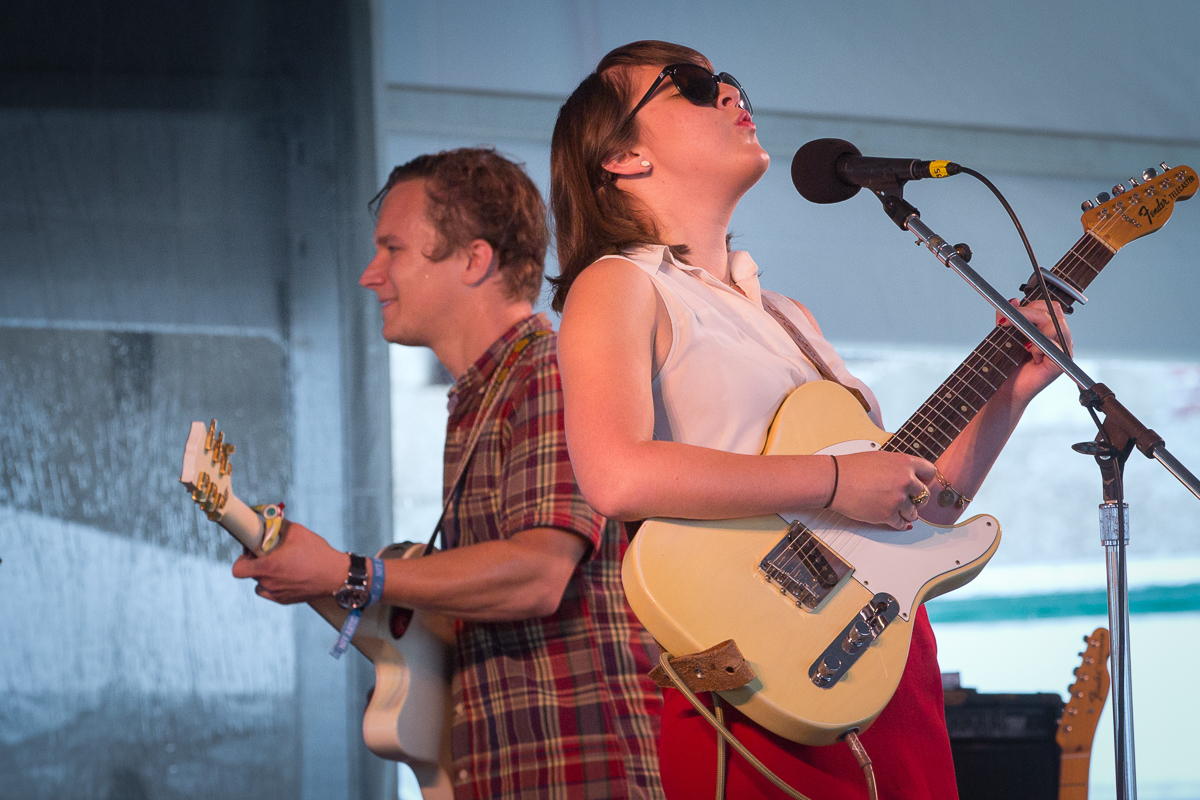 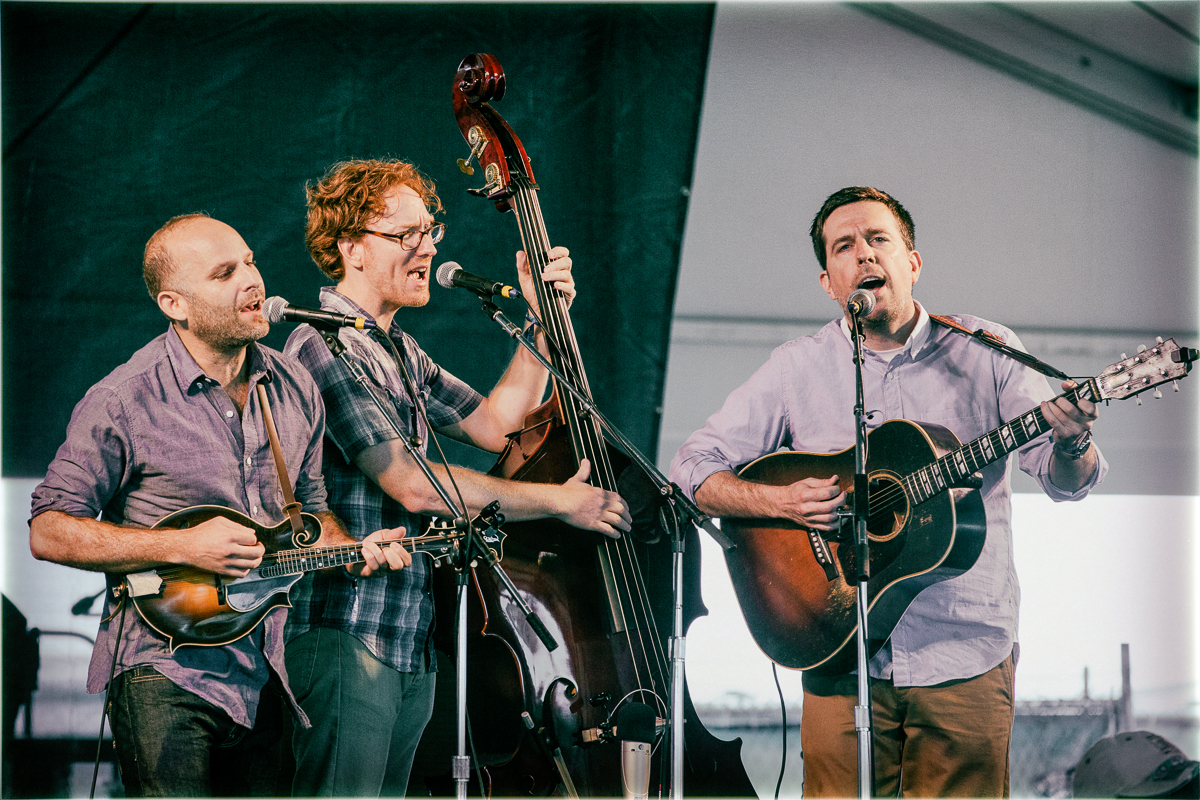 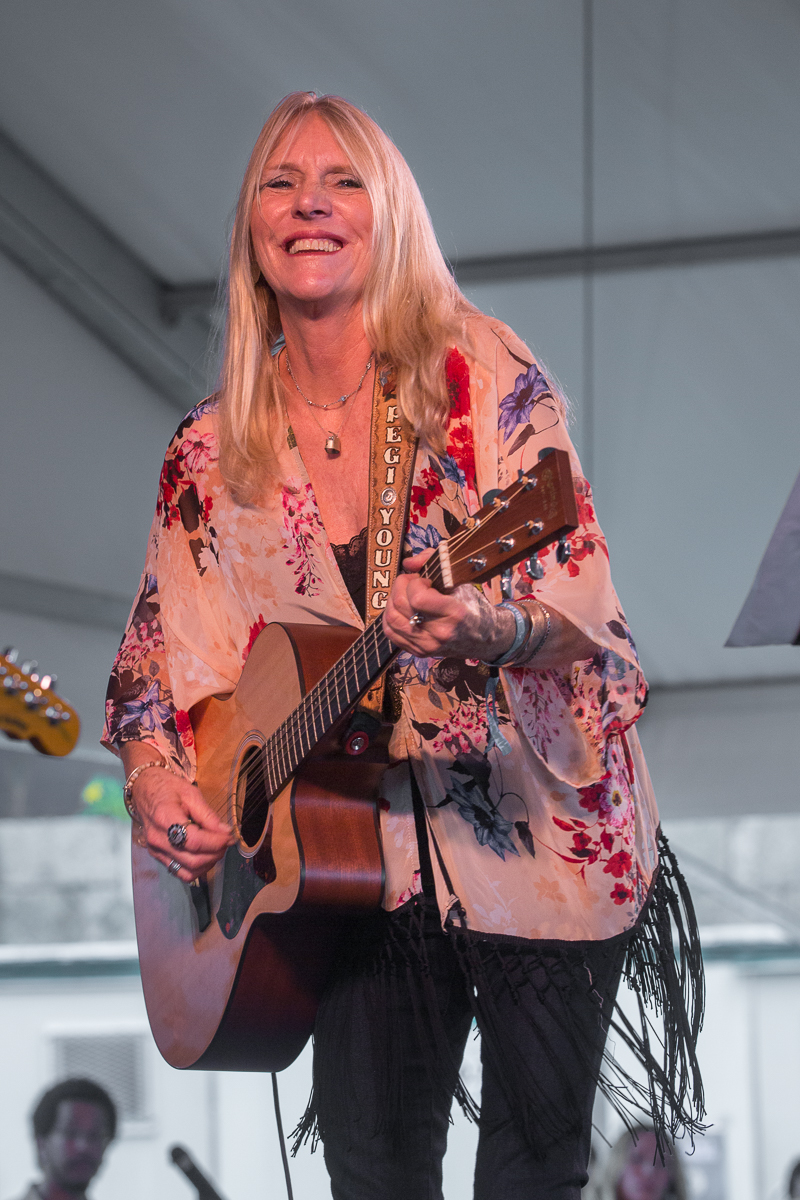 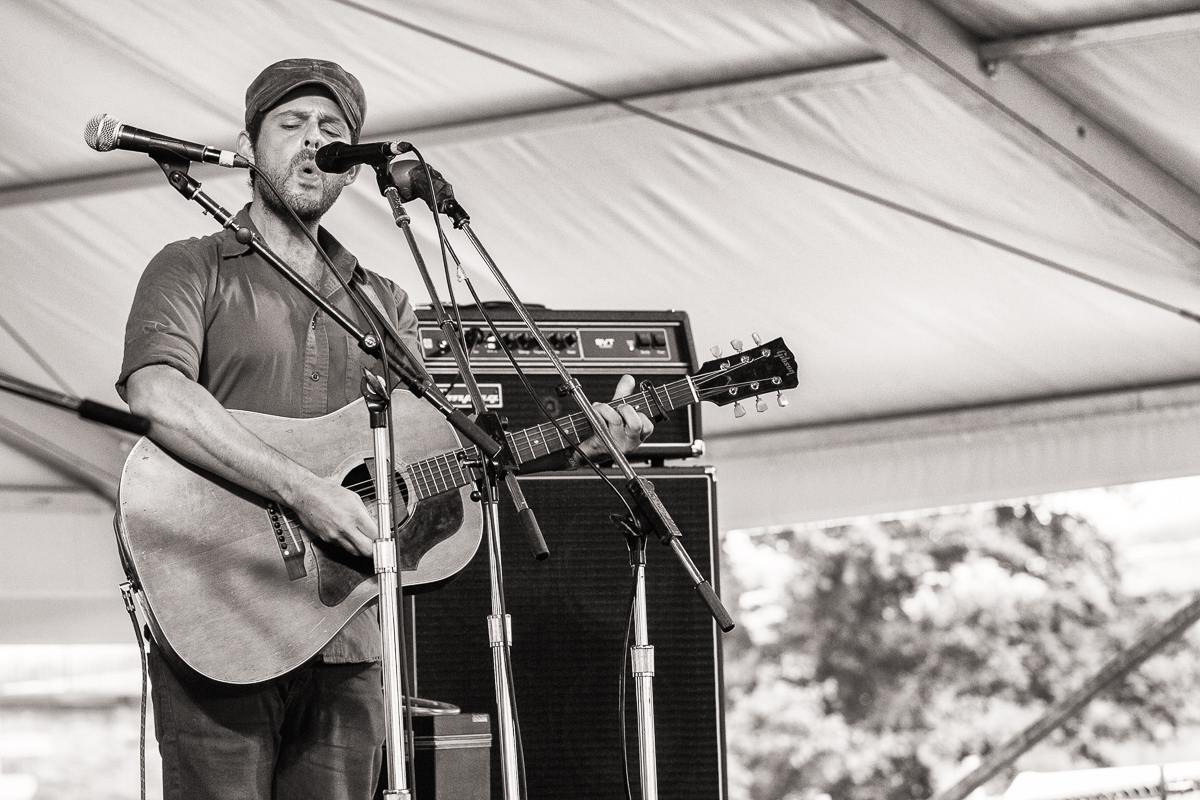 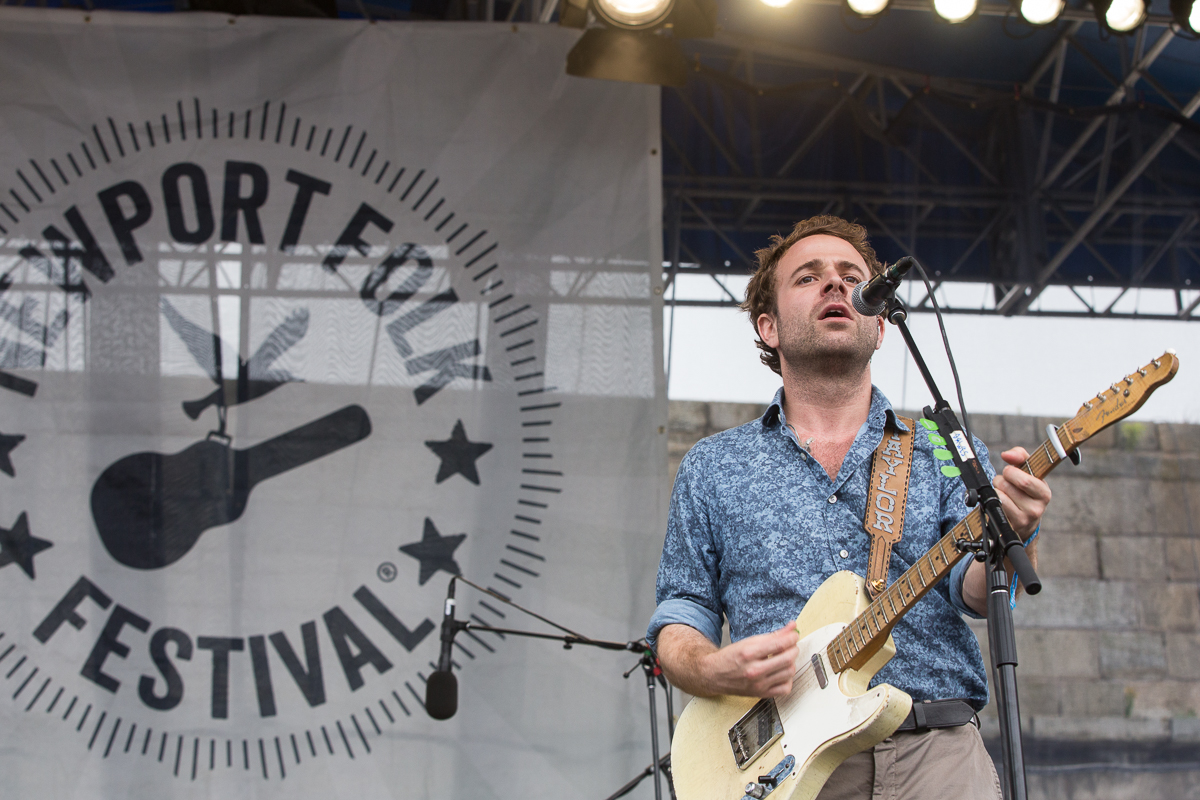 Hooray for the Riff Raff returned to Newport honoring Seeger with an “If I had a Hammer” sing along and Americana that draws inspiration from the dustbowl to Dylan to growing up digital. One of the day’s highlights, for sure. Couldn’t split myself for Valerie June and Trampled By Turtles. June’s set was a little delayed and overlapped with TBT, but a banjo accompanied “Rollin’ and Tumblin’” opener made it clear why her “organic moonshine roots music” is a unique voice that was totally appropriate for a Folk Fest debut. Trampled By Turtles had the Quad Stage crowd ecstatic, while Jeff Tweedy flying solo more than held down the Fort (I only caught the start of Tweedy’s set, which also featured appearances by Jess Wolfe and Holly Laessig of Lucius, as well as Mavis Staples).  The pin drop set of the day came from Irish singer-songwriter Hozier (Andrew Hozier-Byrne) at the Harbor Stage, which I wasn’t able to get to, but had people talking. 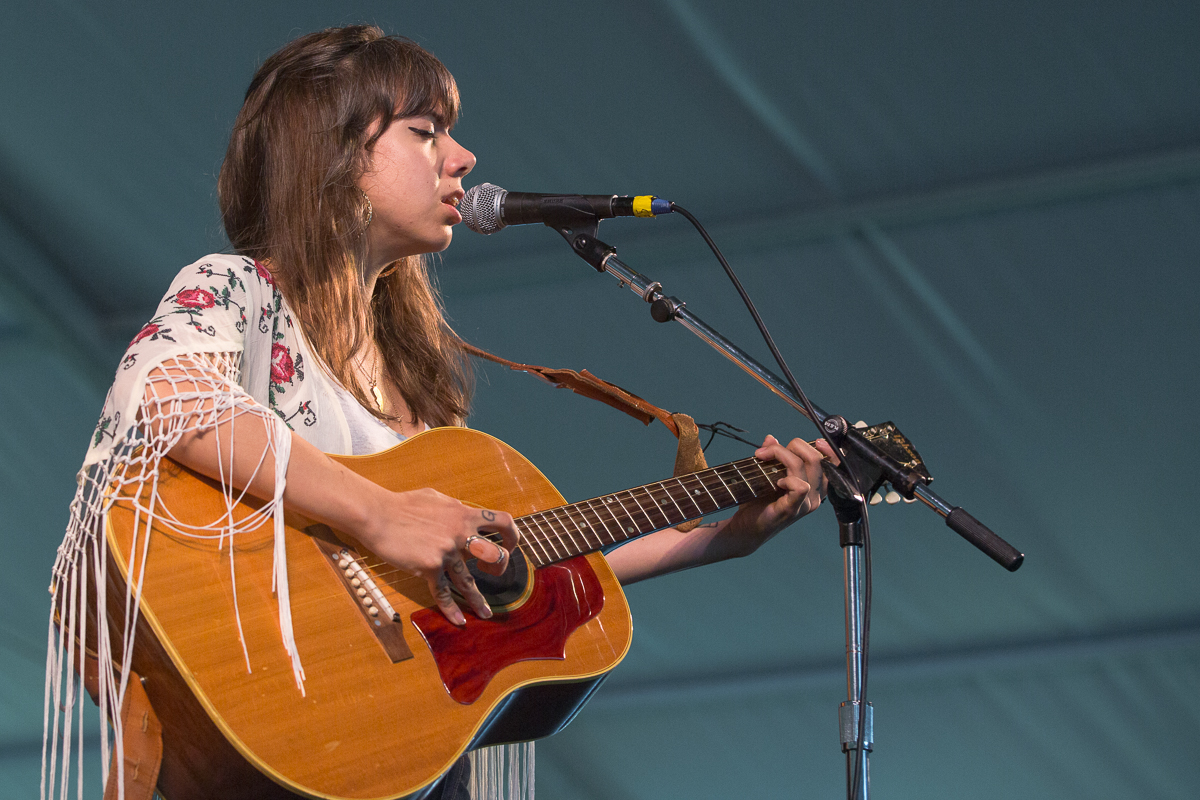 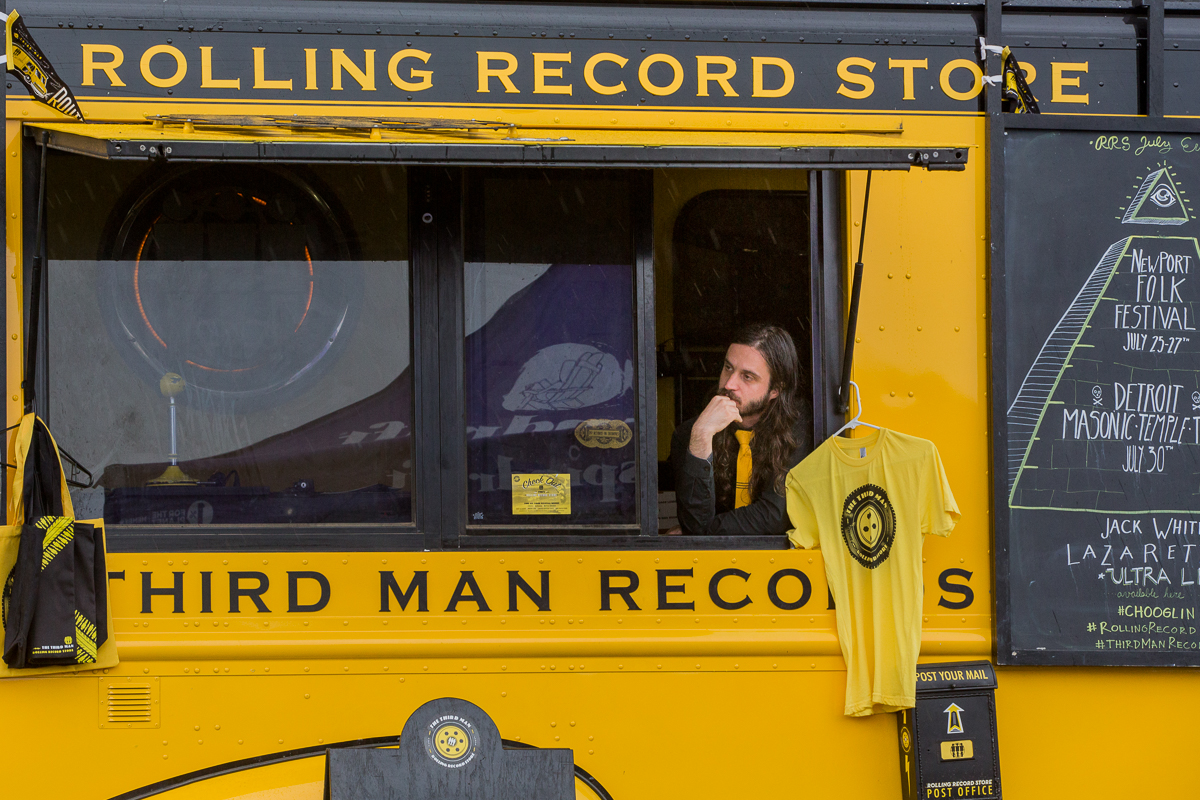 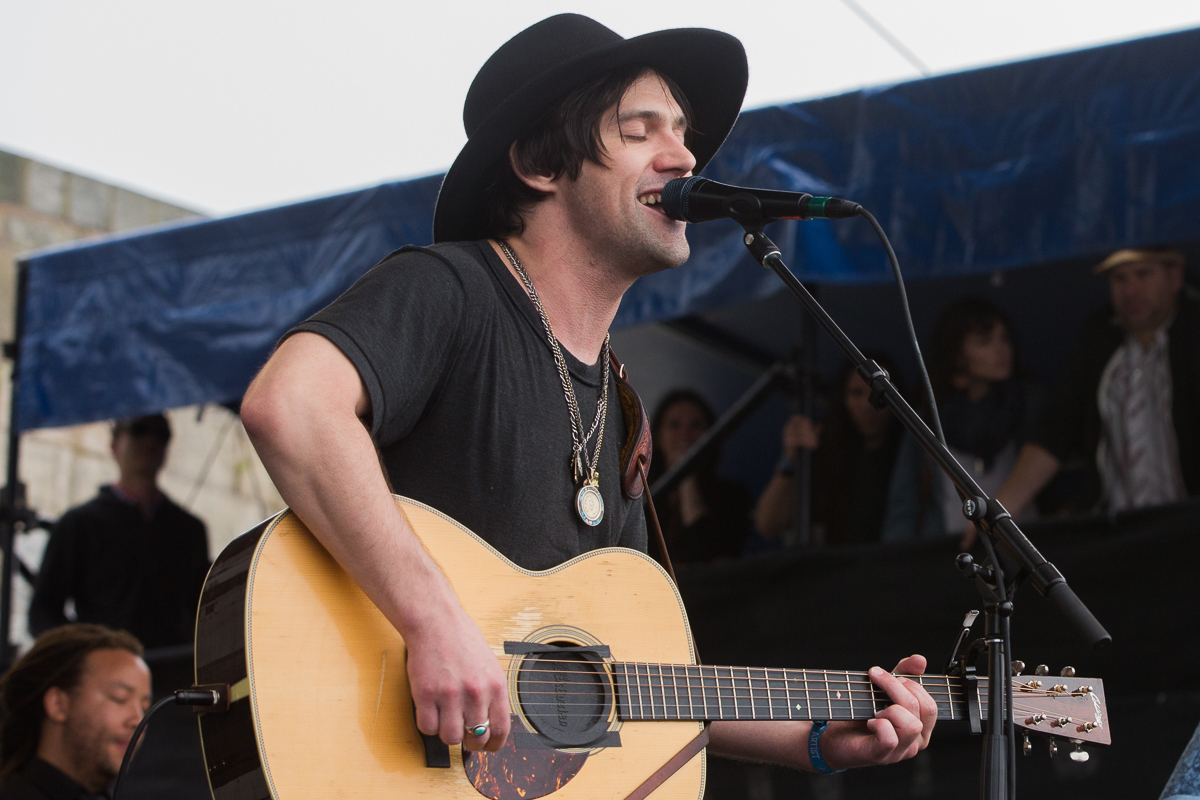 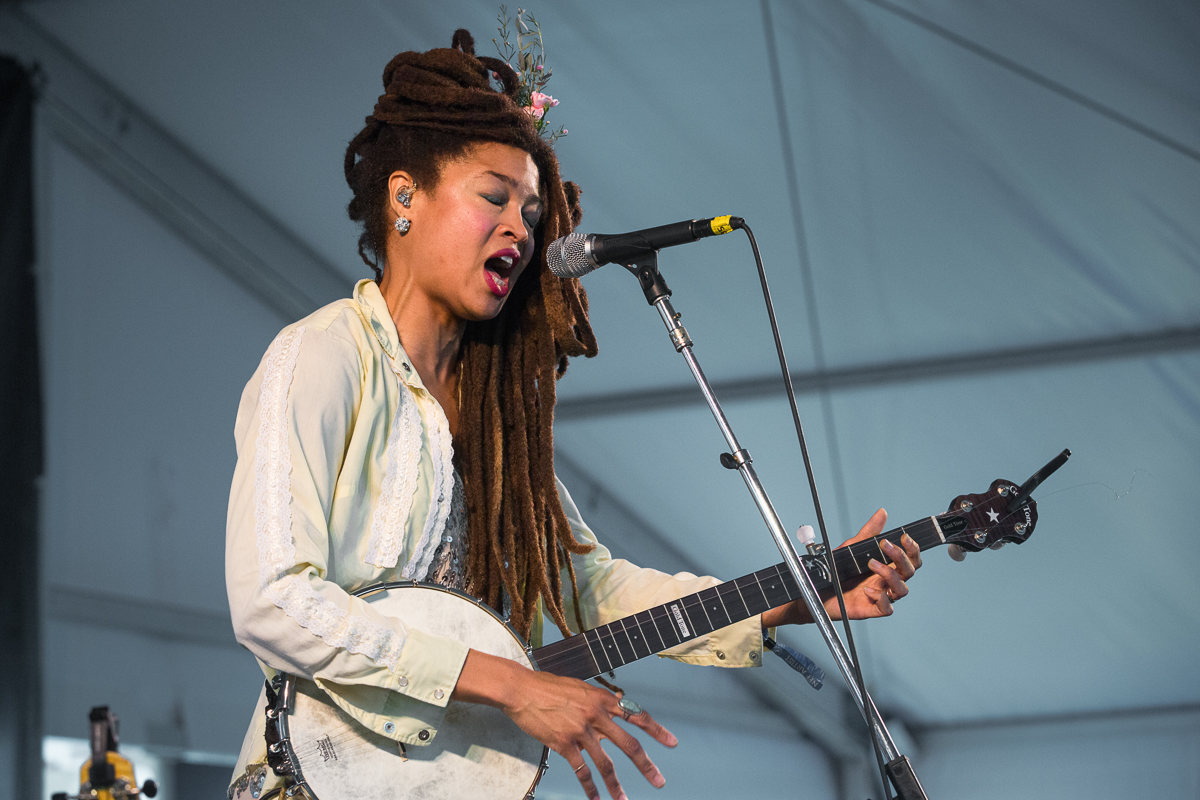 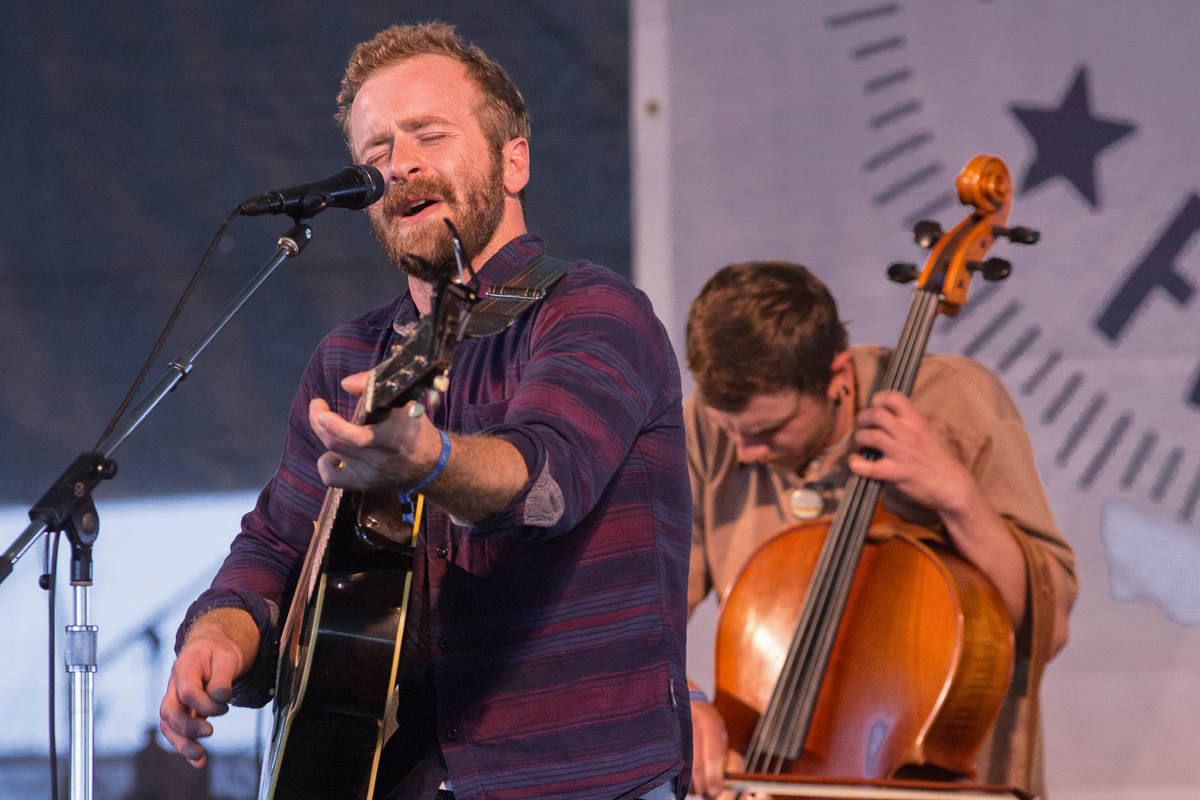 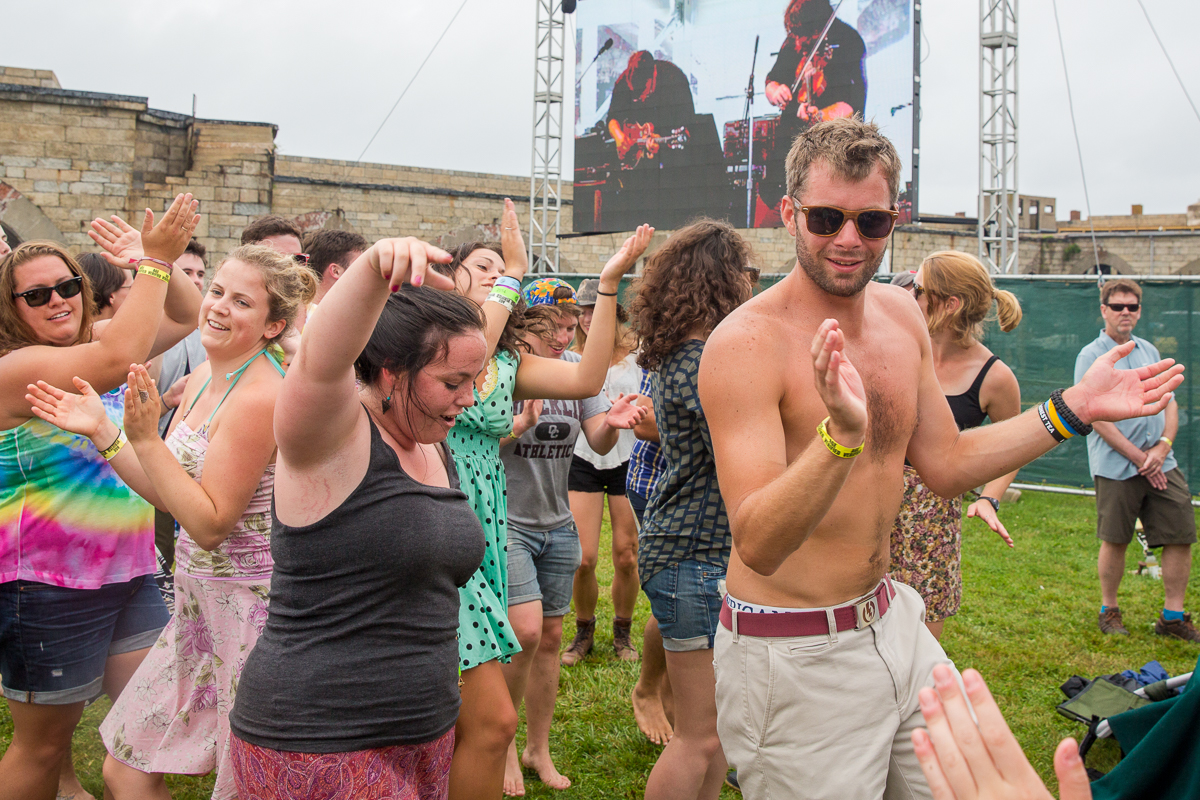 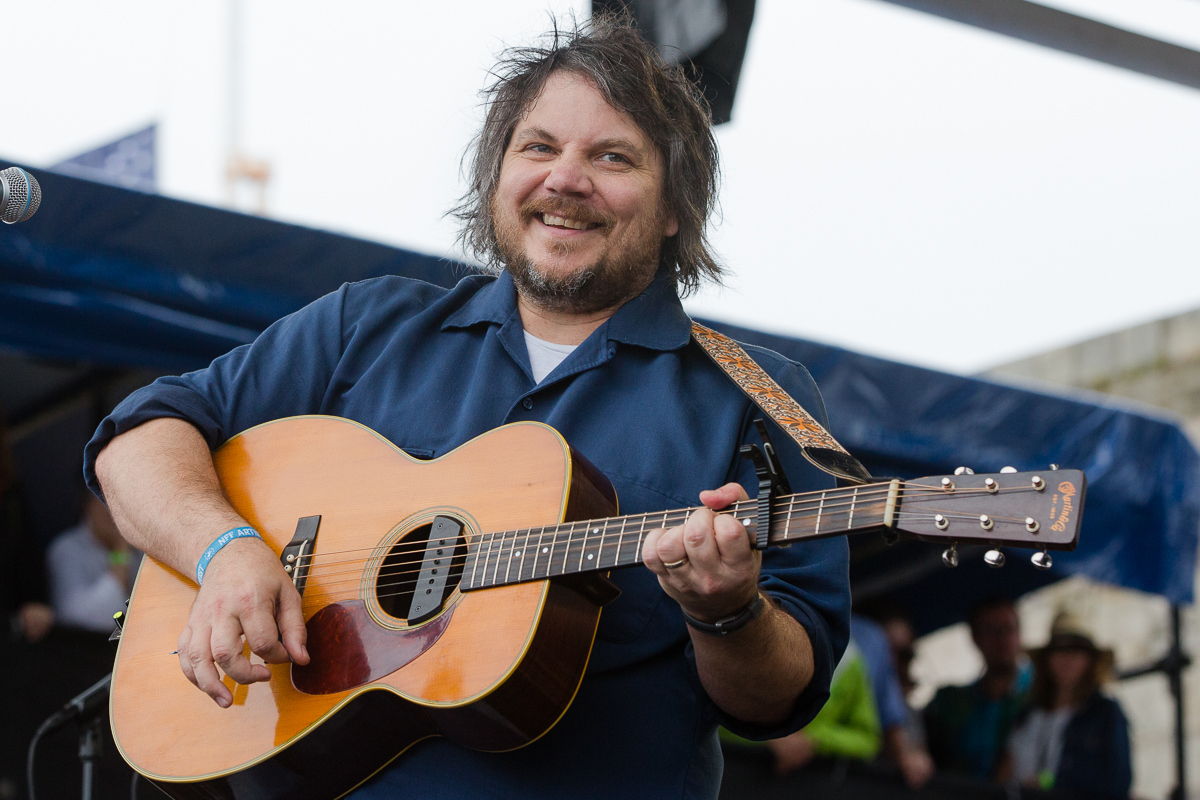 Jeff Tweedy was happy to be holding down the Fort

12 nylon strings and a taste for metal barely begin to describe the excitement, energy and intensity Rodrigo y Gabriela bring to their performances. These former buskers by way of Mexico City and Ireland are festival seasoned and utterly captivating. To catch them playing to the neighborly Quad Stage at Newport, many of whom didn’t know what hit them, was off the charts fun. 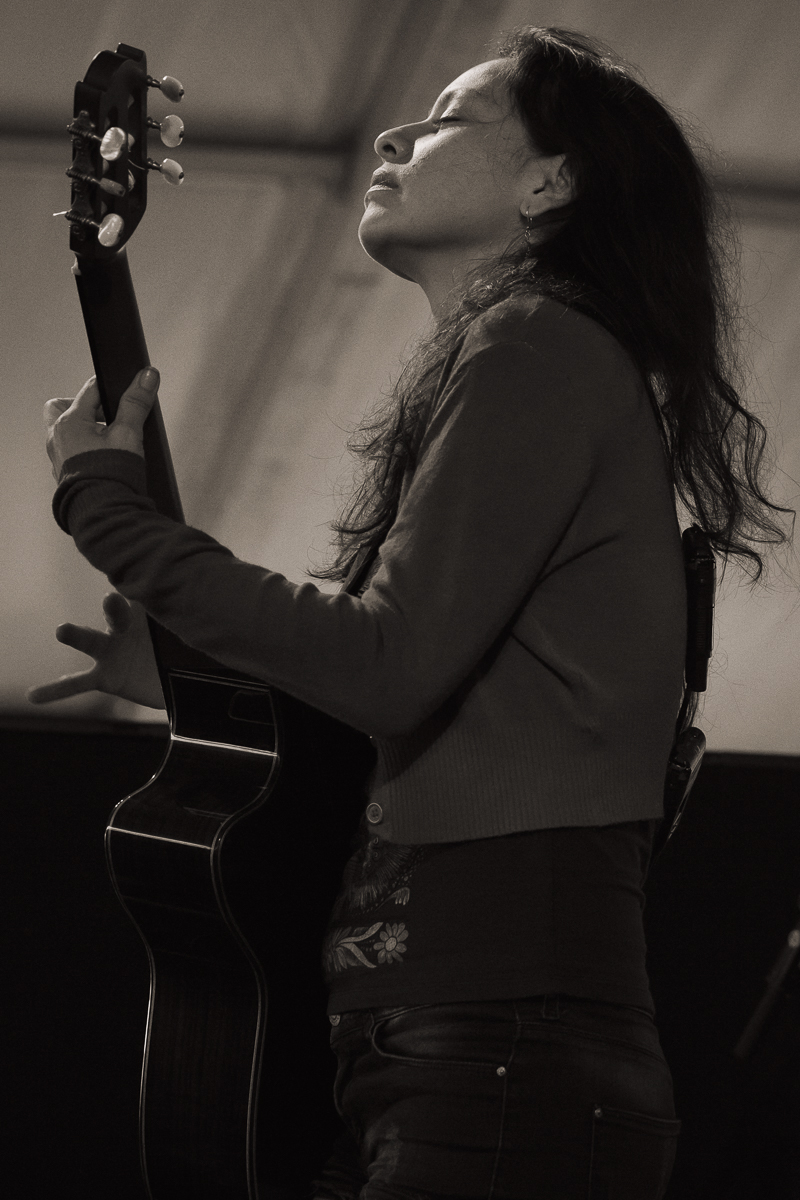 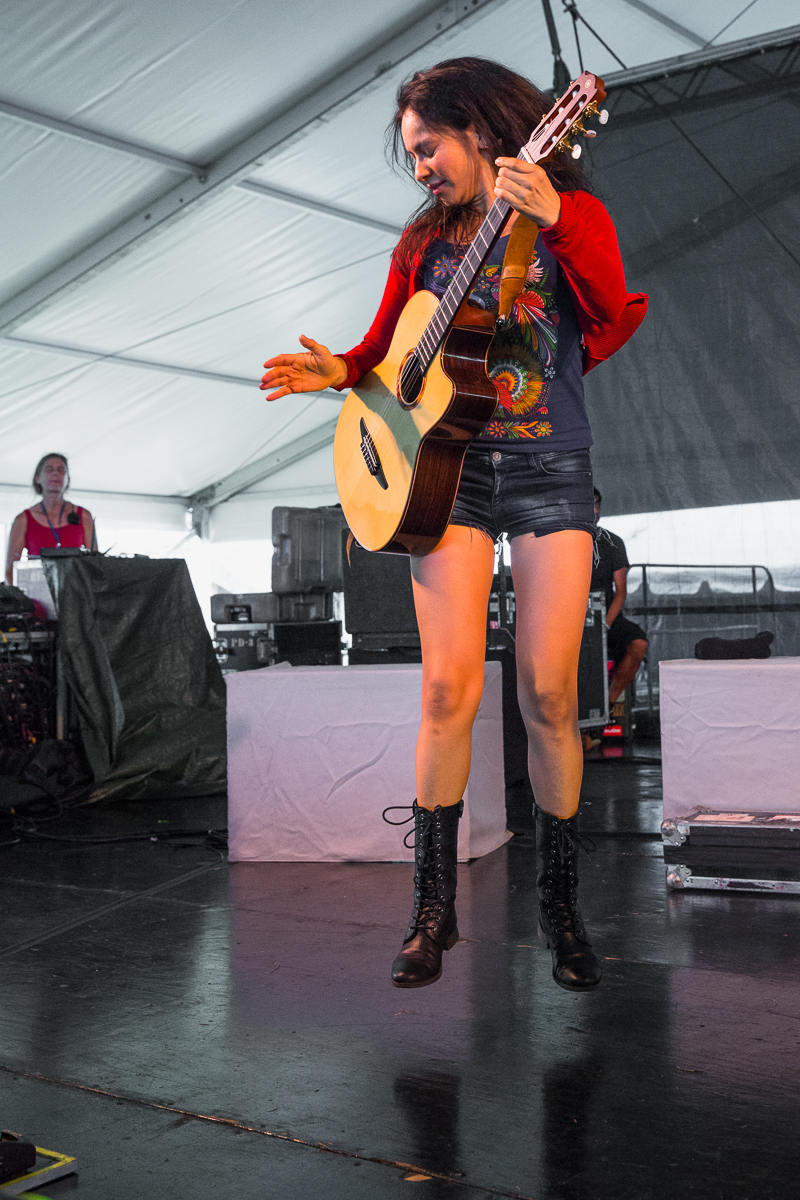 And she knows how to catch some air… 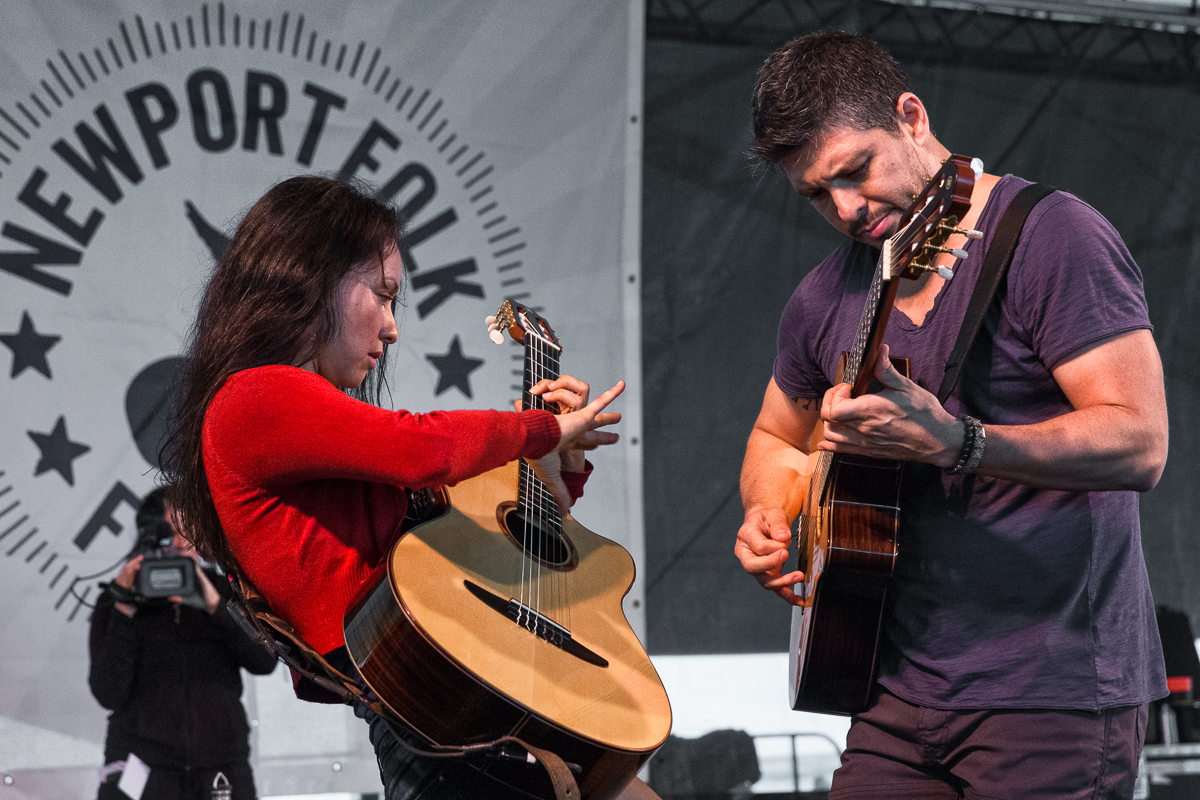 Rodrigo y Gabriela – 12 nylon strings and a taste for metal

The Fest closing slot went to Mavis Staples, who was introduced by Festival founder George Wein, now 86 (and “happy to be anywhere” at his age, let alone introducing Mavis Staples, who celebrated her 75th just a few weeks before). She had me at her take of the Talking Heads “Slippery People”, long before she covered “Respect Yourself”, “The Weight” (with guest Norah Jones and Taylor Goldsmith of Dawes) and an all hands “We Shall Overcome” encore. Alas, I left before Mavis finished, my only real regret of a day in which I covered 14 of 21 acts in some form or another. 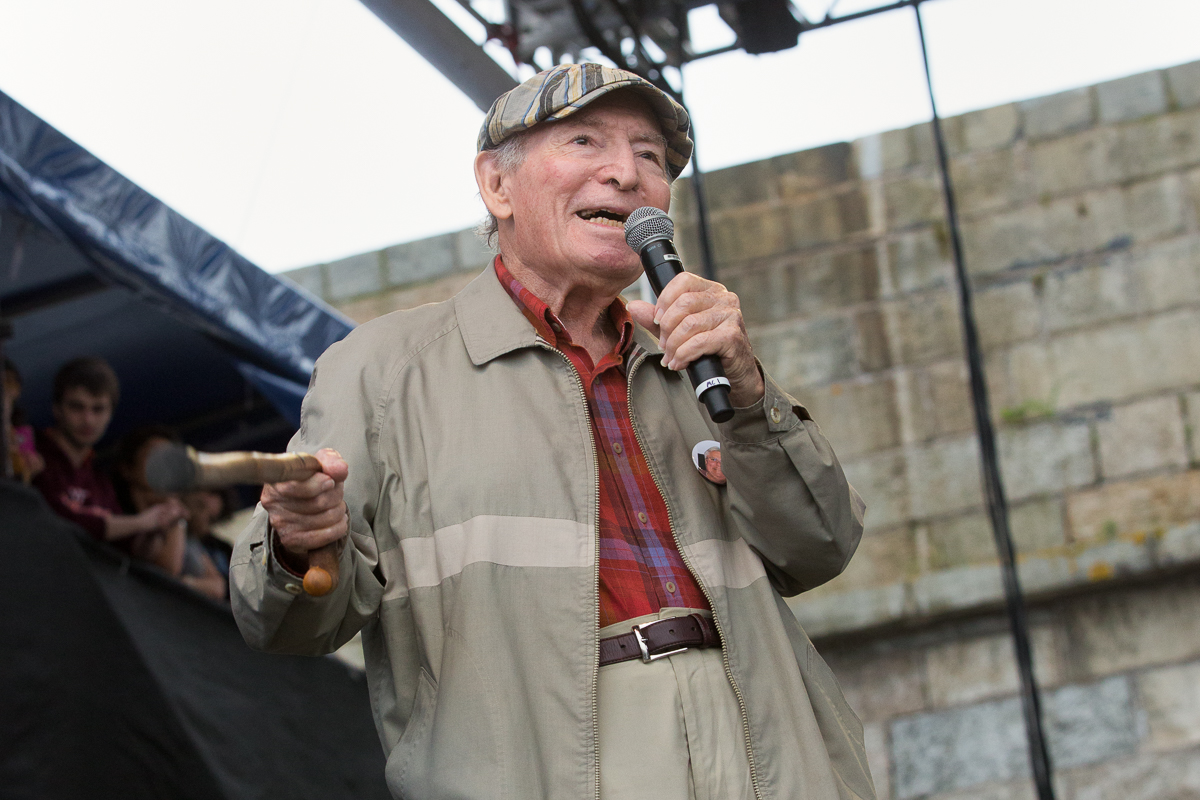 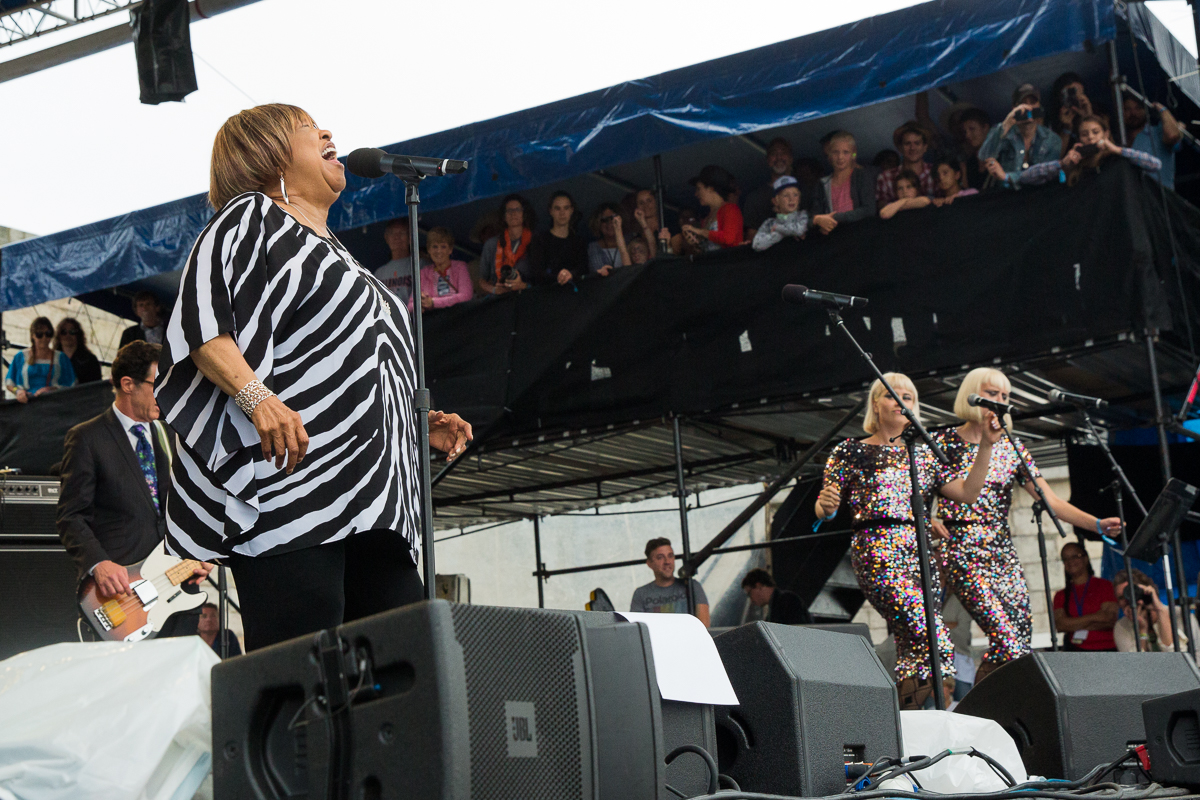 Mavis Staples knows how to close

The Newport experience is to be treasured. Its roots are deep and true, and as alive and vibrant today as they were in 1959. This is a festival where people come to listen, to appreciate and to honor the music, the songwriters and their stories. Heck, it’s a festival where Jack White can freely roam the crowd, take in some tunes, grab a few Polaroids and not get hassled. That’s Newport 2014.