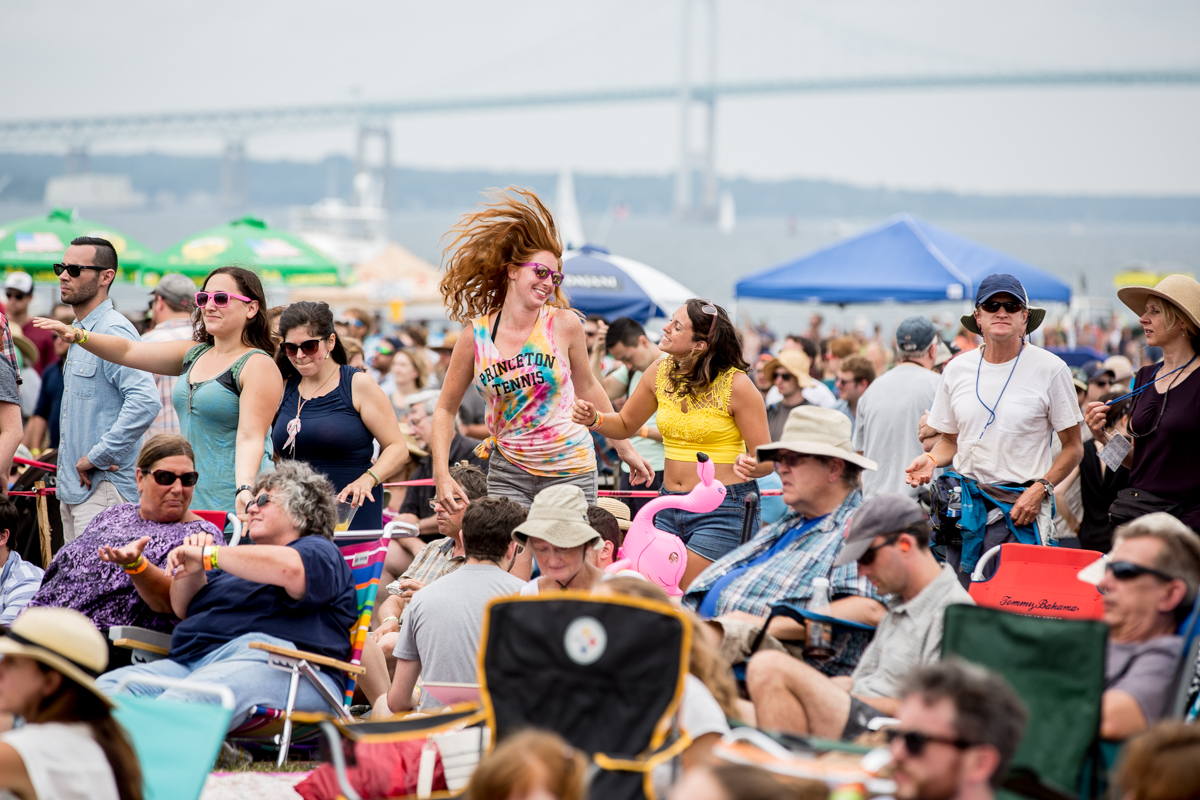 Proudly sitting on a half century plus of tradition, the Newport Folk Fest feels more like a mellow picnic with your pals and belies its legacy as one of the most important music events of past and present. With attendance capped at 10,000 and the historic Ft. Adams setting on Naragansett Bay, it is a personal, friendly experience. One where the event co-founder, 89-year old George Wein, is still scooting around the Fort shaking hands, talking to people and taking it all in. A gathering built of sturdy roots and tradition, one that honors the music first, and where most favor their ears, (and the space between them), over their smartphones.

I recently came across a HuffPo piece on whether music festivals have lost their mojo and devolved into customized super concerts for Generation Distracted. It’s a fair, but debatable point. And one that warrants further appreciation that Newport Folk exists at all. It’s hard to grasp now that just the mere act of plugging in by a young Bob Dylan in 1965 was taken as both rebellion and betrayal (still debated today). The stakes were that high (Elijah Wald’s excellent “Dylan Goes Electric! Newport, Seeger, Dylan, and the Night that Split the Sixties” is a brilliant primer on the Newport legacy and a very worthy read, even for the non-Dylan-philes). Yup, them times’ve certainly a-changed.

With the odometer on Dylan’s electric set hitting 50, Newport Folk 2015 was especially anticipated and sold out long before a single act was announced. I was able to drop in on Day 3, with the Fest closing ’65 Revisited cast only to be revealed when they hit the stage. Given that Day 1 featured an unannounced set by My Morning Jacket that morphed into headliner’s Roger Waters’ set, and Day 2 featured another unannounced surprise when James Taylor returned to the Newport stage for the first time since 1969, rumors ran pretty hot for Sunday.

Newport is about discovery. Under the radar acts finding their audiences, breakout folksters, roots and indie rockers, all bear Newport proudly. My day started with Christopher Paul Stelling, a much heralded songwriter who ended his set by proposing to his fiancée, singer Julia Christgau, who shared the stage. Caught a quiet moment with Ballroom Thieves, before jumping into Sunday church with the Berklee Gospel and Roots Choir and the totally joyful Jones Family Singers. Over at the Fort Stage, soon to be Colbert band leader Jon Batiste & Stay Human brought second line spirit to an Americana flavored set (and with his appearance the following weekend at the Newport Jazz Festival, became the first artist to play both events). Then Nathaniel Rateliff and the Night Sweats happened. I caught Rateliff in solo troubadour mode at last year’s Way Over Yonder Festival (also sponsored by Newport, but alas, not coming back), but nothing prepared me for the balls out set they dropped on the Quad Stage (just listen to S.O.B, and you’ll know what I mean). Not just another mashup of guitars, horns and hipster hats’n’tatts, Rateliff and the Night Sweats are the real deal, if not a full on rock and soul revival. One look at the synced up dancers outside the Quad Stage tent told that story. 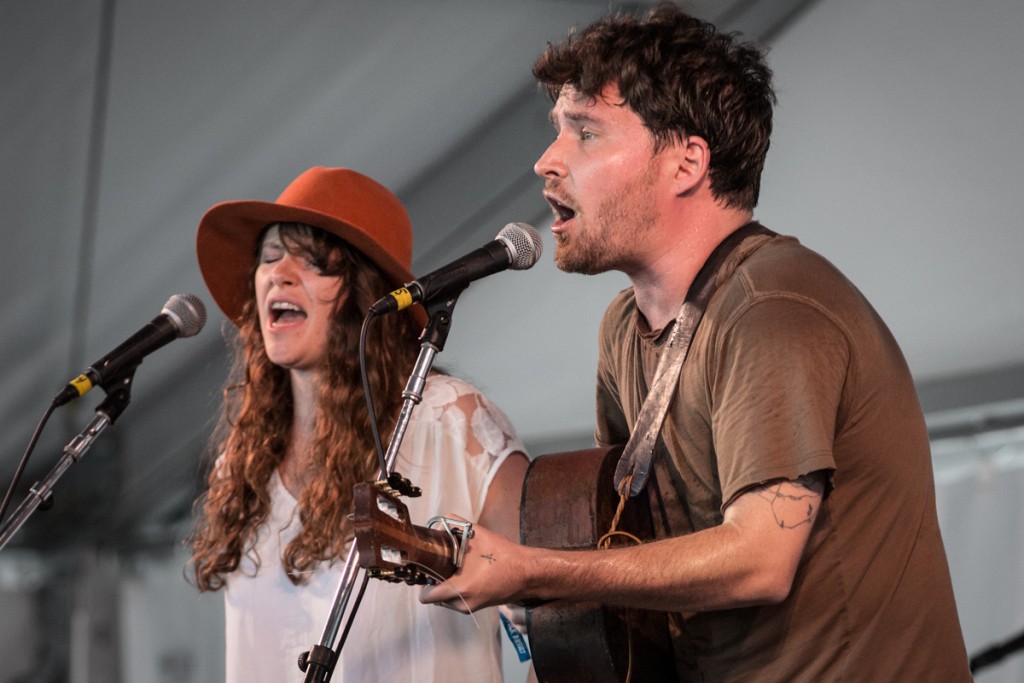 Christopher Paul Stelling and soon to be fiancee, Julia Christgau 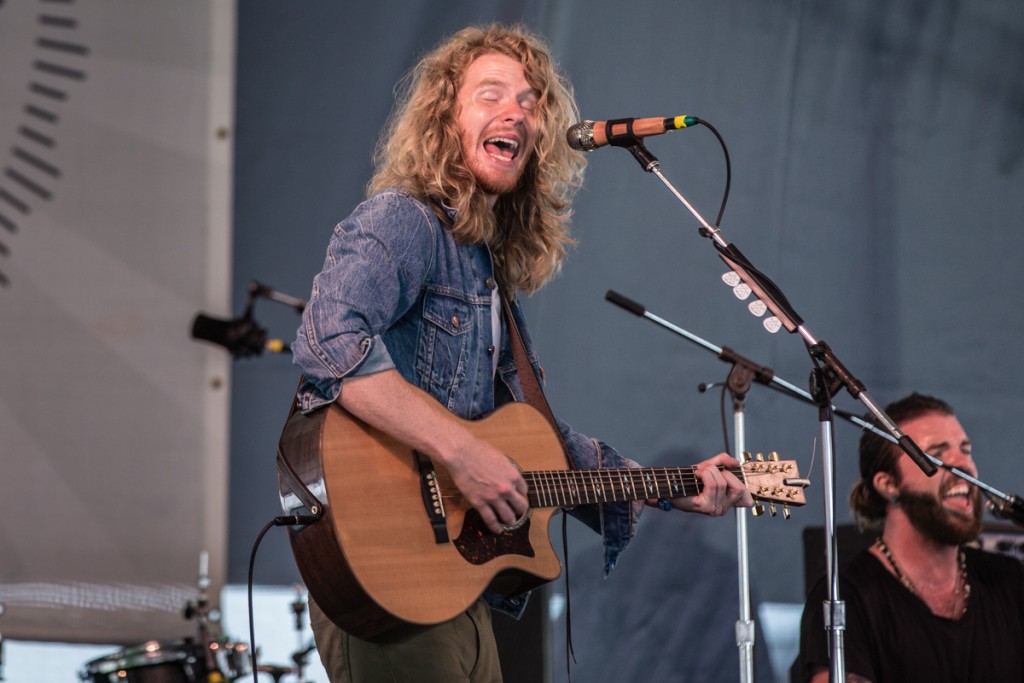 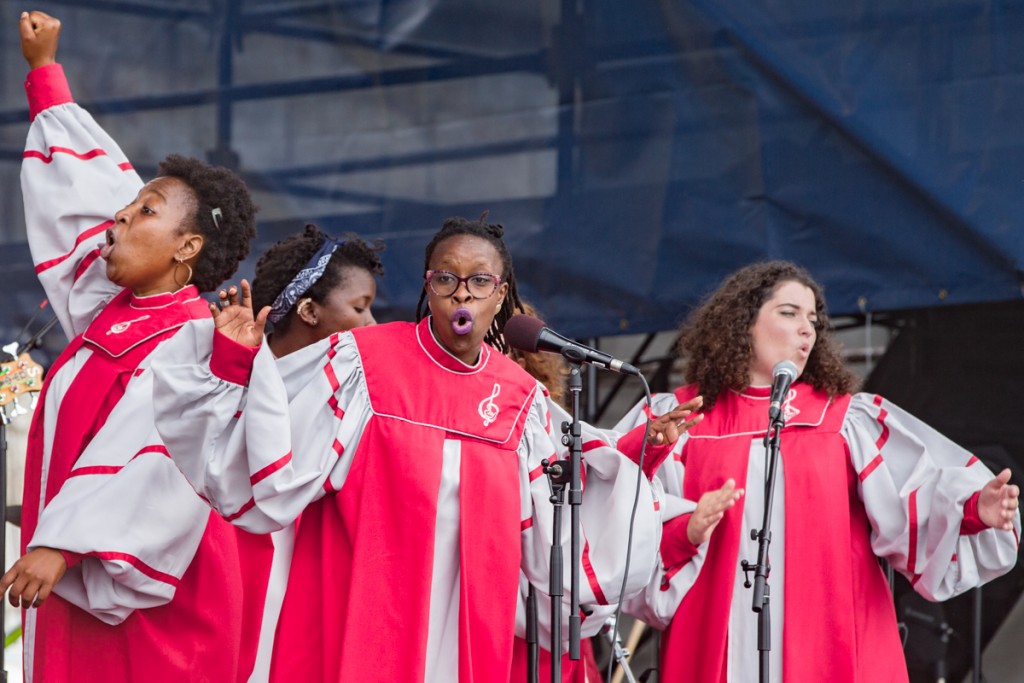 Sunday church with the Berklee Gospel and Roots Choir… 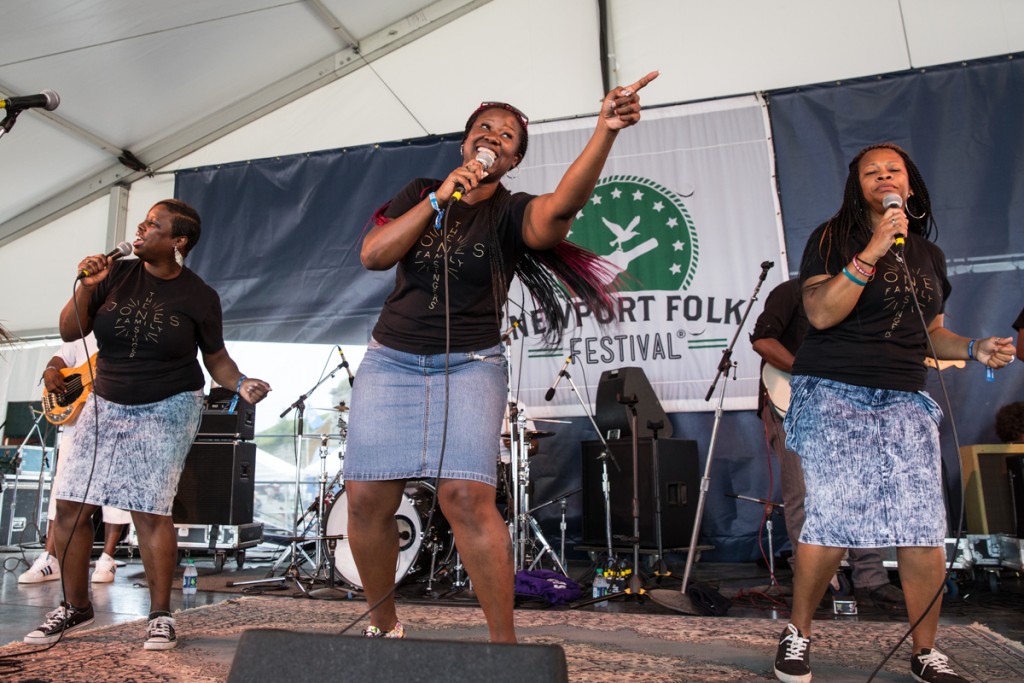 …and the Jones Family Singers 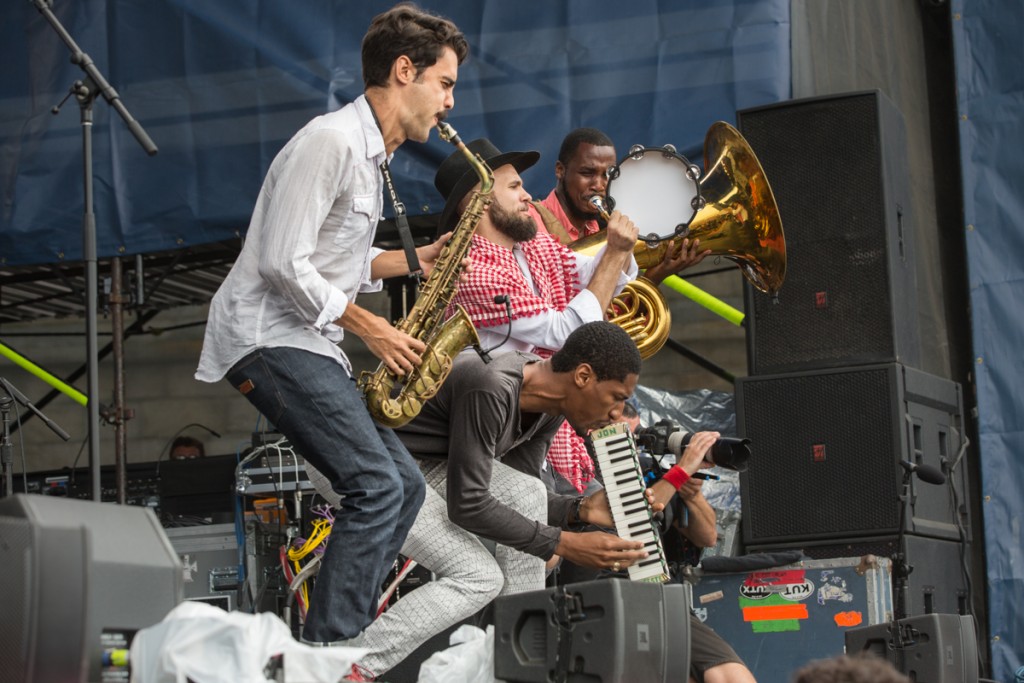 Jon Batiste and Stay Human, the first of a Newport twofer 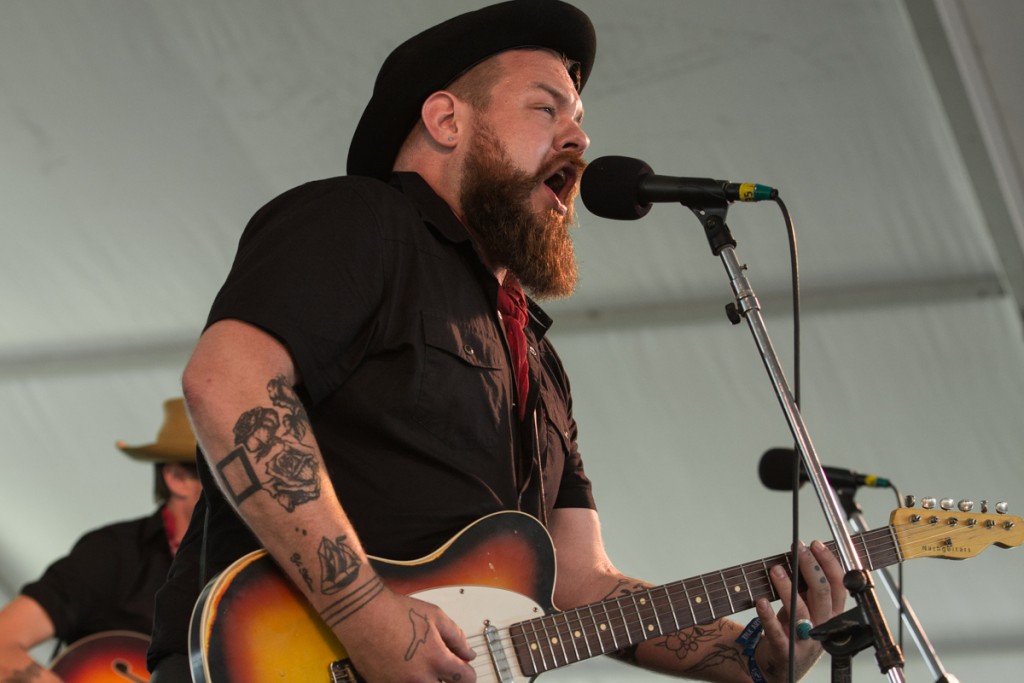 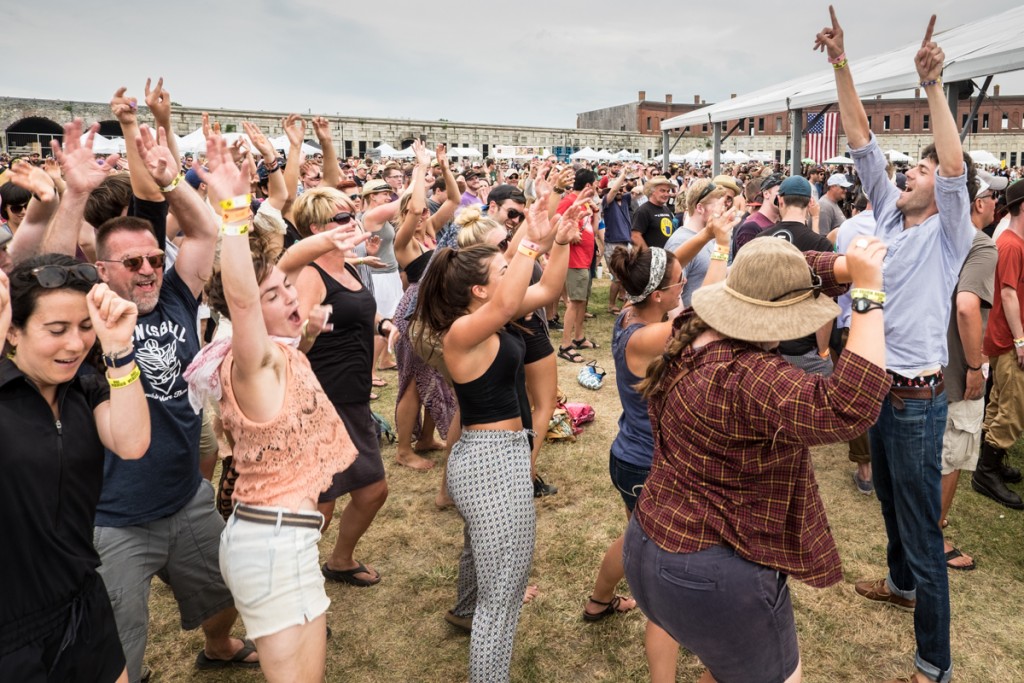 …and just outside, the faithful find their groove 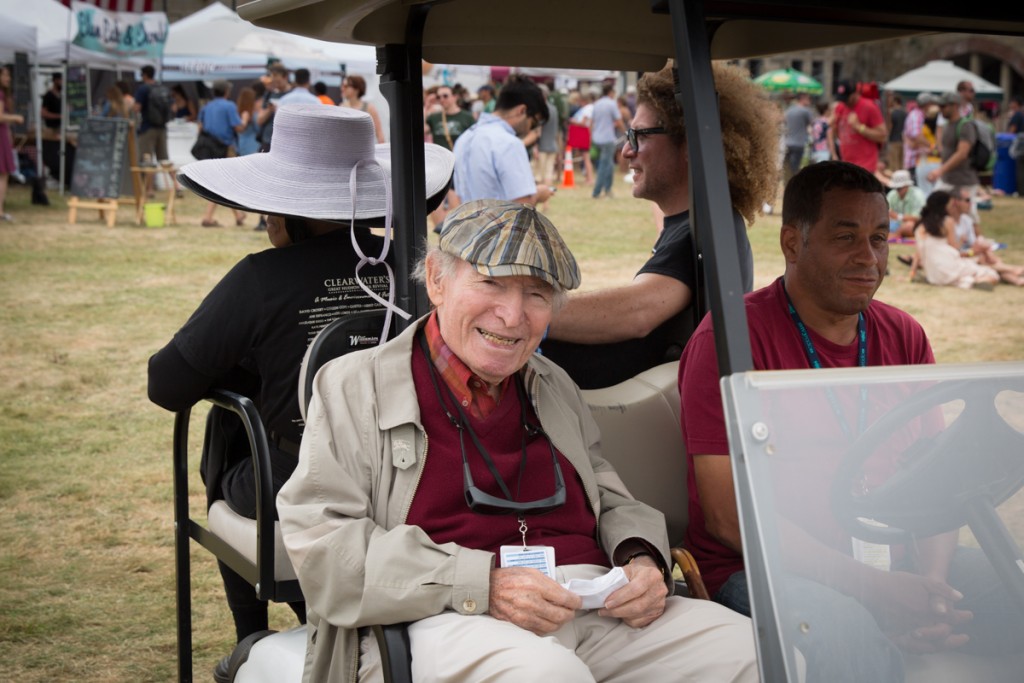 Made it to a little of L.A.’s Lord Huron back at the Fort Stage, but spent more time taking in the crowd and the breadth of the stunning bayside setting. Field Report and The Felice Brothers overlapped each other on the Harbor and Quad Stages, with the Felice Brothers drawing an especially enthusiastic audience. First Aid Kit’s Söderberg sisters were one voice down (Johanna could not sing), but even without the harmonies, they delivered one of the most enjoyable performances of the day (even managing to drop in a highly credible Black Sabbath cover (“War Pigs”), that had to be a Newport first. Blake Mills is completely worthy of the buzz (none other than Slowhand calling out Mills as “the last guitarist I heard that I thought was phenomenal”). What I caught was rugged and stripped, in the best way (Mills tore through “Paint My Masterpiece”) and the guy is totally unassuming. Laura Marling left me a little cool, the material a bit too distant for my ears, but I get why she has earned a following and in her element at Newport. Andrew Hozier-Byrne (aka “Hozier”) has had quite the ascent since he took the Harbor stage last year and I appreciate his trance bluesy playing and arrangements that adorn his huge popularity. Austin based Shakey Graves (Alejandro Rose-Garcia) had ‘em packed at the Quad Stage, while alt-rock king and Dinosaur Jr. lead man J Mascis displayed some serious solo wizardry, while fuzzing out on a Gibson cutaway acoustic. 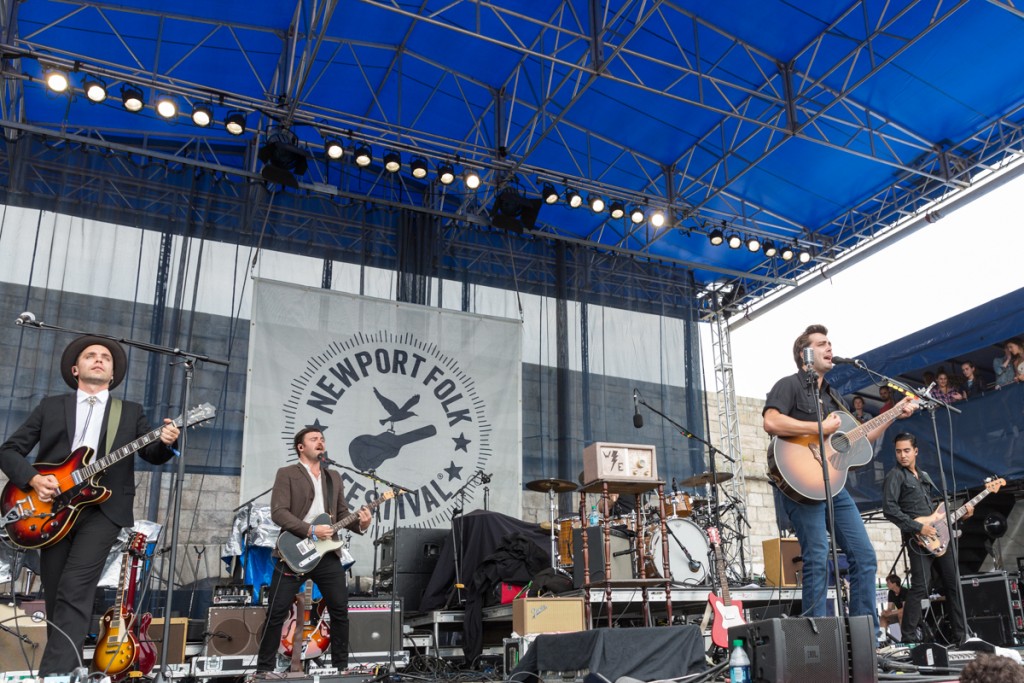 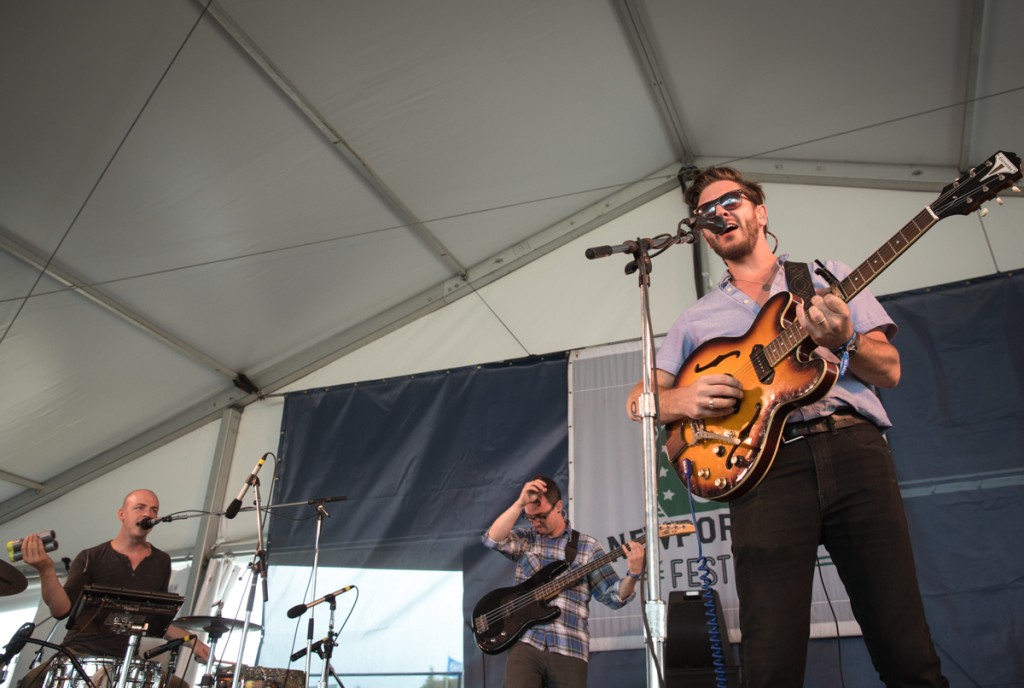 Field Reporting from the Harbor Stage 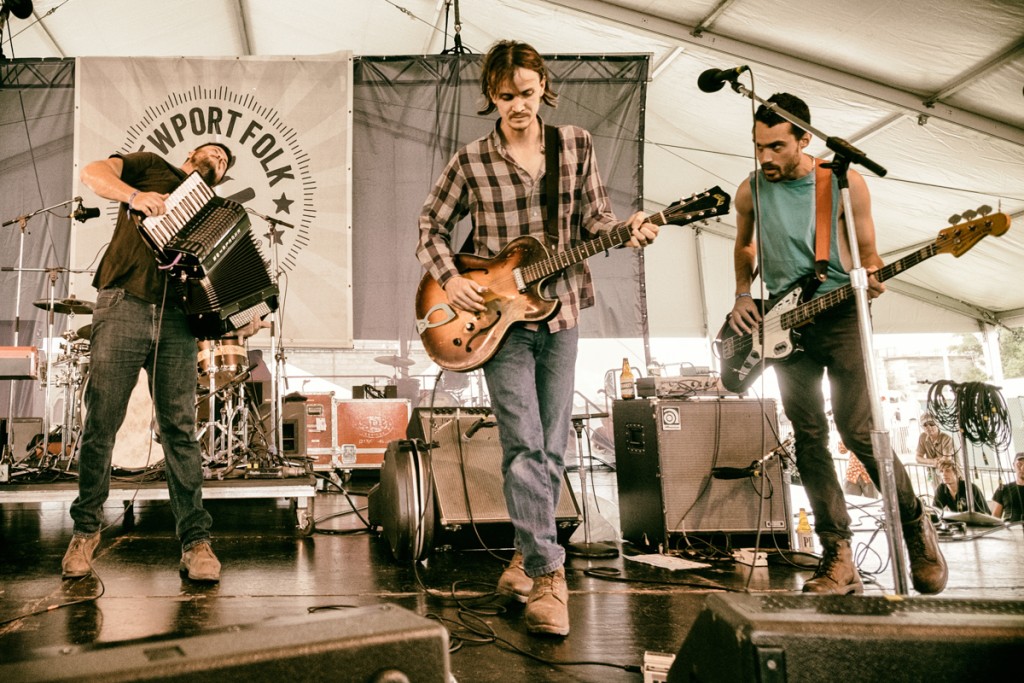 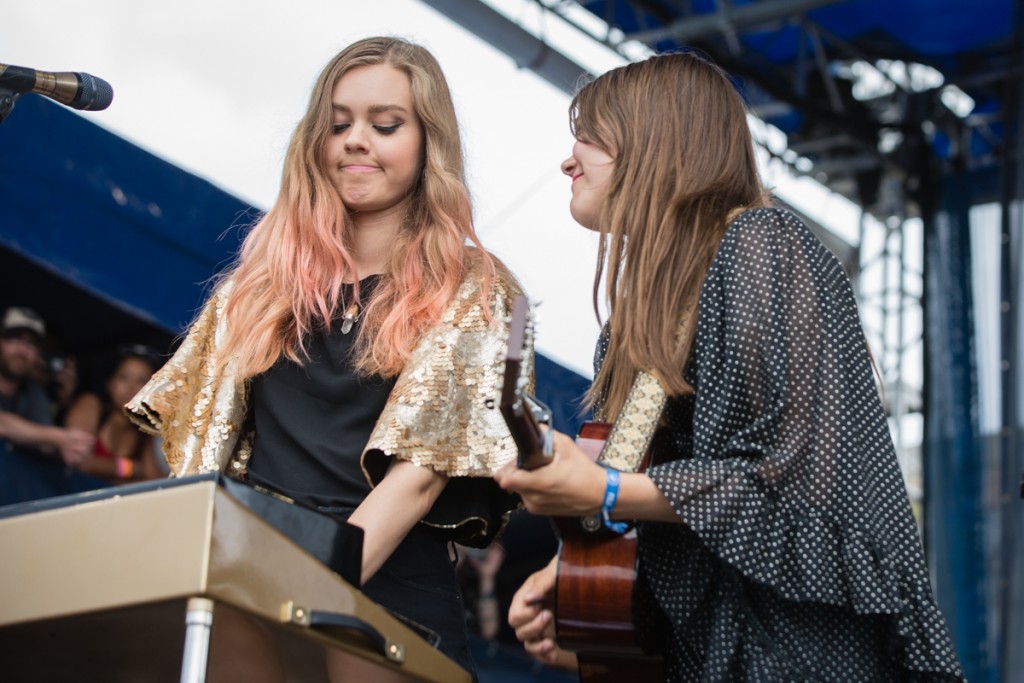 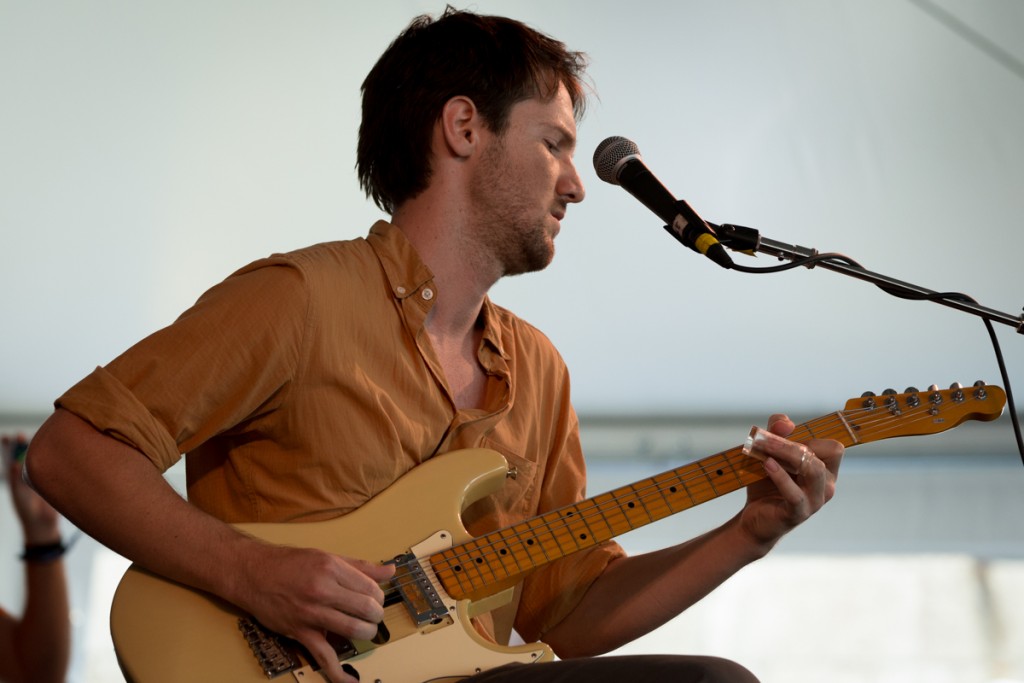 Blake Mills arrives with high praise from someone who should know 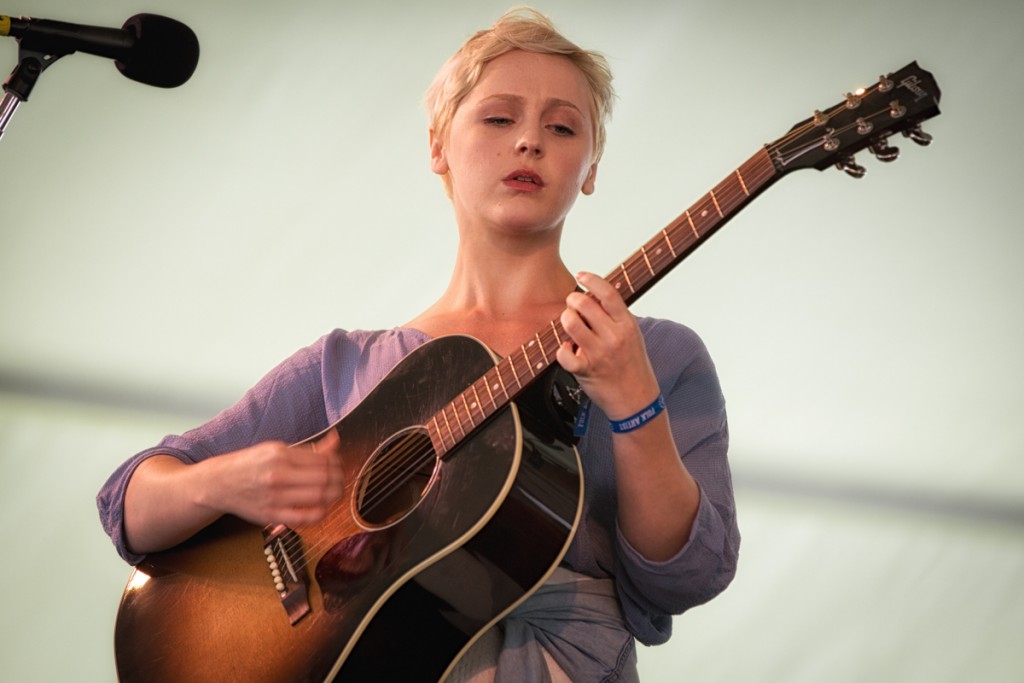 Songstress Laura Marling in her element 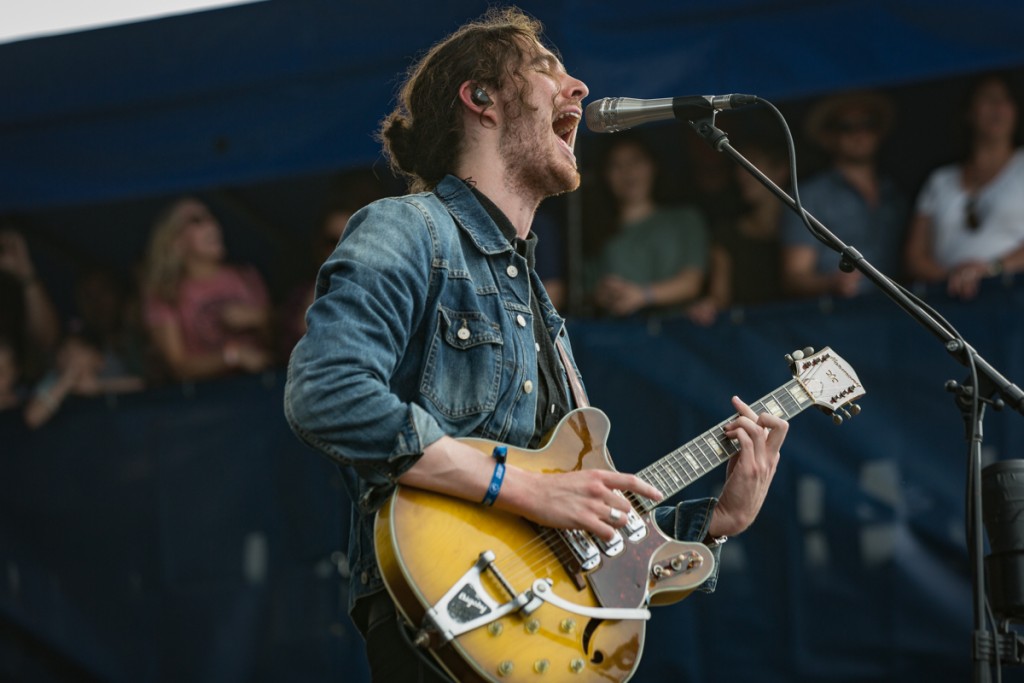 Hozier holds down the Fort Stage… 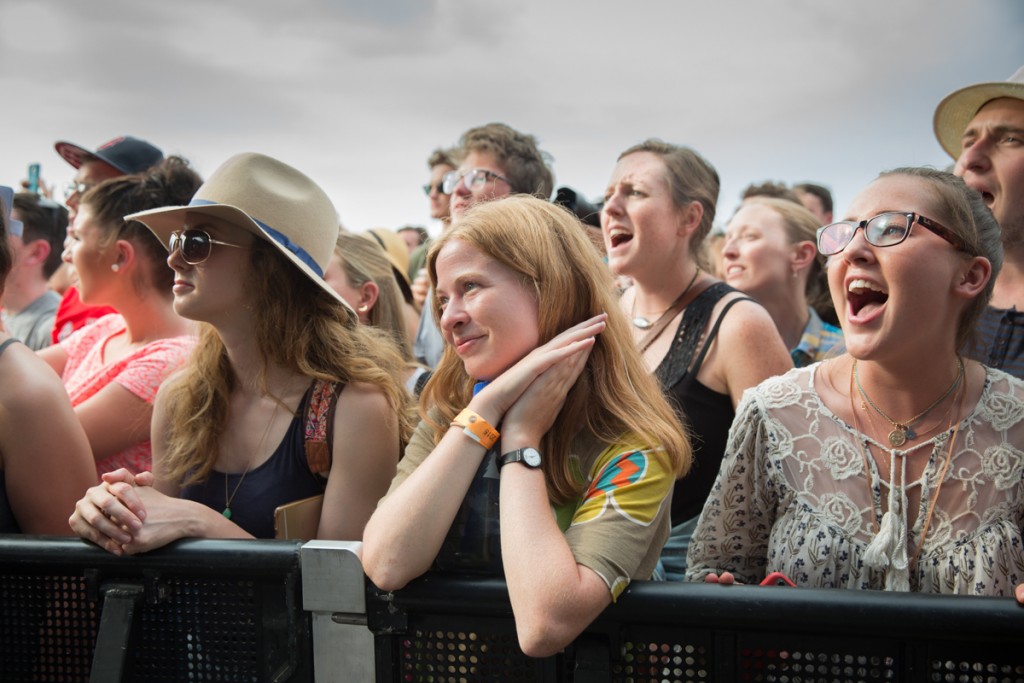 …and the attention of his fans 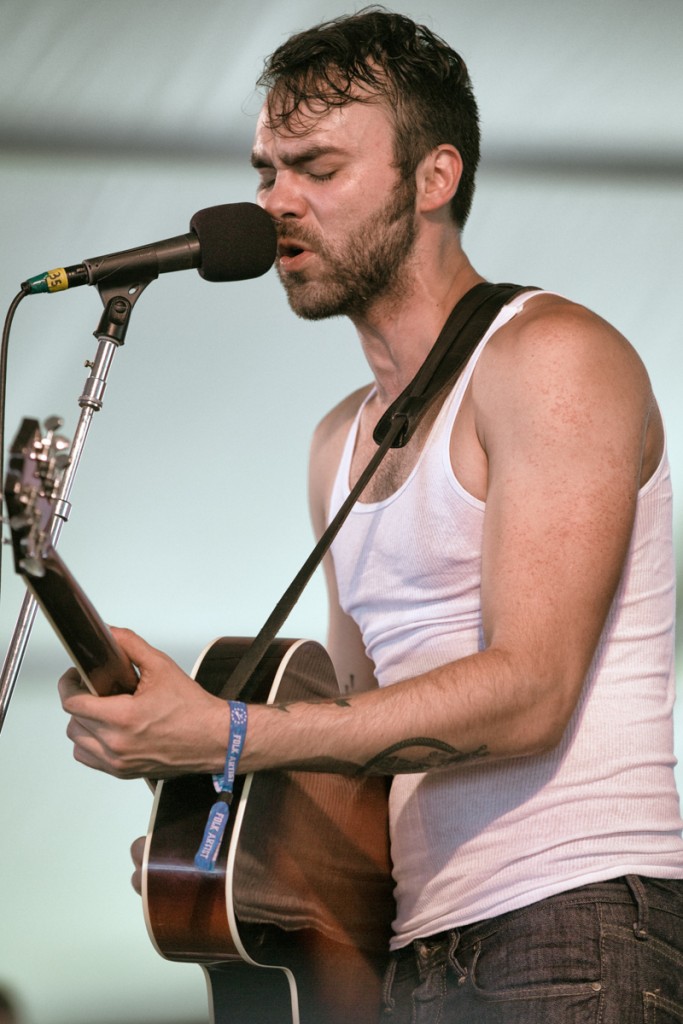 Not so Shakey Graves 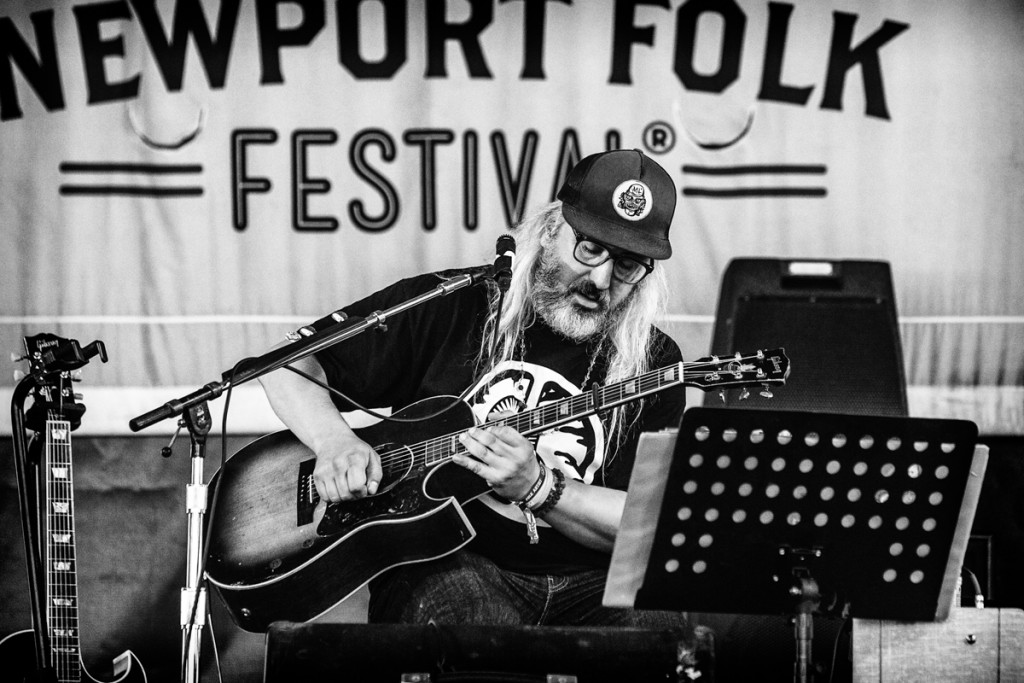 When ’65 Revisited was announced as the Festival’s closing act, producer Jay Sweet teased that the identities of the musicians and performers would not be known until show time, but that the spirit of a half century past would be fully embraced. No one really expected Dylan to return (although he has had a standing invite for years), but given the last minute adds to Friday and Saturday, expectations were, well, really high. Murmurs of Paul Simon, or even the Boss seemed plausible. The set opened with David Rawlings and Gillian Welch’s beautiful take on “Mr. Tambourine Man”. Old Crow Medicine Show’s Willie Watson then joined for “All I Really Want To Do” and “Love Minus Zero”, before ceding back to Rawlings and Welch for “It’s All Over Now, Baby Blue”. Dylan’s canon has been covered by so many artists over so many years, it is practically a de facto rite de passage, but with David Rawlings and Gillian Welch, it has rarely seemed in better hands. 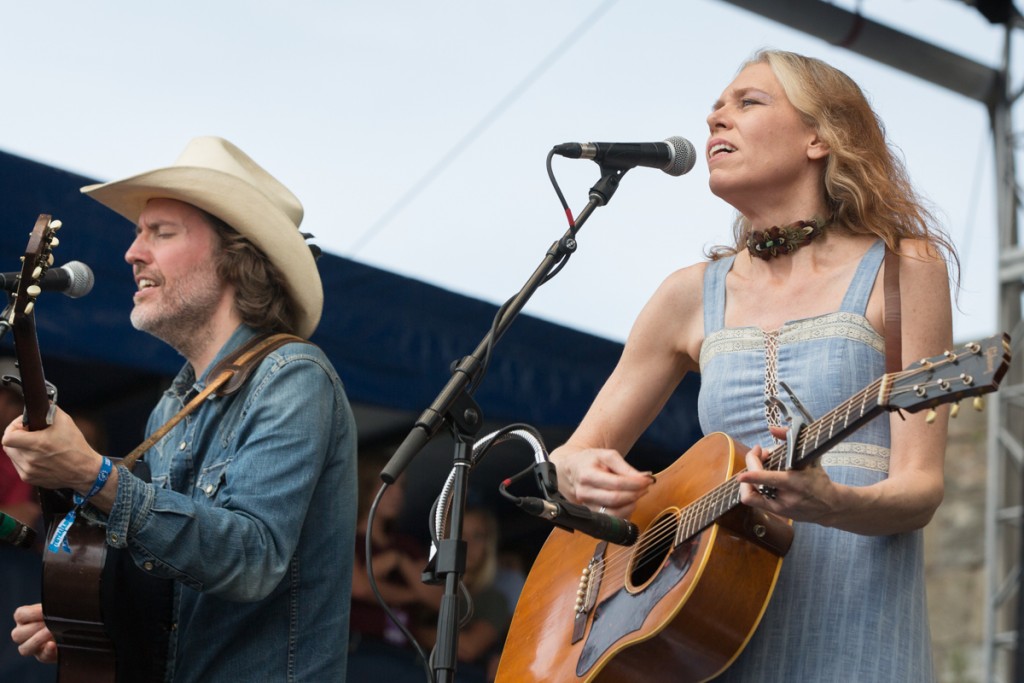 Taylor Goldsmith of Dawes joined for “Maggie’s Farm”, the game changing ‘65 opener (armed with Dylan’s Strat from that performance no less, on loan for the occasion). The stage thickened with the Preservation Hall Jazz Band horns and Al Kooper on keys (who backed Dylan in ’65), as well performers from throughout the day including Hozier, Blake Mills, Duane Betts, Klara Soderberg of First Aid Kit, and drop ins Robyn Hitchcock, and John McCauley and Ian Patrick O’Neil of Deer Tick, as they took on “It Takes A Lot To Laugh, It Takes A Train To Cry”, “Just Like Tom Thumb’s Blues”, “Outlaw Blues”, “Just Like A Woman”, “Visions of Johanna” (“maybe the greatest song ever written” per Hitchcock), and “One of Us Must Know (Sooner or Later)”. By the time the opening strums of “Like A Rolling Stone” hit, any letdown from MIA “special guests” had long evaporated, 10,000 voices belting “how does it feel?” as one will do that. The only way to close this out was with a totally raucous, “Rainy Day Women #12 and 35”. The Pres Hall horns soaking the chorus with drunken swagger, and just about every performer from the day getting in the act (heck, the sight of Gillian Welch strapped into the Pres Hall’s trademark bass drum was pretty indelible). 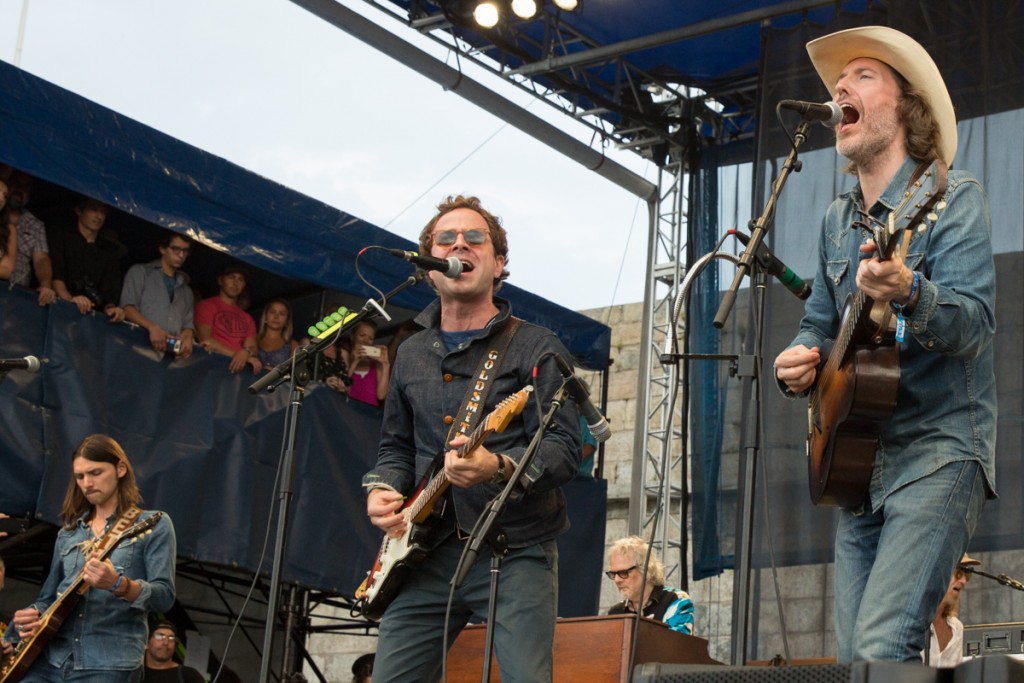 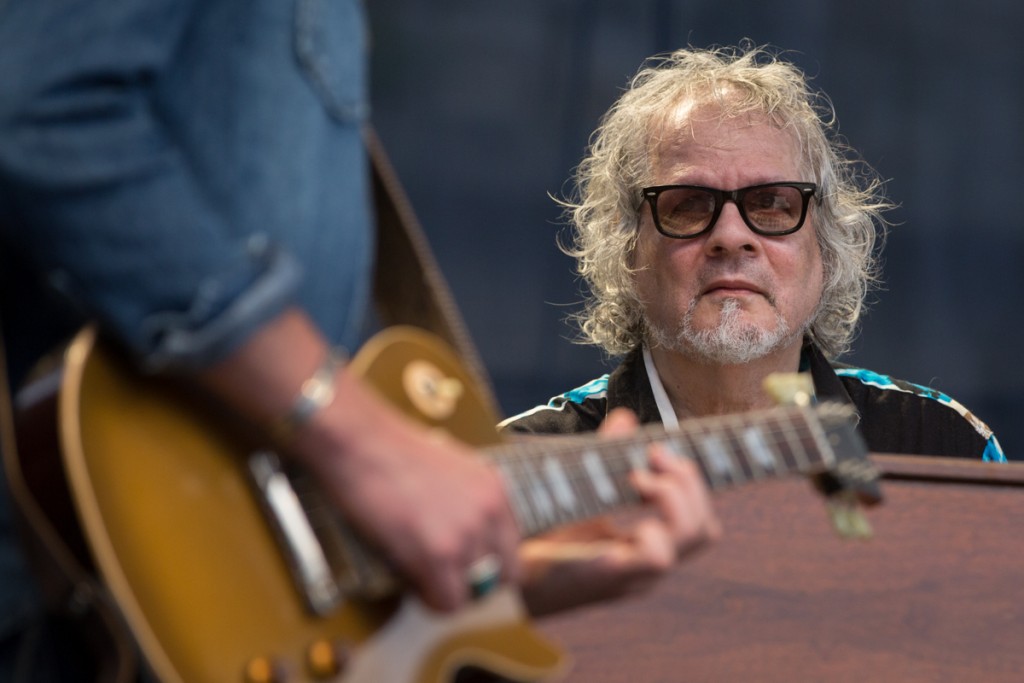 Newport Folk is still making history. With festivals du jour and curated experiences for sale, it is more important than ever. It is a living testament to how the past informs the present and shapes the future. Just look back 50 years. Then put July 22-24, 2016 on your calendar. 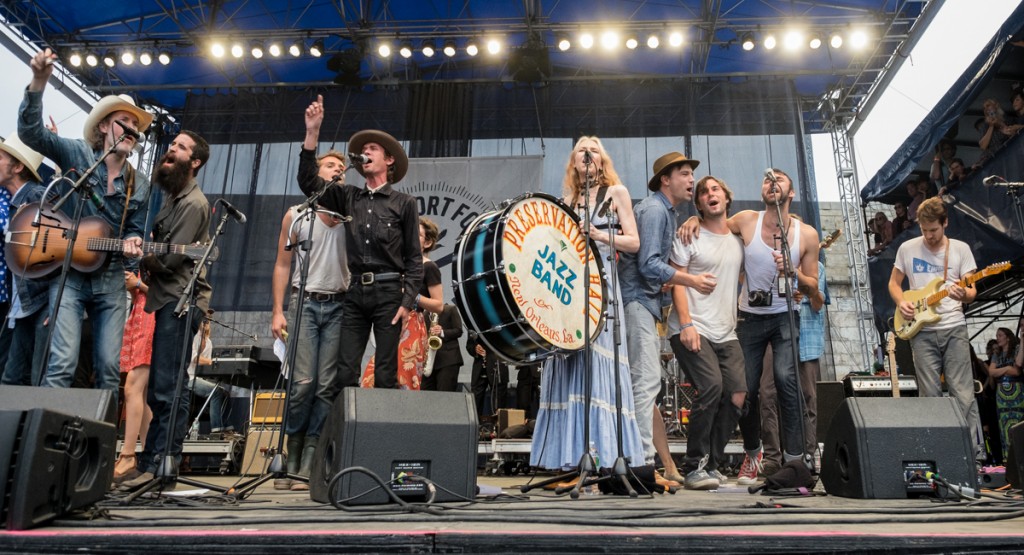 Robert Walter Residency, with the 20th Congress, The Mint
0 replies