Newport Jazz. Coltrane’s last performance. History that reaches back to 1954. And, yes, the oldest annual jazz festival in North America is still under the stewardship of founder George Wein for one last year. Newport, along with the Monterey Jazz Festival on the West Coast in September, stands taller than the rest and for good reason. The stunning Ft. Adams setting, the showcase for fresh directions and emerging acts, and the legacy of musical giants past and present all converge for an event that has long been on my jazz bucket list.

Having the good fortune to drop in at Newport Folk the past few years, this was my first shot at Newport Jazz, which retains the stage layout from the previous week’s Folk Fest. The smallest tent is barely more than a dozen rows deep, while the largest stage is set against a backdrop of breathtaking bay and bridge views. Both events are incredibly relaxed and attendance is capped at 10K, creating one of the more intimate festival experiences of any year. Sure, the crowd and vibe skew differently between weekends, but damn if jazz isn’t alive and well in the Northeast, and a younger Millenial slice was hard to miss throughout the weekend. Whether from the mix of ocean spray and daylight, for performances often relegated to late night sets and last calls, or the draw of jazz benders like Kamasi Washington and Robert Glasper (interestingly playing opposite each other on Sunday), it was great to see. 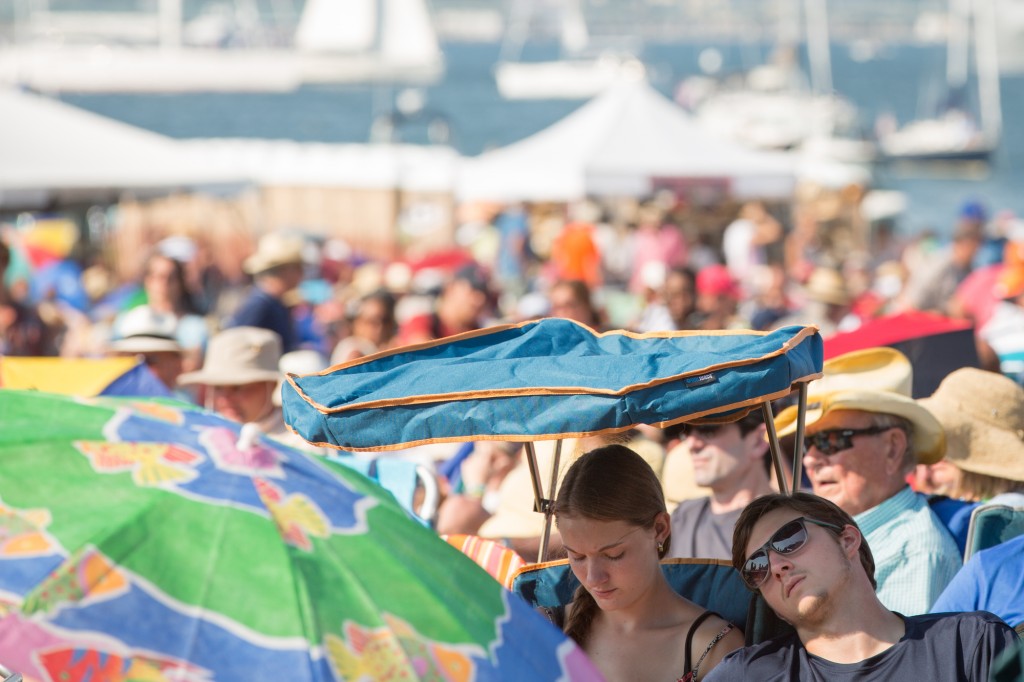 The stunning setting and relaxed vibe at Newport Jazz

The lineup over the two (of three) days I attended also included Chick Corea in the good company of Brian Blade and George Wein’s artistic heir to the Fest, Christian McBride, The Bad Plus taking on Ornette Coleman’s Science Fiction, the very old soul and remarkable talent of 13-year old Joey Alexander, Joe Lovano and John Scofield’s quartet, Charles Lloyd (who I last spotted sitting in with Lucinda Williams and Bill Frisell in a magical February performance), Christian Scott’s Stretch Music, and a new quartet anchored by Dave Holland, not to mention crowd pleasing favorites Norah Jones (who also headlined Newport Folk the weekend before) and Gregory Porter, the infectious world dance spirit of Angelique Kidjo and vocalist Lizz Wright.

Unlike the expanse of larger fests, stages are relatively close and distances manageable, whether you like to bounce around or just throw down a lawn chair and hang at the Fort Stage. I hit about half of the 19-20 acts each day and with set times running 50-75 minutes, was on the go most of the time, but still managed to absorb an amazing spectrum of sounds.

Saturday was the first sell out in some years, and Norah Jones probably had a little to do with that. Joe Lovano and John Scofield’s quartet held the Quad Stage earlier in the day like the old Berklee chums that they are. I was unexpectedly captured by moments of Ethan Iverson, Reid Anderson and Dave King’s (aka, The Bad Plus) Sci-Fi excursion augmented by cornet, trumpet, soprano and alto. And King, like Brian Blade (who had a busy day), is a visually expressive player I just love to shoot. Joey Alexander returned to Newport with his trio and how a 13-year old swings like that is beyond me (though his set was the only time a photo pit was a bit unmanageable). The outstanding trio of Corea, Blade and McBride really was stellar, and Chick brought the crowd right into it with a call and response to the first few notes of “Light as a Feather”, followed by Miles’ “All Blues”. Their traffic shortened set (more on that later) closed with Chick’s “Fingerprints”, his answer as it was, to Wayne Shorter’s classic Blue Note “Footprints”. Henry Butler, Steven Bernstein and the Hot 9 were a rollicking New Orleans by way of Brooklyn mash up under the exuberant hand of trumpeter/bandleader Bernstein. Brian Blade caught a short break before also holding down the stool for Norah Jones on the Fort Stage. Covering most of her best known tunes that I can’t imagine veered much from her Folk set the week before, they are still as lovely now, as when I first heard them, and I have always gotten along with her black keyish piano accompaniment. As the day wound down, 72-year old Monty Alexander shared his Newport debut pride on the Quad Stage and not long after, vocalist Gregory Porter had the closing set at the Fort Stage. At Porter’s set, I got talking with a dude who knew him from the neighborhood and went on about what a super unassuming guy Porter is, and how he’d sing for restaurant patrons where he worked. An early exit after the full day was appealing, so I cut out before Porter’s set finished only to be caught in the mother of all grid lock from a water line break that shut down the main streets in town (and held up Chick Corea en route). Between the 50 minutes to exit a remote lot (and there is only one exit from the park) and the hour plus to get through town, I covered about four miles in just under two hours. 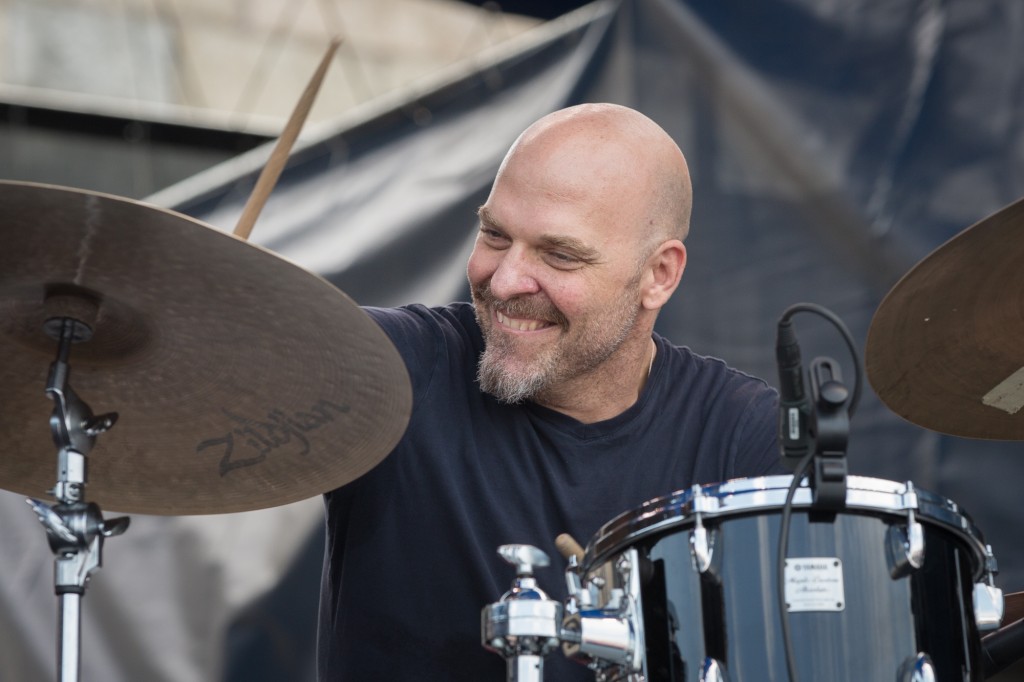 Dave King of The Bad Plus 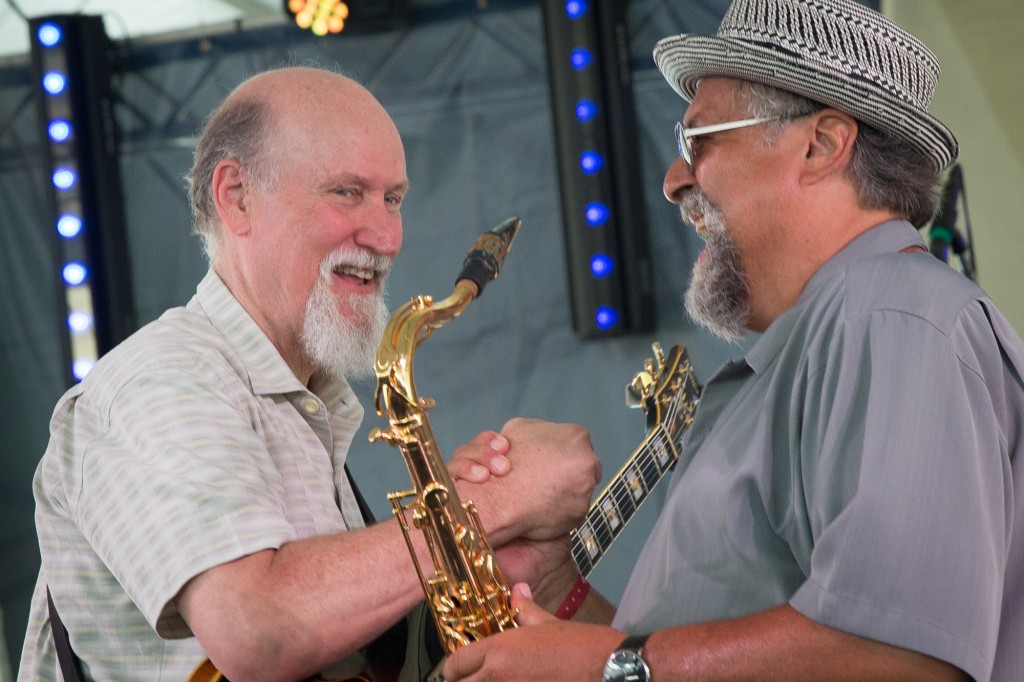 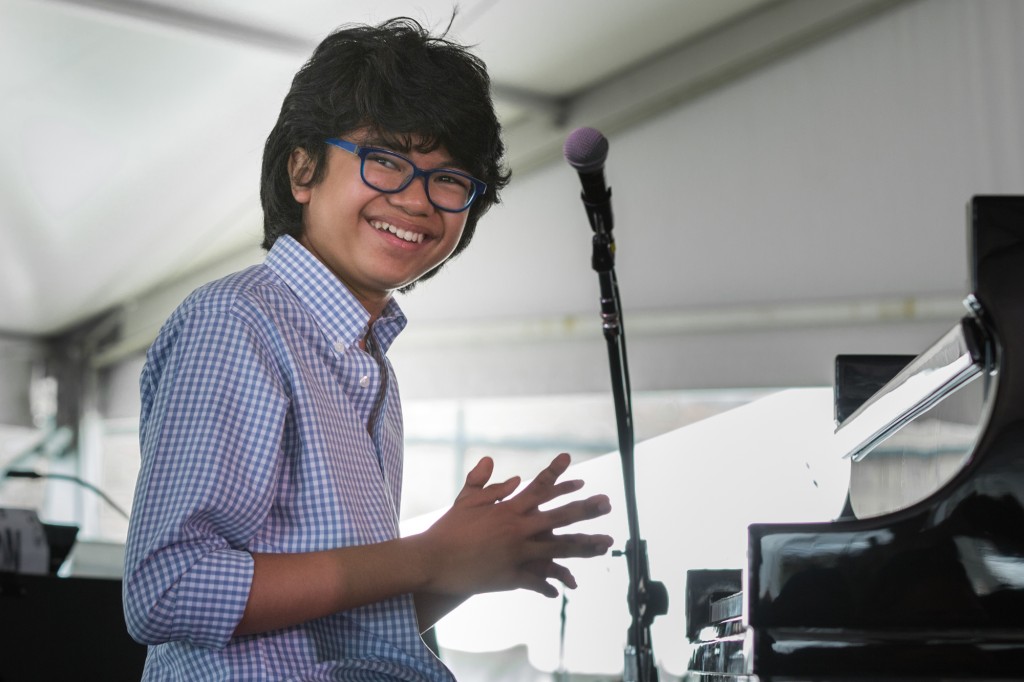 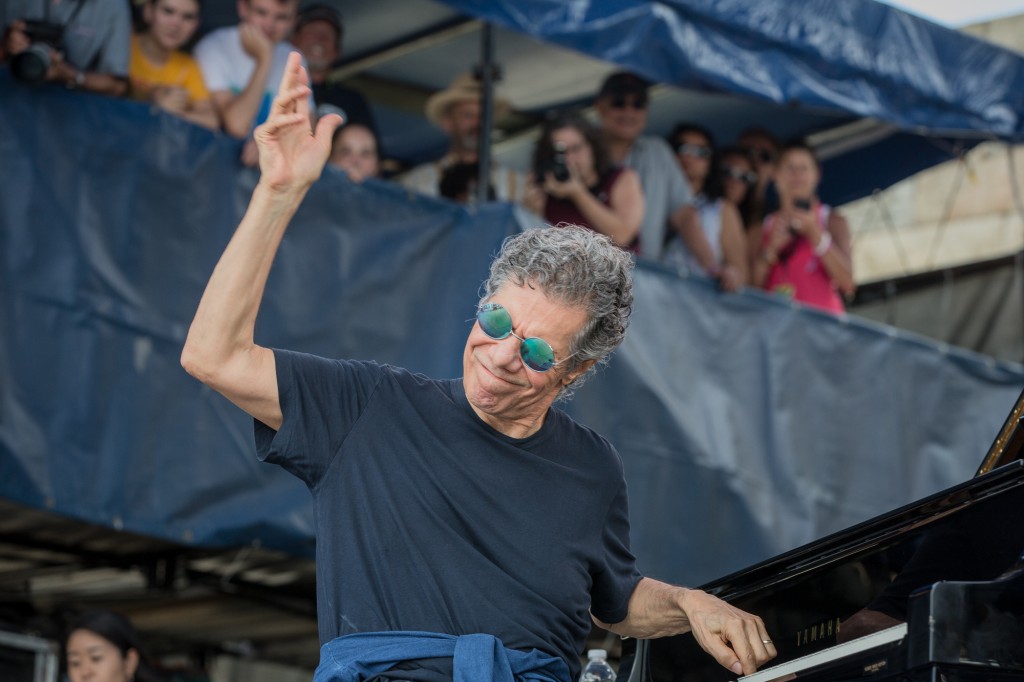 Chick Corea at the start of his set… 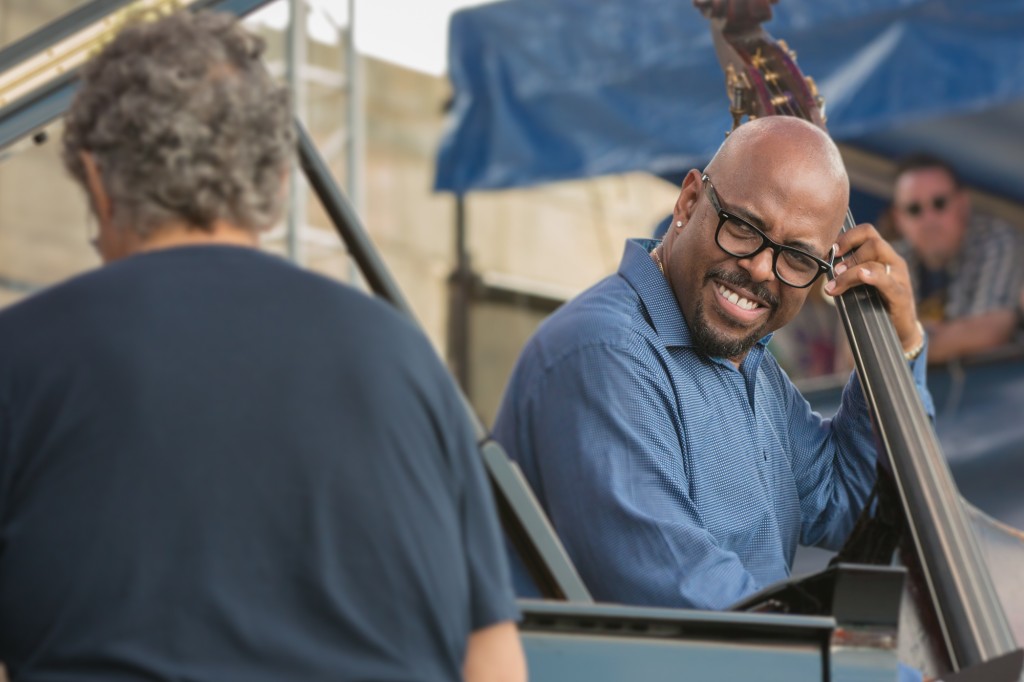 …with incoming Artistic Director Christian McBride holding it down 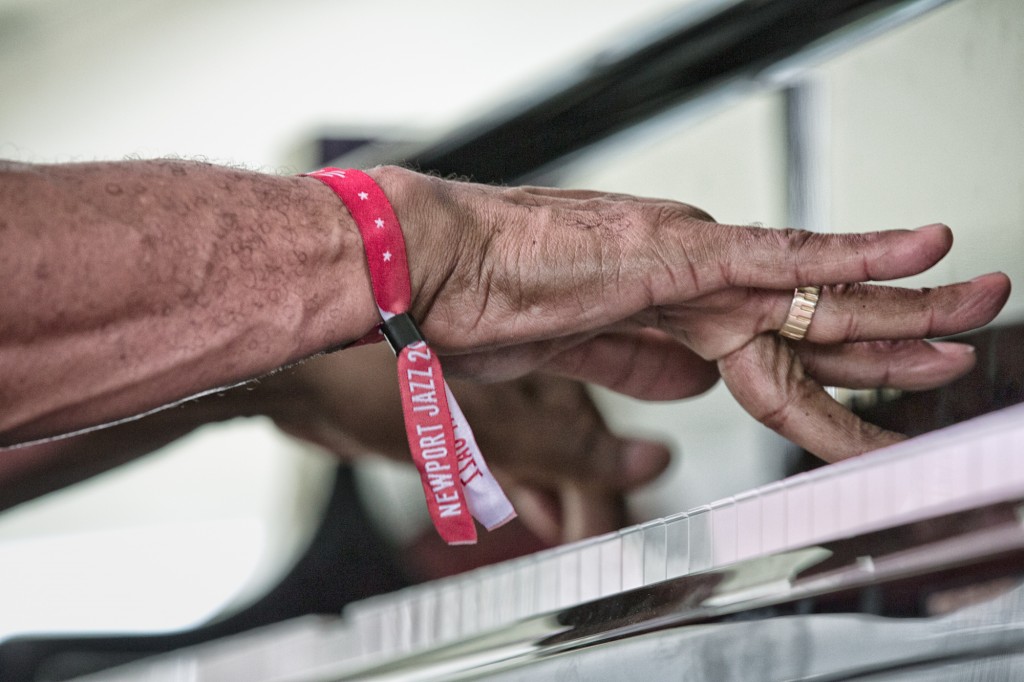 The fleet fingers of Henry Butler 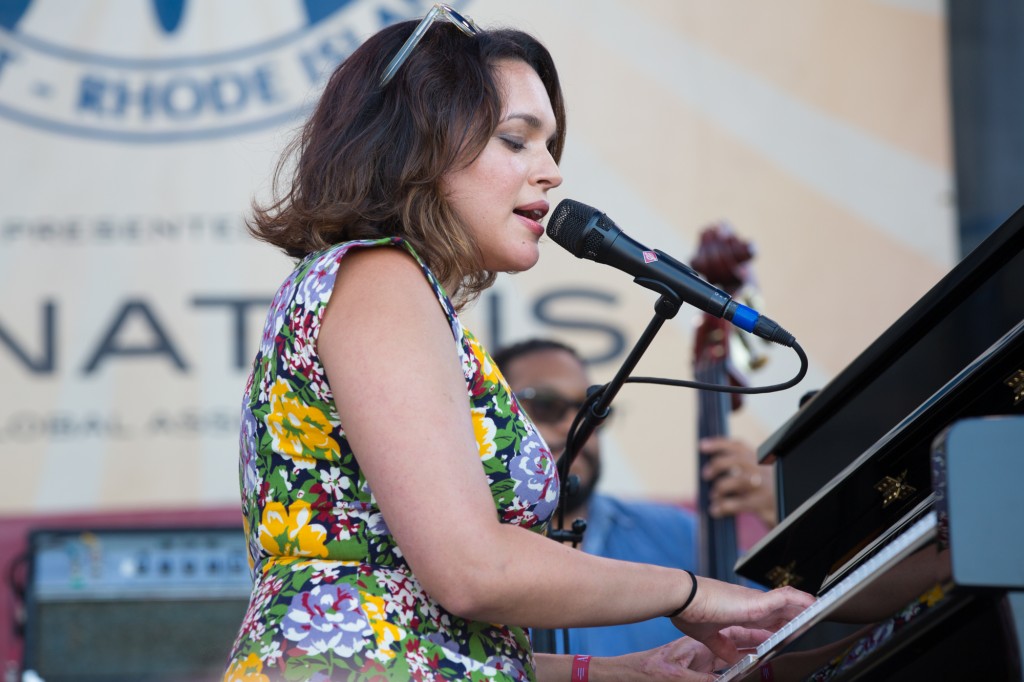 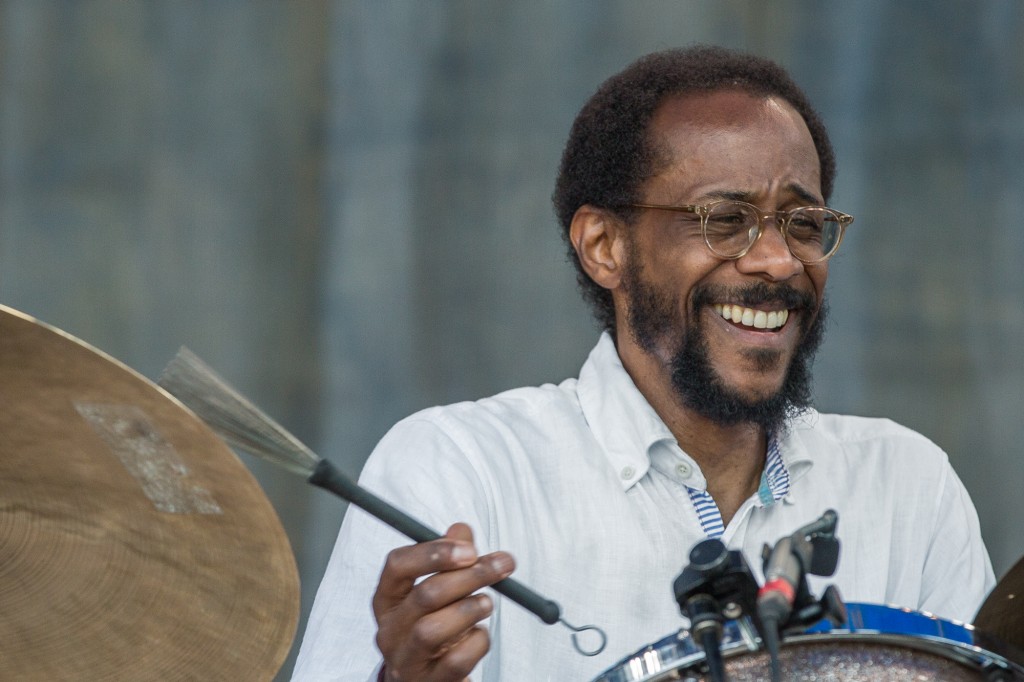 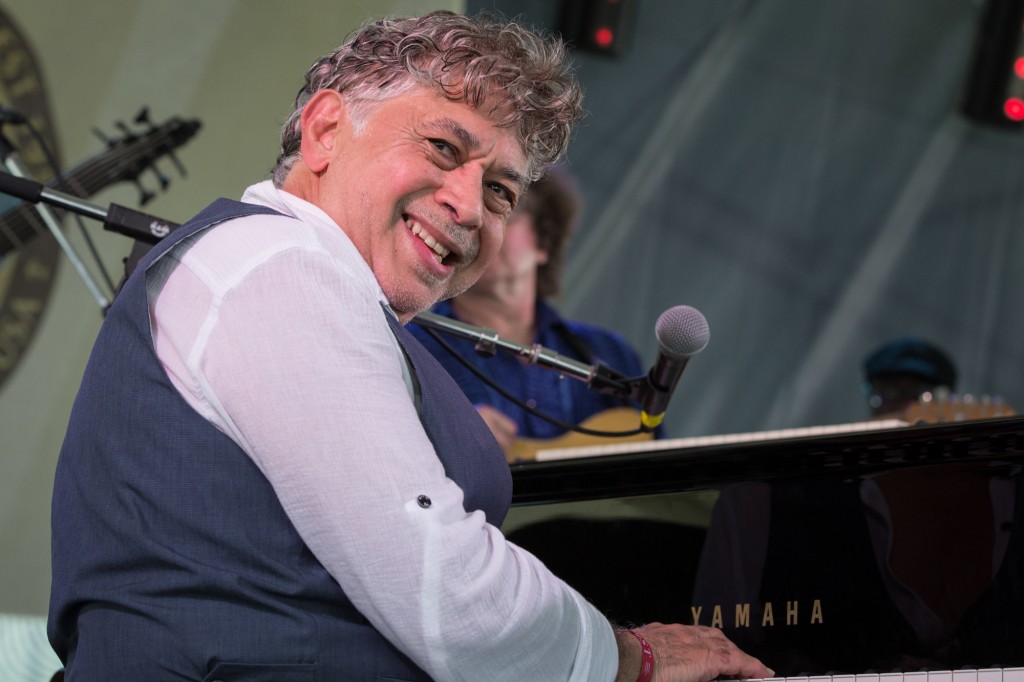 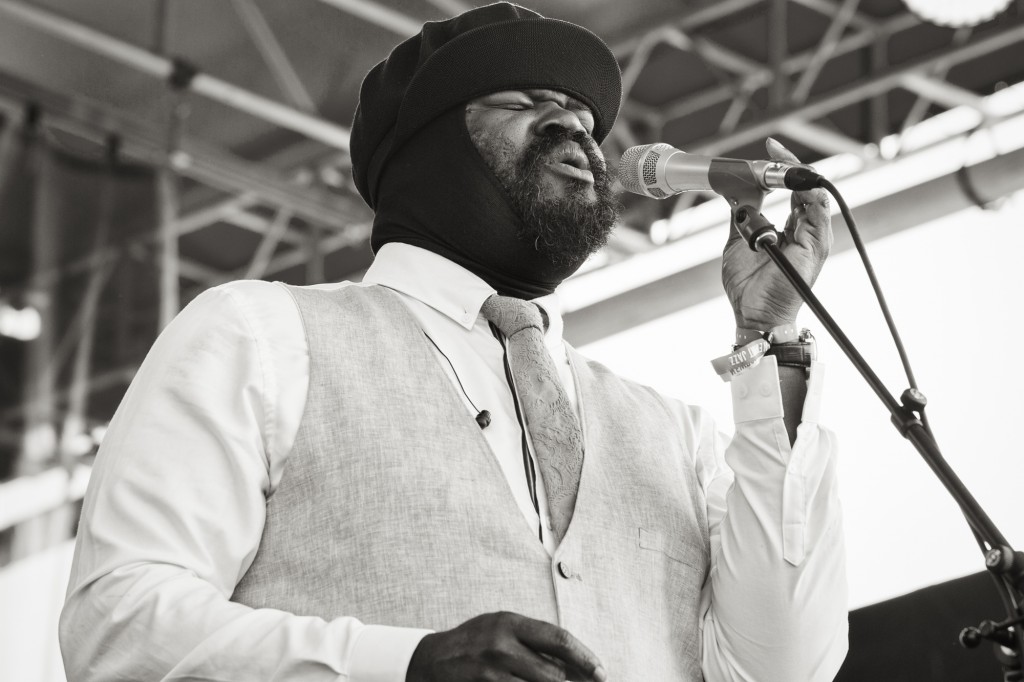 My Sunday got going with bassist Ben Williams & Sound Effect at the Harbor Stage, who debuted the appropriately titled piece for our times “Ballet for the Elephant in the Room”. The Westerlies in the Storyville room were a delightful surprise. Two ‘bones, two trumpets. Four NY guys by way of Seattle who’ve known each other since they were 11. Harmonically interesting original stuff that tickled my ears. So, this day was shaping up nicely even before Kenny Barron and his trio hit the Harbor Stage. Lizz Wright lent elegance and soul to the Carmichael standard “The Nearness of You”, then backed that with a spirited take on Neil Young’s “Old Man”. Charles Lloyd’s New Quartet stretched and pushed under temperate skies at the Fort Stage. The buzz surrounding Kamasi Washington this past year has been unreal. The Los Angeles based saxophonist has been mold breaking since he dropped the 3-disc “The Epic” on the world and hitting every major rock festival from Coachella to Bonnaroo. While not sporting the nearly 20 pieces that shaped The Epic on the smaller Quad Stage, the six pieces (sax, trombone, piano, bass and two drummers) and vocals were positively explosive. A powerhouse ensemble that launched at a high elevation with “Re Run Home” and took off from there. Washington is an important artist with a game changing reach, and yeah, I was pretty floored. Interestingly, his set overlapped with Robert Glasper’s at The Fort Stage, another unrestrained shape shifter with a few Grammys under his belt. Christian Scott wound down the Harbor Stage with his Stretch Music, a set pushed back by some sound issues, and by the time Scott was rolling, Potter, Holland, Loueke and Harland were underway on the Quad Stage. I am a big fan of Holland’s, and have been for some 40 years when I first heard “Gateway” with Holland, John Abercrombie and Jack DeJohnette. There is fleet tension seemingly grounded and in flight, and a sweet spot tone, for which I have great admiration. Holland has been an experimenter over his long career but this quartet is in keeping with a more fusiony sound anchored by his upright, a worthy follow-up to his exceptional work with Prism from a few years back, and Blue Note guitarist Lionel Loueke jumped on a variety of interesting effects from the get go. The day and the festival were winding down and the lighter Sunday crowd already thinning by the time Benenise vocalist Anjelique Kidjo closed the Fort Stage on a buoyant and colorful note. 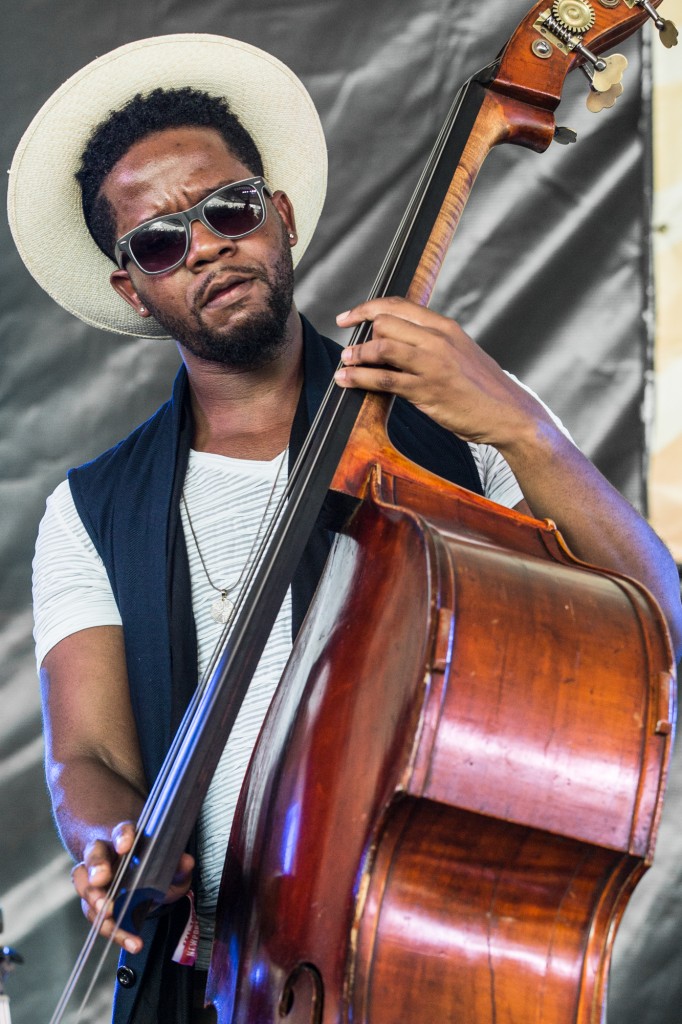 Ear tickling courtesy of The Westerlies 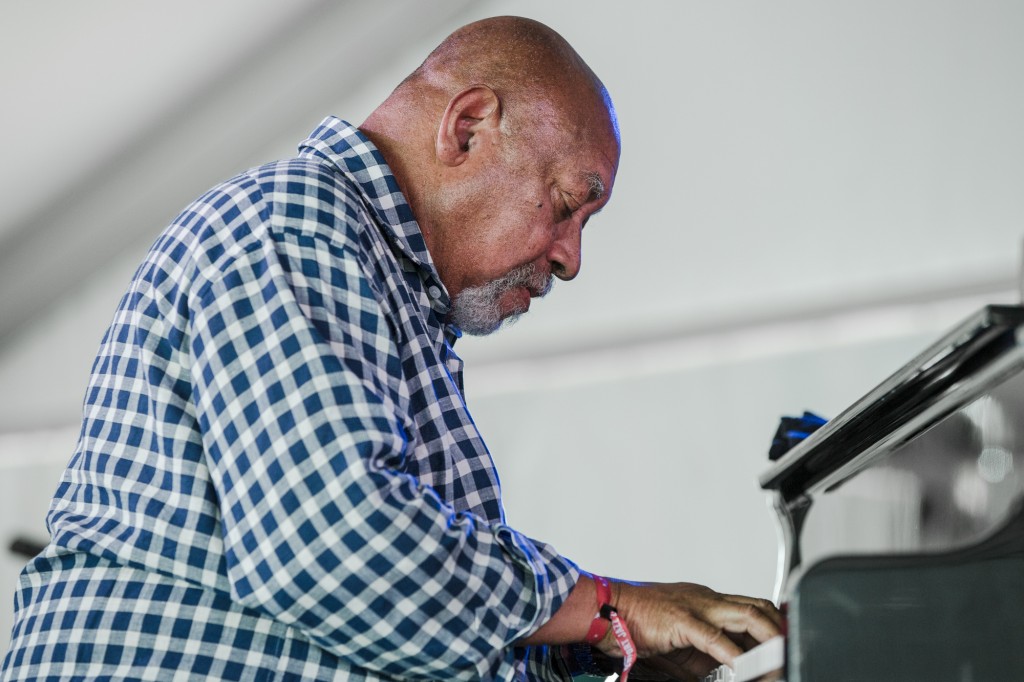 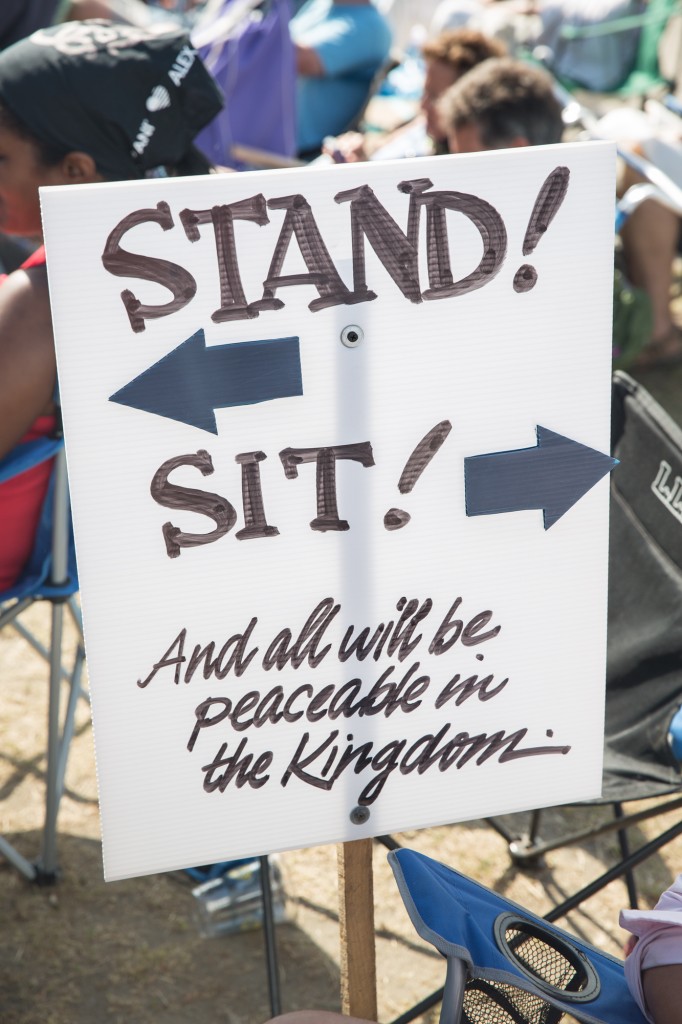 Get close or chill out, plenty of room for all 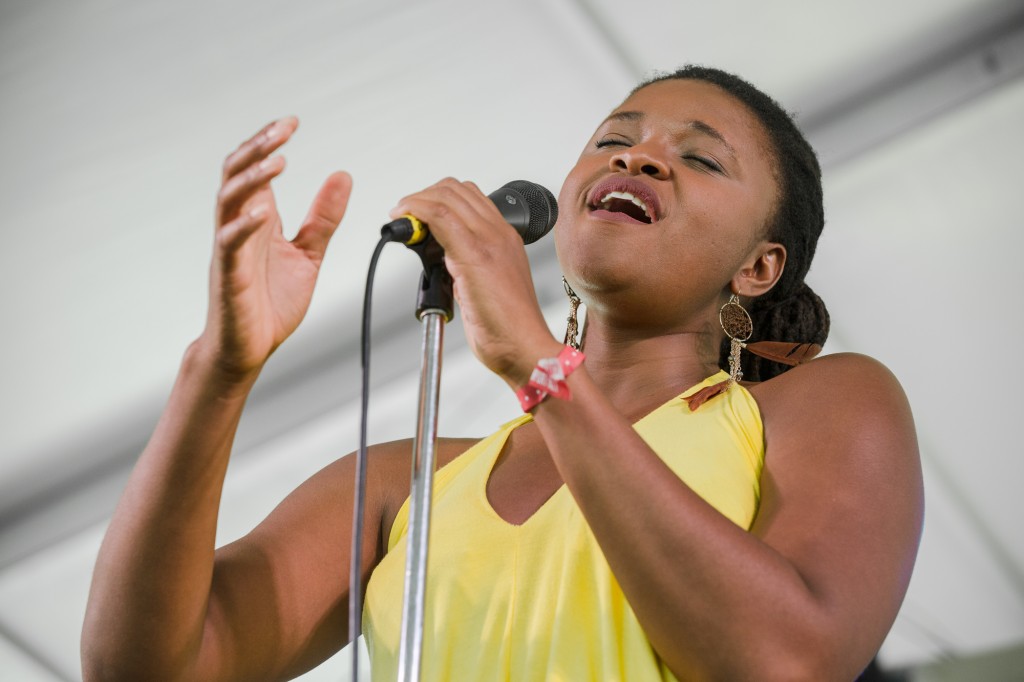 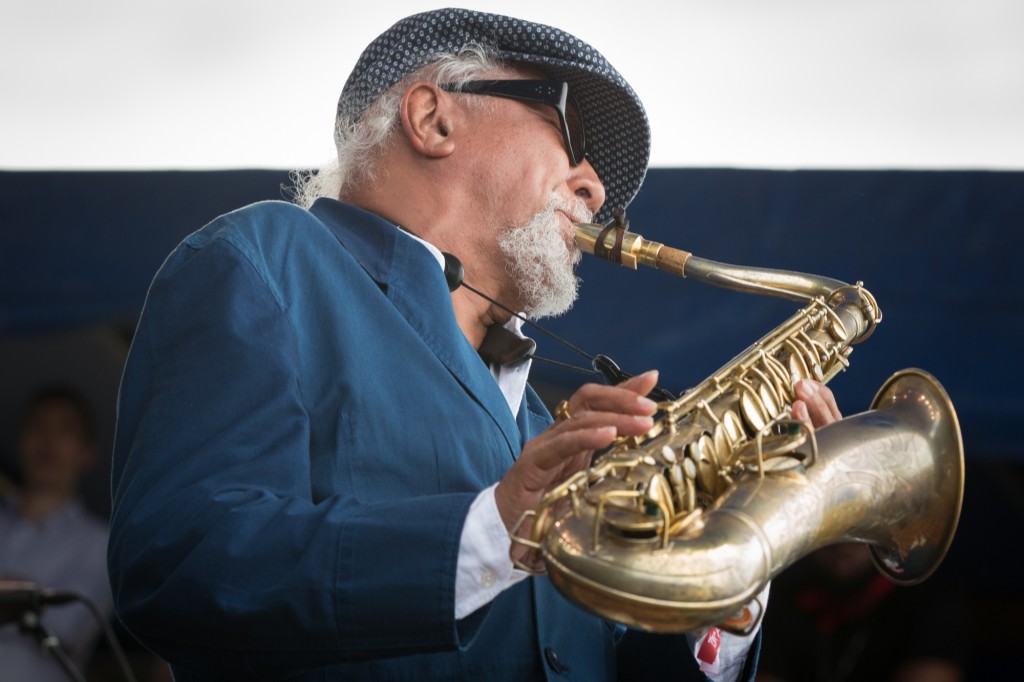 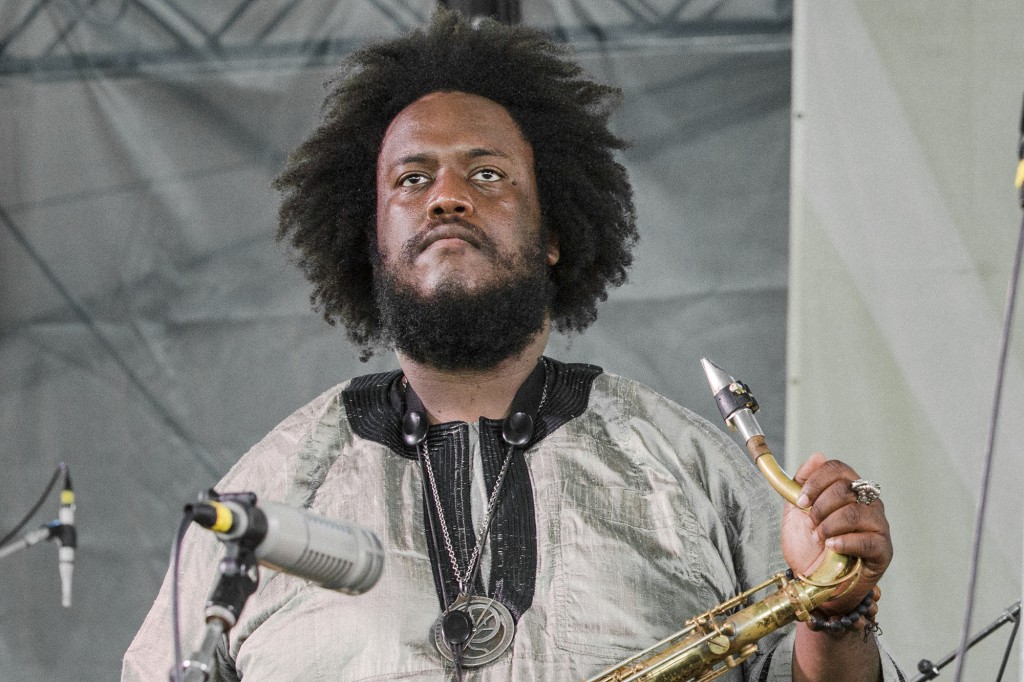 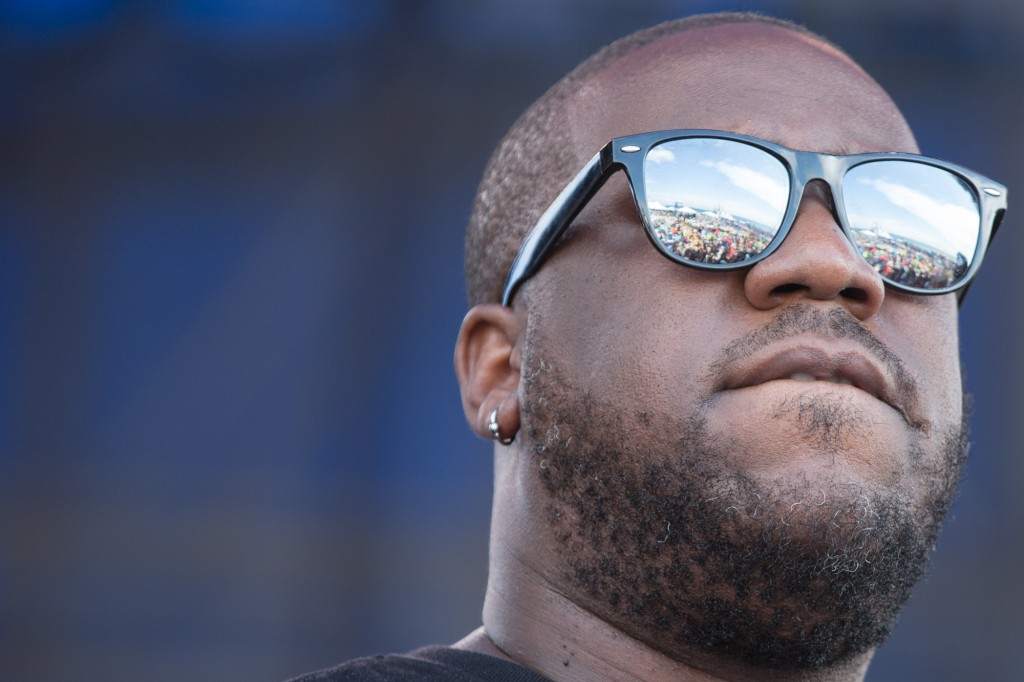 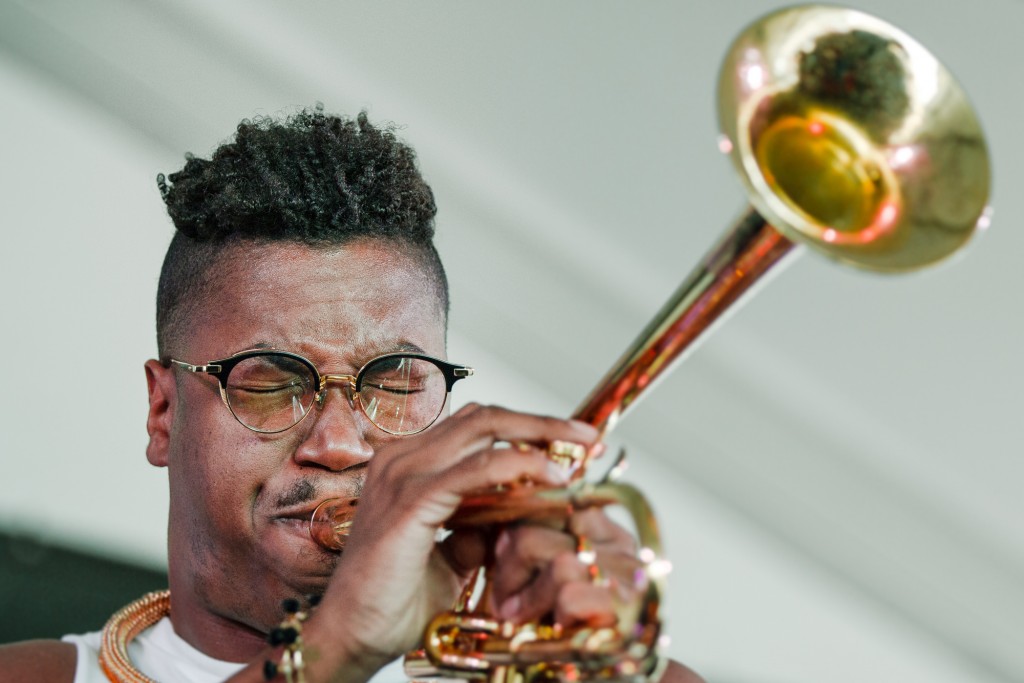 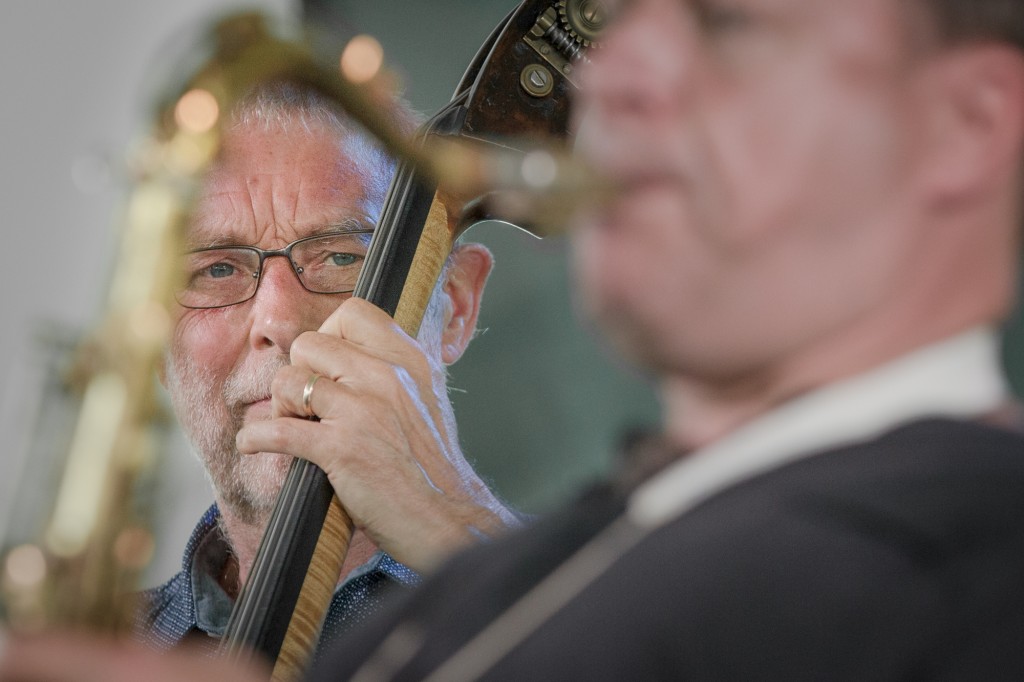 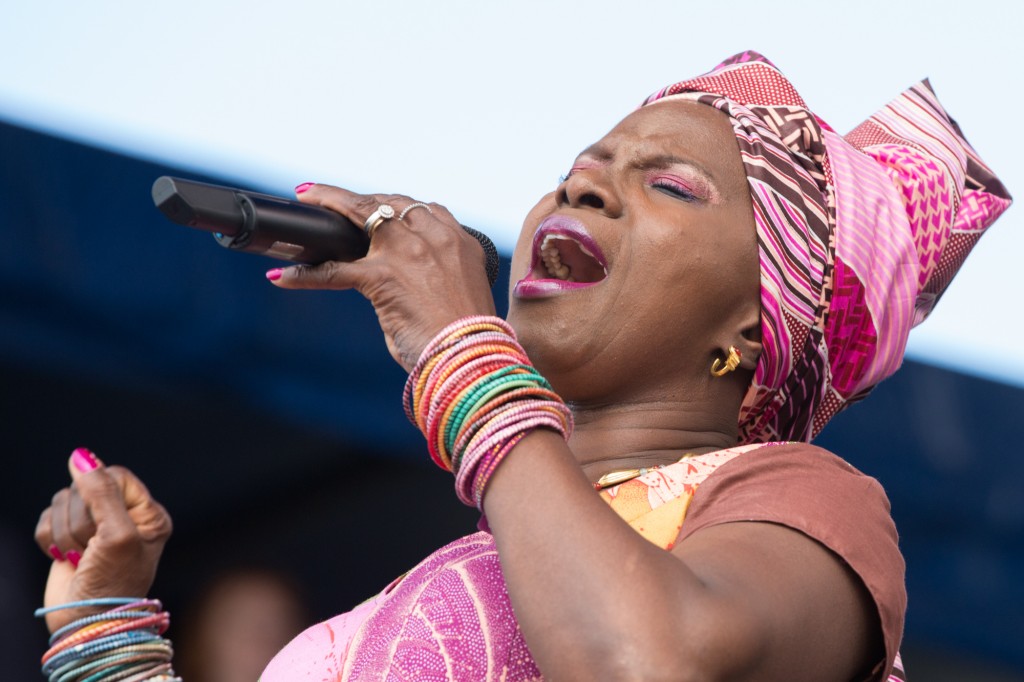 This west coaster bonded with colleagues from Boston and New York and throughout the two days of shooting, the scope of talent we all covered was pretty astonishing. The festival has such a personal scale that brings more attention to the music, drawing us all in to listen and explore in our own way. And, in this Snapchat age of the ever evaporating attention span, that’s never been more important. Thanks and appreciation to the festival staff and team, and to the sponsors who make the Newport Jazz Festival presented by Natixis Global Asset Management the vibrant event that it is. Most importantly, George Wein, God bless ya! 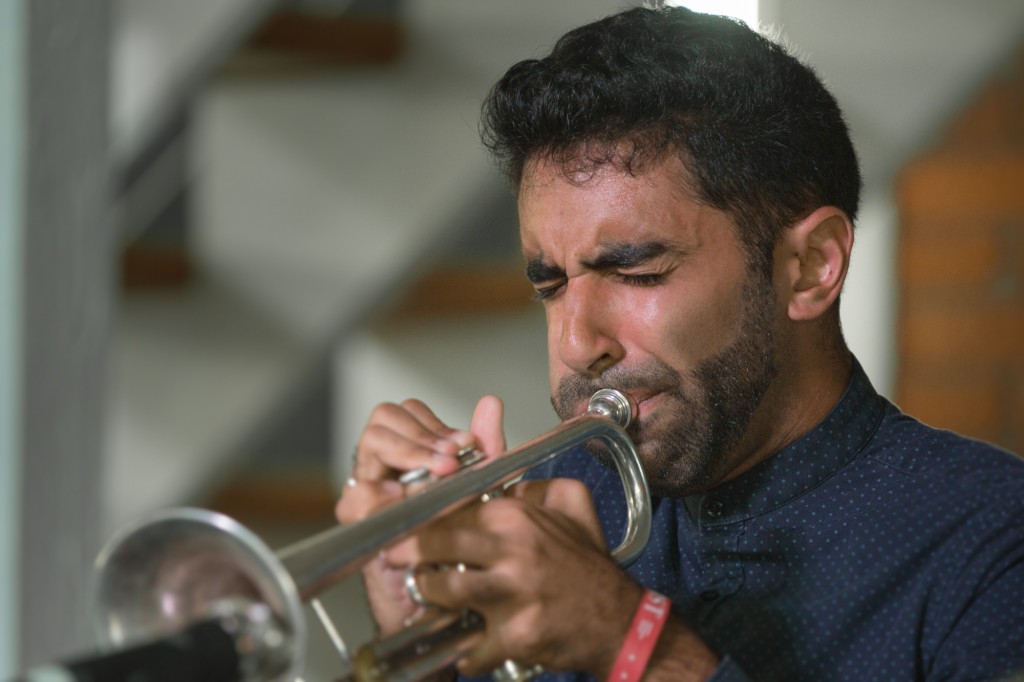 The sounds of Newport Jazz 2016

Jubilee: A Celebration of Jerry Garcia, Theatre at Ace Hotel