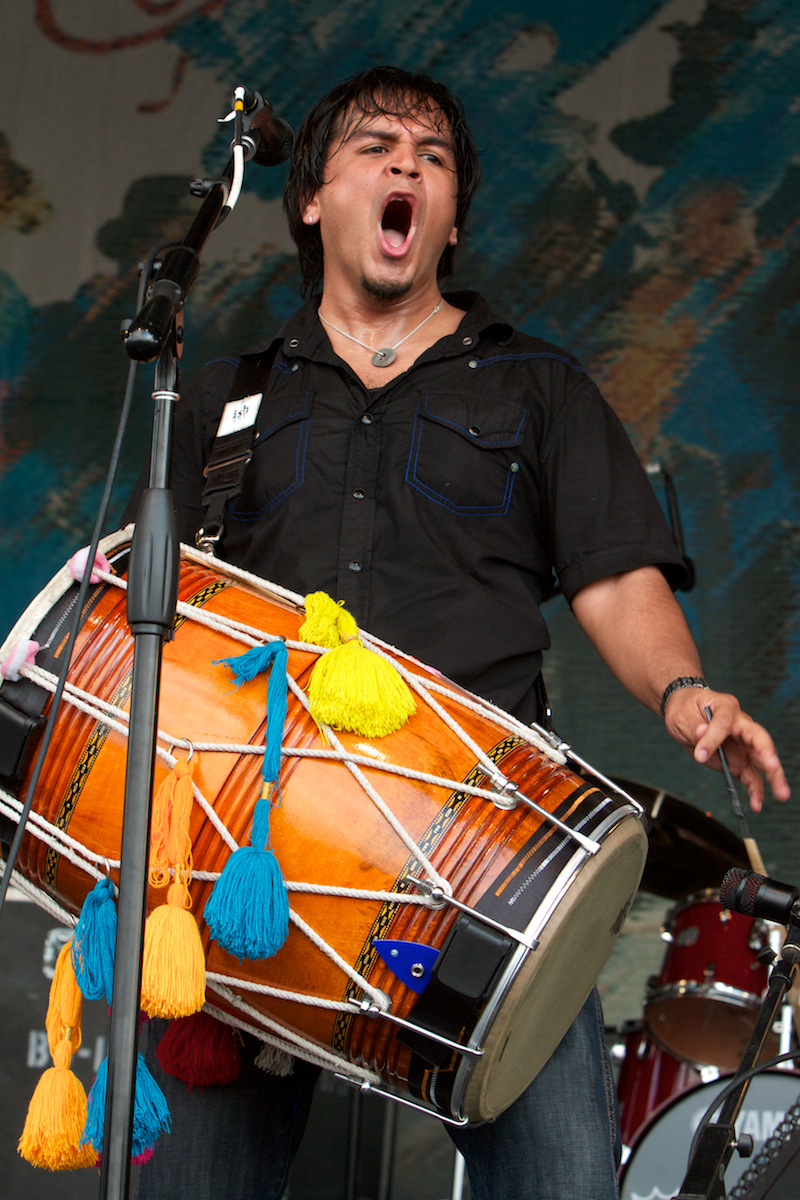 The cultural reach of New Orleans music makes for a different kind of eclectic. Blender eclectic. Not every combination hits the sweet spot but the willingness to try anything out mirrors New Orleans resilience, roots and diversity to a tee. Where else could native Swedes Anders Osborne and Theresa Andersonn plant themselves and flourish like native Orleaneans. Or birth the New Orleans Klezmer All-Stars with their devoted legion of revelers to what can only be described as ethnically steeped music that approaches jam rock peaks, while remaining firmly grounded in both their New Orleans roots and Yiddish melodies. You couldn’t make this stuff up.

The latest in this jambalaya tradition of mixing cultures and sounds to catch my ear is Red Baraat (Baraat is the Hindi word for wedding procession). Self described as a “Brooklyn dhol n’ brass band”. The Village Voice dubbed them “raucous Indian bhangra and funky New Orleans brass”. My best shot to the uninitiated is NOLA brass’n’drums strained through hot curry. The adjectives fly hard and fast with these guys, and for good reason.  Perhaps the band’s web bio says it best “… led by dhol player, Sunny Jain, the nine piece comprised of dhol (double-sided barrel shaped North Indian drum slung over one shoulder) drumset, percussion, sousaphone and five horns, melds the infectious North Indian rhythm Bhangra with a host of sounds, namely funk, go-go, latin, and jazz. Simply put, Sunny Jain and Red Baraat have created and deﬁned a sound entirely their own.” Yikes (and couldn’t agree more)!

So, I caught Red Baraat at the Jazz and Heritage Stage at last year’s Jazzfest upon hearing they “killed it in Lafayette” the day before and were not to be missed. Heck, they had me at traditional Hindi drums and trumpets, but “killed it in Lafayette” put me over the top. Throw them in front of a Jazz and Heritage crowd towards the end of the first Sunday and I was there, even if as much out of curiosity as musical expectation.

I’ve been anticipating how my Red Baraat experience would translate from the Louisiana sun to the living room intimacy of The Mint, ever since the show was announced in mid-January. With one studio album to their credit (2010’s Chaal Baby) an imminent follow-up (Shruggy Ji) and a live album (Bootleg Bhangra) from their Brooklyn turf, Red Baraat has plenty of material to draw from. This is a band I am getting to know by feel and infectious spirit, not a set list.

As the 10 PM start time pushed closer to 10:30, the crowd filled in and not your usual Saturday night Westside mashup for a change. This was the first real West Coast swing for the band with dates in Santa Cruz and San Francisco before their Mint gig. 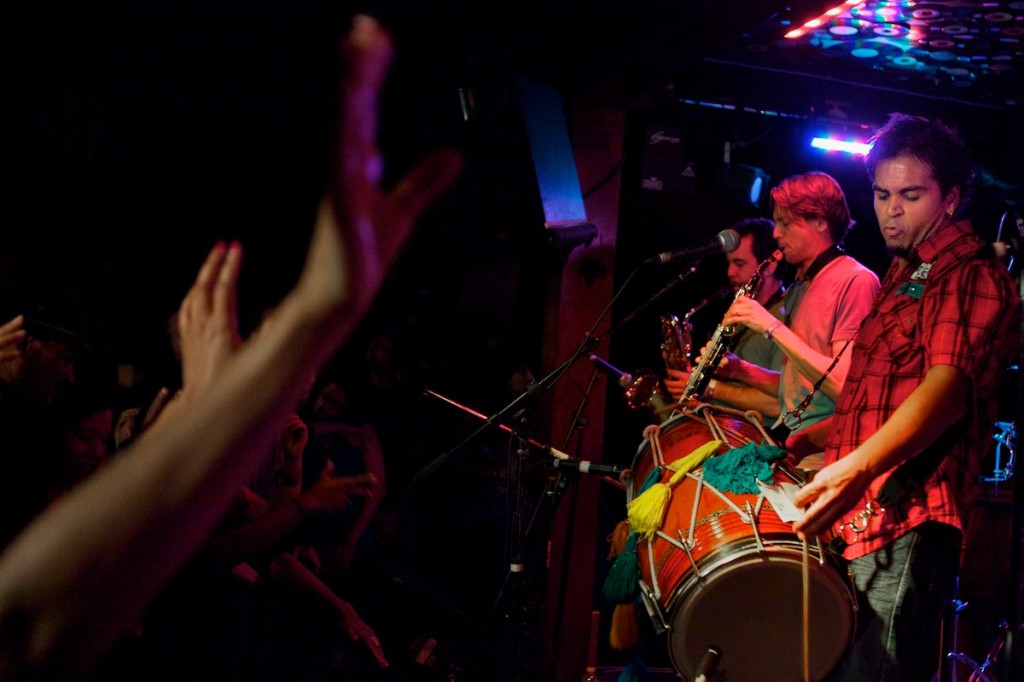 Sunny Jain stood center stage flanked by reeds on his right, brass on his left and percussion behind him. From the get go, the room was filled with swirling brass and horns fed by blazing eastern rhythms and a sousaphone anchor. Yeah, it made perfect sense. “Chaal Baby” from their debut of the same name jumped straight into a deep percussive groove mixing Tomas Fujiwara’s traps, Jain’s dhol and Rohin Khameni’s percussion that had everyone’s hands up and feet moving. “Baraat to Nowhere”, also from Chaal Baby, was chunky enough to bring sousaphonist John Alteiri to the front to blow and rap (both part of his job description, according to his band bio). The fast and furious “Tunak Tunak Tun”, from Chaal Baby, featured some dazzling soprano turns by Alex Hamlin. At the end of the tune, the vibe of the crowd was nicely expressed by a distinct “fuck, yeah!” from the floor. “Shruggy Ji”, from the soon to drop second album of the same name, started with a brief dirge-like decoy, then kicked into a brass driven bluesy swing that wouldn’t be out of place at a second line funeral. The set closed with “Private Dancers” featuring the brass section of Sonny Singh (trumpet), MiWi La Lupa (bass trumpet) and Ernest Stuart (trombone) in high gear. The rap infused piece showcased Mike Bromwell’s baritone growling at just the right bandwidth (as he did all night) with Sonny Singh putting his jazz chops on full display (more impressive as he was somewhat under the weather).  The encore capped the nine-song set with more dexterous soprano work by Alex Hamlin. 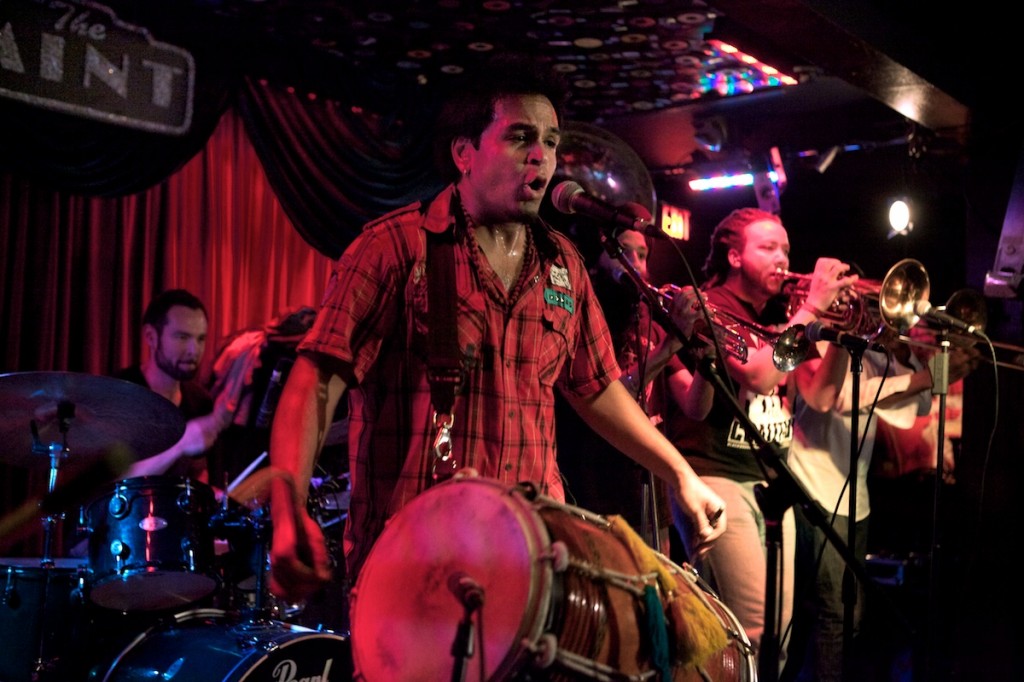 Time changes were rare – rather, Red Baraat swung and stayed with their beats from the beginning with start/stop tension gratifying enough to bust out a smoke and ask for their number. Sunny Jain was the perfect host for this affair, the complexion of his dhol adding rhythmic texture and pulse not traditionally found in a brass heavy context, yet echoing a marching band’s snare in other moments.  His energizer spirit was uncontainable throughout, both band and audience in perpetual celebration. 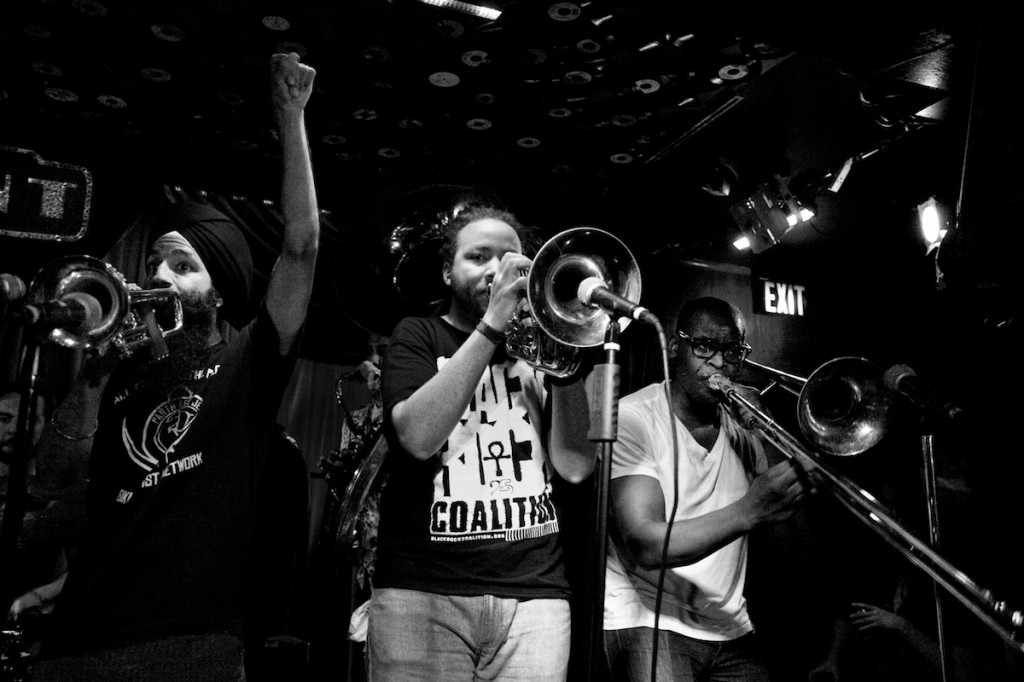 A band like Red Baraat shows us that music is truly a world party and that borders are overrated. Who’d a thunk? This is a buzz in the best sense of the word. Live from planet earth, not to be missed. 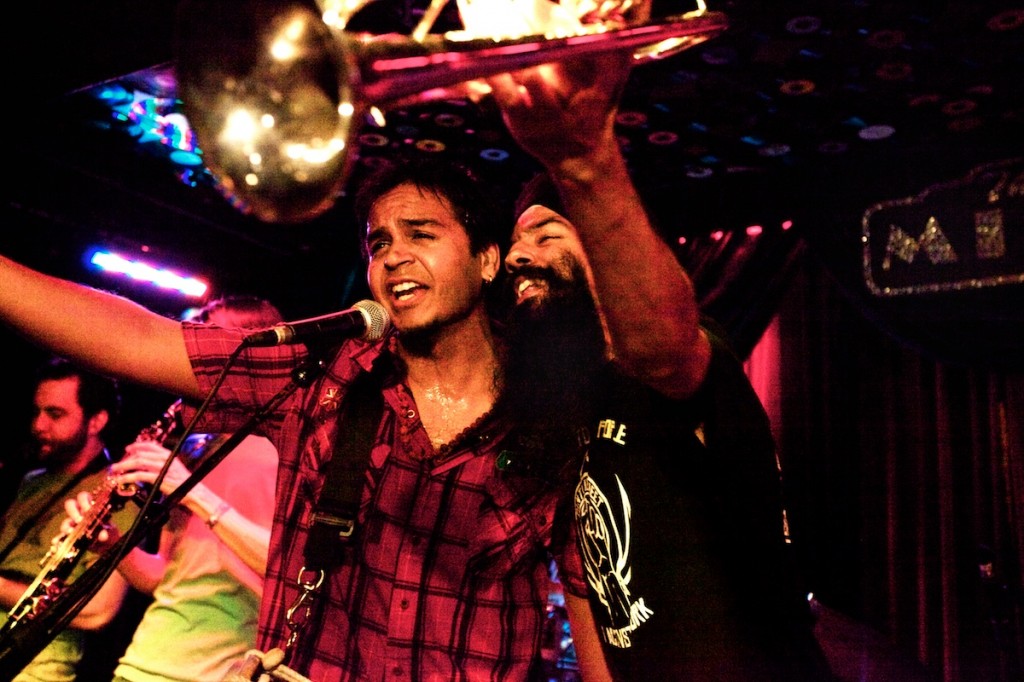 Dumpstaphunk, The Mint
Scroll to top