Hearing the news of Austin Peralta’s passing, at just 22, is beyond incomprehensible. At 13, Peralta had already established himself as a jazz pianist bearing the burden of comparisons to giants like McCoy Tyner. At 15, he was playing alongside giants like Ron Carter. This kid, from West Los Angeles, this progeny of a surfer-skate legacy, was off the charts fucking unbelievable. I first heard him at my cousin’s urging in 2008 (he went to high school with his daughter). I couldn’t believe what I was listening to. His cover of Tyner’s “Passion Dance” didn’t just honor the composition, it elevated it. Like that was even possible. I saw Peralta live only once. Playing to a room of 30 or so mostly friends and family at the old Jazz Bakery on a weeknight. That the world did not know this guy was beyond me. He had been a fixture in town, playing fairly often at the Blue Whale and other rooms. I did not know Austin or his family personally, but knew friends and players in his orbit and I’m probably older than the sum of most of his early trios. That he even existed in this sphere was musical proof of something bigger than us, and his loss evidence of our constant temporality. I kick myself for not getting out to more shows, to spreading the word of his amazing talent. While I didn’t follow Peralta’s work into electronica and his Flying Lotus collaboration (others can better speak to that), what I caught was a guy still a kid on the outside, mouth agape, eyes wide and joy spread all over his face as he intersected with other incredibly talented players. His right hand flying so high and hard it was borderline untethered and totally exciting. His playing danced. Words are really hollow here. We will never know what Austin could have been, where he would have gone next, how more years would shape him.  His passing is a reminder, an urgent one, to embrace jazz, nurture and support young talent and revel in music and artistic expression of all kinds. My heart goes out to the Peralta family, to his friends and fellow musicians reeling from his passing. 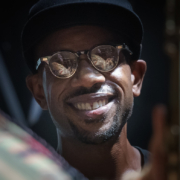