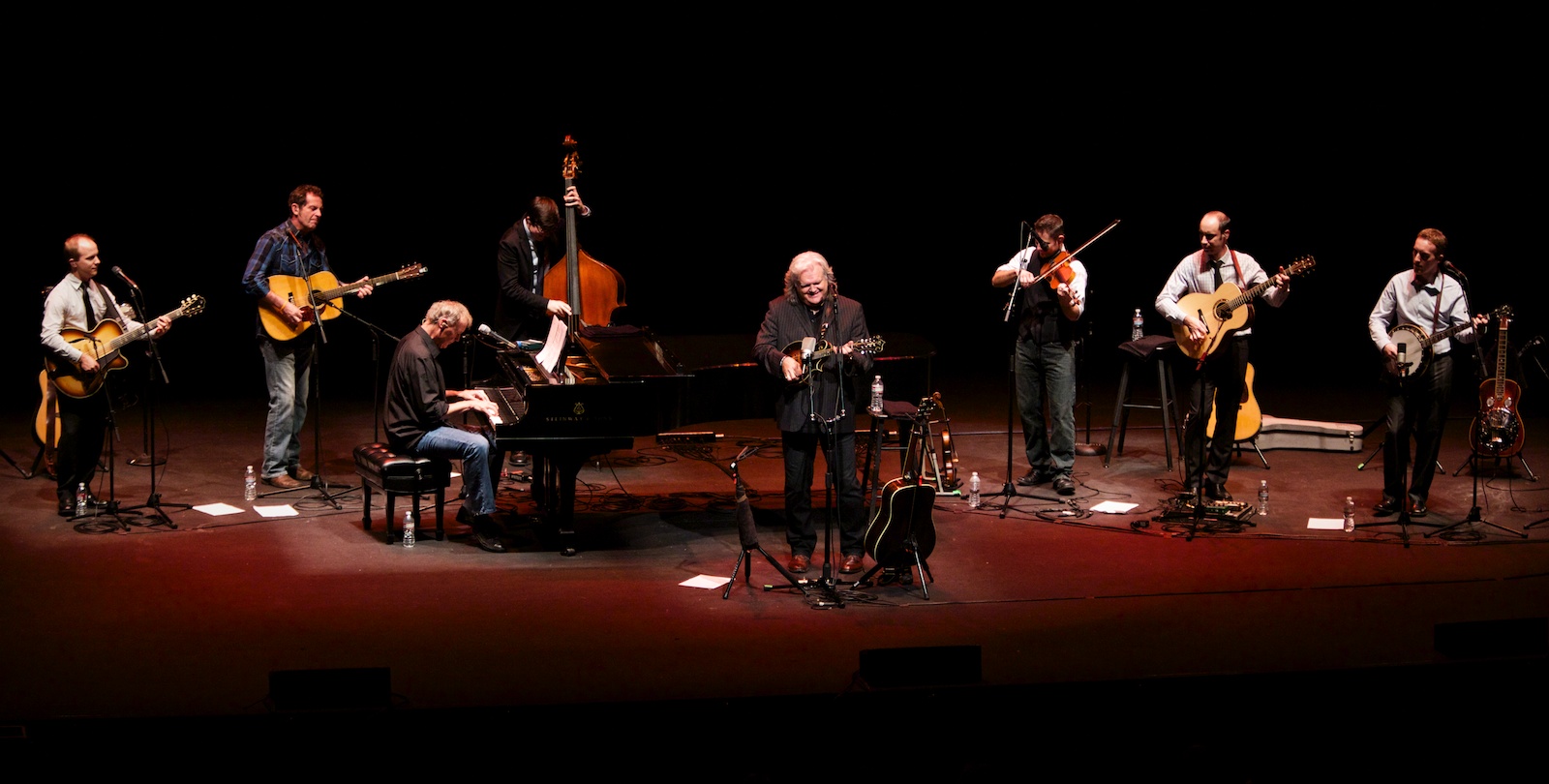 Bluegrass is a lot of things. The high lonesome. Bill Monroe. Furious pickin’. Lots of strings. Acoustic instrumentation.  What it traditionally isn’t is plugged in, horns, a drum kit, and rarely, a piano front and center with all those frets. The Ricky Skaggs & Kentucky Thunder with Bruce Hornsby performance at Royce Hall took the latter to heart and showed that keys and strings can indeed be natural companions. Touring on the just released live “Cluck Ol’ Hen” recorded during a previous tour when the two first got together, the show oftentimes felt like a primer in Monroe and all things old school. Heck, just listening to Ricky Skaggs and Bruce Hornsby reflect on their collective musical lives was its own show. Skaggs is a master not just of the instrument(s), but as a guardian of the music itself. Pretty much what you’d expect from a guy who first shared the stage with Bill Monroe as a tyke. 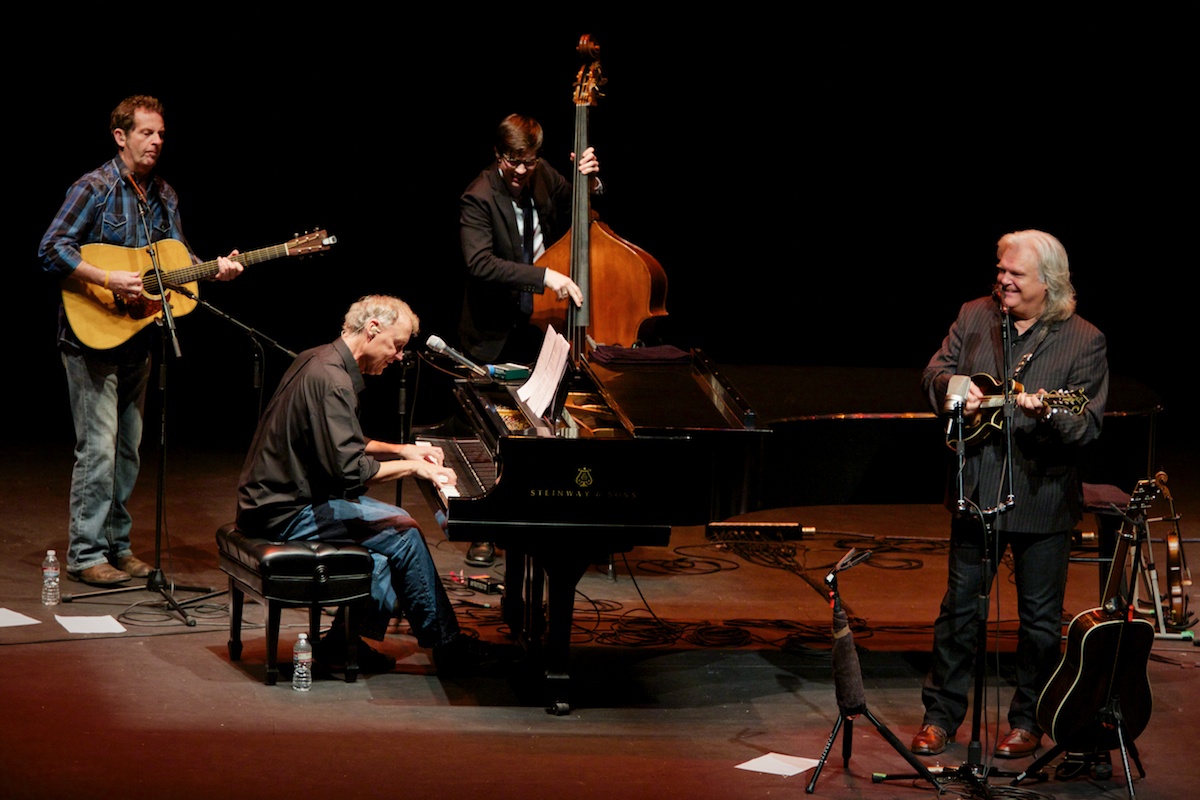 88 keys and a lot of strings meant for each other 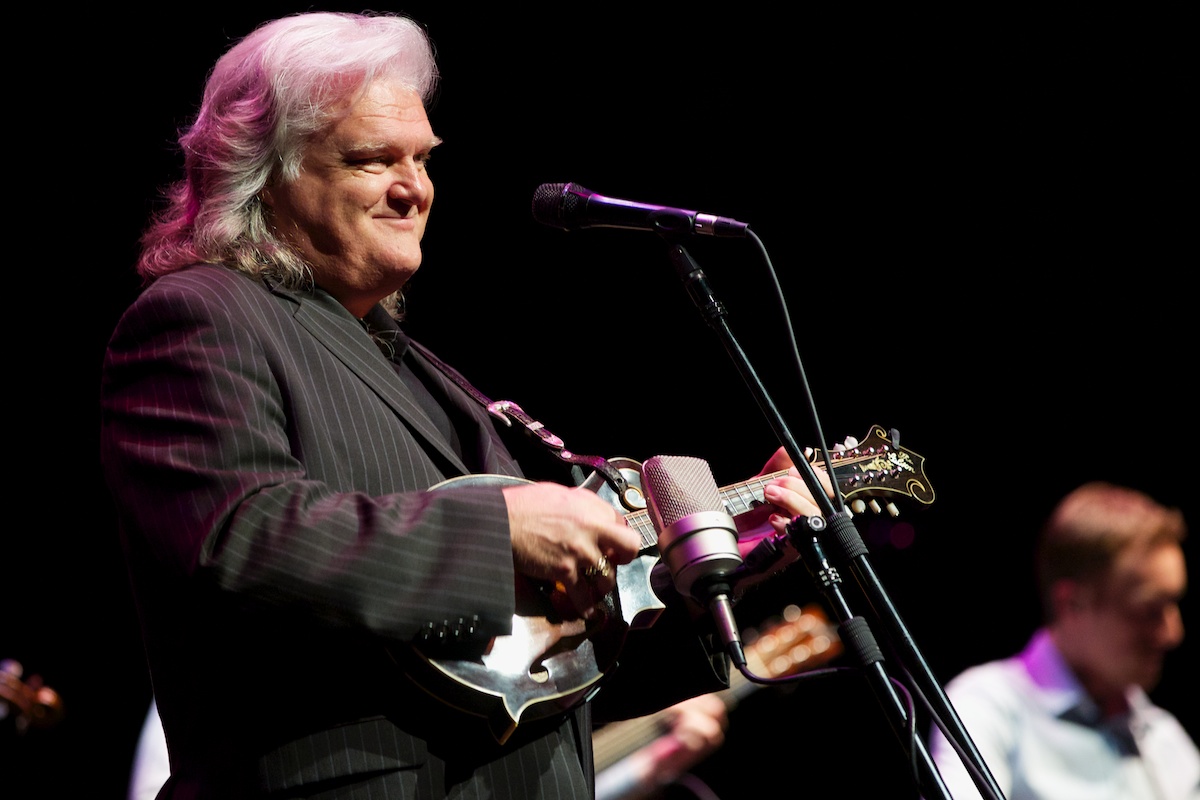 Bluegrass is feel good music, especially in the hands of Ricky Skaggs

My bluegrass knowledge is not deep, but my appreciation is and runs through the likes of Del McCoury, Tony Rice, Norman Blake and many others. I am, however, an unabashed Hornsby fan and the pairing did them proud. Hornsby’s fingers flew with a flatpicker’s speed, seamlessly blending with a multitude of frets. Bill Monroe staples such as “Toy Heart”, “Bluegrass Breakdown”,  “Blue Night” and “Sally Jo” sat comfortably alongside Skaggs originals such as “Stubb” or the Hornsby classic “The Way It Is” (which found Skaggs taking the vocals in a nice twist). 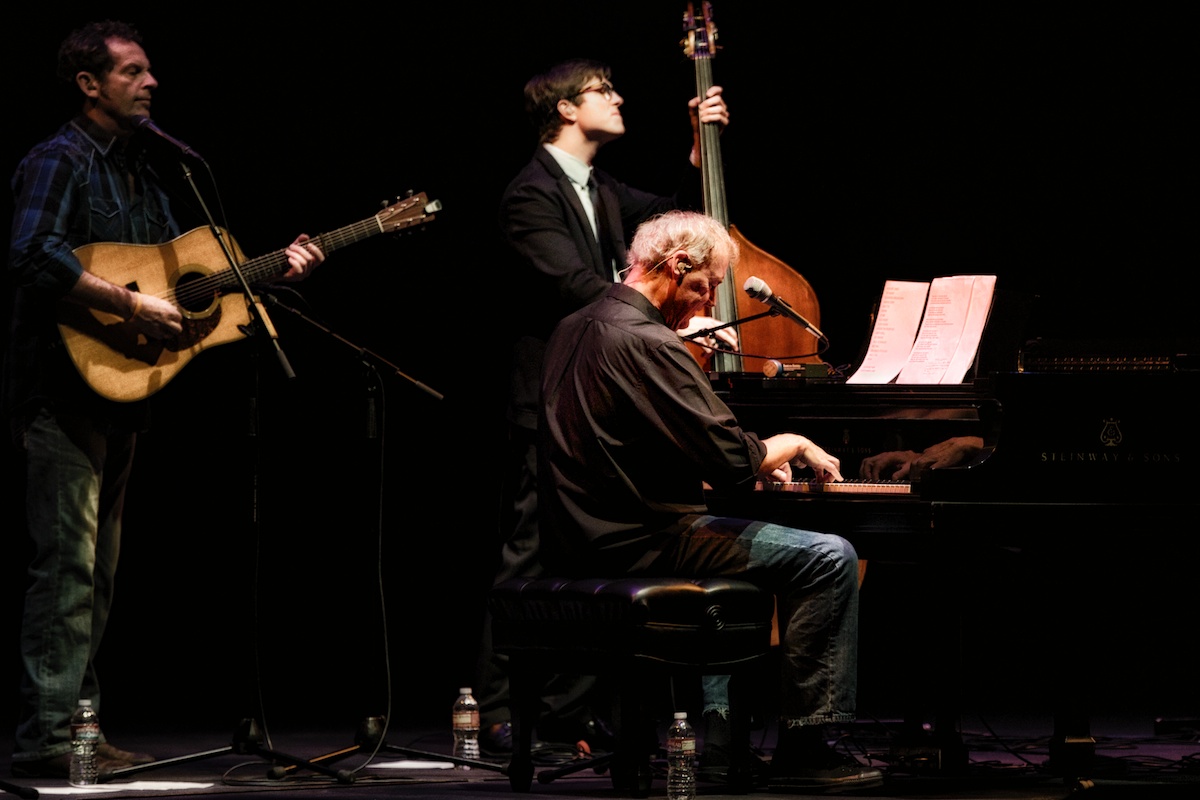 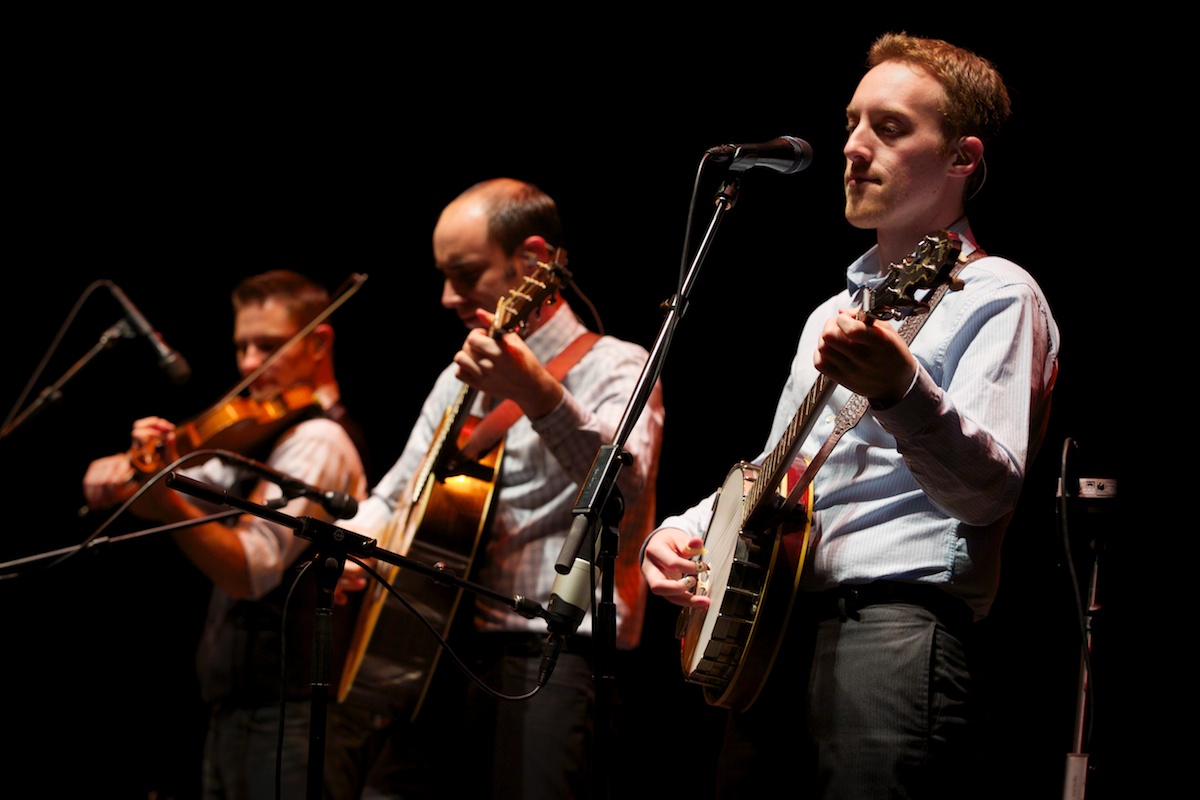 Jimmy Martin’s “20/20 Vision” (“and walking ‘round blind”) got the double interpretive treatment, as Hornsby described how LA jazz bassist Charlie Haden put his own spin on it and that Kentucky Thunder bassist, Scott Mulvahil, would go one better, and put his spin on that (no pressure, Scott). Mulvahil’s solo intro had a beautiful sturdy tone closely shadowed by Hornsby’s vocals and Andy Leftwich’s appropriately mournful fiddle and Justin Moses’ dobro. The tune was spare and gorgeous. Later in the set, Hornsby invited the courageous to get their clogs on for the traditional “Sheep Shell Corn”, which drew an impressive audience contingent to the stage. That little Westwood hoedown even transformed stately Royce Hall into a barn for a few minutes. 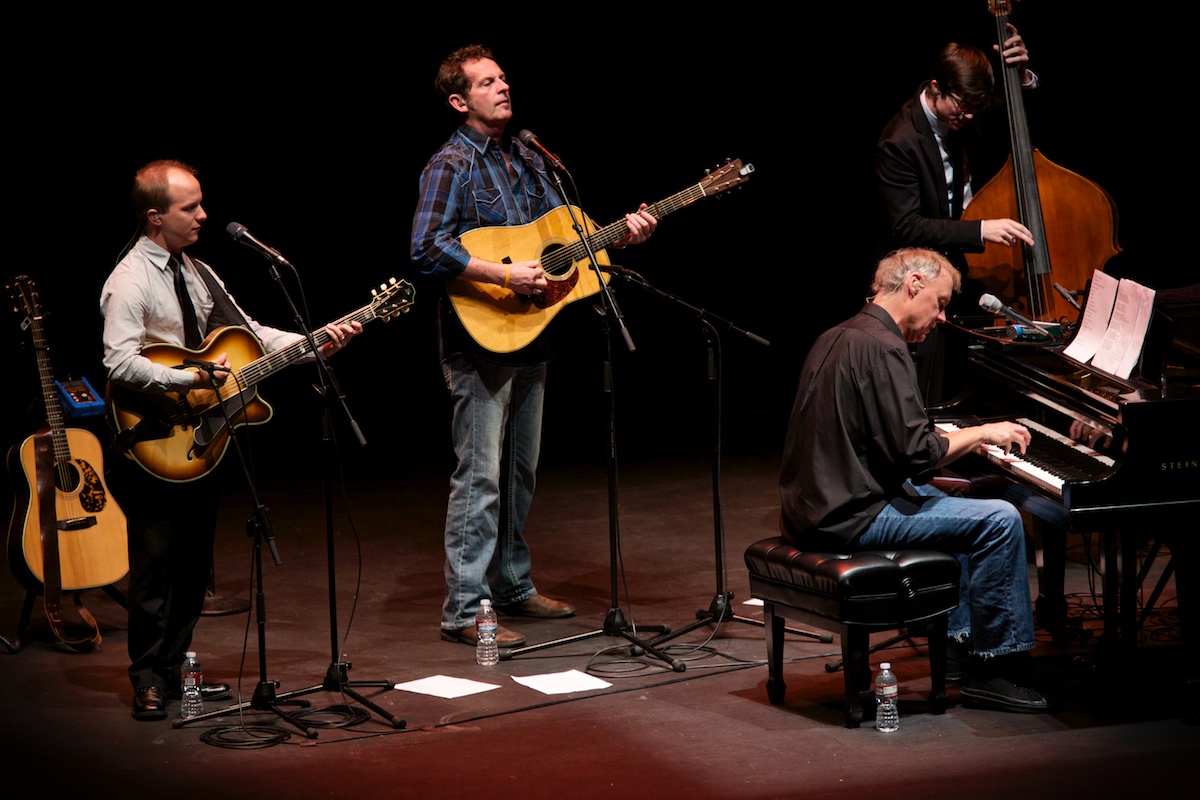 Now, if you are playing with Kentucky Thunder accompanying Ricky Skaggs, you have to be pretty good at what you do. The musicianship on stage was superlative, especially Cody Kilby’s flatpicking, which was just crazy good. There ain’t no where to hide as a flatpicker and Kilby grabbed ahold of every note. Kudos to all the strings, including Kilby on guitar, Leftwich on fiddle, Mulvahil on bass, Moses on banjo and dobro, and Paul Brewster and Eddie Faris on other guitars (and vocals). These guys are the very best. 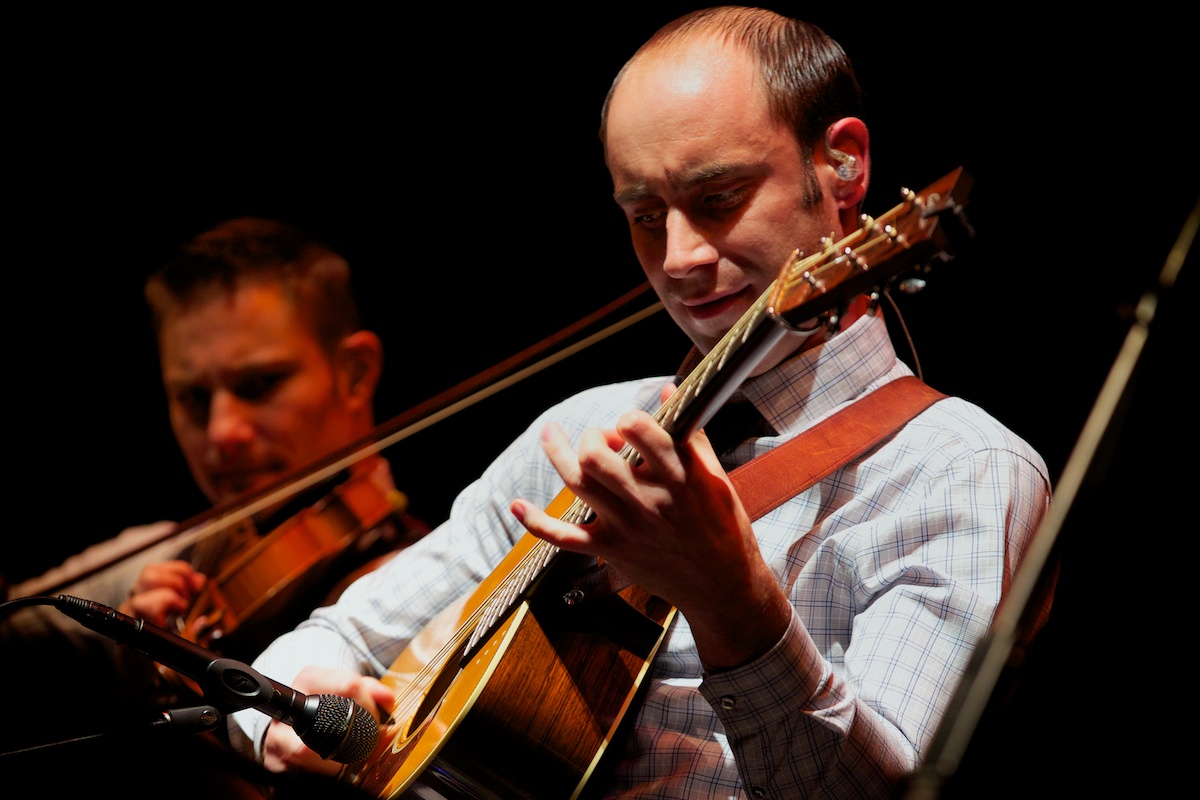 Off the charts picking from Cody Kilby

The set closed on a deliciously twisted and feverishly delivered cover of Rick James’ “Super Freak” (or in Skaggs parlance, “she’s super freaky!”). Not Bill Monroe, but not so far afield after the dust settled on this baby. Really. Thunder & Hornsby came back with the traditional “Cluck Ol’ Hen” of the live album’s title and Hornsby’s “White Wheeled Limousine”. Hornsby took his piano to almost classical places, pushed along by Skaggs’ mandolin, Leftwich’s fiddle and solo passages from many that underscored the left at the altar heartbreak of the song, while returning to the freewheeling ‘grass-centric theme – a perfect fit for this unit. Then, Hornsby pivoted into the George Jones classic “Just One More” that turned honkytonk ache into bottom of the bottle tenderness. I was practically bawling by the time it was through. Nice job.

Super Freaky, clogs and The Way It Is, who knew?

The confluence of traditional Skaggs bluegrass with more modern Hornsby elements is a beauty. This is vibrant, alive, real time music steeped in the present while proudly honoring the past. So, if this is old school, sign me up. I’m almost ready to slap some clogs on. 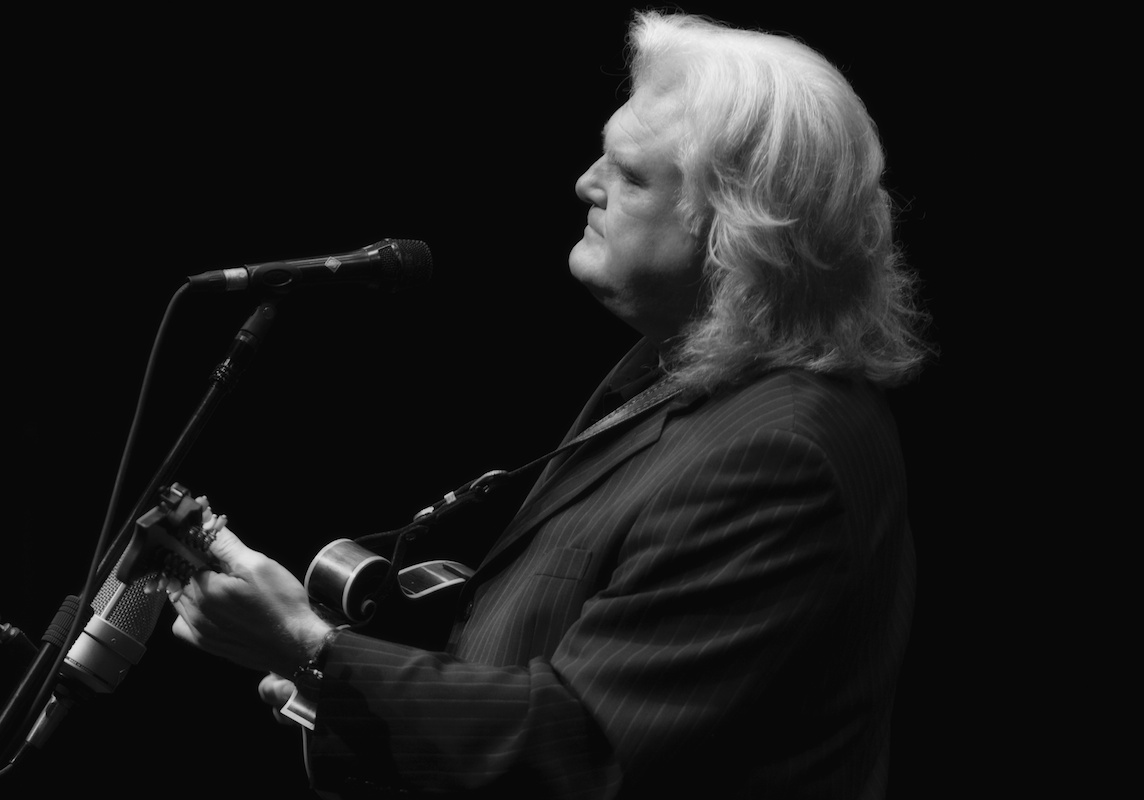 Ricky Skaggs, bluegrass for the ages