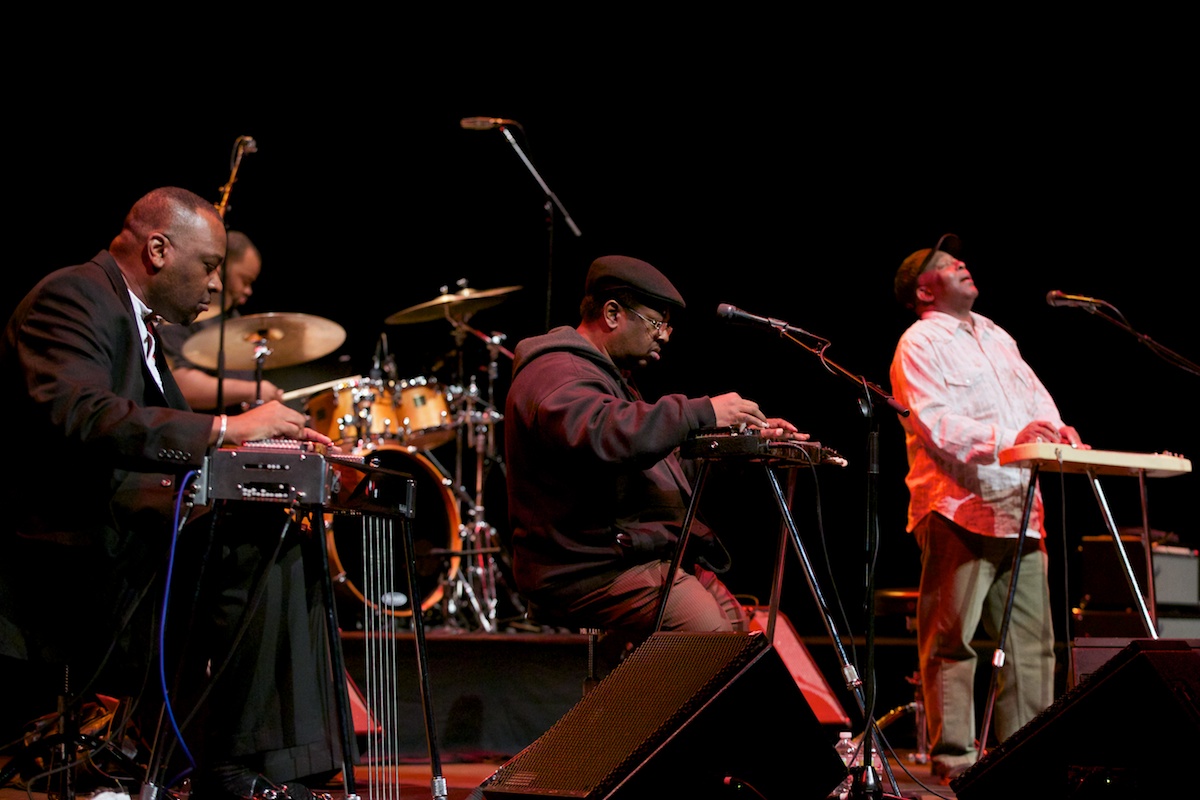 We’re all told to respect our elders, to learn from the generation before and to pass along tradition. Wise words musically speaking, and fundamental to any jazz or blues playbook where family legacies span generations and old sounds are regularly rediscovered and reimagined.

Now, I hail from about as far from a Pentecostal upbringing as one would expect for a ‘60s kid raised in the relative comfort of a West Los Angeles lifestyle. But when I heard Robert Randolph for the first time, I was floored. I had no clue about the roots of Sacred Steel in the church tradition, but the Hendrix like intensity he brought to the pedal steel was pretty religious in my book and I’ve been a fan ever since.

Randolph’s latest project, the Slide Brothers, pays homage to those roots. Randolph has brought together the “greatest living musicians who embody the Sacred Steel tradition” (as described on the Slide Brothers’ web site), a tradition that dates to Depression era times where steel/slide guitar and vocal melodies were all but interchangeable in church music. Calvin Cooke, Chuck Campbell, Darick Campbell and Aubrey Ghent are the Slide Brothers – a direct legacy to a musical tradition rarely heard beyond church walls. Randolph, himself a son of a deacon and a minister, saw to it that the world gets to hear these guys with the release of the self-titled debut studio album and this current tour (with dates in California and Nevada). I hadn’t heard any of the album before the show, but the mix of material from the Allman Brothers and George Harrison to more traditional spirituals sounded awfully good to me.

The Slide Brothers (with Carlton Campbell on drums and Randolph regular Ray Holloman on bass, but without Darick Campbell) got into position with the pedal steels of Randolph and Chuck Campbell bookending Calvin Cooke and Aubrey Ghent, who played their lap steels on stands (Cooke plays the same instrument his mother bought for him to this day). That’s a whole lot of strings on stage and anticipation of their confluence was obvious. Not something you are going to hear or see, well, err, almost ever. 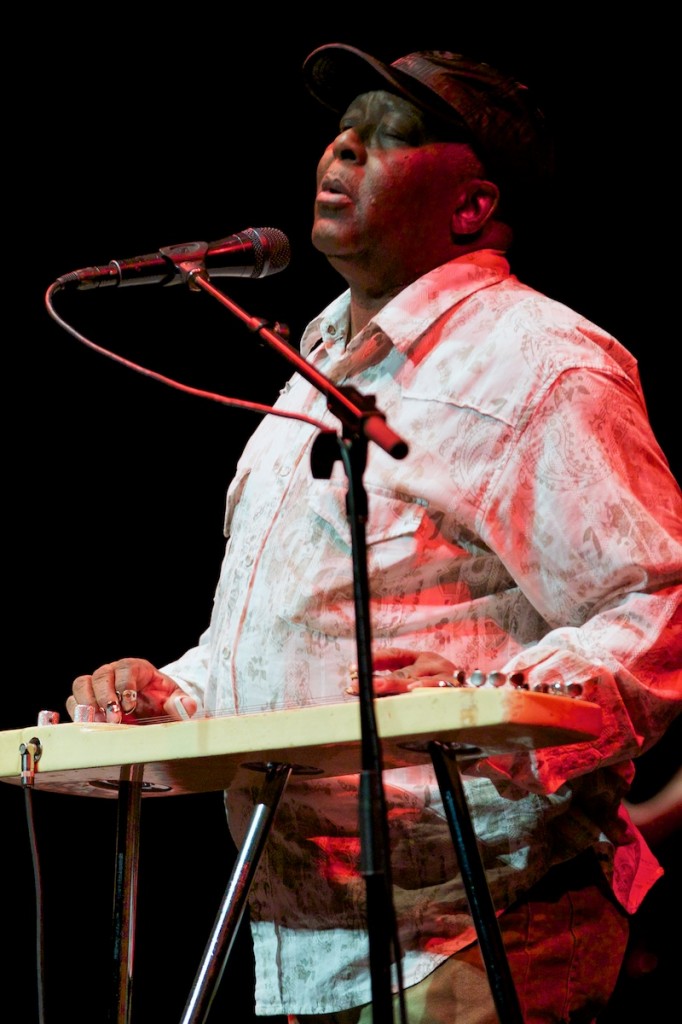 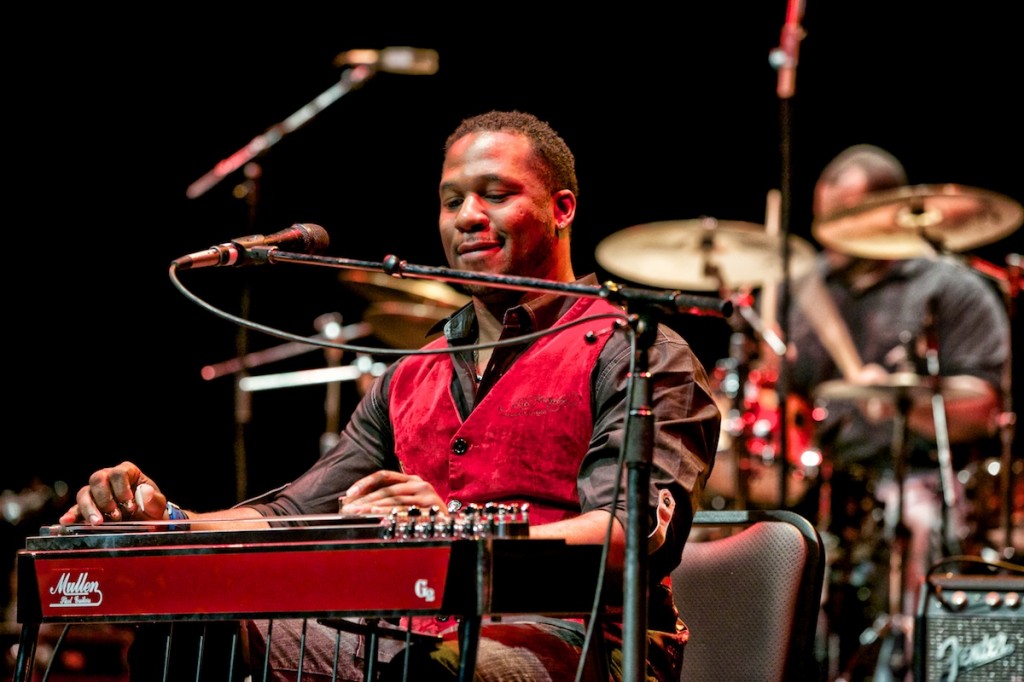 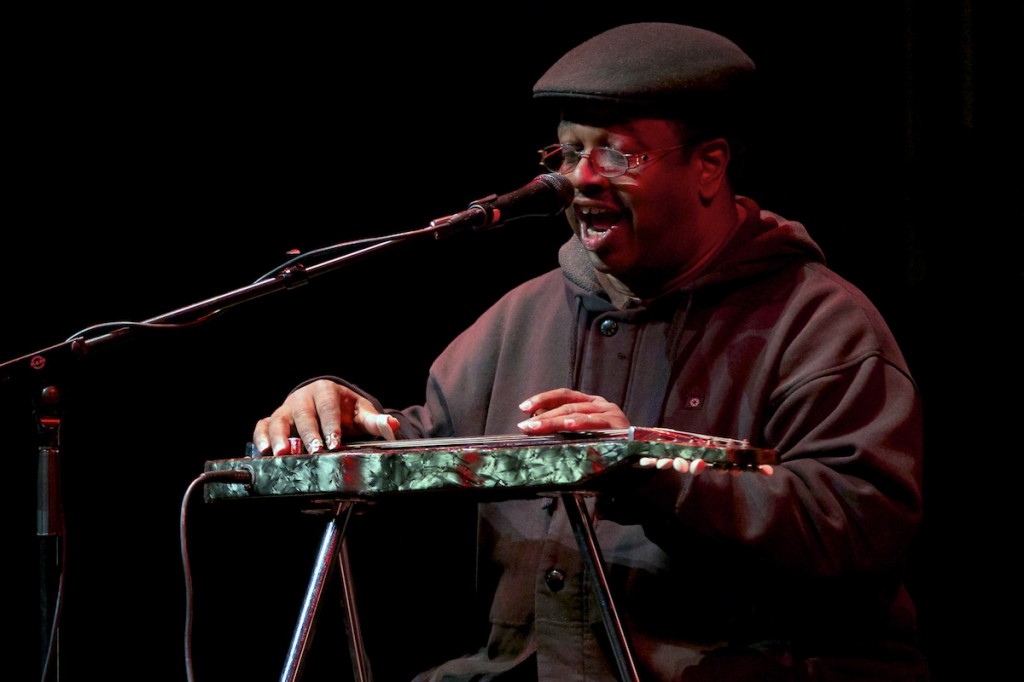 Aubrey Ghent, nephew of Willie Eason who started it all

The set was way more blues rowdy than pew churchy, and shifted into high gear early. Many Sacred Steel players start as drummers, and the percussive gallop of a trap kit boogied easily on the Brothers strings. I also finally got how the steel guitar voice can stand in for so many others and I swear I heard sax, harp and vocal (especially low strings for baritone) lines at many points. The set generously focused on the debut album including the Elmore James staple, “The Sky is Crying”, and the Brothers really tore into the ZZ Top like stomp of “Help Me Make It Through” with Calvin Cooke sharing some life perspective along the way. But with Randolph’s thwacka-thwacka intro to Hendrix’s “Voodoo Chile” the place took off and the power Randolph and the Brothers brought to the tune was magnified many times over to cyclone like intensity (no surprise that the band was featured as part of the Hendrix Experience tribute tour last year and, as I just learned, the new album is produced by Eddie Kramer, who twisted knobs on some of Hendrix’s most famous recordings). By the end of the set, the audience was on its feet with hands up high and a distinct Sunday morning feel in the air. Randolph switched to his Tele (as he did earlier in the set), and as the band left the stage, he kept going from the wings (and of course, circled back with all of the band to close it out). The Slide Brothers encored with a stirring cover of the Allman’s “Don’t Keep Me Wonderin’” (ironic for me, hearing Greg Allman do his tune in the same room last month) and the oft-covered classic “It Hurts Me Too”. 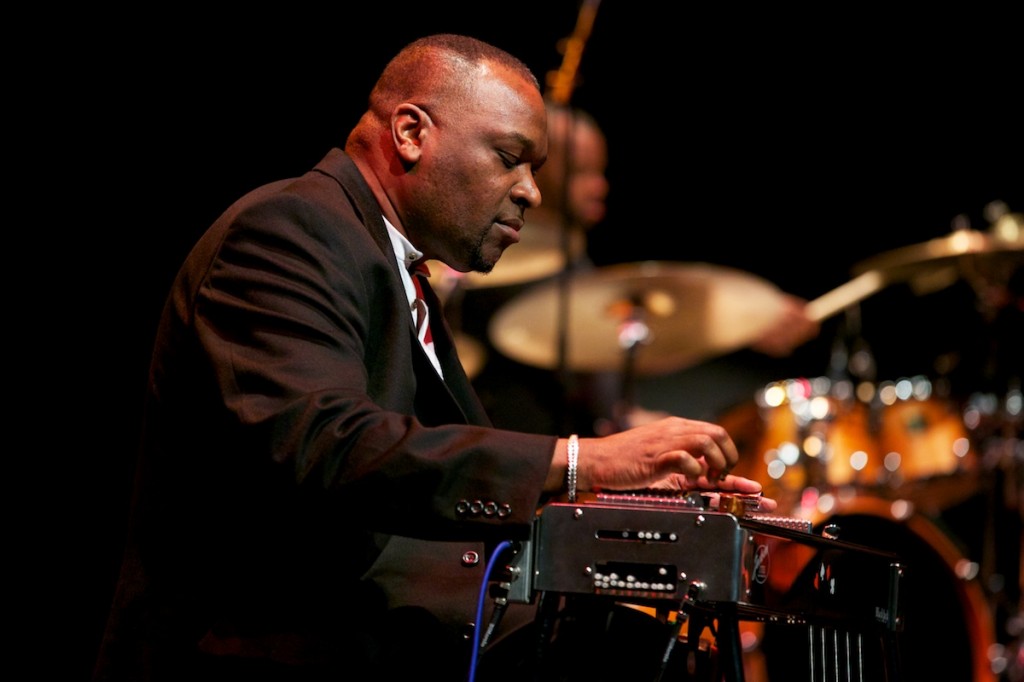 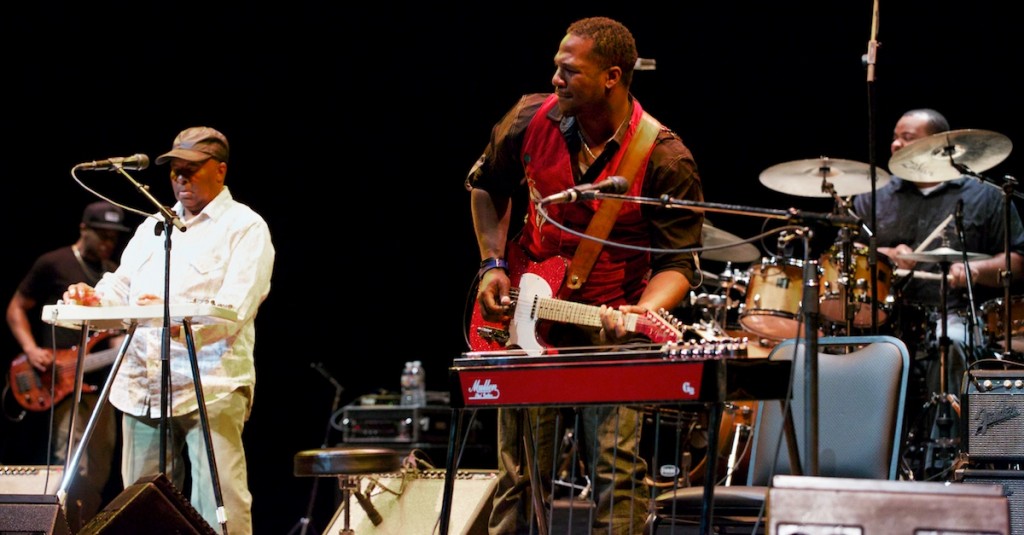 Randolph and Cooke on their feet, with Ray Holloman and Carlton Campbell

While at times it was difficult to sort out the solos from seated players on a slightly elevated stage, the sound of so much grit and slide, sweet and burn, all mashed together with such intuition was stunning. It must really be something for Randolph to share the stage with the progenitors of Sacred Steel he so revered as a young musician. 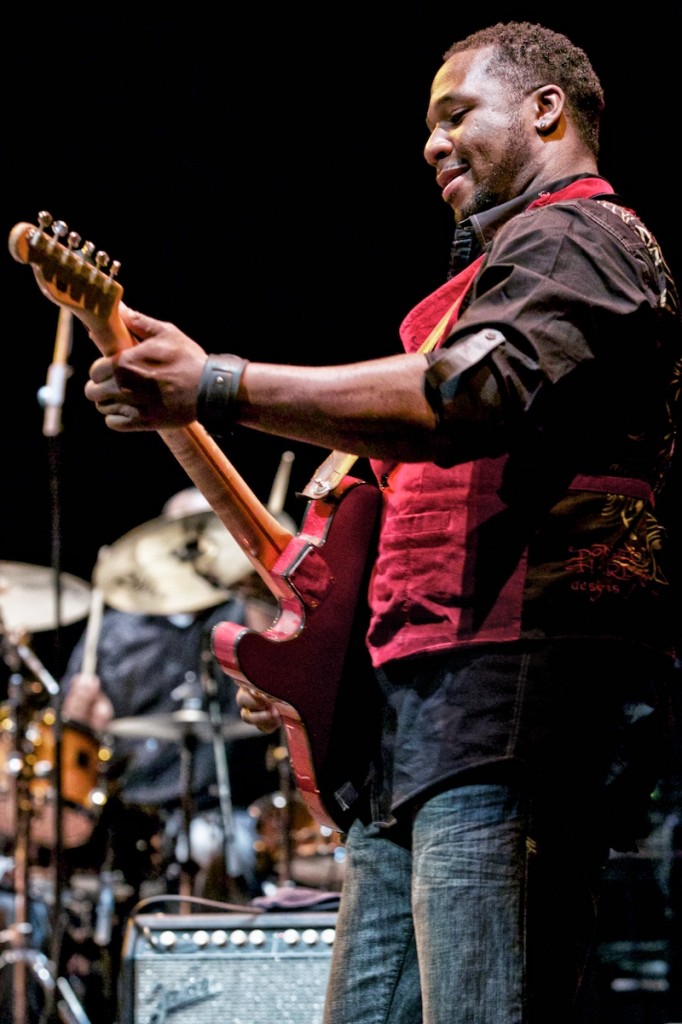 The roots of the Slide Brothers are largely non-secular, but they are making music for everybody to hear and celebrate. That is worth praising whatever your beliefs.

The Otis Taylor Band opened the show underway with their unique style of “trance blues”. Taylor, who spent many years away from recording until 1996, just released his 13th album, “My World is Gone” on Concord Music. Their set was moody and meditatively jammy, yet didn’t peg with anything rote or traditional. This was not a push/pull, light/dark blues take, but much more of an ebb and flow that was entirely captivating (of course, he did manage to throw “Hey, Joe” in there, too). The Taylor Band includes Anne Harris on fiddle, Shawn Starski on guitar, Todd Edmunds on bass and Larry Thompson on drums. Harris’ lively stage presence, and slippery-fiery playing (with no doubt some serious classical background) thoroughly enriched the set. Props to UCLA’s Center for the Art of Performance (CAP) for pairing the Otis Taylor Band with the Slide Brothers. 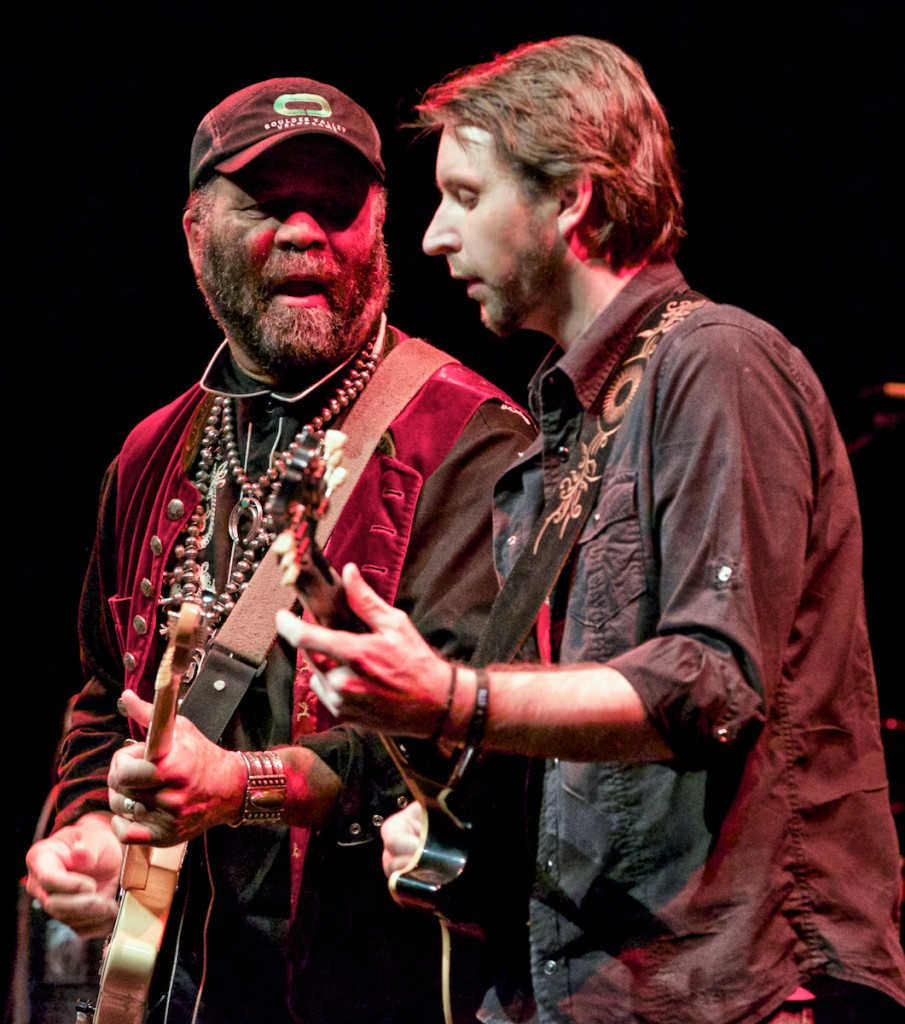 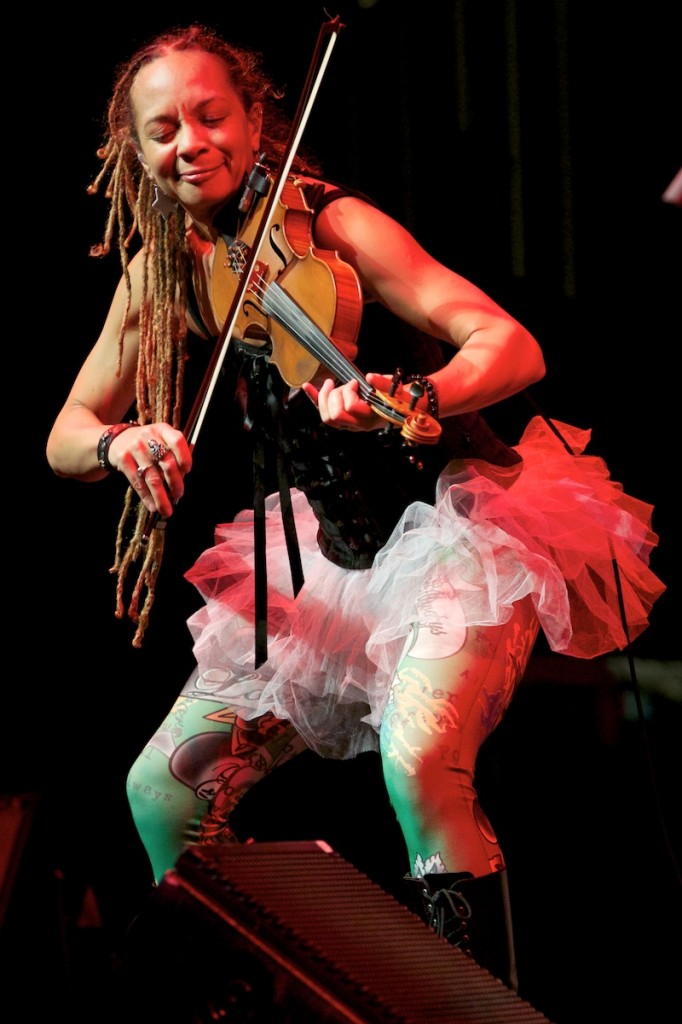 Reflections and Musings of a Jazz Fest Photographer
Scroll to top