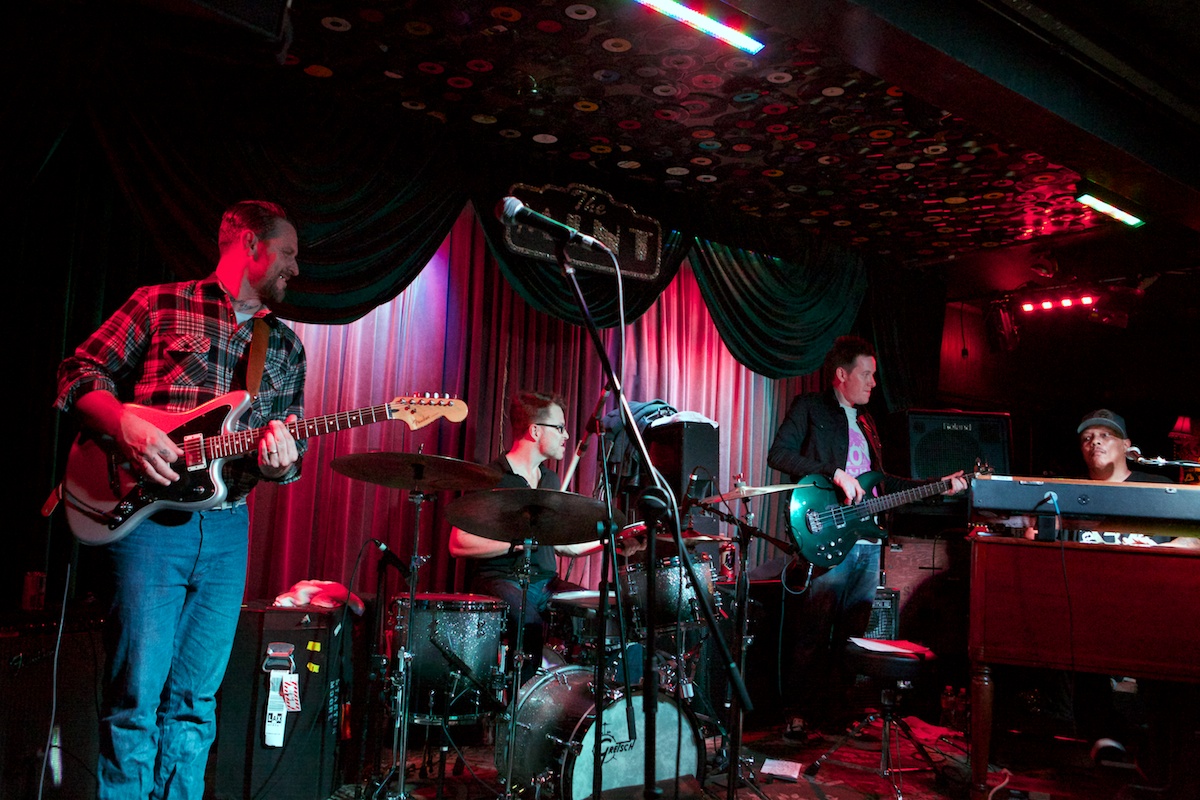 Certain celestial alignments skip decades, if not lifetimes, or at a minimum, involve covering great distances at greater expense. Think solar eclipses, Comet Hale-Bopp or if you get around, the aurora. Even then, there is the unexpected cloud cover that can scotch the most anticipated and well-planned events. While the intersection of talent that is Dragon Smoke may not operate on a celestial plane, the fact the band exists, let alone has endured for a decade, is pretty damn impressive. Comprised of the Galactic’s drummer Stanton Moore and bassist Robert Mercurio, guitarist/songwriter Eric Lindell and funk master Ivan Neville on keys and vocals, the band is a potential one-off that never offed. The lineage speaks propulsive, jammy funk meets soulful vocals as one would expect with the Galactic rhythm section, stinging Lindell leads, swampy Neville keys and alternating Neville/Lindell voices. They deliver that and then some. 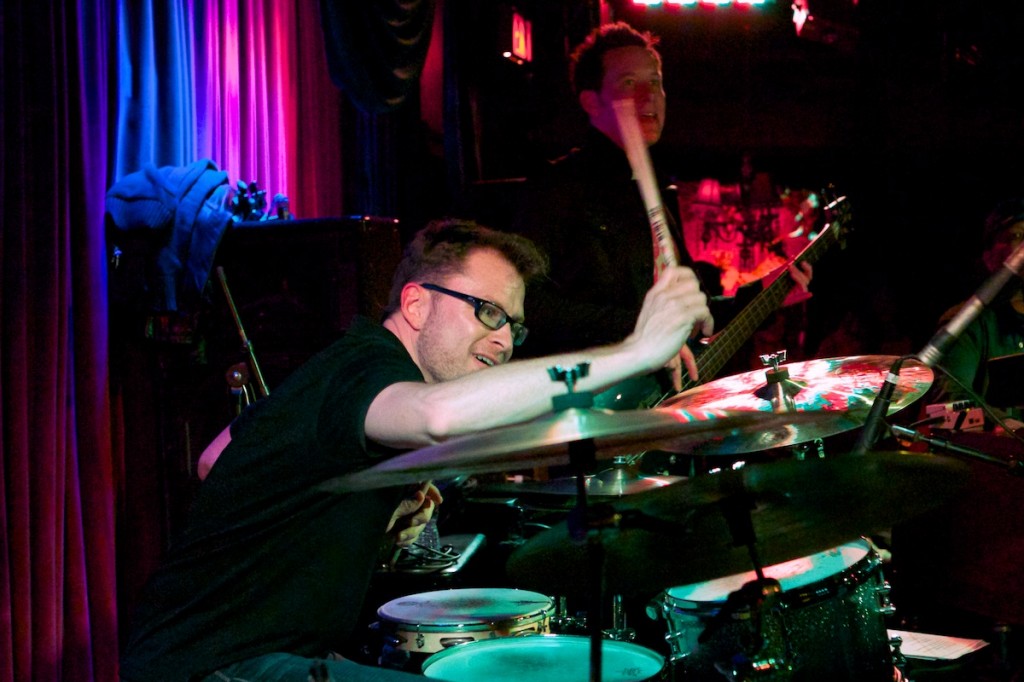 The demanding tour schedules of Galactic, Dumpstaphunk and Lindell, coupled with additional musical pursuits, make the right place/right time convergence of the four principals slightly more frequent than a Cubs post-season appearance, or at least cause for celebration. Yet, the band has been a fixture for 10+ years on the Tuesday between Jazzfest weekends, while managing to pop up for rare winter forays west of the Mississippi, including another December gig at The Mint as part of a 5-date West Coast-ish swing. Their show last year killed and was of one the room’s most memorable of 2011. 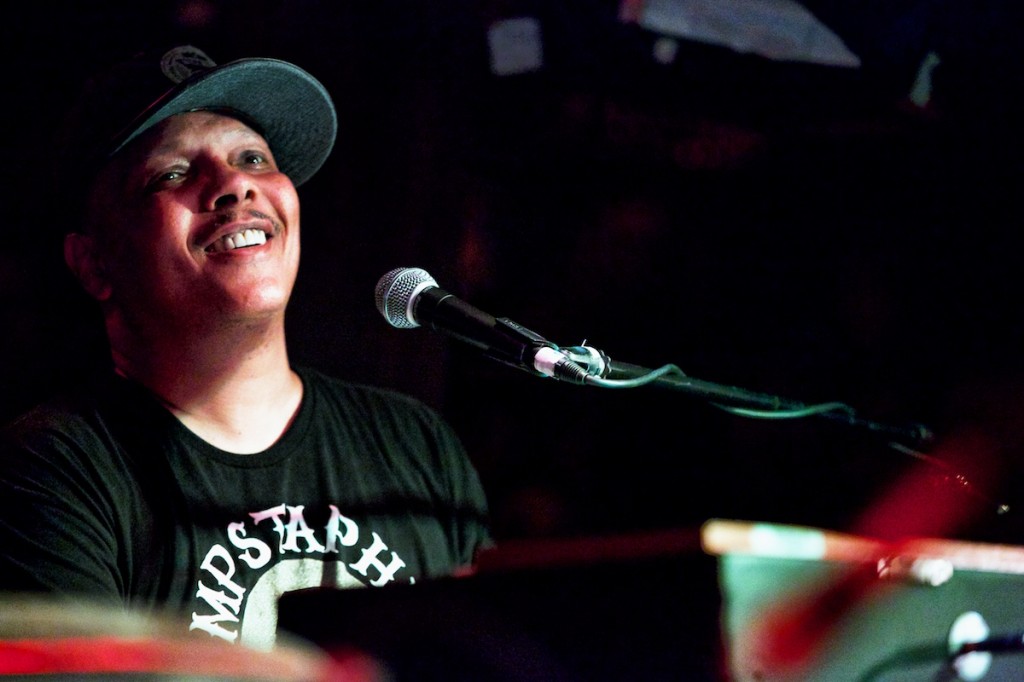 Ivan Neville having a good time at The Mint

The musical affection between the players is obvious from the get-go. Like a family reunion where you don’t see enough of each other, stay up all night, then go on with your lives until the next one. The material is generously shared and enthusiastically played. And while many similar collaborations often lose focus, tread on reputation or simply go sideways, these guys play for keeps. It sure doesn’t feel or sound like a side project. 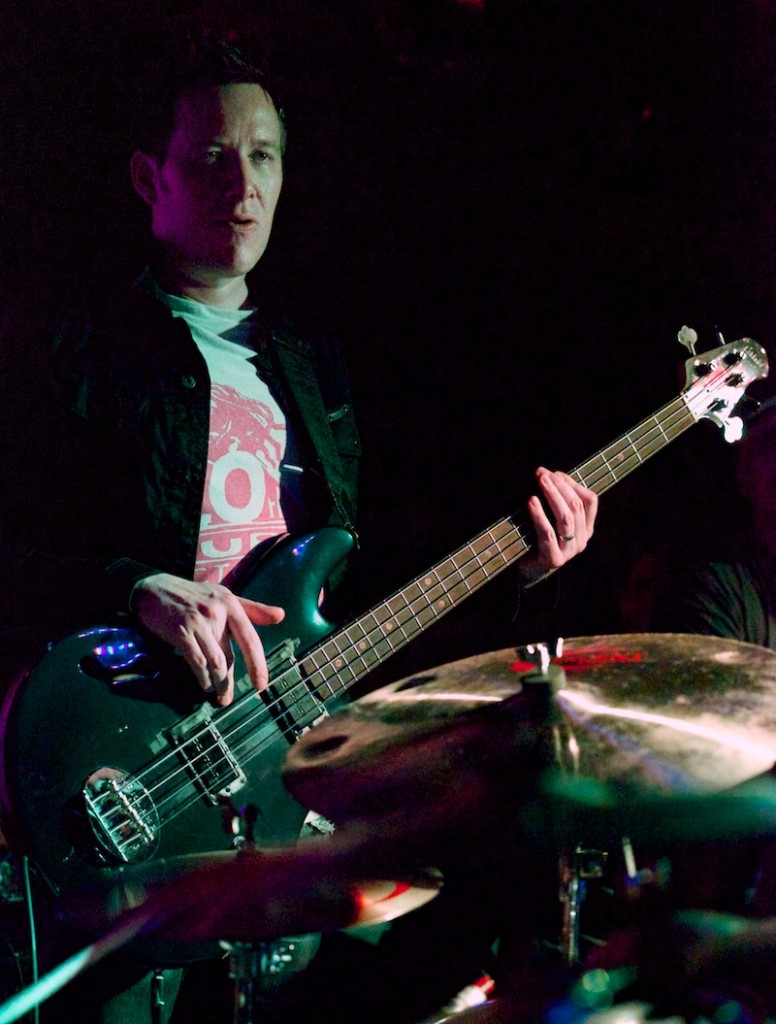 Opening with the country ramble feel of “Sunday Morning”, the trademark swapping of Lindell and Neville led tunes jumped right into the Dyke and the Blazers funk of “Let a Woman, Be a Woman” with Stanton Moore sneaking in a NOLA brass snare rhythm between a barrel full of fills, and Neville chomping at his clavs and working his B3. Funky, fun, and delicious. The stutter step blues rock of Lindell’s “Country Livin’” (from 2009’s “Gulf Coast Highway”) sounded pretty damn good, accented by Neville’s Hammond runs and Moore’s cascades, and the War-like soul of father Aaron’s “Hercules” brought things back to an appropriate simmer. A couple of Lindell tunes followed, including “Two Bit Town” (from 2006’s “Change in the Weather” and the pretty “Lullaby for Mercy Ann” (from “Gulf Coast Highway”). The Meters were in the room with “Out in the Country” (“nobody plays it like this” professed Neville), before Lindell stretched out with the breezy “Valerie” (a Zutons’ song most notably covered by the late Amy Winehouse). The first set closed with Gerald Tillman’s (aka, Professor Shorthair) “Padlock” (from Neville’s 1995 “Thanks”) anchored by Neville’s B3 and clav blend punctuated by Lindell’s needle stick delivery and a perfect Meters-esque groove over the lines “somebody’s been sleepin’ in my bed”. 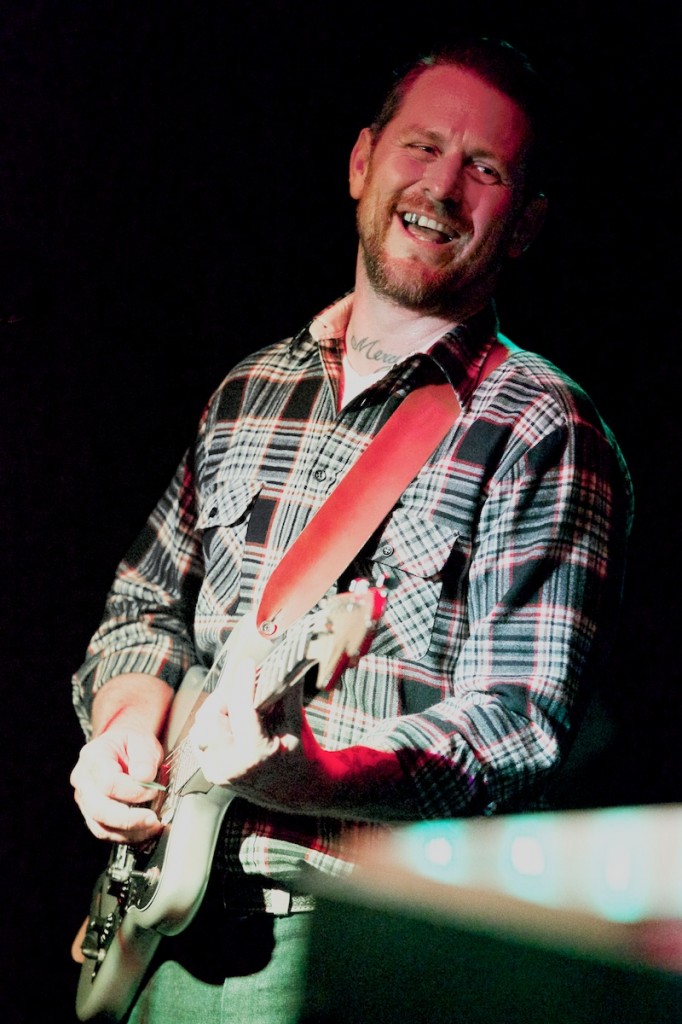 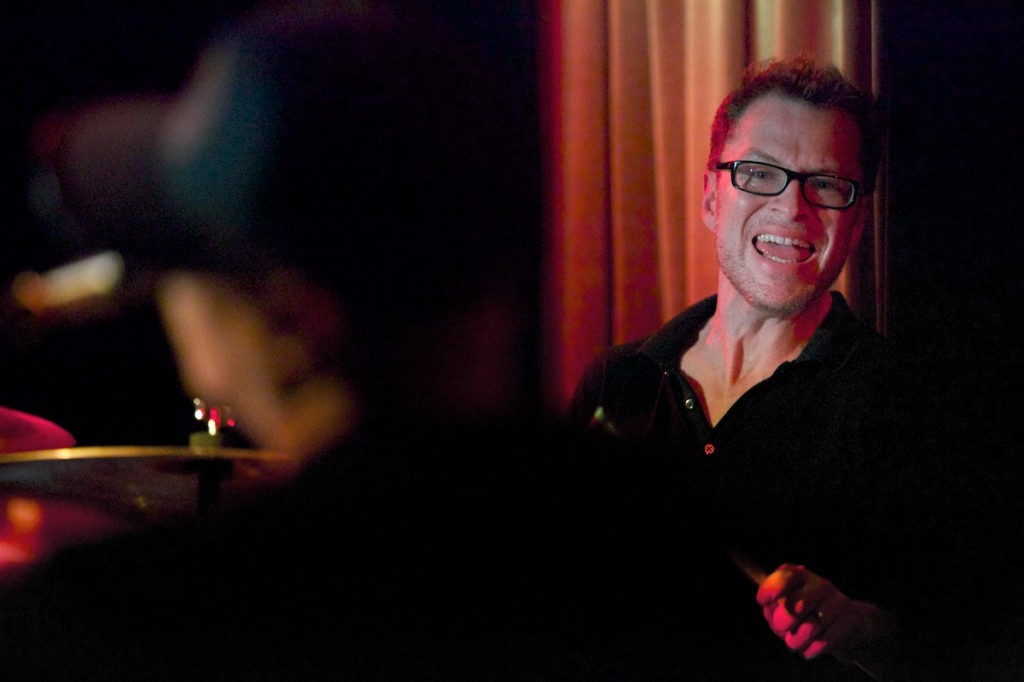 The sold out room had a climate closer to a Bikram yoga class than the cool rainy weather outside, so some oxygen was in order for the break. By the time the band returned for their second set, everyone was a bit more refreshed and most stayed. 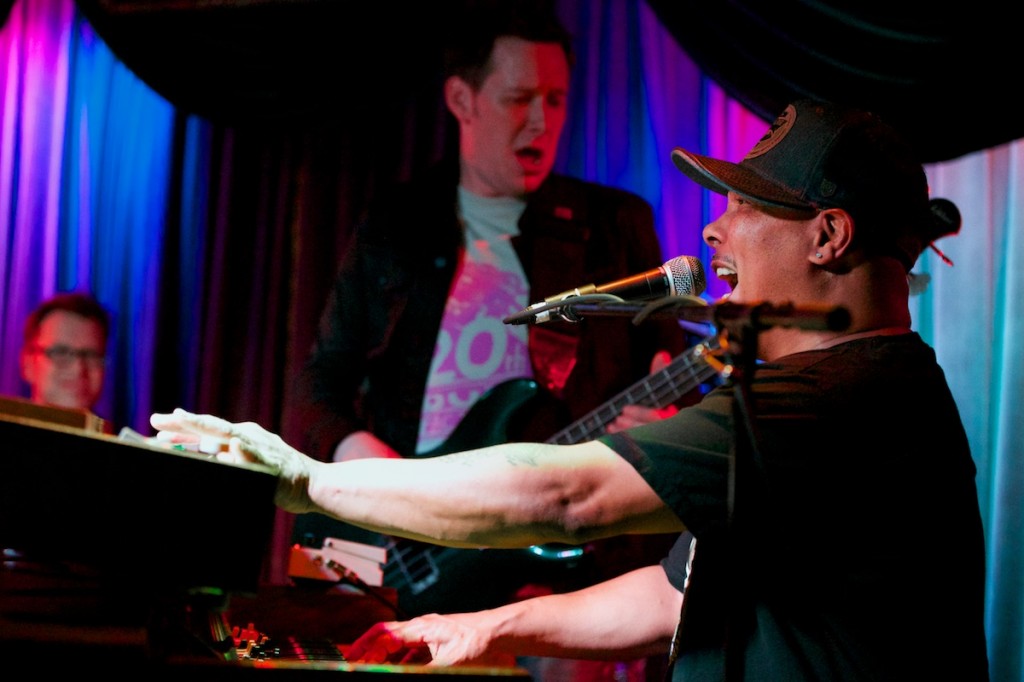 The clav-B3 combo of Ivan Neville fueled both sets

The 10-song set went appropriately deeper than the first. Bill Withers’ “Grandma’s Hands” began with spare soulful “uh-huhs” from Neville and built into a creeping, slippery jam that had the crowd singing the “like the way you work it” chorus part of the tune. One of the night’s high points, for sure. The band brought a relaxed loping ‘tude to the Mardi Gras Indian driven “Indians, Here Dey Come” and even a touch of Dead influence meets NOLA backbeat to it, thanks to some Jerry-like inflections from Lindell and Moore’s expansive snare vocabulary. Another Lindell tune, “Won’t Be Long” (from “Change in the Weather”) featured a slow voltage bridge and blue-eyed soul progression that lives in Lindell’s wheelhouse. “Slippin’ Into Darkness” is such a natural cover for the band, they should have written the classic. All the pieces fit just right. Dropping in a “Get Up, Stand Up” tease, then flipping into The Meters “Fire on the Bayou” and again to Steve Miller’s “Fly Like an Eagle”, before landing back to “Slippin’” was pretty fine. Curtis Mayfield’s “If There’s a Hell Below (We’re All Gonna Go”) was sandwiched between a few more Lindell tunes that brought the set to a close, and featured some well past midnight clav explorations by Neville.  The clock was pushing 1 AM on an early Thursday morning by the time the encore of Billy Preston’s “Will It Go Round in Circles” had wrapped. 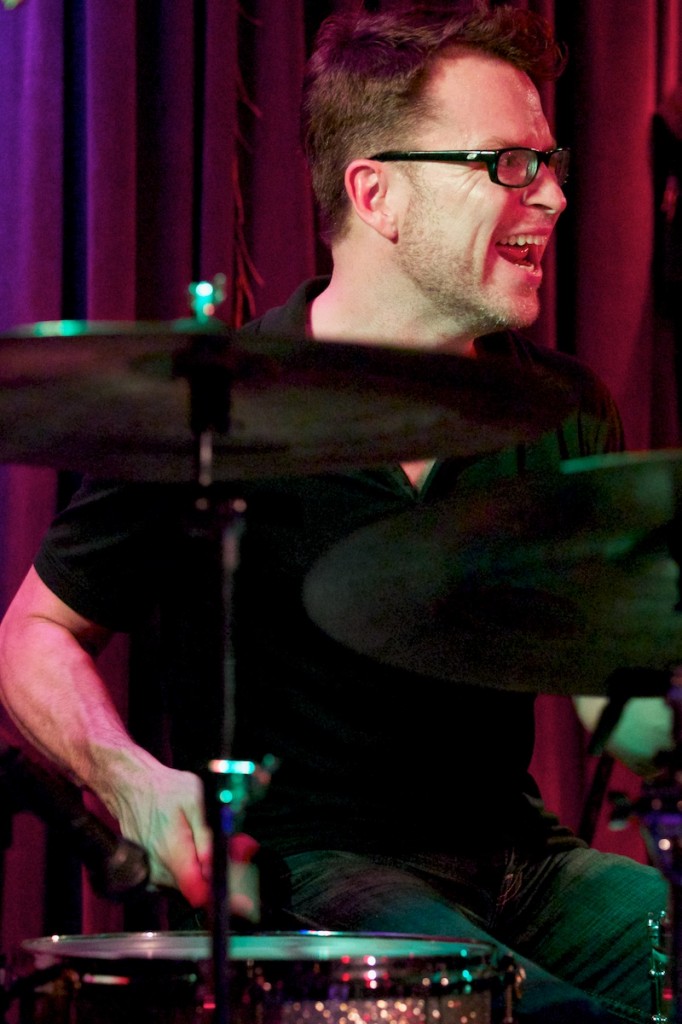 Stanton Moore was killing it all night long

Robert Mercurio’s recent interview with jambands.com is illuminating reading on how these guys find a way to stick together, and the glue that makes it happen. With grueling schedules and commitments all over the place, the band must want this pretty bad (heck, it would be way easier not to do it). Nonetheless, you may have a better chance of catching an eclipse some years, so best to presume their next orbit is their only orbit. If you are in NOLA the days between the Fest or within hollering distance of their brief trips west, consider yourself lucky and get your ass down to One Eyed Jacks or other respectable live music establishment. This constellation may not come around again, and if it does, you better be­­ there. 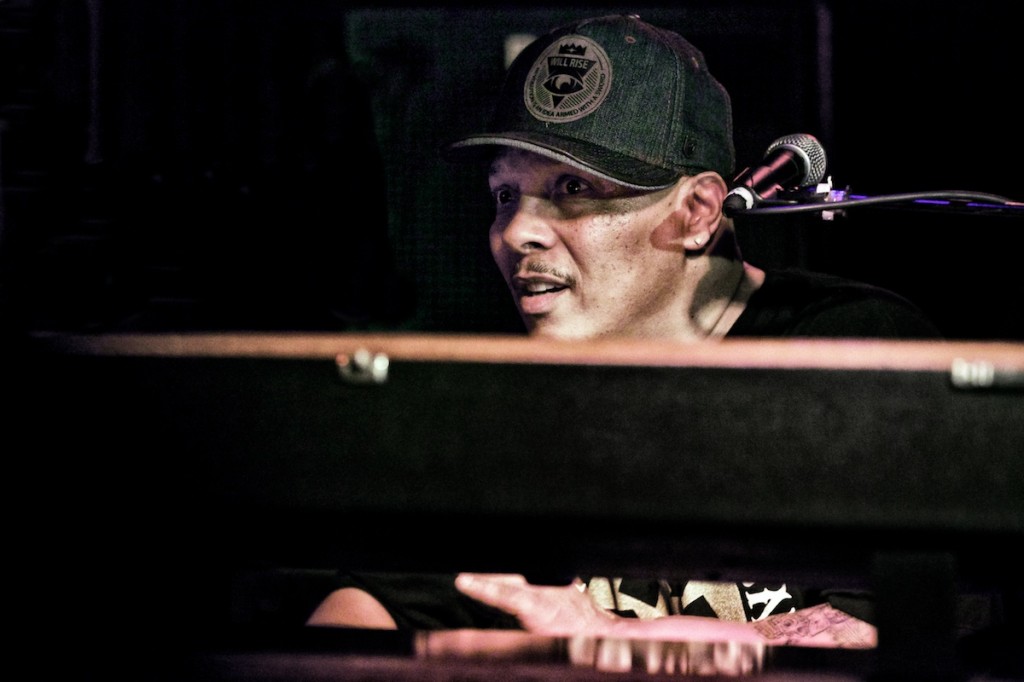 Ivan Neville with Dragon Smoke at The Mint 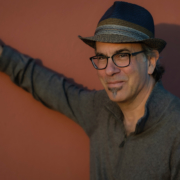 Values and Principles That Matter Most: Reflections on a Creative Path by ShoutOutLA 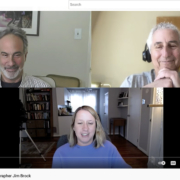