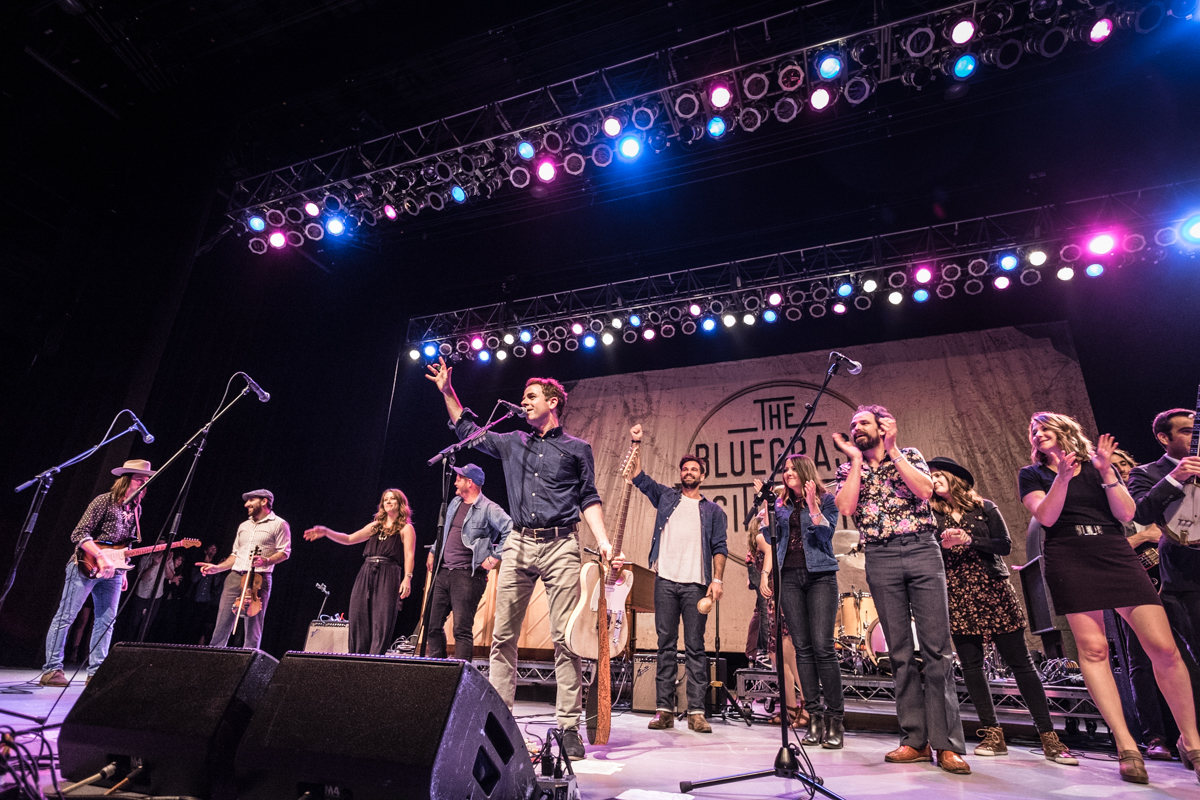 Yup, we got an LA Bluegrass Situation on our hands, and with Way Over Yonder a goner and a tinge of real time Hardly Strictly Bluegrass envy, that 10-hour hang at the Greek on a balmy Fall day couldn’t be any more welcome round these parts. Ed Helms, who co-founded BGS, and Amy Reitnouer their Executive Director, love the music deeply. Well, they hit their mark without missing a strum, and it showed in a strong lineup and front porch feel that continued long after the sun went down.

During the earlier part of the day (music started at 2 PM), a smaller stage was set up by the venue entry, and featured acts almost at eye level to folks listening, dancing or taking in a smattering of games, crafts and food trucks – a nice Sunday in the park atmosphere. Wild Reeds, L.A.’s Dustbowl Revival (do these guys ever take a day off?), New York’s Spirit Family Reunion, and Sam Outlaw all had their turns, and I gotta say, Outlaw’s “Jesus Take the Wheel and Drive Me to a Bar” was an afternoon highlight. 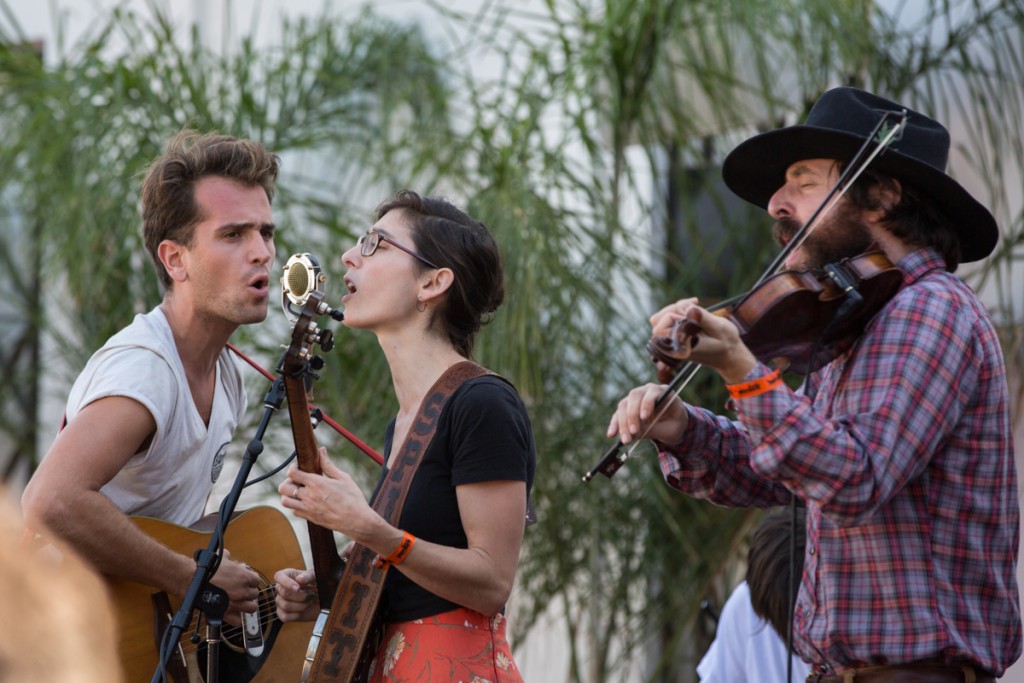 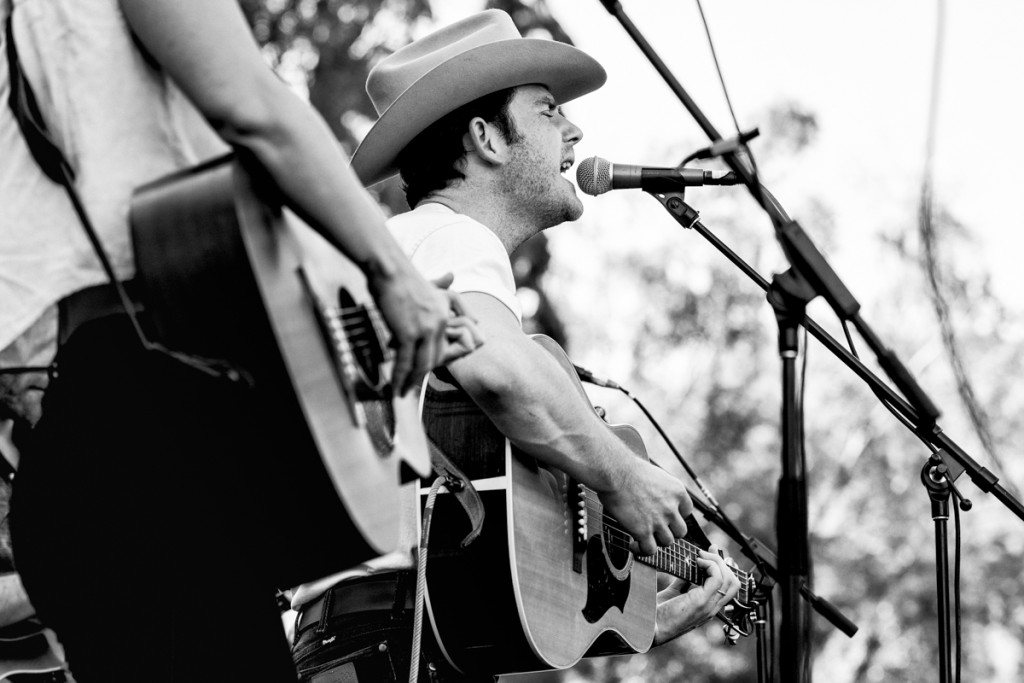 Sam Outlaw comes up with an Uber alternative 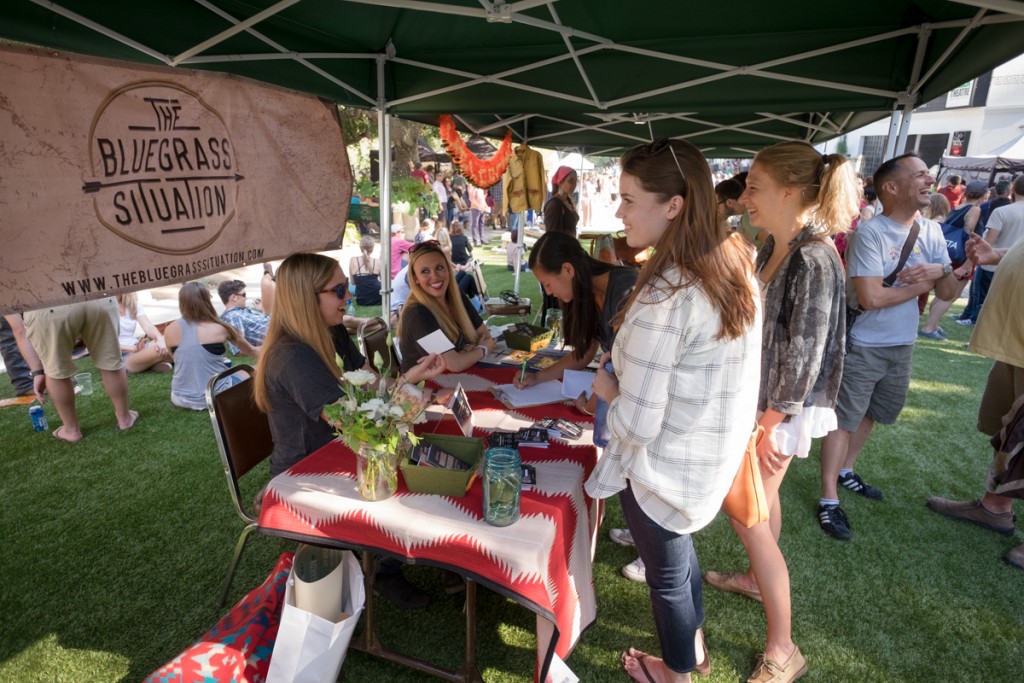 BGS at work, not a bad day job

While I had my eye on the more familiar evening performances, the revelation of BGS 2015 was Della Mae. Led by Celia Woodsmith on vocals and guitar, and two-time Grand National fiddle champ Kimber Ludiker, this was an exhilarating set and hit all the right notes for my happy ears. Closing with the Stones “Love in Vain” was especially right. 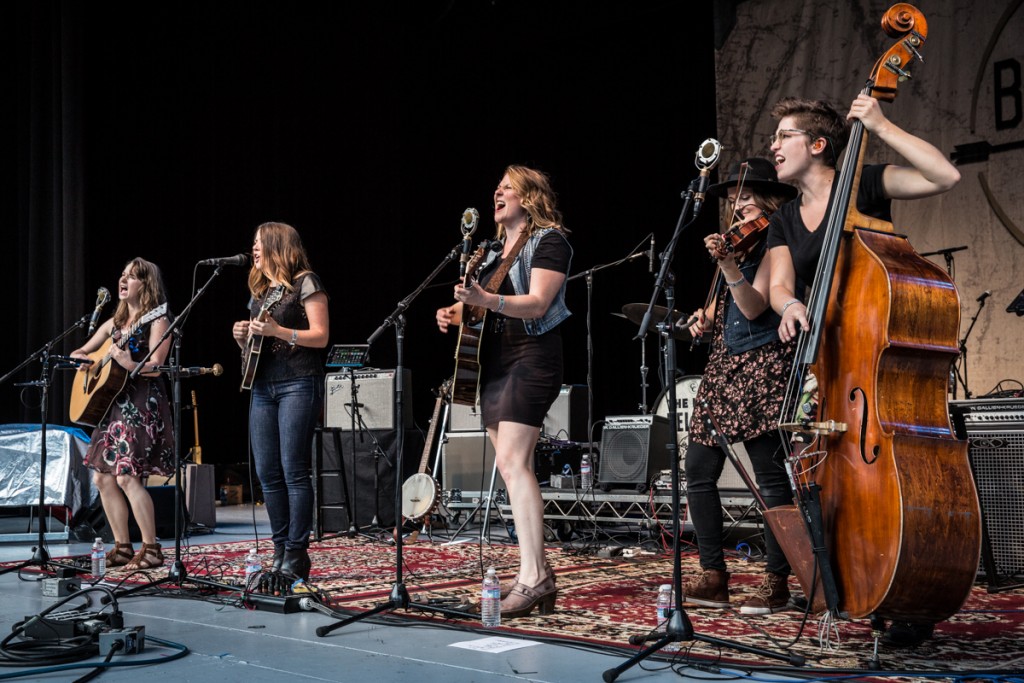 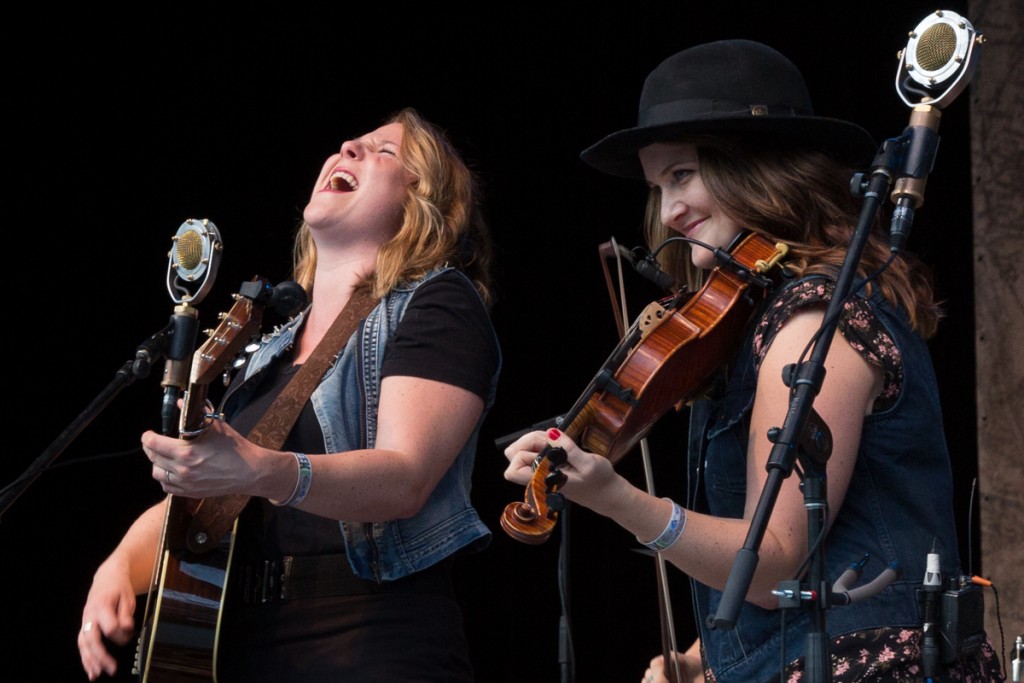 When I first heard Gregory Alan Isakov at Newport Folk 2014, he was playing to a pin drop crowd and the emotion of his songs at BGS 2015 seemed to swell as the sun dropped. “The Stable Song” was just beautiful. 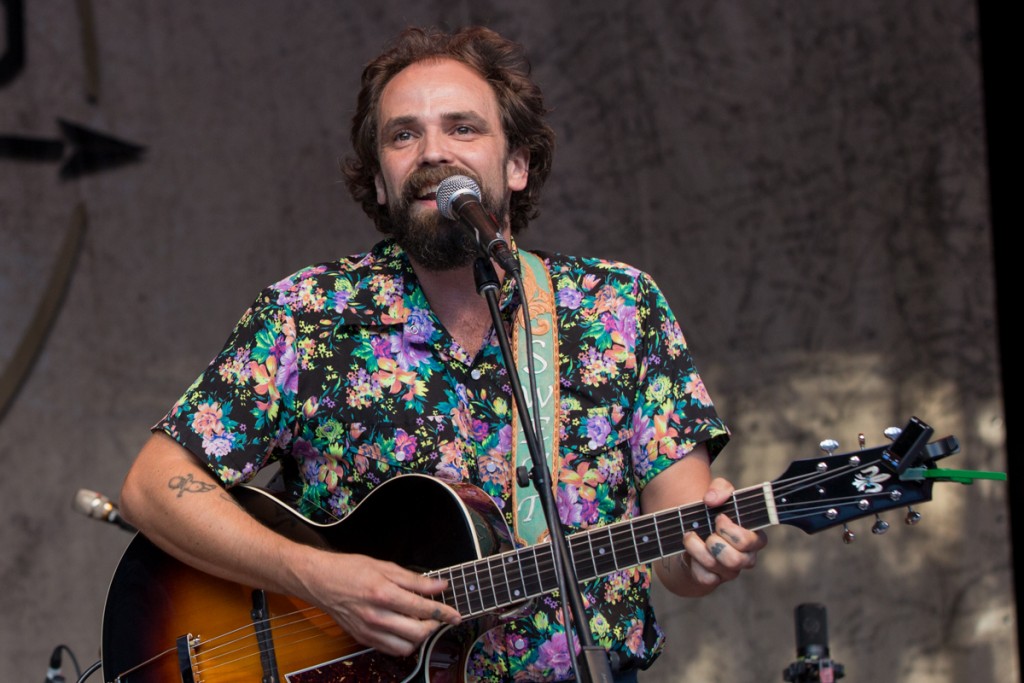 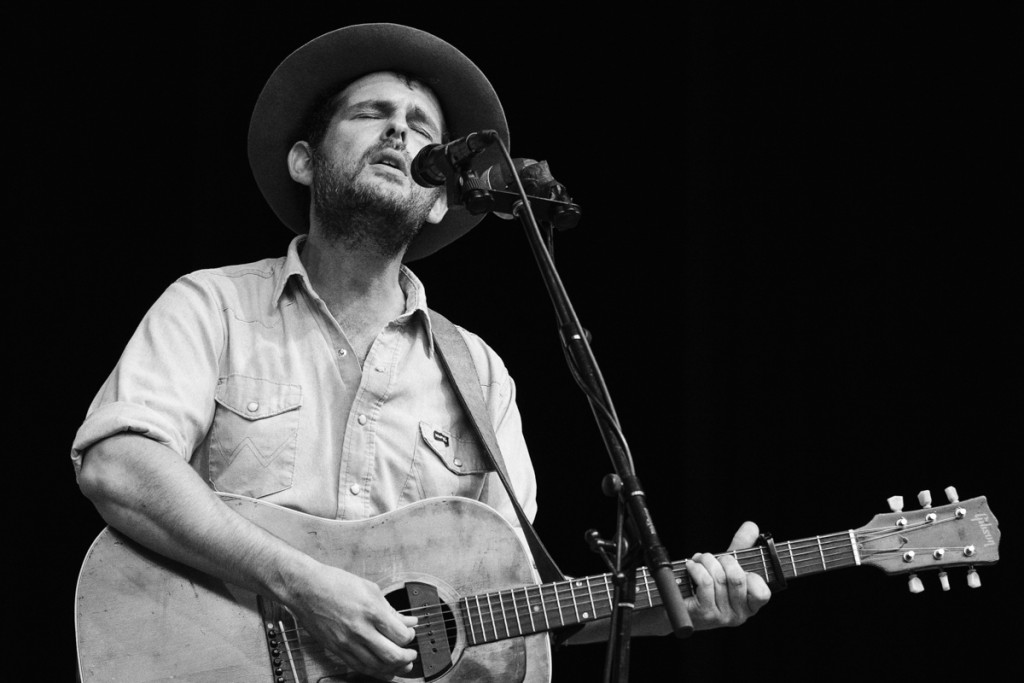 My introduction to the Lone Bellow came at Way Over Yonder 2014, and they are a band to watch. Certainly one of my favorite of recent years and no let down at LA BGS, with Zach Williams, Kanene Donehey Pipkin and Brian Elmquist charging through tunes like “The One You Should Have Let Go” and “Green Eyes and a Heart of Gold” with power, desire and spirit. 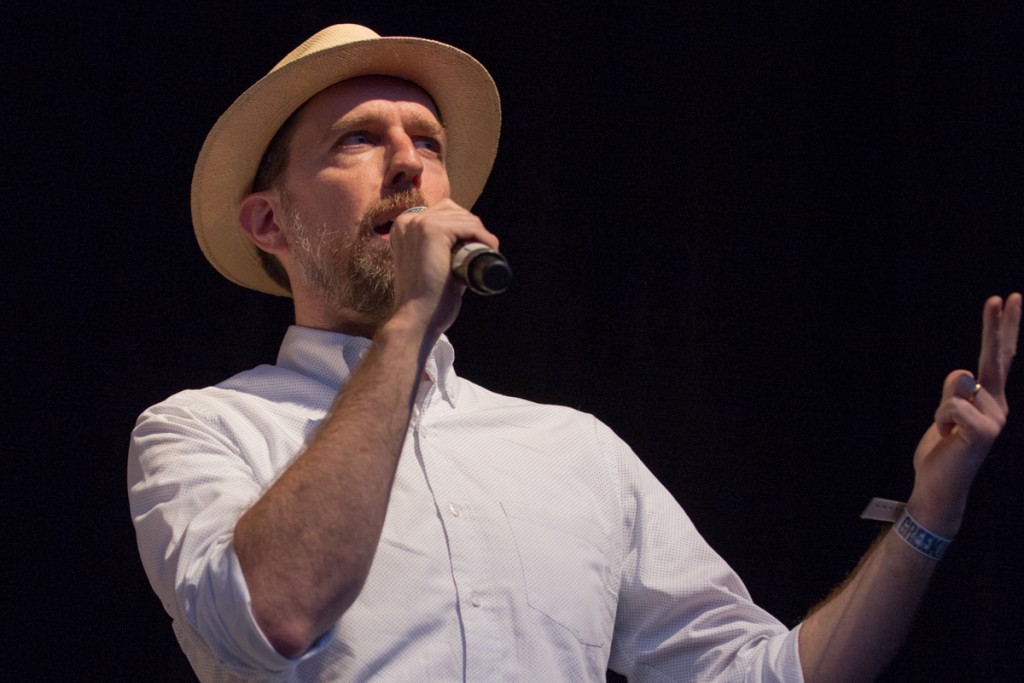 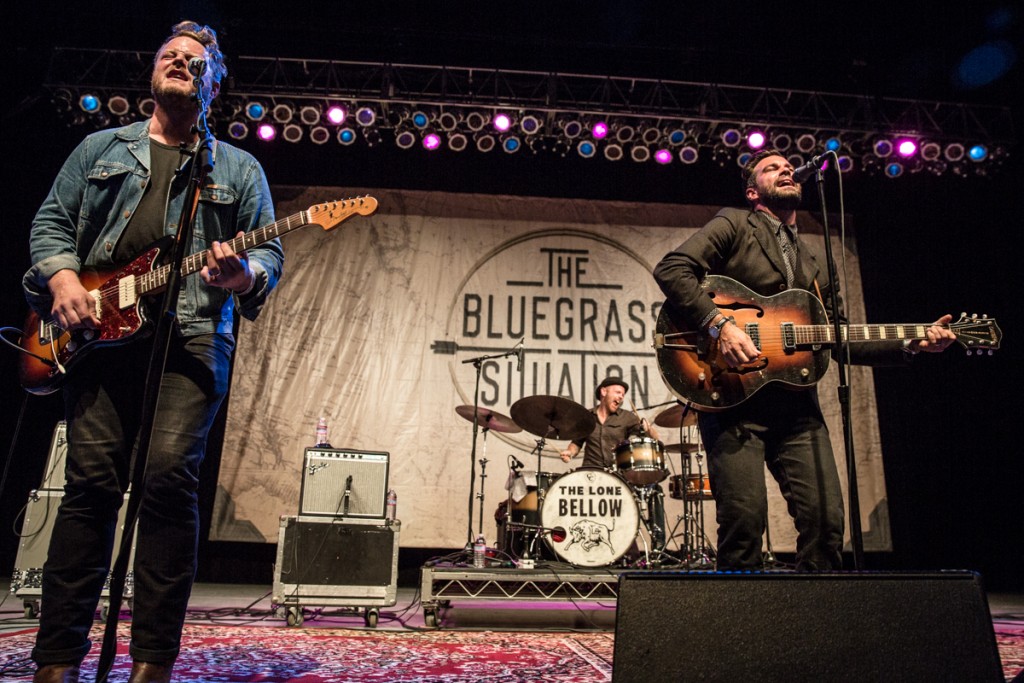 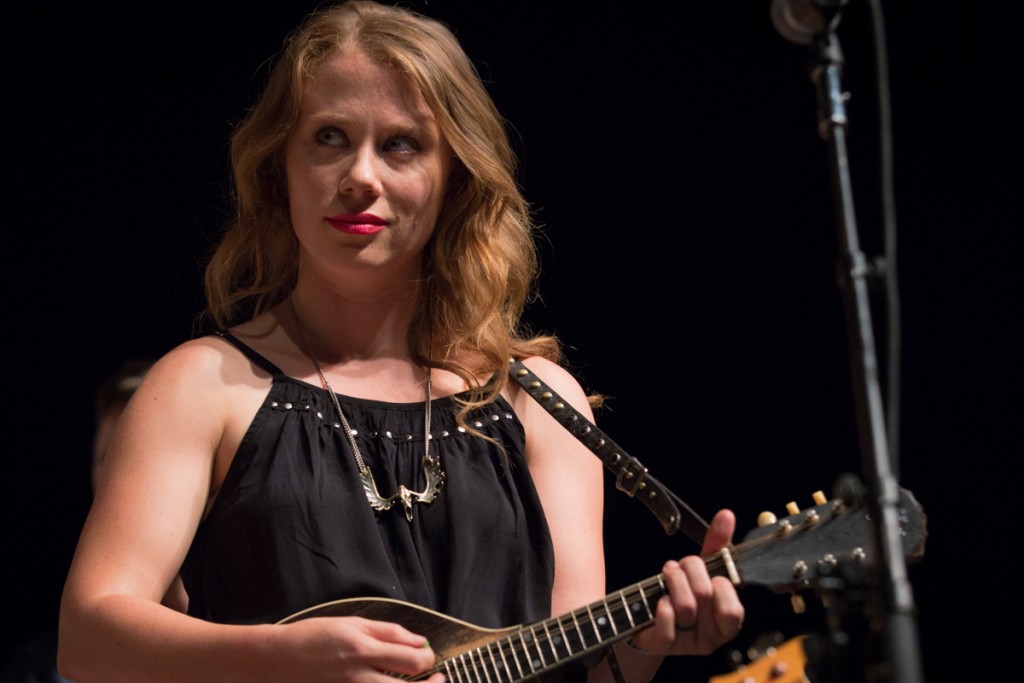 I had not seen The Punch Brothers live before LA BGS and their contemporary stretchgrass (yeah, I made that one up) is something to behold. Can’t think of many outfits that can pivot so effortlessly from Debussy to “Rye Whiskey” to a Strokes cover (at recent shows), as the soon to be Wobegon Chris Thile and his Punch Brothers mates. 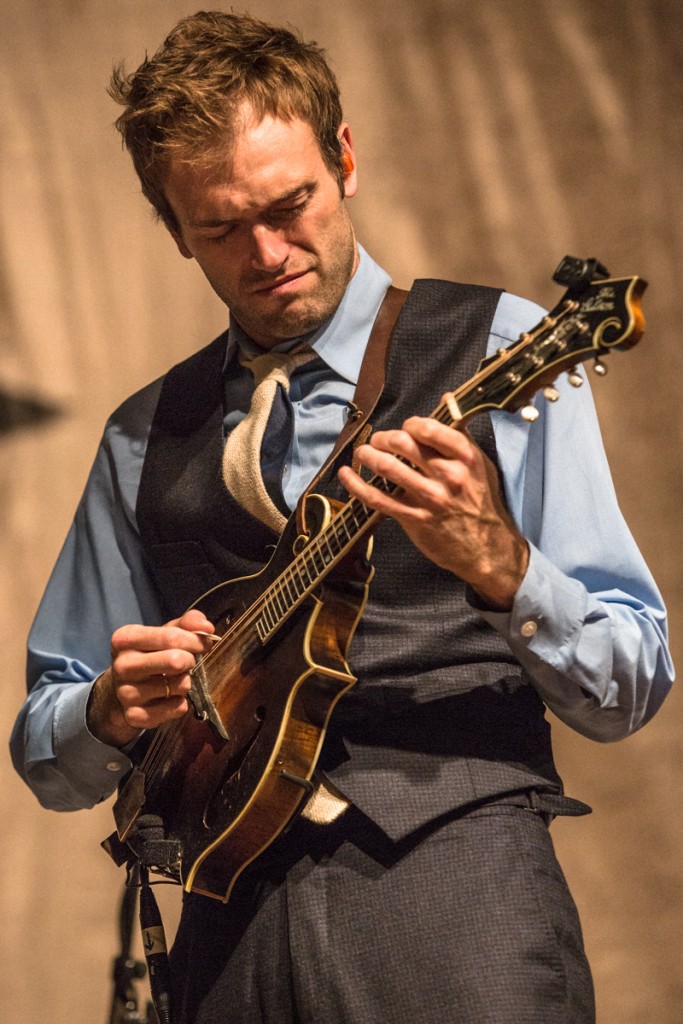 Chris Thile and the Punch Brothers were sterling 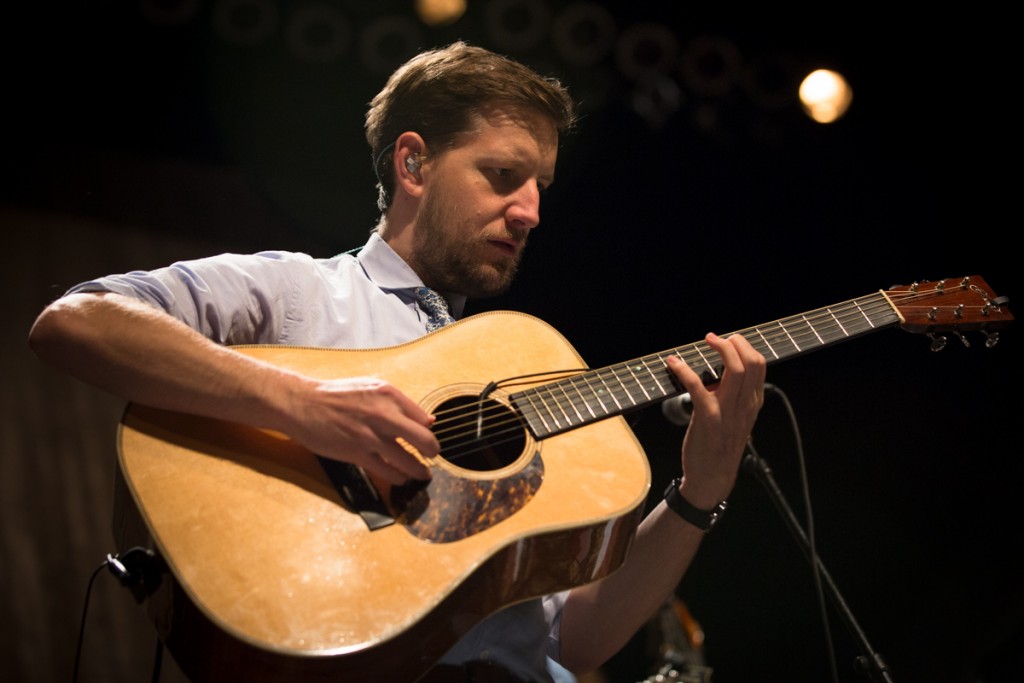 Chris Eldridge spanning the neck with the Punch Brothers

Brothers Taylor and Griffin Goldsmith, are sounding even better these days with the addition of Duane Betts to the Dawes touring band (not to mention their fine “All Your Favorite Bands” album released in early summer). I’ve heard Betts a few times in recent years and was struck by the strains of his father I heard in his playing. Betts is a great foil for Taylor Goldsmith, and the hometown crowd heard an inspired set. An all hands finale closed with “Knockin’ on Heaven’s Door”. 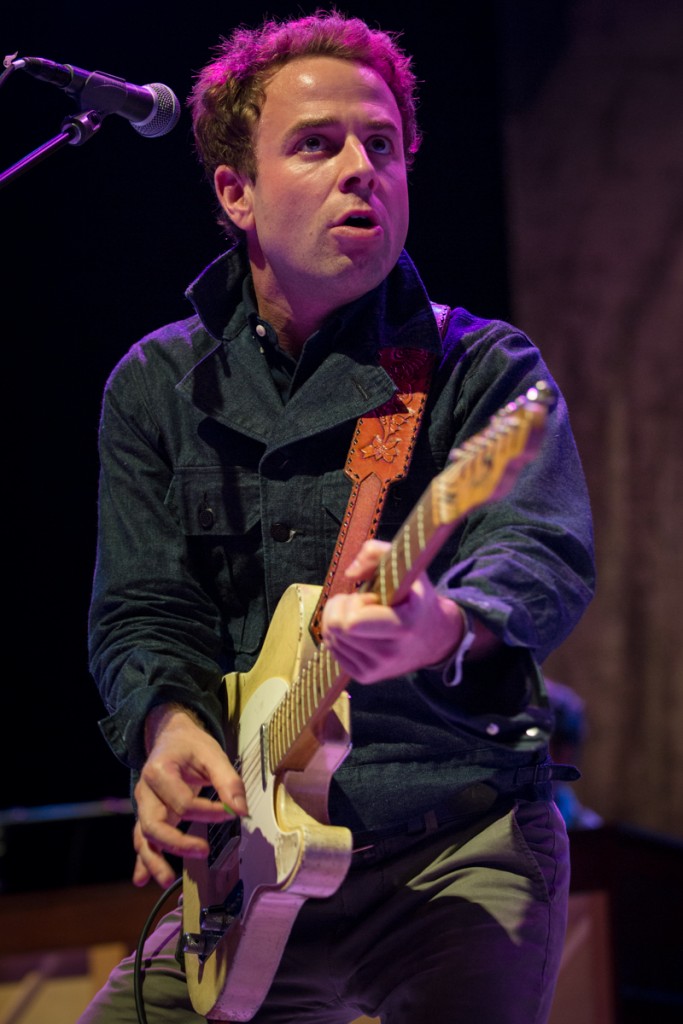 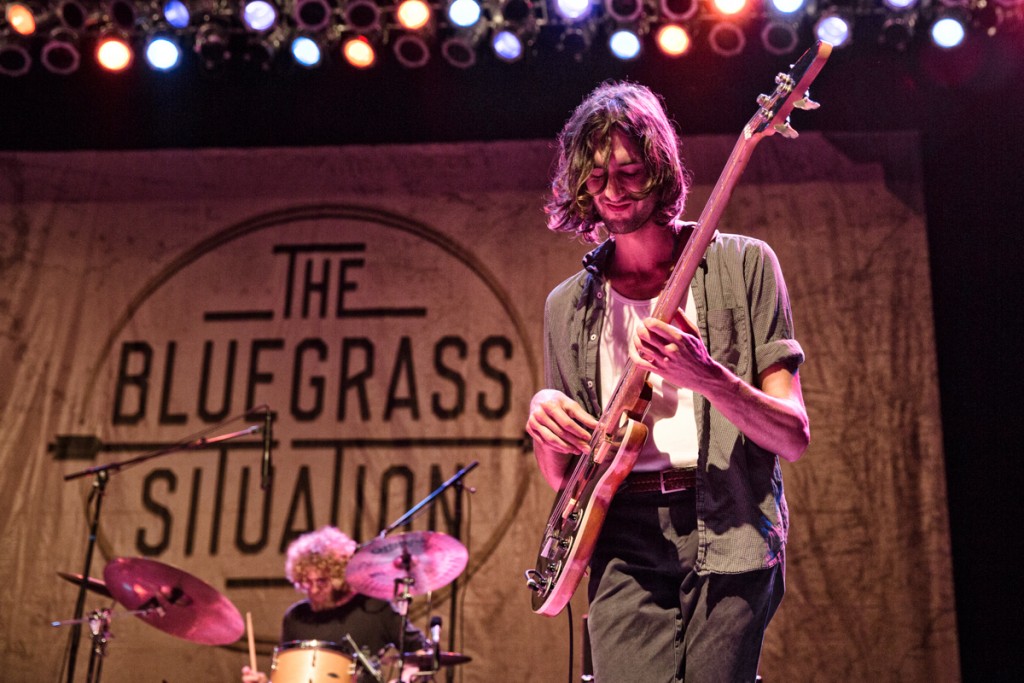 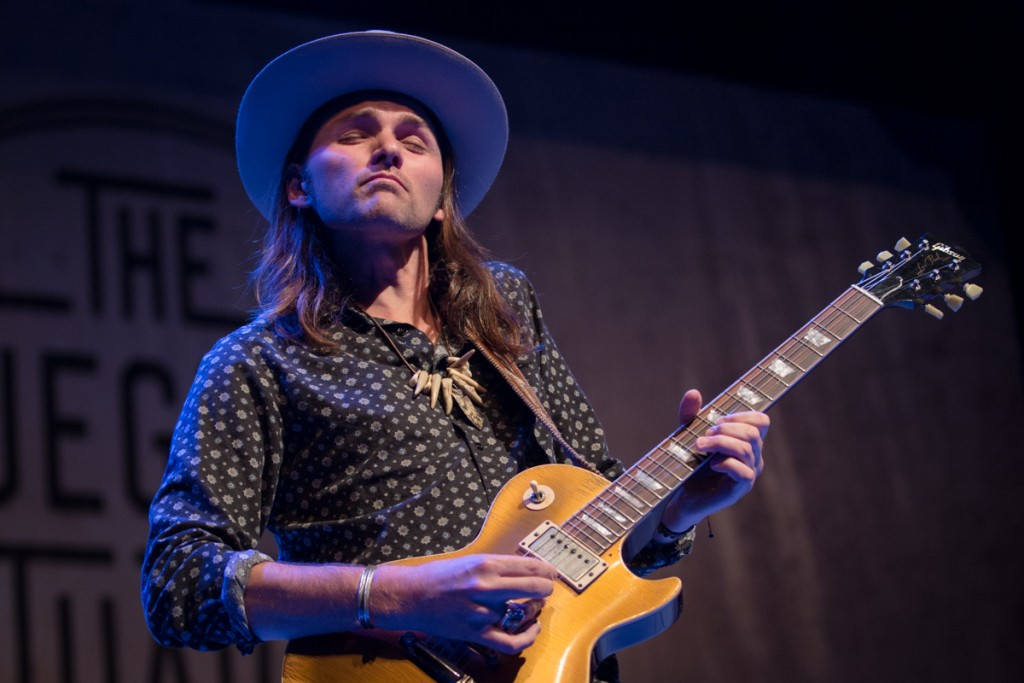 Duane Betts is a great fit with Dawes 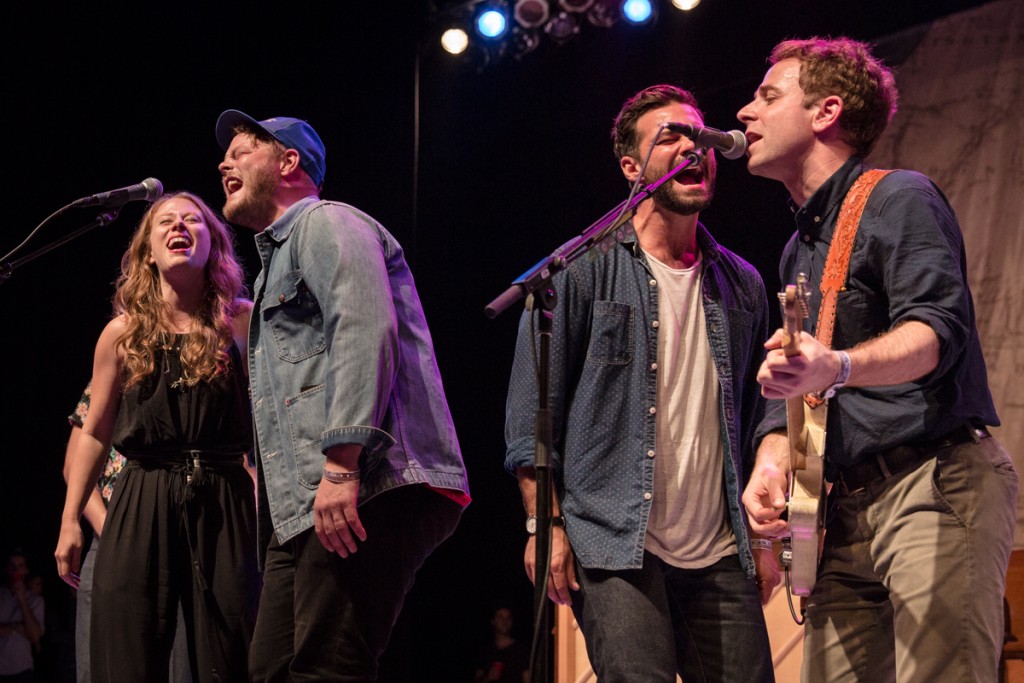 Lone Bellow joined Taylor Goldsmith for an all hands finale

Bluegrass is an idiom steeped in tradition, yet constantly molting and taking new forms. For me, that is what BGS nurtures, the old and the new, the sacred and the fresh. All were on display, with a contemporary bent delivered by traditional instruments. Whatever grass you want to call it, let there be fiddles and mandolins and brilliant flatpicking and heart breaking harmonies with every new day. I’d happily put BGS in charge of that. And, hey, where else in this town you gonna see an early teen proudly sporting a Bill Monroe t-shirt worn like we used to wear Zep? 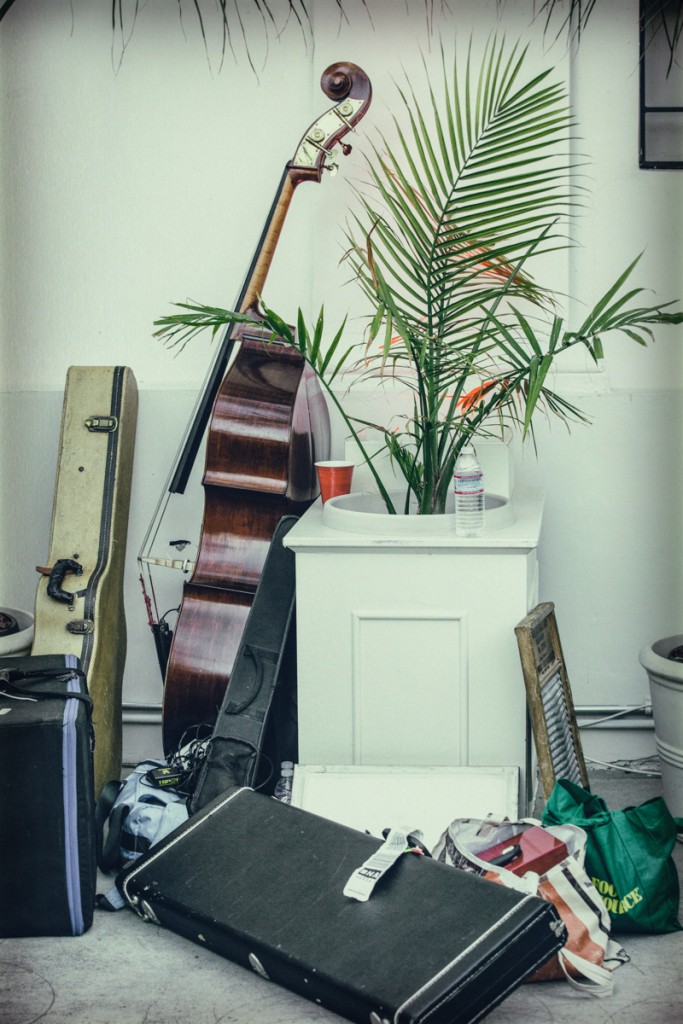