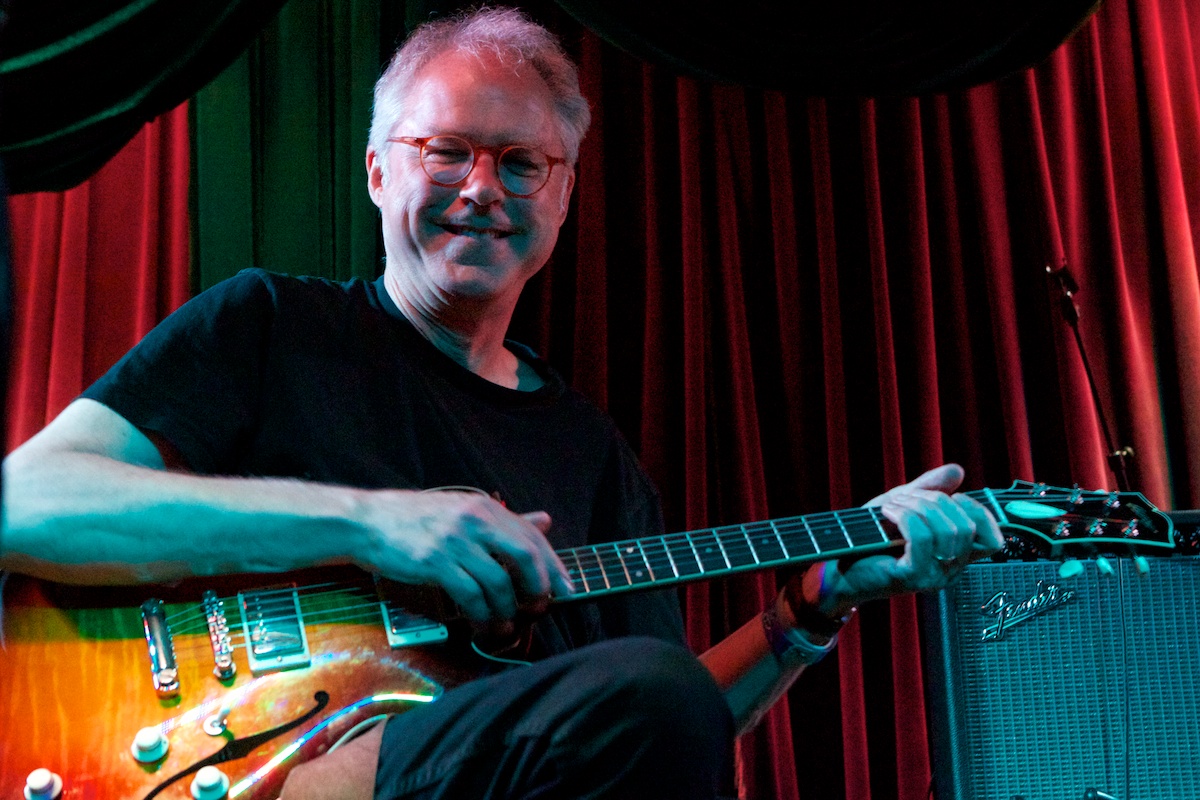 A guitar’s frequent absence from a jazz arrangement is both a uniqueness of the idiom and distinguishes it from the string driven sound of rock and blues. As an early ‘70s kid I was wide eyed about rock and all about guitars. When I discovered jazz and found horns and keys where strings should be, it both opened me up and whet my appetite. While I knew Joe Pass was the greatest living player of the day and no one could touch Wes Montgomery, I was not drawn to those stylings as I am now. My attention span was short. I was the rock enthused, looking for the rock infused. Jazz crossover in both directions spoke to me. Sure, fusion filled the gap. Early Return to Forever, the Mahavishnu Orchesta. Buried alive under all those notes never felt so good. Yet, it was not enough. I wanted touch, space, soul, too.

The mid-‘70s through the early ‘80s were fertile ground for a fresh approach. Pat Metheny teased new elements into a guitar led quartet with a traditional tone played in untraditional ways and settings. It didn’t attack. It slipped. It flowed. John Abercrombie, was literally, timeless. His 1974 debut album of the same name with Jan Hammer and Jack DeJohnette, was a different kind of “fusion” altogether, using a muted tone and exploratory playing to expand boundaries not by pushing, but by painting. Ralph Towner’s 12-string Guild or nylon 6-string were as comfortable alongside Gary Burton, Chick Corea or Keith Jarrett, as they were creating evocative landscapes with his solo or ensemble work. All left lifelong imprints on my musical psyche.

As with these predecessors, Bill Frisell came on the scene with the ECM label. I collected ECM recordings in all their MOMA-esque presentation like baseball cards. A lot of it was simply too outside for me, but the rest opened my ears in new ways. I first came across Frisell in his early ECM days, through his work with Eberhard Weber, Jan Garbarek and others, but really didn’t take much note. When Frisell moved to the more world, folk and acoustic oriented Nonesuch in the late ‘80s, it was both the beginning of a long relationship with the label, and a foretelling of something special. It was not until the mid-late ‘90s that I caught up with his work in earnest, and a string of recordings that will make my desert island shelf. “Nashville”, “Gone, Just Like a Train” and “Good Dog (Happy Man)” (the latter, I would have bought on the title alone). These were jazz inflected takes on traditional Americana. His version of “Shenandoah” is simply stunning. A few years later, Frisell would turn out “Blues Dream”, a lopey, brooding piece of Main Street splashed with horns and pedal steel. Oh, then he recorded the title tune on a companion project the same year with jazz giants Elvin Jones and Dave Holland, a super trio if there ever was one. Main Street meet Coltrane’s drummer. Now that’s jazz. 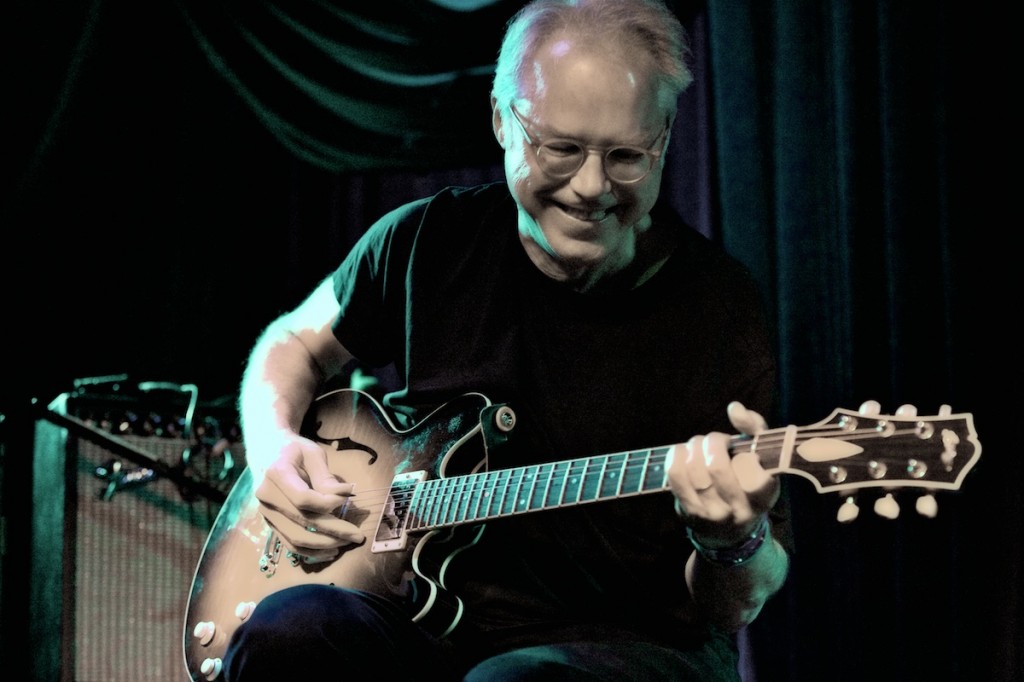 Bill Frisell at The Mint

Frisell stayed with Nonesuch until 2009, but before he left he managed to drop in a project, “Floratone” with drummer Matt Chamberlain, on the Blue Note label.  Loaded with effects and rhythmic grooves, and trademark Frisell shimmer, Floratone birthed a sequel, “Floratone II” released in March of this year on Savoy Jazz. Chamberlain, an esteemed session player with over 200 recordings to his credit, has an envious rock and pop resume including stints with Pearl Jam, Tori Amos, the SNL band and his start with Edie Brickell as a New Bohemian. His playing alongside session legend Jim Keltner, on Brad Mehldau’s, 2001 release “Largo”, is one reason that project was one of the most compelling jazz efforts of the new century.  Radiohead’s “Paranoid Android” in a piano setting was boundary changing indeed. 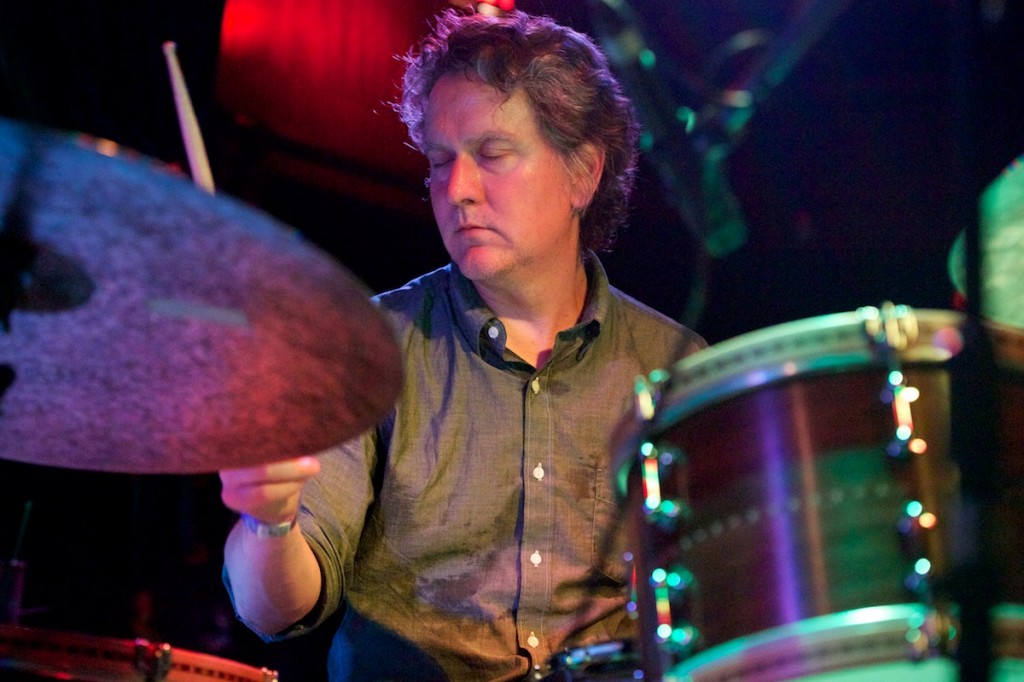 Matt Chamberlain staked a May residency at the Mint, so it was fitting that he would wrap it with Bill Frisell. I have seen Frisell a number of times over the years in comfortable settings such as McCabe’s and the old Largo, and was genuinely excited to hear these two go at it The Mint, an equally intimate venue I know well.  It was clear from the outset on Wednesday that this would be an unscripted evening of improv proportions. Chamberlain’s vintage wood wrapped kit sat stage left, a shallow wood hooped snare (or two), electronics behind. The unassuming Frisell took his seat, and Largo brain trust and multi-instrumentalist extraordinaire Jon Brion emerged from the shadows stage right, providing an unexpected stringed addition. 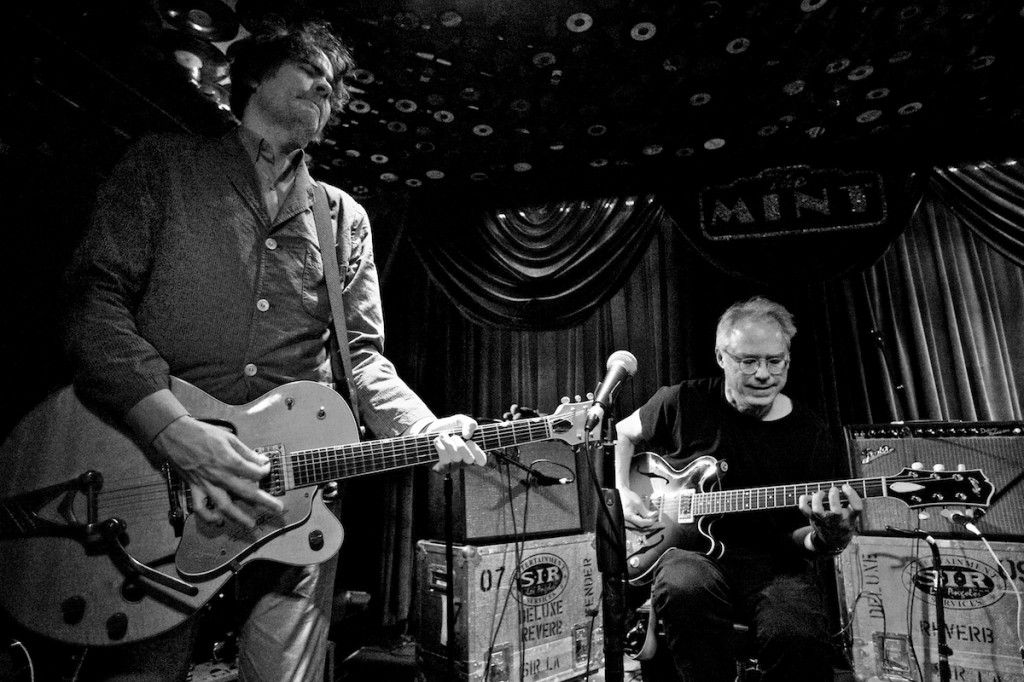 Jon Brion and Bill Frisell, making it up and sounding great doing it

This was a percussion driven affair that served up a very different context than any other Frisell show I’ve attended. As the first piece progressed, Frisell seem to be island, then Eastern influenced, then quickly deconstructing in tones that moved from fuzz to church bells. The players found a place to land before starting another exploration with Frisell and Brion playing the outer edges to the oak like heft of Chamberlain’s groove. Morphing from the fringes to a bluesy feel, then devolving again. Frisell found a “Lay Down Sally” informed country road riff that took the next piece to a fulfilling destination. Well worn, comforting. Chamberlain soon introduced loops and other electronic effects, coupling them with machine gun thrills and blocks of spaces. Reminiscent of Bill Bruford and other jazz-rock fusionists of the highest order. Frisell and Brion were something to behold. Brion squelching with feedback and odd tones from his hollow-body, Frisell shining chimey light and warmth, than turning that on a dime.  Deeper in, Chamberlain brought the percussive equivalent to rummaging through an old drawer. If they weren’t old bells, keys or ashtrays, they were awfully close. As the first set eventually found a way home, there were glimpses of Police-reggae flourishes, a slow string driven gallop that grew wings in a hurry, and some stinging soloing delivered from Brion’s Gretsch. Chamberlain often dampening his strikes on a second snare with a bandana. 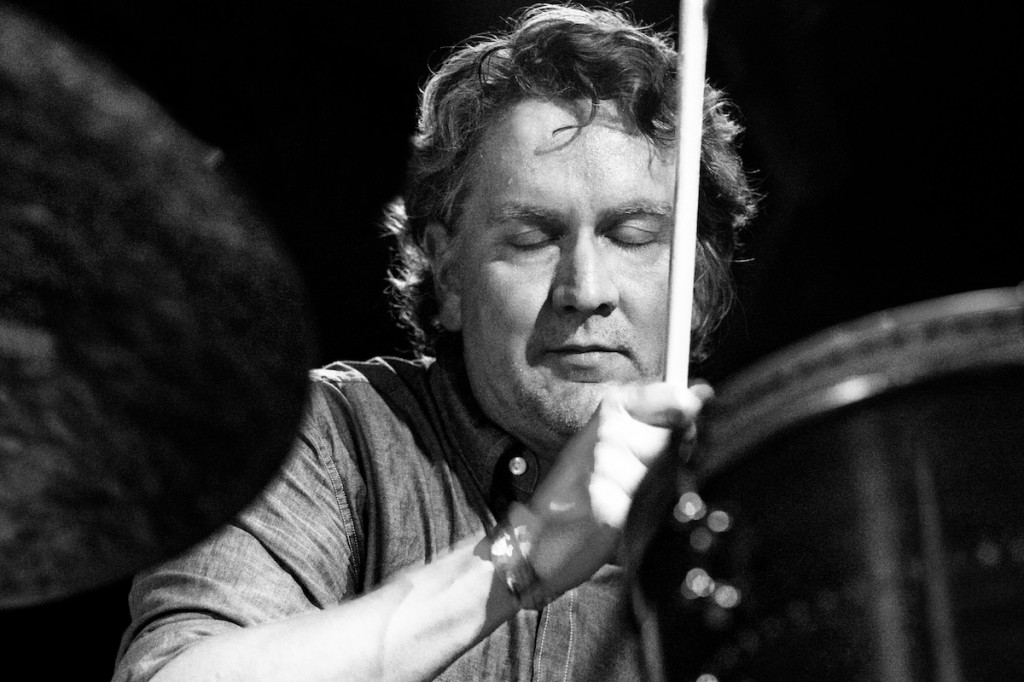 Matt Chamberlain at The Mint

The second set started with Frisell harmonics circling above Chamberlain’s tom heavy attack, that grew to howling beauty. Soon, all three were stirring what I can only describe as a 1971 “Dark Star” informed jam previously thought extinct. Brion wading deep into Garcia space land. Until the whole thing shifted to a country skiffle. Later in the second set, Brion moved to his SG, banging, tapping on top of high fretwork, coaxing sounds like coiled springs. Frisell’s tranquil side shone with a softer ballad textured piece and his interplay with Brion, each interlocked in ascent with the other above just right-for-the-moment hi-hat sprinkles from Chamberlain. The quiet passed with a vengeance, lost in Brion’s SG swagger and Chamberlain’s cowbell. 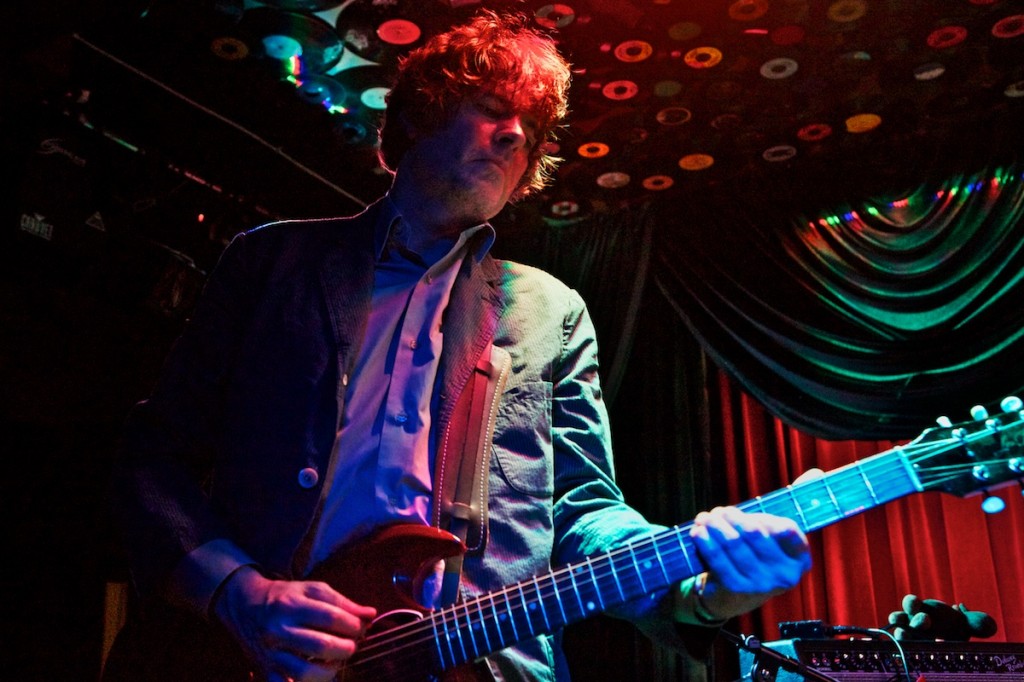 This is music that takes shape, breaks apart, takes another shape, breaks apart. Constantly. The trio never stayed anywhere too long. Without fail, Chamberlain, Frisell and Brion opted for the unfamiliar, rather than nestle in for more than a pit stop. Bearing witness to such creation is a joy, unnerving, and completely rewarding at the same time. But only in the right hands. With musicians this inventive, curious and adventurous, it is snowflake singular. It is here and then it’s gone. Ephemeral, deep, well travelled, but never staying long. Like a blues dream. 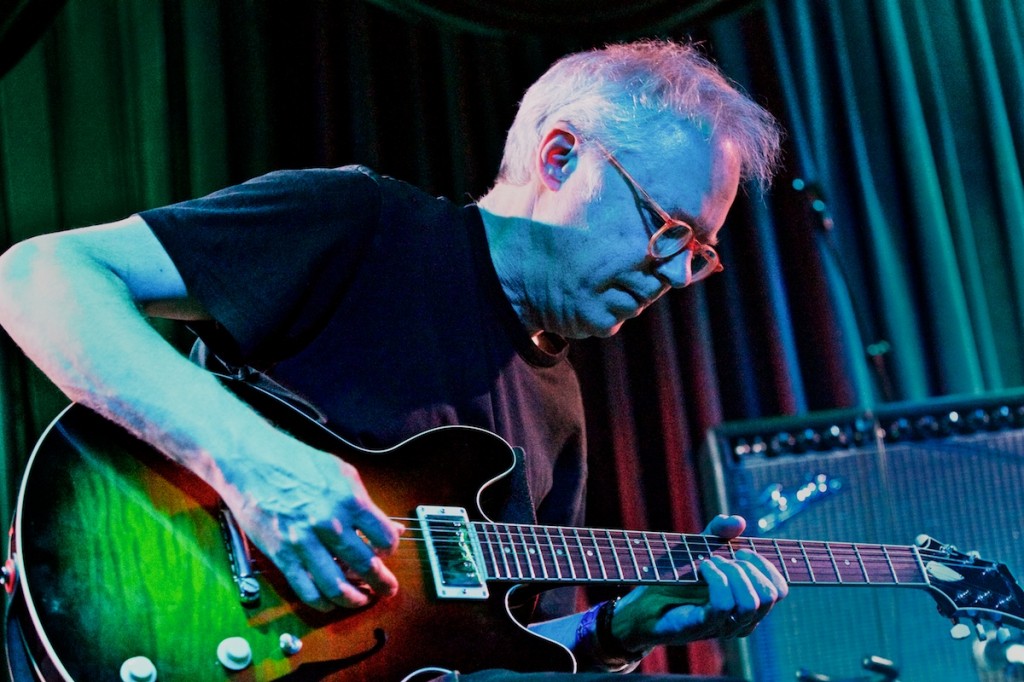 Robert Walter Residency, with the 20th Congress, The Mint
Scroll to top