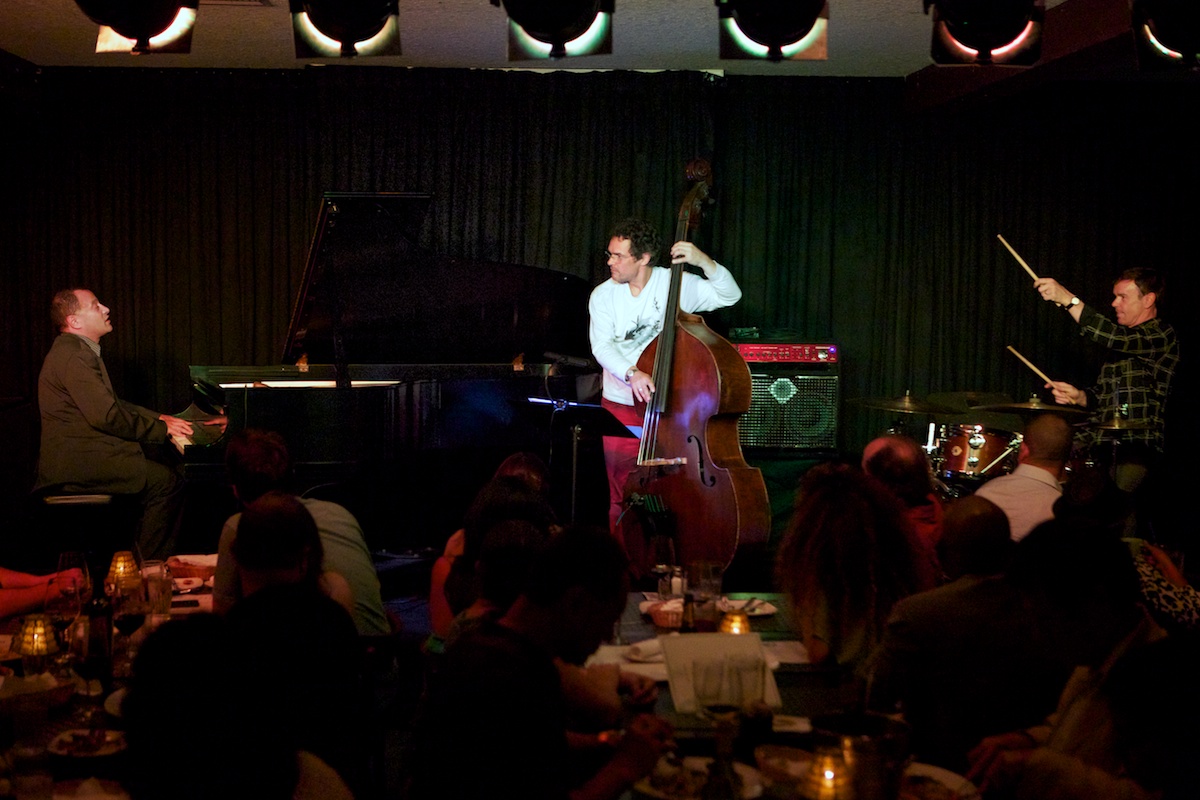 Jazz is constant discovery. Notes become threads, stories become journeys. Artists find a larger audience. Old things are expressed in new and surprising ways. All were elemental to the first of two nights with the Moncef Genoud Trio at Vitello’s. Blind since birth, born in Tunisia, but calling Switzerland home his entire life, he has performed widely throughout Europe, and internationally, his whole career. He is no stranger to the continent’s most important jazz stages, including appearances at Montreux and North Sea. Mr. Genoud’s US performances are special events. 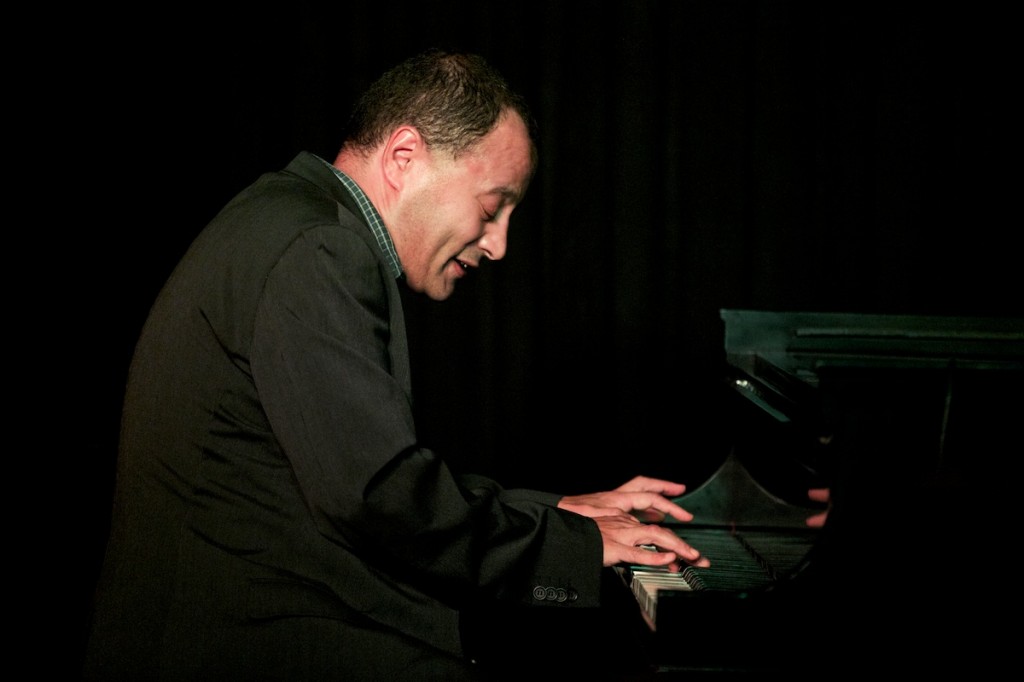 Moncef Genoud performing with his trio at Vitello’s

Mr. Genoud has released 11 studio albums since the late ‘80s , with several distributed through smaller European or Japanese outlets. His last two releases, 2006’s “Aqua” (on Savoy Jazz), and 2010’s “Metissage” (Rollin’ Dice Productions) are a doorway to a remarkable career and talent.  The three covers from “Aqua” (Gershwin’s “Summertime”, Coltrane’s “Moments Notice” and Strayhorn’s “Lush Life”) interpret these compositions with respect and originality (especially “Moment’s Notice” which takes flight under Genoud’s right hand, swinging gently without jumping too high or hard). “Aqua” also features some of the late Michael’s Brecker’s last released recordings. His tenor turns a beautiful companion to Genoud’s compositions (check the climbing and downhill on “Mix of Keys”, classic Brecker). “Metissage” again finds Genoud mixing a few choice covers (including Miles’ “Blue in Green”, Serge Gainsbourg’s “La Javanaise”, and “Diabaram” a Youssou N’Dour and Ryuicihi Sakamoto collaboration) with original compositions. “Chermignon” stands out with a theme at once intimately familiar and totally original. Mr. Genoud cites Evans, Petersen, Tatum, Jarrett, Corea, Hancock and Mehldau as key influences, echoes of which are evident throughout both “Aqua” and “Metissage”. Mr. Genoud is currently working on his next release, one with a very different musical voice, so stay tuned. 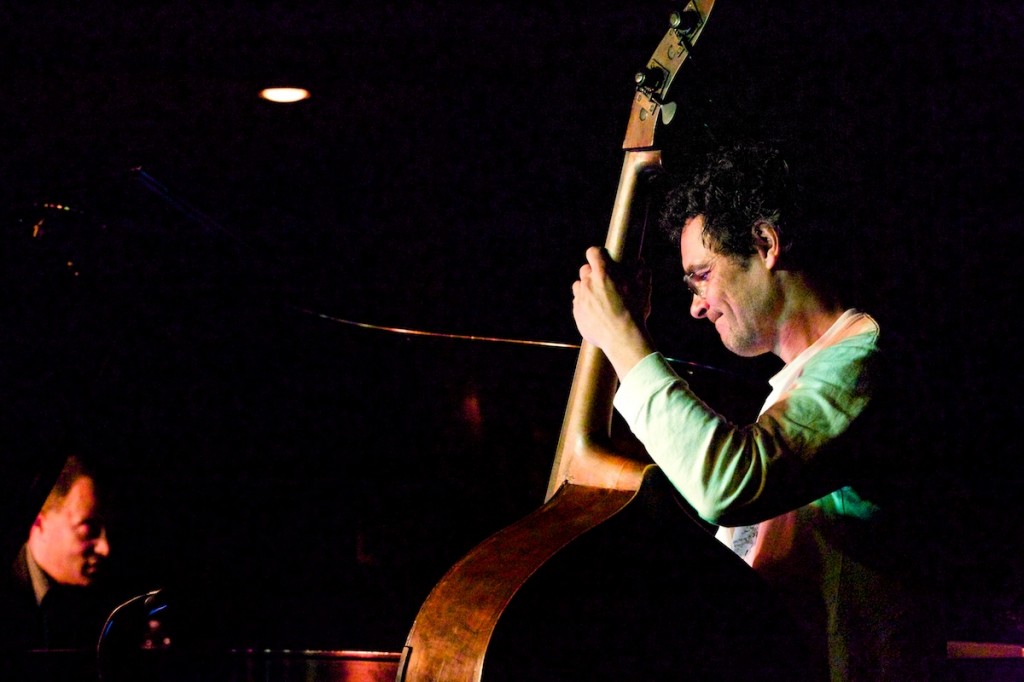 The piano based trio is jazz truth for this photographer/writer. Whether in tender ballad retellings, propulsive bop, new interpretations of old standards or the one foot in the traditional the other in the future approach that marks musicians such as Brad Mehldau, the p/b/d trio reveals all. The players must merge as one, retain their voices and take no shelter. That Keith Jarrett’s standards trio (with Gary Peacock and Jack DeJohnette) is nearing its fourth decade bears witness to such enduring musical excellence. The Moncef Genoud Trio is in keeping with that tradition. 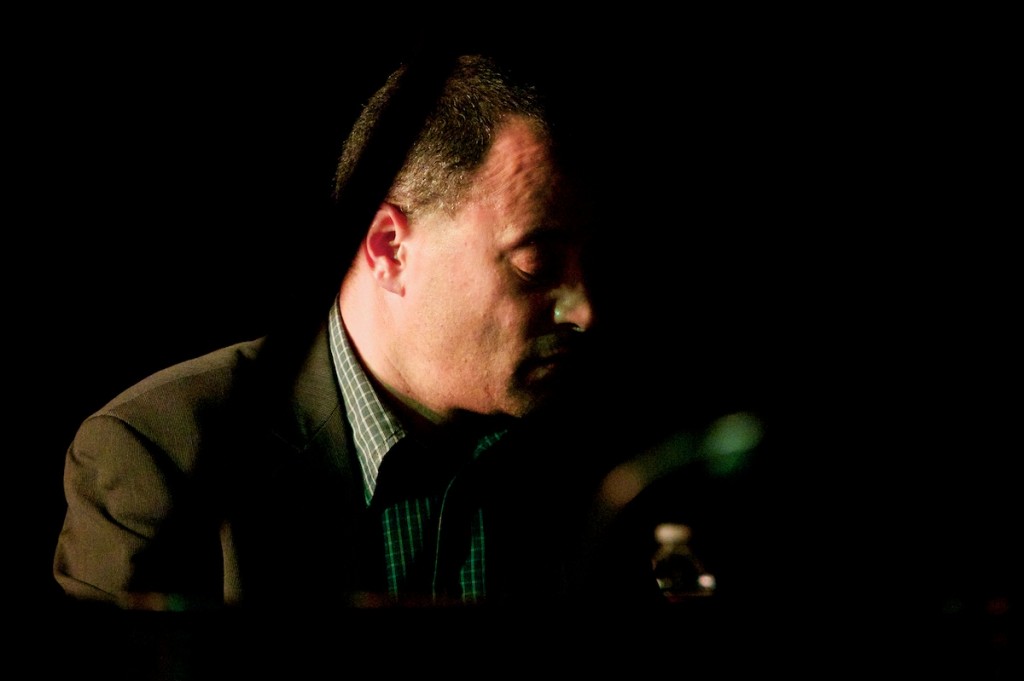 Genoud took the stage at Vitello’s Thursday for his first Los Angeles appearance in six years, accompanied by English drummer Andy Barron (who has played with Kenny Wheeler and John Scofield) and bassist Bänz Oester (who has worked with Michael Brecker and Joe Lovano). Genoud opened with three pieces from “Aqua”. The gently cascading “Out of the Blue” demonstrated a nice ease between players with Oester’s woodsy feel featured early on against Barron’s brushes. “Aqua” found comfortable openings for Genoud to flex the melody with distinctive soloing. “Sliding Shadows”, also from “Aqua” began with Genoud’s string plucked rumblings and Barron’s hand struck snare and quickly picked up steam that took the trio into Jarrett/Mehldau territory on their non-standard days. Throughout the performance, Andy Barron’s taste for cymbal rims and stick ends (and general percussive nuance), seemed in contrast to/keeping with the guy who has a penchant for “bashing various circular objects” according to his MySpace page. 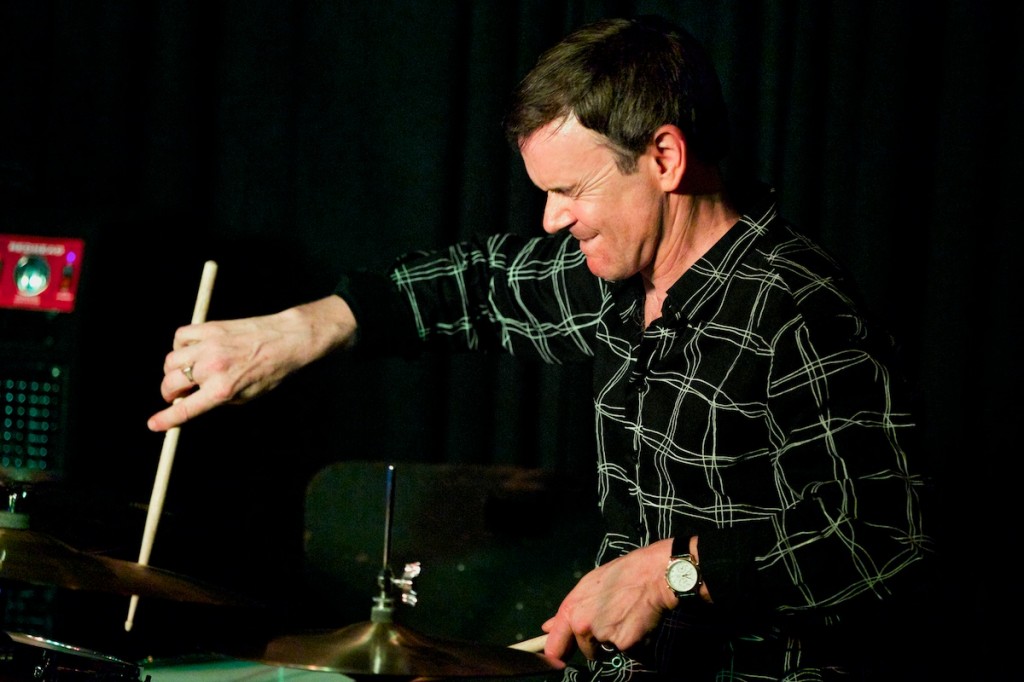 Barron and Oester stepped aside for the Genoud solo piece “Metissage”. The simple theme, and its minor/major, dark/light, low/upper register counterplay, was caringly rendered. Turning feisty, Genoud went at the strings and frame of his grand while vocalizing “Arabic Spring” as an alternative intro to “It’s You” from his fifth album of the same name, and I was struck by the blind musician’s literal feel for the instrument inside and out. The piece took a nice 6/8 turn with echoes of “All Blues”. Genoud’s reading of John Lennon’s “Imagine” brought a hush to the room and was the evening’s highlight. Beginning as a ballad that flirted with a melody emotionally memorized by all, Genoud’s telling ended in bluesy brush driven flourishes. “La Javanaise” followed before the trio brought the echoes of “All Blues” full circle with their own spunky take on the Miles’ classic. The set closed with a cover of Chico Buarque’s “Tu Verras” (originally titled “O Que Sera”) and a satisfying, but relatively brief unnamed encore that capped the 80-minute performance. 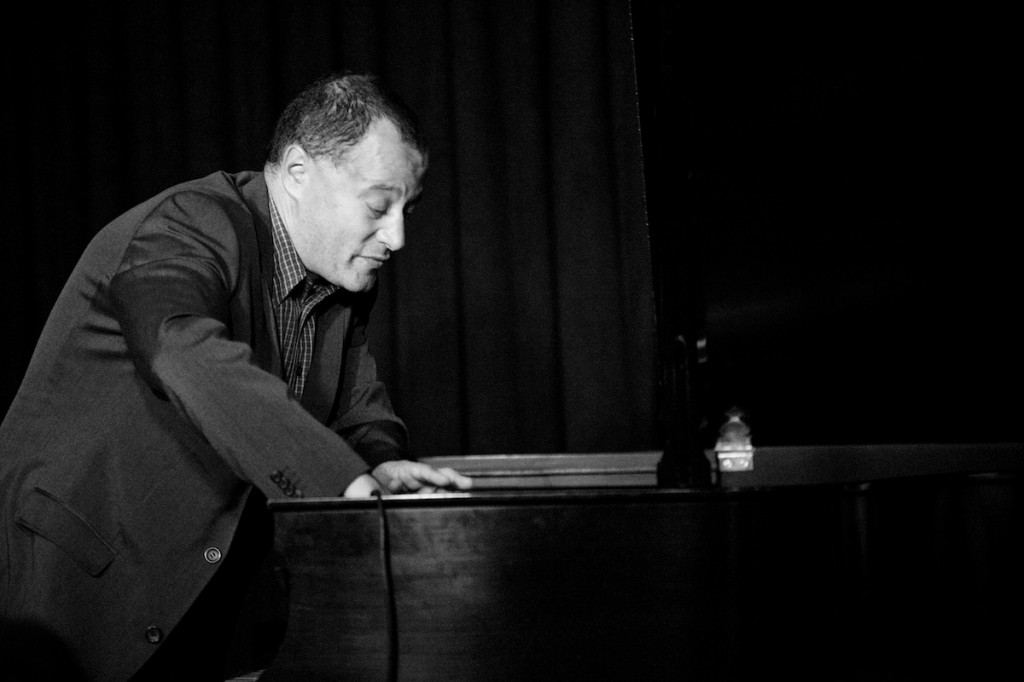 Moncef Genoud works the piano inside and out

Mr. Genoud and C. Chill of Rollin’ Dice Productions have forged a unique musical bond. Chill, a songwriter/producer by trade, first met Mr. Genoud about 10 years ago. Musically self-taught, weaned on funk, but a jazz lover as a teen, Chill took Genoud under his wing to distribute “Aqua” to a wider (e.g., US) audience and a special musical collaboration was born. In speaking with Chill after the performance, his passion for working with Mr. Genoud is evident. It is to the benefit of jazz audiences everywhere that Mssrs. Genoud and Chill found each other. They have much more to discover together. A journey worth taking. 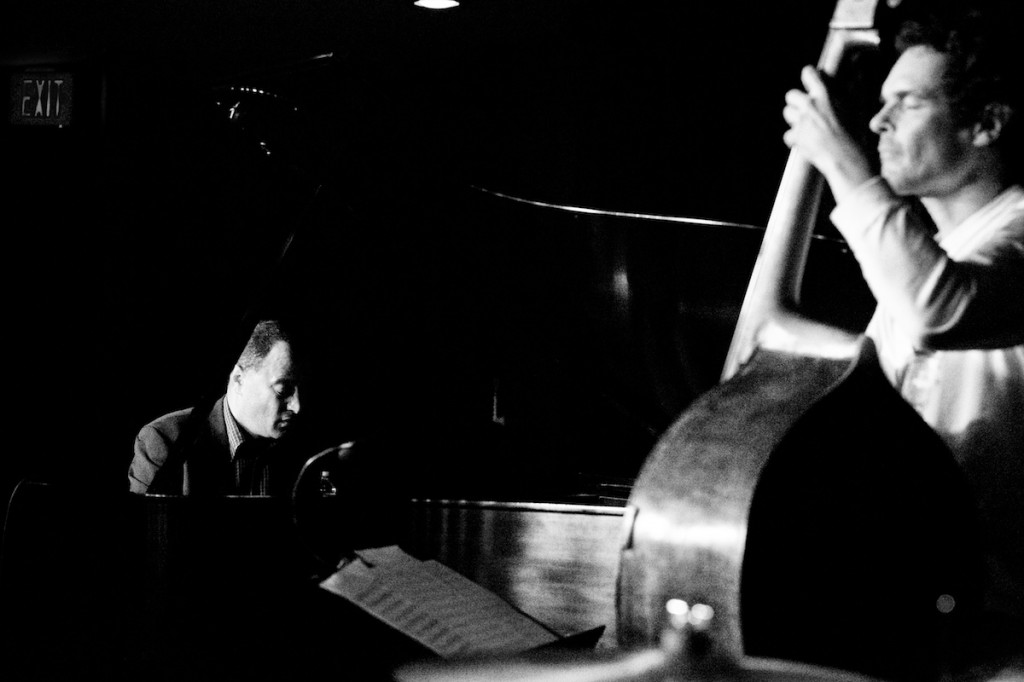