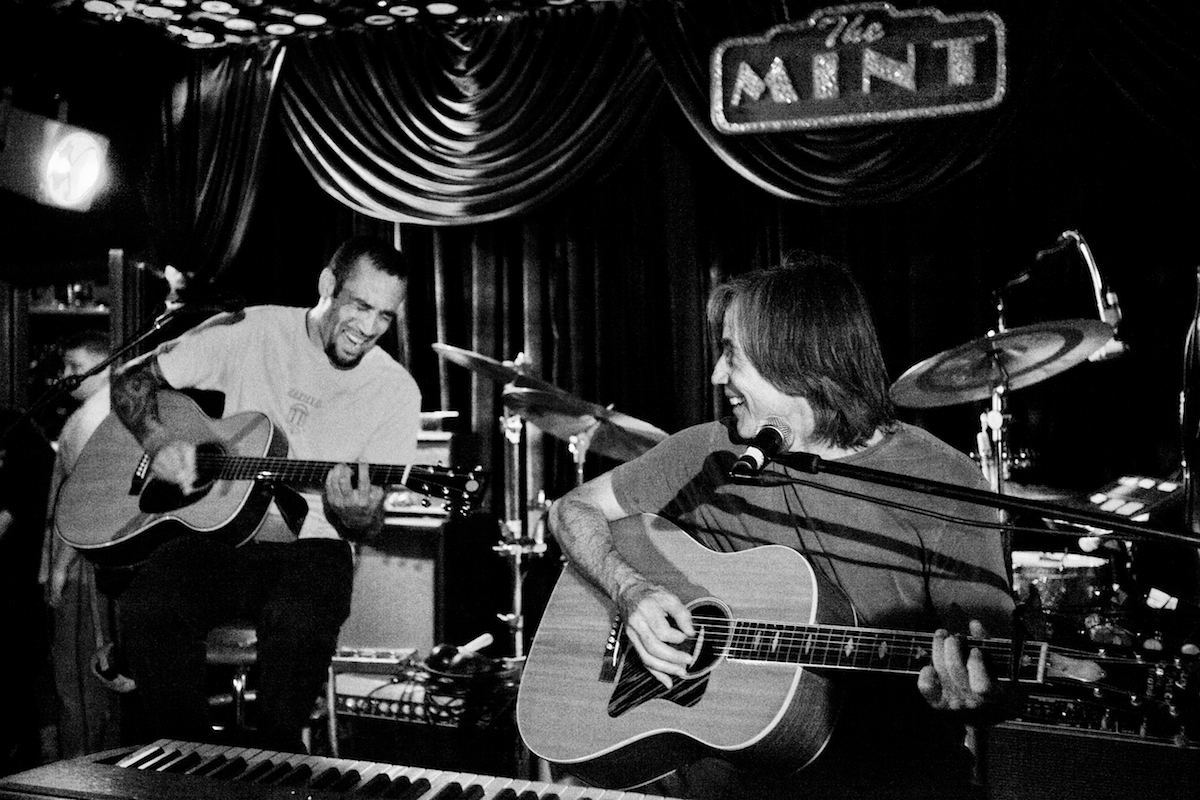 A friend asked me to describe Ben Harper’s sound and the best I could come up with was world-infused, surf-influenced, rhythm, roots and soul.  Harper is a singer/songwriter/guitarist who defies description and has a relentless following (pun intended).  I’ve seen Ben Harper a few times – almost two decades ago in The Mint, when it was half the size and maybe 150 people squeezed in, and then in 2009 before 50,000 some odd headlining the Acura Stage at Jazzfest.  I am a fan, but more from afar, not knowing his deeper catalogue.  That same friend mentioned how influential Ben Harper’s music had been on her high school years, and I felt old, as the rise of this musician from the IE with the Weissenborn guitar that created such a stir is still freshly emblazoned in my musical memory.  Reflecting on the Mint show of the early 90s, I thought the cat who sang “Momma’s Got a Girlfriend Now” (from 1994’s Welcome to the Cruel World) with seemingly straight up truth, then busting out some wicked slide on a lap guitar that looked closer to a dulcimer, was pretty damn cool.  No airs, this one.  That stayed with me. 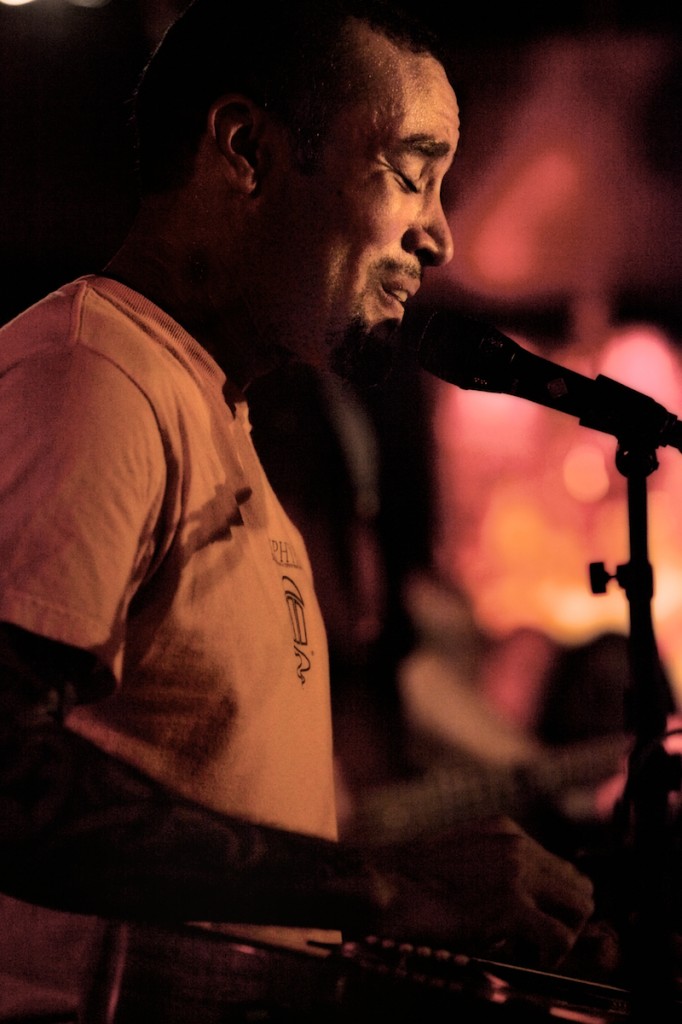 Not long after, the world took notice and Ben Harper was the man.  When I last caught him at the 2009 Jazzfest (with the Relentless 7), he took the stage as an internationally known, two-time Grammy winning, politically inspired headliner and had a huge crowd right there with him.  His contributions to benefit projects and causes reads like a classic moveon.org resume, and that’s not a bad thing – he embodies the social power of music.  And he’s fearless with killer chops, great combo.  Case in point – few could stand shoulder to shoulder with Eddie Vedder covering the Freddie Mercury parts of the classic Queen/Bowie collaboration “Under Pressure”, as Harper did at last year’s Hard Rock Calling Fest in Hyde Park.

True to form, Harper made a very rare club appearance at The Mint, a room he knows very well, to raise money for Babette Ho, the wife of close friend and master surfboard designer Jeff Ho, who is ailing from cancer.  I relished the opportunity to see Harper again in such an intimate setting, coming full circle to the earliest parts of his career.

There was a knowing vibe that portended a special night.  It was no secret by the time doors opened that Jackson Browne would be doing a set before the headliner.  After the Ooks of Hazard (4 ukes + percussion = chimey melodies) warmed the crowd, Ben Harper introduced Tal Wilkenfeld and Jackson Browne to the stage.  Yes, Ms. Wilkenfeld first.  For those who did not catch this monstrously talented bassist touring with Jeff Beck at the tender age of 21 (and projects/appearances with the likes of Chick Corea, the Allman brothers, Prince, Rod Stewart), suffice it to say that Jackson Browne had the low end covered when the two took the stage a little after 10.  Hearing JB play his signature tunes in such a relaxed and intimate setting had many reliving the best of their high school days, they were that much of a soundtrack.  “Doctor My Eyes” (from his self titled debut), a song older than most in the room, never loses its world weary wisdom and showcased Ms. Wilkenfeld with some elegantly creative soloing.  Browne’s “Alive in the World’ (from 1996’s Looking East) soon followed. 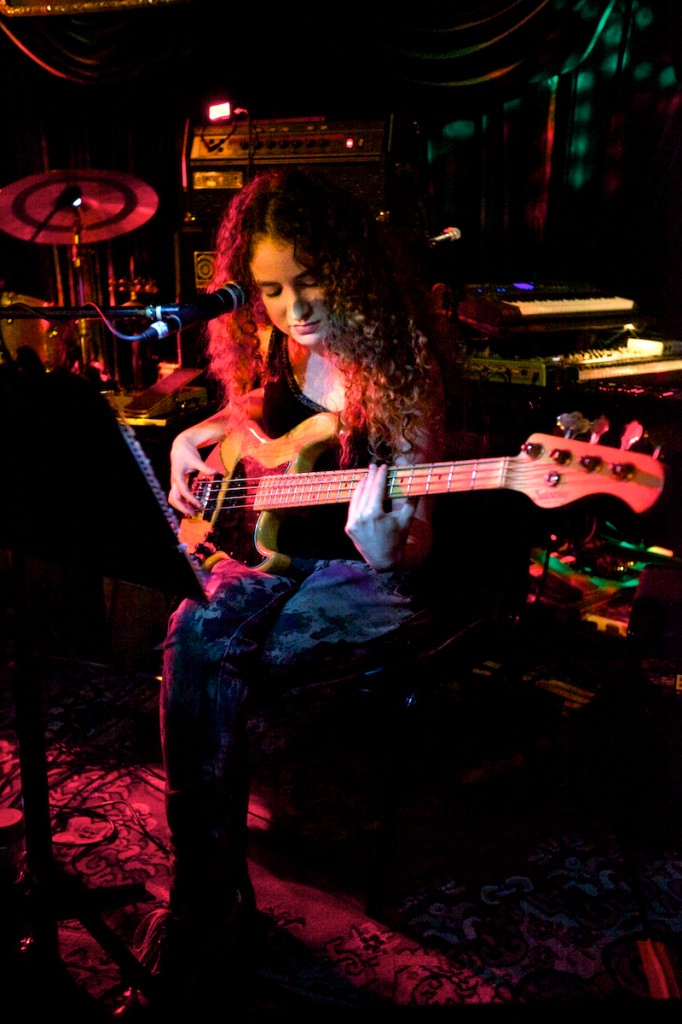 JB expressed a lot of love for Los Angeles and his roots throughout his set, reflecting that  “The Pretender” was written in his Echo Park days – a song that retains poignancy, perhaps even more so in an economy and culture that seem to have completely lost their footing.  This was living room familiarity as demonstrated when JB briefly served as his own keyboard tech by the light of a borrowed Blackberry.  Not your average Hall of Famer.  He then proceeded to cover Leonard Cohen’s  “1,000 Kisses Deep” before Ben Harper joined him for Harper’s “Steal My Kisses” (released as a single in 2000), the audience right there with the feel good chorus. 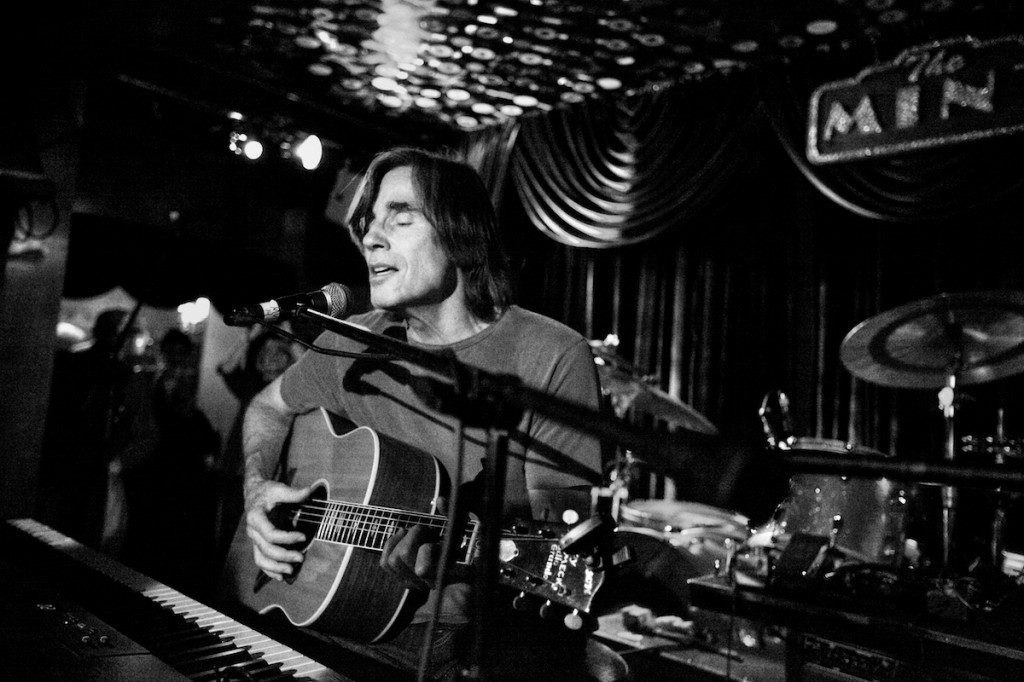 Around 11, Harper and his crew started their set, but not before an expression of thanks for coming together to help Babette and Jeff Ho, and their family and friends.  PLUG: If you surf (which I don’t), buy a Jeff Ho board.  Buy more than one, tell your friends.  It will change your life.  PLUG OVER.

So, here’s a disclaimer.  I wasn’t expecting more than a satisfying night of solid sincere music.  I did not expect to get religion.

Harper launched into a tender take on Van Morrison’s “Crazy Love” with guest Joan Osborne and I was already smitten.  These two brought new/old soul and earth to this classic Morrison tune.  Harper stayed in the same lower key by following with a cover of Springsteen’s “I’m on Fire”.  Then the set exploded with intensity probably familiar to many Harper fans, moving from almost ska-like grooves baked in southern blues to sick Hendrix like runs from his Asher lap steel guitar.  As one fascinated by traditional instrumentation voiced in unique ways, whether it’s Robert Randolph’s sacred steel or even going back to the late Jeff Healey, Harper’s intensity and punch at The Mint was a knockout.  “Diamonds on the Inside” sparkled, indeed.  I love this tune.  Harper followed with a new song “Masterpiece” inspired by Jeff and Babette, slow and touching with the refrain of “loving you is my masterpiece”.  Jackson Browne returned to join Harper again for “Pray that Our Love Sees the Dawn” (from 2011’s appropriately titled, Give Til Its Gone), which they had only played once before on the Letterman show. 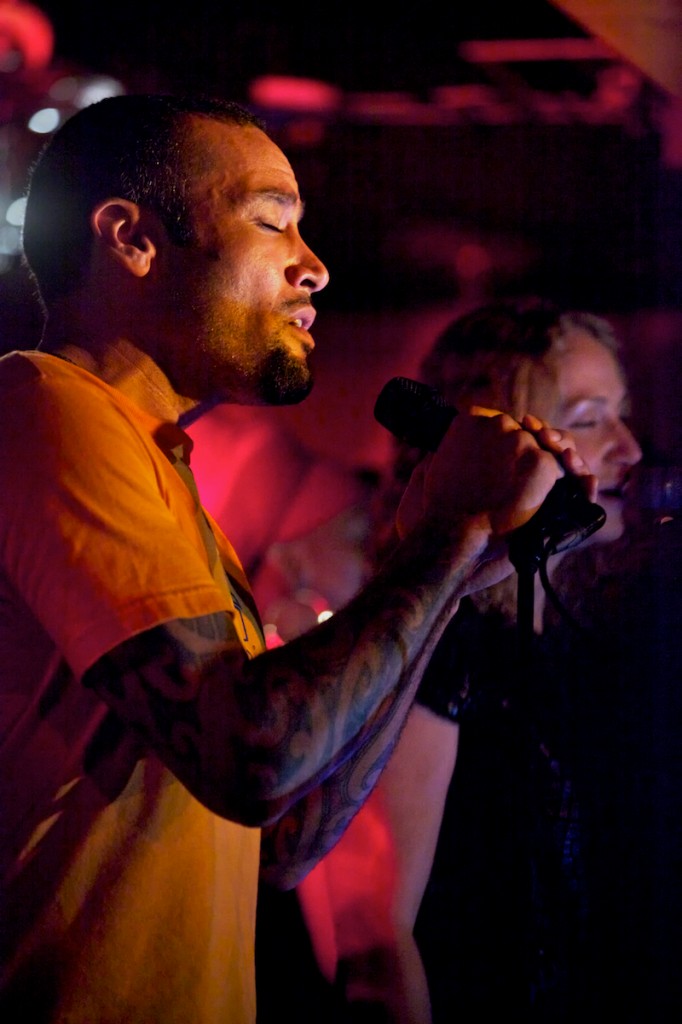 The entire R7 had come out of the gate red-hot and that intensity was reflected especially well with muscular turns by Jessie Ingalls on bass and Jason Mozersky’s sharp and twistedly sonic playing throughout the night.  You know it’s a good night when the audience is at complete attention for the drum solo, especially when in the hands of Jordan Richardson.

“I Shall Not Walk Alone” (from 1997’s “Will to Live”) was full of the burden and beauty imparted by the lyrics.   Well past midnight, Harper then sat alone center stage with his Weissenborn and introduced a song by Neil Young.  His solo take on Ohio was shiver inducing and uniquely Ben’s, some 40 years after Young first wrote it.   “Don’t Give Up on Me Now” (also from Give Til Its Gone) featured more soaring finger work by Mozersky.  As the set moved past 1 AM on a Tuesday morning, Harper had one other guest to bring out.  Tom Morello, in full Nightwatchman mode, and Harper, could not be better suited for each other on Morello’s “Save the Hammer for the Man”.  With that, the house lights went up, but the glow remained. 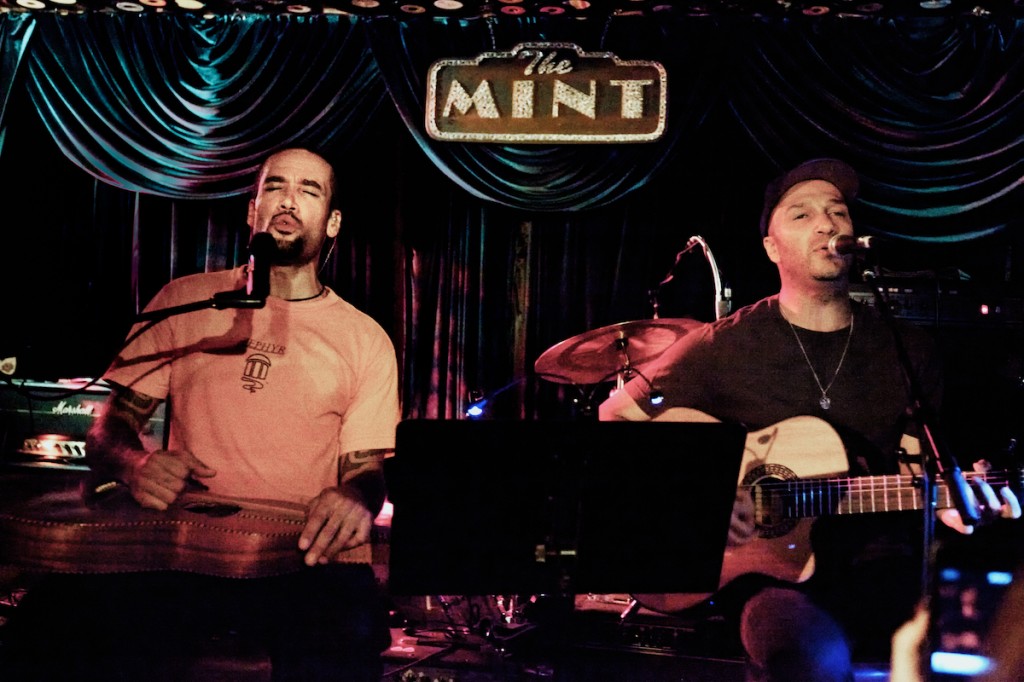 Harper and Morello, meant for each other

The evening would not have been possible without the good folks at The Mint and at Red Light Productions, who ensured that everything ran smoothly and the performers could give it their all without too many distractions.  Much love for The Mint was expressed, especially from both Browne and Harper, and for Harper it is a rousing homecoming from playing Monday nights almost two decades ago.

Earlier in the evening I asked a Claremont local (Harper’s hometown) by way of Kentucky to describe the pull of Ben Harper’s music.  “He writes his emotions, it’s all real.”  After experiencing this set, with its fiery peaks and introspective reflection from beginning to end, I could not agree with her more.  Music matters, life matters, Ben Harper is its witness.  Amen.